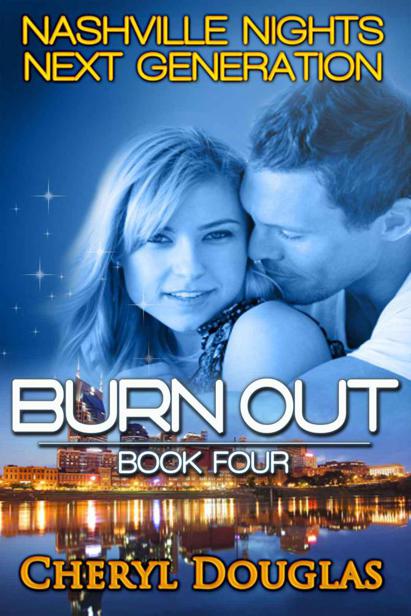 Book Four in the Nashville Nights Next
Generation Series

All rights reserved. No part of this book
may be reproduced, including photocopying, graphic, electronic, mechanical,
taping, recording, sharing, or by any information retrieval system without the
express written permission of the author and / or publisher. Exceptions include
brief quotations embodied in critical articles and reviews.

Persons, places and other entities represented
in this book are deemed to be fictitious. They are not intended to represent
actual places or entities currently or previously in existence or any person
living or dead. This work is the product of the author’s imagination.

Any and all inquiries to the author of this
book should be directed to:
[email protected]

As the President
of Titan Records, Evan Spencer knew he had big shoes to fill when his father,
Luc, retired and awarded him the top spot. Fifty hour work weeks turned into
eighty hours and his girlfriend, Erika, gave him an ultimatum… either he make
their relationship a priority or she’s leaving him. He doesn’t expect her to
follow through on her threat, until she does.

Erika Carlton knew
her ex-boyfriend, Evan, would be at their friend’s wedding in the Bahamas. One
week in a tropical paradise with her ex could be torture. It’s a good thing her
new boyfriend is there to act as a buffer.

Evan has a plan.
He has seven days and seven nights to prove to Erika that he’s willing to do
whatever it takes to salvage their relationship. But when she shows up with a
new man, Evan realizes he’s going to have to step up his plan or risk losing
her forever.

Evan Spencer
walked into his luxury penthouse to find two large suitcases by the door. His
heart did an unexpected flip-flop as he tried to find his voice. “Hey, Erika,
where are you, baby?”

He withdrew the
carefully wrapped box from his pocket. He told himself his girlfriend of almost
six years deserved the expensive diamond necklace he’d bought for her thirtieth
birthday, but even as he selected it and handed over his credit card, he knew
he was just trying to ease his guilty conscience with another meaningless gift
that did nothing to fill the void. As a veterinarian, Erika didn’t wear a lot
of jewelry to work and she’d never been the type of girl to be impressed by
material things. That was one of the reasons he loved and respected her so
much.

She walked out of
the bedroom and his gut twisted when he looked into her eyes. Carefully applied
make-up couldn’t conceal the redness that told him she’d been crying. “I’m
sorry I’m late, sweetheart. I got tied up at work.”

They were supposed
to attend an event for one of his artists at Jimmy’s bar tonight. As the newly
appointed President of Titan Records, these events had become par for the
course. Erika normally didn’t complain, but he knew she was disappointed when
he told her they’d have to postpone her birthday celebration in favor of a
party in someone else’s honor.

“It’s okay,” she
said, gesturing toward the suitcases. “I’ve been busy.”

Evan tried to
swallow the knot of dread threatening to choke him. “I can see that. What’s
goin’ on? What’s with the suitcases?”

He had asked her
to move in with him several months ago when it became obvious if he didn’t do
something to try and salvage their relationship, he would lose her. He couldn’t
let that happen, so he offered what he thought was a reasonable compromise. She
could move in with him so they could spend more time together, only it hadn’t
helped. Work still demanded the vast majority of his time. He rarely got home
before nine or ten at night and usually had to work weekends to meet the
demands of his job. The business required he travel more than he liked, but it
was a given in their industry. His father had done it for years, and their
mother accepted it. He told himself that Erika would as well, if she loved him
as much as he loved her.

She turned away
from him and walked toward the window.

Evan stared at her
a long time, waiting and praying she wasn’t about to tell him it was over. He
couldn’t imagine his life without her. They’d met in college and he’d been in
love with her ever since. When he thought about his future, his life beyond
Titan Records, it revolved around her and the children they wanted to have...
one day. Now he was terrified that day may never come.

When he couldn’t
stand the silence a second longer, he came up behind her and placed his hands
on her shoulders. “What’s goin’ on, sweetheart?”

Erika leaned in to
his chest a second before pushing away. She gripped the window ledge and the
diamond bezel on her watch sparkled.

The watch was
another expensive gift intended to ease his guilty conscience. He handed her
the wrapped box and whispered, “Happy birthday,” in her ear. “I love you.” When
she didn’t say anything, he said, “You gotta know how much I love you.”

She stepped out of
his arms without taking the box. “It’s not enough anymore. We both know that.”

“Don’t,” he
whispered. They’d had this argument so many times over the past year, and he
kept hoping things would get better. His job involved crisis management, and he
loved it, but he kept praying for the reprieve that never came so he could give
his girlfriend the time and attention she had every right to expect. “I don’t
want to argue tonight, not on your birthday.”

“You think this is
what I want?” she asked, looking up at him.

The raw pain he
saw in her bright green eyes tore at him. “Look, I know you’d rather do
something else tonight. Why don’t I see if I can get Ryan to handle this thing
at Jimmy’s? You and I can go and have a nice dinner-”

She glanced at her
watch, its showiness mocking him, reminding him that he really didn’t know her
at all if he thought a gift like that would compensate for the fact he was never
around.

He hated that she
had spent her birthday alone, eating a cold salad in front of the TV, when he
should have been wining and dining her, proving to her that she was the most
important person in his life. “I’m sorry about that, but-”

She held her hand
up. “It’s okay. I’m not looking for any more apologies.” She sighed. “Quite
frankly, I’m tired of listening to them. Tired of pretending things will get
better when we both know they won’t.”

“Don’t say that.”
Feeling more panicked and helpless than he ever had, he could barely draw a
breath. “We can work this out. I know we can.”

She shook her
head. “I let myself believe that for the longest time.” A sad smile crossed her
face. “You don’t know how much I wanted to believe that. Letting go of you and
the dream of being your wife is the hardest thing I’ve ever had to do.”

“You can’t do
this.” There were no words to make her understand what he would sacrifice if
she would just give him one more chance to make up for his mistakes.

“I’m sorry, Evan.”
She reached for his hand. Looking at their joined hands for a long time, she
finally spoke. “You gave me some of the best years of my life, and you’ll
always have a special place in my heart.”

He gripped her
hand tightly, refusing to let go. “This is not over, it can’t be.”

“It’s been over
for a long time,” she whispered, looking up at him as the tears spilled down
her cheeks. “You have a new life now, one that doesn’t include me.”

“That’s not true,”
he said between clenched teeth. “You’re the best part of my life. You always
have been.”

“You don’t have
time for us anymore, and I can’t be with a man who treats me as an
afterthought.” She squared her shoulders and pulled her hand from his. “I
deserve better.”

“I can give you
better if you just give me a chance.”

“I’ve given you so
many chances.” She sighed as she walked to the end table and picked up a framed
photo of the two of them. She ran a fingertip over the glass before brushing
away the tear sliding down her cheek.

He knew she was
right. She’d told him half a dozen times they couldn’t go on this way, but he
fooled himself in to believing tomorrow would be a better day. Now he’d run out
of days to make things better. “Just one more. That’s all I’m askin’ for.
Please. You can’t throw away six years-”

She turned to face
him, effectively silencing him when he saw how much this was hurting her. “I
can’t invest a lifetime in a relationship that isn’t working. I can’t continue
to give my love to a man who has nothing to give me in return.”

Evan sank down on
the couch and dropped his head into his hands, tugging his cropped hair as he
struggled to find the words to heal the pain he’d caused her. “I do love you.
Damn it, why can’t I make you see that?”