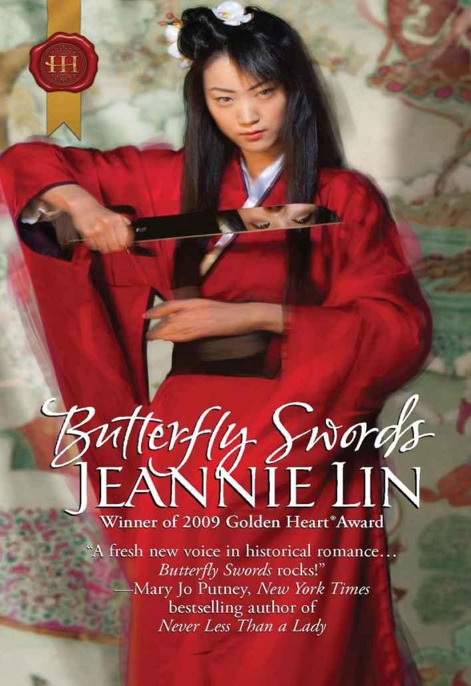 Though he no longer touched her, it was as if the kiss hadn’t ended. He was still so close. Ai Li stumbled as she tried to step away and he caught her, a knowing smile playing over his mouth. Even that tiny, innocent touch filled her with renewed longing.

In a daze, she bent to pick up her fallen sword.

“Now that our bargain is settled—” she began hoarsely, “—we should be going. You said the next town was hours from here?”

He collected his sword while a slow grin spread over his face, and her cheeks burned hot as she forced her gaze on the road ahead.

She had to get home and warn her father. Ai Li had thought of nothing else since her escape, until this blue-eyed barbarian had appeared. It was fortunate they were parting when they reached town. When he wasn’t looking she pressed her fingers over her lips, which were still swollen from that first kiss.

She was outmatched, much more outmatched than when they had crossed swords.

The Tang Dynasty has always held a special lure for me. This was a time when women rose to the highest ranks as warriors, courtesans and scholars. Anyone with the will and the perseverance to excel could make it. The imperial capital of Changan emerged as a cosmopolitan center of trade and culture. The most famous love stories, the most beautiful poetry and the most elegant fashions came from this era.

The Silk Road which connected East to West was at its height during the eighth century and the empire embraced different cultures to a greater extent than ever before. I wanted to know what it was like to wear silk and travel to the edges of the empire during this golden age. And I wanted sword fights!

When
Butterfly Swords
was awarded the Golden Heart
®
2009 for Historical Romance, I was overcome. It was a dream come true to receive recognition for writing a story that encompassed everything I loved.

In
Butterfly Swords,
you’ll find historical fact and a little fantasy, of course. I hope you enjoy the drama and sensuality of the Tang Dynasty as much as I do.

This is Jeannie Lin’s debut novel for Harlequin Historical, but look for

The Taming of Mei Lin

a Harlequin Historical Undone! eBook that links into

and is available now.

“In
Butterfly Swords,
Jeannie Lin tells a classic tale of courage, adventure, and impossible love—and she sets it in a fascinating new world: Tang China, where a warrior princess must fight for her family and her country with only a barbarian swordsman to help her. Jeannie Lin is a fresh new voice in historical romance, and
Butterfly Swords
rocks!”

“A delightful story of princess and barbarian!”

“Swords, warrior princesses, and a barbarian to love!
Butterfly Swords
was a delight!”

To my little sister Nam, my “evil” twin, my ideal reader—Thank you for the tough love, for telling me which darlings to kill, for reading all the ugly drafts, for everything. I made a promise to dedicate my first book to you, and here it is—more than twenty years later.

Heartfelt thanks to my agent, Gail Fortune, for her stubborn dedication. To Anna Boatman and Linda Fildew for making this story even bigger and better. And to Barbara, Elaine, Dana and Kay for all the love and guidance.

T
he palanquin dipped sharply and Ai Li had to brace her hands against the sides to stay upright. Amidst the startled cries of her attendants, the enclosure lurched again before crashing to the ground with the splintering crack of wood. She gasped as the elaborate headdress toppled from her lap and she was thrown from her seat. A tight knot formed in her stomach, and she fought to stay calm.

What she heard next was unmistakable. The clash of metal upon metal just beyond the curtain that covered the wedding sedan. Sword-strike, a sound she woke up to every morning. With her heart pounding, she struggled to free herself from the tangle of red silk about her ankles. This skirt, the entire dress, was so heavy, laden with jewels and a hundred
li
of embroidery thread.

She fumbled behind the padded cushions of her seat, searching frantically for her swords. She had put them there herself, needing some reminder of home, the way another girl might find comfort in her childhood doll.

Her hand finally closed around the hilt. She tightened her grip to stop from shaking. From outside, the sounds of fighting grew closer. She ignored the inner voice that told her this was madness and pulled the swords free. The short blades barely fit in the cramped space. She had no time for doubt, not when so much was at risk. With the tip of one sword, she pushed the curtain aside.

A stream of sunlight blinded her momentarily. The servants scattered like a flock of cranes around her, all posts abandoned. Squinting, she focused on the hulking figure that blocked the entrance and raised her blades in defence.

A familiar voice cried out then,
‘G

Old Wu, the elder lieutenant, rushed to her while she faced the stranger. Her armed escort struggled against a band of attackers. In the confusion, she couldn’t tell who was who.

Wu pulled her behind the cover of the palanquin. The creases around his eyes deepened. ‘
G

She stared at the thugs surrounding her. Wu had been a bit too successful at finding men to pose as bandits.

‘There are clothes, money.’

Wu spoke the instructions and the head ‘bandit’ grabbed on to her arm. Instinctively, she dug in her heels to resist him. Everything was unfolding so quickly, but she had known there would be no turning back.

The stranger relaxed his grip, but did not release her. An act, she reminded herself, fighting the panic constricting her chest.

‘There is no more time,’ Wu pleaded.

‘Your loyalty will not be forgotten.’

She let herself be pulled through the trees, stumbling to keep up with the ragged band. Who were these men Old Wu had enlisted? When she looked back, he was standing beside the toppled sedan, his shoulders sagging as if he carried a sack of stones. The secret he’d revealed to her two days ago weighed heavily on her as well. Ai Li hoped that she could trust him.

God’s teeth, the scent of cooking rice had never smelled so sweet.

Ryam’s stomach clenched as he stared across the dirt road. An open-air tavern stood empty save for the cook stirring an iron pot over the fire. The establishment was little more than a hut propped up in a clearing: four beams supporting a straw-thatched roof. Bare wooden benches offered weary travellers a place to rest between towns and partake of food and drink.

Travellers with coin, of course. The only metal Ryam had touched in months was the steel of his sword. He was nearly hungry enough to eat that.

The proprietor perched at the entrance, whip-thin and wily in his black robe as he stared down the vacant trail. Nothing but wooded thickets in either direction. A single dirt road cut through the brush, leading to the stand.

Ryam pulled his hood over his head with a sharp tug and retreated into the shade. He was too big, his skin too pale, a barbarian in the Chinese empire.
Bái gu

He wrestled with his pride, preparing to beg if he had to. Before he could approach, a mottled shape appeared in the glare of the afternoon sun. The proprietor jumped into motion and waved the newcomer into the tavern.

nyíng,’
the proprietor gushed. His head bobbed as he bowed and bowed again.

Four men followed the first traveller inside and tossed their weapons with a clatter onto the table. Their presence forced Ryam back beneath the branches. A heartbeat later, he realised what was bothering him. That was no man at the centre of this rough bunch. Not with hips that swayed like that. He was wrong about many things, but there was no mistaking the instinctive stir of his blood at the sight of her.

The woman wore an owl-grey tunic over loose-fitting trousers. A woollen cap hid her hair. With her height, she could have passed for a lanky youth. She affected a lofty confidence as she addressed the proprietor. Behaviour appropriate for a male of superior status.

Ryam knew the rules of status. As a foreigner he was the lowest creature on the ladder, a hair above lepers and stray dogs. It was one of the reasons he skirted the back country, avoiding confrontation. The promise of a hot meal had tempted him into the open. The sight of this woman tempted him in another way. Beneath the formless clothing, she moved with a fluid grace that made his pulse quicken. He had forgotten that irrational pleasure of being distracted by a pretty girl. Blind masculine instinct aside, the determination with which she carried on with her ruse made him smile.

He wasn’t the only one paying such careful attention to her. The proprietor cast a scrutinising glance over his shoulder while he spoke to the cook, then donned his previously submissive demeanour as he returned to the table, balancing bowls of rice soup on a tray. Apparently, the woman overestimated the effectiveness of her disguise.

The proprietor set down the last bowl before his customers, then looked up. His mouth twisted into a scowl the moment he saw Ryam across the road.

‘Away with you!’ He strode to the edge of the stand. ‘Worthless son of a dog.’

Ryam let his hand trail to the sword hidden beneath his cloak. He had become a master at biting his tongue, but today the sun bore into him like bamboo needles and the ache in his belly felt all the more hollow. Under normal circumstances, he wouldn’t think to use his weapon against this fool, but he seriously considered it as the verbal abuse continued. It was like being pecked to death by an irate rooster.

He gritted his teeth. ‘The old man does not own this road,’ he muttered.

At least he hoped he said that. All the years on this side of the world and the only phrases he had at his command were bawdy insults and a smattering of pillow talk.

The rooster ducked inside, only to re-emerge with a club bigger than his arm. Ryam straightened to his full height with a warning growl. From her seat, the woman craned her neck at the disturbance. The men around her turned in unison. The four of them pinned him with their cold stares. He was making a wonderful impression.