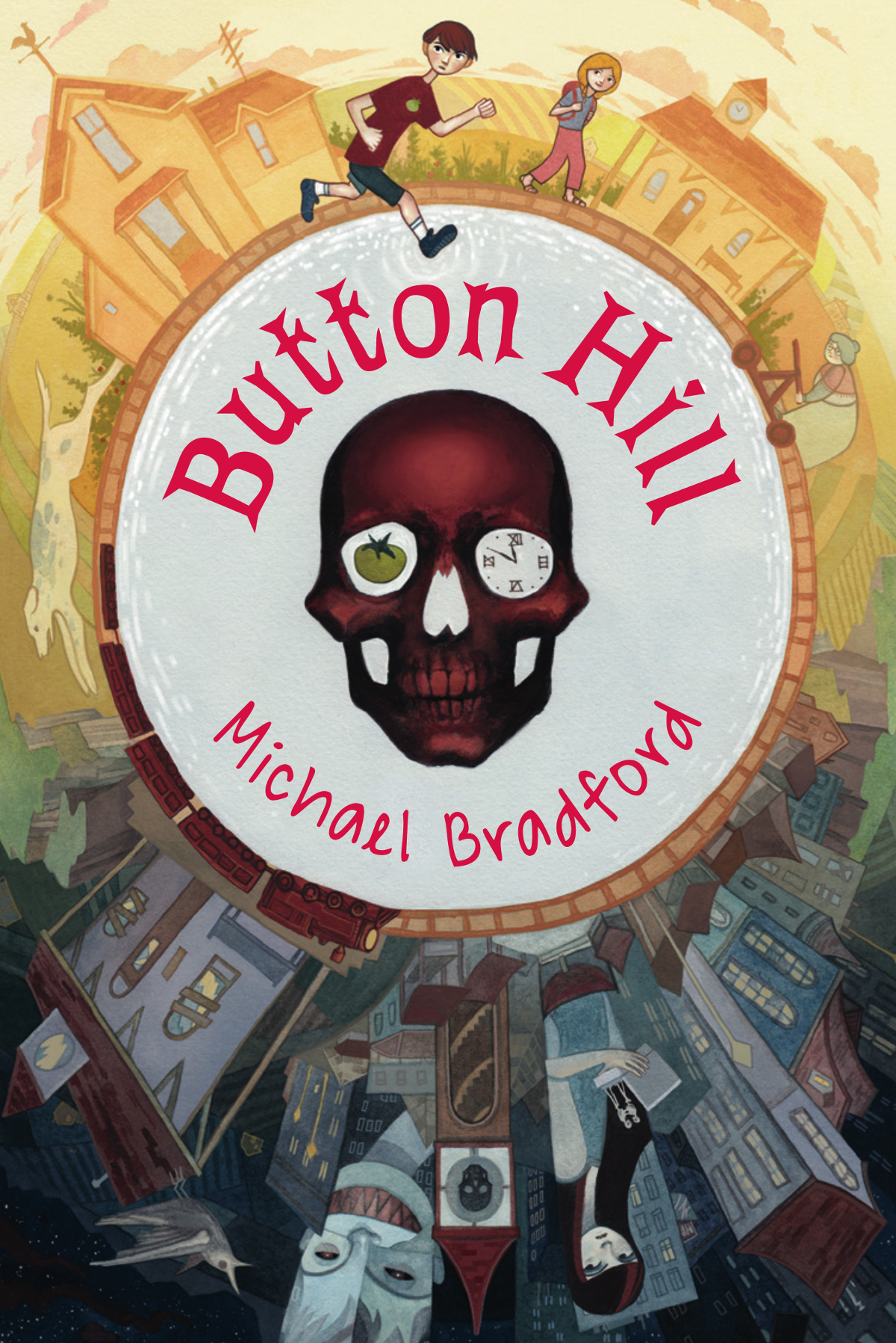 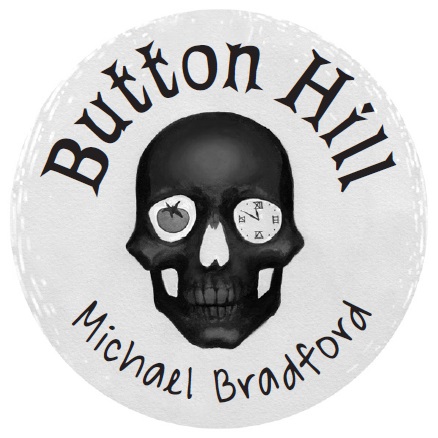 Summary:
Dekker must rescue his younger sister when she goes missing in the mysterious Nightside world of Button Hill.

To my family and friends

As soon as he saw the worn wooden door in the basement, Dekker smiled. He knew he had found something his little sister would hate.

The basement smelled of damp cement and rotting potatoes. Boxes were jammed everywhere. A heavy wooden desk stood in one corner, and an antique phone with two bells on top hung on the wall beside an ancient washing machine.

The house belonged to Dekker's great-aunt Primrose, and so far the old lady was the worst part of staying on Button Hill. He still didn't really understand why he and his sister, Riley, had to be there.

Dekker had been sent down to put away his mom's empty suitcases in the basement, and that was when he'd noticed the rough-looking sliding door at the far end. Dekker unhooked the latch that locked it, and it squealed along its rail as he eased it open. Cold air breathed up from the other side. Stone steps led downward, as if there were a dungeon below the house. A hiding placeâthis could be fun, he thought.

Dekker knew he was alone, but still he scanned the basement to make sure no one was watching. He crept down the narrow steps.

At the bottom was a small, dirt-floored room. A single lightbulb hung from a rusty hook in the ceiling and cast a thin yellow light. Something tall and skinny draped in a white sheet stood in one corner. Dekker saw glass jars on the shelves that lined the walls, some cloudy with dark liquids, some full of seeds or powders. Set into the center of the floor was a circle of stacked-up stones, supporting a heavy-looking wooden hatch about three feet across. Two rusted bands of metal held the ash-colored planks together. He tried to pry the hatch loose, but it wouldn't budge.

Dekker thought he heard the tall thing under the sheet make a noise. It was a quiet sound, like a click or a tap. Curious, he pulled back the dusty sheet. There stood a grandfather clock that reached nearly to the ceiling, now silent and still. Its ebony cabinet was shaped like a casket. A pair of large skeletal hands at the top supported a round, open clock face that revealed tiny cogs and wheels behind it. At the center of the clock face, instead of hands and numbers, was a black skull set into a serrated metal disk. Dekker peered through the open front and thought how much fun it would be to take the clock apart.

“Young man, how long do you intend to stand there?” The huge shape of his great-aunt filled the entrance to the cellar behind him. She stepped toward him, and her flinty eyes narrowed to slits as she inspected him.

Something he had heard his mom say a long time ago sparked in the back of Dekker's brain. “Is that the same clock from when Mom was a kid?”

The old lady crossed her arms. “I'm surprised your mother told you about it. But yes, it is a priceless family heirloom. It hasn't run in decades. A child with manners would know not to touch such a thing without permission.”

The old lady drew a cloth from her apron and polished the skull in the center of the clock face. “Some things still have value, even if they no longer fulfill their original function. Your function at this time is to unpack your belongings, as your mother and sister have already done.” She flung the white sheet back over the clock, then went up the stairs without waiting for Dekker.

“I was just checking things out,” muttered Dekker. He crouched to examine the surface of the hatch in the floor and sucked in his breath as a jagged splinter of wood bit into the tip of his finger. Absently, he pressed the puncture and watched the blood drip onto the hatch. The parched gray boards swallowed it up.

When he got back upstairs, Dekker found his mother peeling potatoes at the kitchen sink.

“What's the deal with that secret room under the basement?” he asked her.

“It's where Aunt Prim keeps apples and vegetables and other things from the garden over the winter. Or she used to. There's a chute somewhere near the side of the house. When my brother and I spent time here as kids, we'd drop the potatoes and carrots down. She'd have us bury them in a sandpit to keep them cool and dry. There were fresh vegetables all winter in a good year. Carrots got a bit soft by March though. We used to say eating them was like nibbling on Aunt Prim's fingers.”

“That's gross, Mom, seriously. What about that door in the cellar floor?”

She shot him a stern look. “That's the old well. It ran dry years ago. Don't even think about it.”

“Aunt Prim says I'm not supposed to touch the creepy clock that's down there either. I'm not allowed to touch anything around here.”

His mother frowned. “I didn't know she still had that old thing.”

Dekker nodded. “Why would Aunt Prim want a clock with a skull on it? Did she join a motorcycle gang?”

His mom shrugged. “It's been in the family forever. And your aunt's right,” she said, turning toward Dekker and waving the potato peeler at him. “I don't want you playing with it either. That clock is down there for a reason. Just leave it alone.”

“Why?” asked Dekker. “Is it cursed or something?”

His mother laughed. “Don't be silly. It doesn't work anymore, and it gave my brother and me nightmares, so Aunt Prim put it out of sight.”

She tossed a potato to him, and Dekker caught it. “What's this for?”

“It's for supper. Aunt Prim is cooking a nice dinner for us. You can peel it.”

“Aww, do I have to? She doesn't even want us here anyway.”

“Of course she does. Why would you say that?”

He shrugged and looked away. “No reason except her extreme grouchiness. Maybe it's her superpower.”

His mother looked at him with concern, her eyes tired. “Well, it'll get better, I hope. It's just one potatoâit's not going to kill you.”

He peeled it, then wiped his hands on his shirt as he left the kitchen and went up to his room. His sister flung open the bedroom door a second after he closed it and bounded into his room. “I can't believe we're finally here!” said Riley while she did a little dance at the foot of his bed. “Did I scare you that time?”

Dekker sighed and pushed his hair out of his eyes. “The door was closed for a reason. You're supposed to knock before you come in.”

“Uh, no. This house is a hundred years old. I heard the floor creaking before you even came in.”

“Darn it.” Riley looked up at her brother, her green eyes sparkling. “I bet there's a secret room somewhere or something!”

Dekker flopped out on the bed and said, “Yeah, but Aunt Prim wouldn't let us go in it anyway. Plus, there's no
TV
here, no Internet, and it smells weird. It sucks.”

“I think Auntie's going to be fun!”

“She's super strict about manners and stuff. Keep your distance if you want to stay out of trouble.”

“I bet out back there're barns and tractors and, like,
old
stuff!”

“If you like old stuff so much, why don't you go hang out with her then? You'll see how
cool
Aunt Primrose is.” Their dog, Ranger, padded into the bedroom and rolled over on his back between them. “Your turn to scratch his belly,” Dekker said. “I'm busy.”