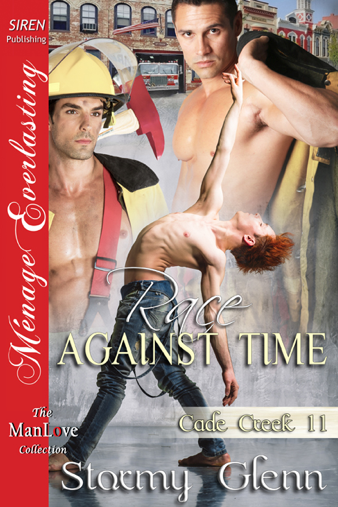 Racine Tuff just wanted to get back to the safety of Cade Creek. With a date gone wrong and a psycho hunting him, being safe seemed like a dream. When he's met at the airport by a couple of sexy firemen, trusting them is easier than he thought it would be, but is his trust misplaced?

Ari Kadin has always known his desires were odd even for a gay man, or so he thought until he falls for another fireman. Vinnie convinces him that his desires are perfectly normal. Still hesitant, Ari doesn't know what to make of the instant desire he feels for the abused man they pick up from the airport. Race comes with dangers that threaten all of them. Is having his dream relationship worth losing what he already has?

All art and logo copyright © 2016 by Siren Publishing, Inc.

If you have purchased this copy of
Race Against Time
by Stormy Glenn from BookStrand.com or its official distributors, thank you. Also, thank you for not sharing your copy of this book.

“Race,” Dorian James replied, “you never have to ask if you can come home.”

Racine Tuff swallowed to hide the tears of relief clogging his throat. He was terrified if he didn’t leave the city in the next few days, he would show up on the obituary page of the local newspaper. His ability to hide was fading with each passing second.

“I might need some help.” Race grimaced as he glanced down at the stitches in his arm. Hell, he needed a lot of help. Not even during his time as a member of the Dirty Dozen Motorcycle Club had he needed so much help, and they had been wanted for questioning for numerous crimes in several states.

The lump was back.

“I just need to come home, Dorian.” Race tried to keep the quiver building up inside of him out of his voice. God, he wasn’t sure what he would have done had Dorian said no.

It wasn’t like Race really needed Dorian’s permission to go home, but it wouldn’t hurt. Race had been following the man for a long time. Even if the motorcycle club had been disbanded over a year ago, Race still felt the need to have Dorian’s support.

“What can I do to help?” Dorian asked.

Race’s shoulders slumped. His relief was so great, he felt woozy. He swallowed again to clear his throat. “I need some money for a bus ticket. It shouldn’t cost more than a hundred dollars or so.” Assuming he didn’t eat for the next three days. “I’ll pay you back just as soon as I can. Promise.”

“Fuck that,” Dorian snapped. “Get to the airport. I’ll have a ticket waiting for you at the Delta Airlines counter.”

Tears sprang to Race’s already tired eyes. “You don’t have to—”

“Just get to the airport, Race.”

Race couldn’t help smiling at the strength in Dorian’s voice. The tone brooked no argument. It was the same tone he had heard several times when he had been a member of the man’s motorcycle club. “Yes, sir.”

“It’s going to be okay, Race,” Dorian said. “Whatever is going on, we’ll help you get through it.”

Race wished it was that simple. “Yes, sir,” he said anyway, knowing a reply was expected.

“Just get to the airport, Race.”

Race blinked rapidly to dispel his tears when Dorian hung up the phone before turning to hand the phone back to the nurse. “Thank you.”

“Are you sure you’re going to be okay?” the kindhearted nurse asked.

“Yes. I just have to get to the airport. My friend said he would have a ticket waiting for me.”

Race appreciated the nurse’s concern, but she had already let him use her phone and he didn’t want to be beholden to her. Besides, the public transit system went to the airport. It might take longer than a taxi, but it would still get him there.

The frown the nurse gave him said that she clearly didn’t believe him. There was nothing Race could do about that. He wasn’t going to take her money and he only had what his friends at the ballet school had been able to throw into a hat on the spur of the moment. He had nothing but the clothes he wore and a small backpack full of items he'd had at the dance school before his world imploded. Everything else was gone, destroyed or stolen.

Race looked up when his friend John Aldrin Flores came rushing into the exam room, his latest boy toy reluctantly following behind him. Race was sure the guy—who he had yet to meet, as the man had been dating Aldrin all of a week—would have preferred to be anywhere else. Race sure would have.

Race turned his face away when Aldrin looked like he was going to try and touch him.

“Something needs to be done about that man.” Aldrin’s eyes narrowed. “He needs to learn that no means no.”

“I’m going home, Aldrin.” Just saying the words lifted some of the pressure weighing Race down. He couldn’t wait to be back in Cade Creek, where it was safe. “Dorian is arranging to have a plane ticket waiting for me.”

"What about ballet school?"

Race shrugged because voicing his heartbreak over having to leave school would have him in tears. It broke his heart to think he couldn't finish school. Dancing was his dream. Staying alive beat out the dream.

“Do you need a ride?” Aldrin asked.

Race started to smile, but then winced when the movement tugged on the corner of his split lip. “No, I’m good. As soon as they are all done with me, I’m just going to catch a cab to the airport and wait until my flight takes off.”

“Don’t be ridiculous,” Aldrin said. “We’ll give you a ride.”

Race glanced at the man in the doorway. He swallowed tightly at the scowl on the man’s face. “I don’t want to be a bother—”

Aldrin patted his hand. “Honey, you could never be a bother.”

“He said he was fine, John,” the guy in the doorway said. “I’m sure he knows how he feels.”

Race didn’t like the frown Aldrin shot the man. That was never a good thing.

“We can take a few minutes out of our date and take my friend to the airport.”

“The airport is at least an hour away at this time of night,” the man griped. “Our reservations at
La Cerveceria
are in thirty minutes.”

The Rivals of Versailles: A Novel (The Mistresses of Versailles Trilogy) by Sally Christie
The Yggyssey by Daniel Pinkwater
Pierced by a Sword by Bud Macfarlane
La tormenta de nieve by Johan Theorin
Off Season by Eric Walters
Crystal by Walter Dean Myers
The Haunting of Hill House by Shirley Jackson
Ingenieros del alma by Frank Westerman
Woods and Chalices by Tomaz Salamun
The Devotion Of Suspect X by Higashino, Keigo
Our partner