Cade Creek 12 - Heart of a Mountain 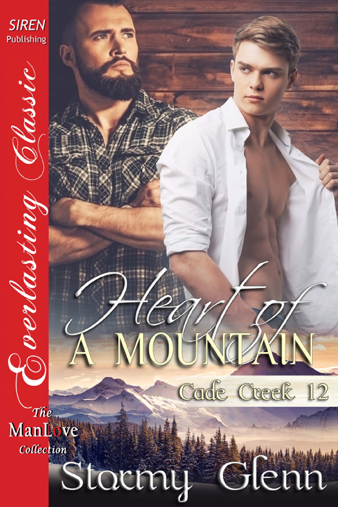 Heart of a Mountain

John Aldrin Flores came to Cade Creek hoping to build a new life outside of the city. After landing a job at the Cade Creek Diner, Aldrin has a chance to meet many of the townspeople, but the one that interests him the most is the one that doesn't say anything. Determined to bring the gorgeous man out of his shell, Aldrin sets about showing Jonah Cade that there is life off his mountain top.

Jonah Cade's family founded Cade Creek. There is a legacy there he's not sure he can fulfill. After losing every member of his family in a horrific accident the same week he suffers the horrors of war at its worst, Jonah cracks. Moving to the top of his mountain and becoming a recluse is an act of pure self-preservation.

At the behest of his therapist, he goes into town once a week for church, supplies, and to have the Sunday special at the Cade Creek Diner. When his dinner comes with a kind word and a smile, Jonah starts to look outside his self-imposed exile, but will the danger stalking them tear them apart before Aldrin's smile wins Jonah over? And can Jonah learn to trust in people again before he loses Aldrin forever?

All art and logo copyright © 2016 by Siren Publishing, Inc.

If you have purchased this copy of
Heart of a Mountain
by Stormy Glenn from BookStrand.com or its official distributors, thank you. Also, thank you for not sharing your copy of this book.

Dedicated to the real John Aldrin Flores…thanks for the name

“Oh, who’s that?” John Aldrin Flores whispered as he watched a mountain of a man amble into the Cade Creek Diner. The man was rough looking, his chestnut hair shaggy and unkempt, as if it hadn’t been cut in ages. The bushy beard on his face hid most of his features…except the eyes.

Aldrin saw the way those smoky gray eyes scanned the diner when the tall man walked into the place. Aldrin’s skin prickled when they passed over him, then came back just as fast, pinning him where he stood.

Those intense smoky gray eyes widened slightly when Aldrin smiled, and then darted away again as the man made his way to a booth in the back of the diner. Beneath the scraggly beard, Aldrin thought he detected a little flushed skin, but it was gone before he could be sure.

“Honey, you don’t want none of that.”

Aldrin couldn’t tear his gaze away from the massive man even to give his new boss, Trudy, a heavy eye roll. “Why not?”

This time, Trudy got his attention. “Jonah Cade?” he asked. “As in Cade Creek? That Cade?”

Trudy nodded. “His great-granddaddy founded Cade Creek back in the early 1800s. The Cade family has been here ever since.”

“Okay, and?” The man being the descendant of the guy that had founded the town didn’t mean Aldrin wasn’t interested, because he was. Jonah was a whole lot yummier than anything he had seen since he arrived in Cade Creek a few weeks before, and the town was full of gorgeous men…maybe too gorgeous.

Aldrin liked a little character to his guys, and Jonah Cade had more character than anyone he had ever seen before. Between the glorious chestnut-colored hair, and the beard that hid what Aldrin was almost certain was a set of plush lips that begged to be kissed, the man had all of Aldrin’s interest.

That didn’t even begin to take into account how tall the man was. The guy had to duck his head just to get inside the building, and there was no way anyone could have sat beside him in the booth, not unless they wanted to get squished. He took a large portion of the entire thing. He wasn’t overweight exactly, just thick. He was what Aldrin’s mama would have called solid.

He was what Aldrin called yummy.

Aldrin frowned as he glanced back at the man sitting in the back booth. “Homophobic?”

He had never hidden his sexual orientation from his new boss, and had in fact moved to Cade Creek after being kidnapped. Once he was here, his friend Race suggested he stick around. Aldrin found it to be a place that was open to the life he wanted to live, one that was open and honest with who he was. It had taken him less than a week to decide that Cade Creek was a dream come true for an openly gay man.

“People phobic,” Trudy replied. “That man don’t like anybody.”

Aldrin snorted. He had never met anyone he couldn’t make smile. It was an integral part of his bubbly personality. Aldrin loved life. He loved to smile and laugh and sing and dance. And he loved to share that joy of life with everyone he met.

“I’ll be fine,” Aldrin said as he grabbed a menu and started for the booth in the back of the diner. He put on his biggest, most welcoming smile as he reached the booth and set the menu down. “Welcome to Cade Creek Diner, sir. My name is Aldrin. I’ll be your waiter today.”

“Coffee, black,” the man said without even looking at the menu, or Aldrin. “The Sunday Special, green beans, no carrots, milk with my meal.”

Aldrin blinked at the crispness of the man’s words. There was an unfriendly vibe to them that Aldrin was sure to put most people off. The guy might as well have worn a sign that said “back off” or “keep fifty feet away” or even “leave me the hell alone.”

Aldrin sent the man a thousand watt smile before grabbing the menu and walking back behind the counter. He clipped the order slip into place and spun the round metal holder around so the cook could see it and then placed the menu back where it went.

“Told you,” Trudy said without looking away from the coffee machine she was refilling. “Jonah Cade doesn’t like anyone.”

“Maybe he’s just lonely,” Aldrin mused as he leaned back against the counter and looked toward the back of the diner. As soon as he did, Jonah turned his head away as if he had been watching Aldrin, but didn’t want Aldrin to know he had been watching, and went back to reading the book in front of him.

Aldrin turned to wipe the counter down to hide his grin. Five minutes and he was already getting to the man. His plan for world domination was coming along just fine.

“Better get him his coffee, Aldrin.” Trudy nodded to the fresh pot of coffee. “Jonah can get mighty grouchy if he doesn’t get his meal on time.”

The man looked like a big, gruff bear and no doubt growled at everyone. Aldrin wondered if he could get Jonah to growl for him or, at the very least, rouse a smile out of the man.

“On it.” Aldrin grabbed the fresh pot of coffee Trudy had just prepared and carried it over to the last table. He turned the cup over and carefully poured the black stuff almost to the brim. “Can I get you anything else while you wait for your meal, Mr. Cade?”

Gray eyes flickered up to Aldrin before lowering back to his book. “Solitude.”

As much as it galled him to do so, Aldrin plastered a beaming smile on his face. He would see a smile on this guy’s face if it was the last thing he did. “Of course, Mr. Cade. I’ll have your meal to you as soon as it’s done cooking.”

Aldrin’s smile stayed on his face even when he wanted to growl. He hated rude people. Of course, Jonah Cade didn’t realize he had just sealed his fate. Aldrin was going to make it his mission to see Jonah smile, even if he had to stretch the man’s lips himself.

Shopping for a CEO's Fiancee by Julia Kent
Bear-ever Yours by Terry Bolryder
Sanctuary by T.W. Piperbrook
Empire: The Rise and Demise of the British World Order and the Lessons for Global Power by Niall Ferguson
BUY ME by Riley, Alexa
Mask on the Cruise Ship by Melanie Jackson
The Forsaken - The Apocalypse Trilogy: Book Two by G. Wells Taylor
A Mother for His Twins by Lucy Clark
Chase Baker and the Golden Condor: (A Chase Baker Thriller Series No. 2) by Vincent Zandri
The Devil Is a Part-Timer!, Vol. 2 by Satoshi Wagahara
Our partner