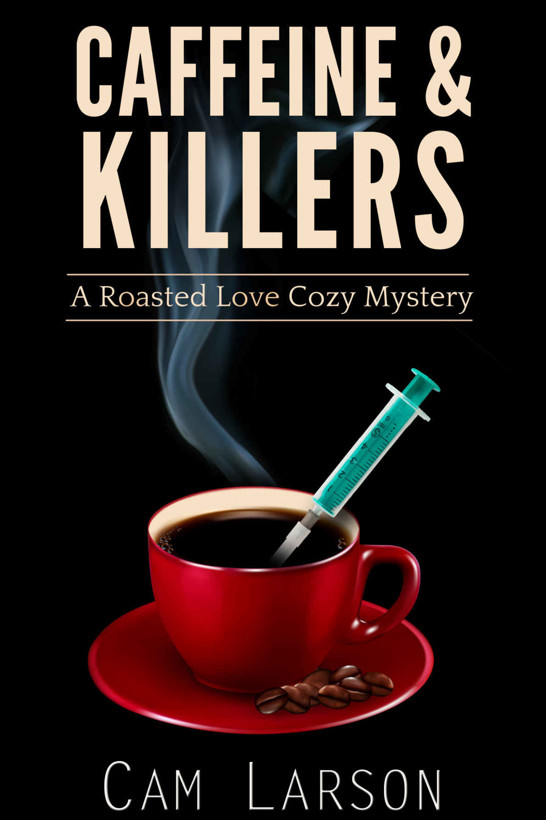 This
book is a work of fiction. Names, characters, places and incidents
are either the product of the author's imagination or are used
fictionally. Any resemblance to actual persons, living or dead, or to
actual events or locales is entirely coincidental.

This
ebook is licensed for your personal enjoyment only. This ebook may
not be re-sold or given away to other people. If you like to share
this book with another person, please purchase an additional copy for
each person you share it with.

All rights reserved. Including the right to reproduce this book or
portions thereof, in any form. No part of this text may be reproduced
in any form without the express written permission of the author.

Thank
you for choosing to read
A
Cup of Murder!

Wanna
be in my private mystery readers group?

I've got a secret group of
readers that I share with. Sometimes, it's a pre-release book or an
upcoming cover. Or, they help me choose the next cover or adventure.

And
I ALWAYS let you know when I've put a book on special discount in
case you missed it earlier. So if you want to be a part of the group
–

Join
the team
by
click
ing
the
link
above.

There weren't too many homeless folks living
around our little arts community of West River, New York, but we
tried our best to take care of those we did have. The one that
gradually fell under my care was a young-old man named John.

But he knew me as Laila Rook, barista at Roasted
Love Coffeehouse – a popular spot that was part of the pretty
Italian architecture of the Piazza strip, right in the heart of town.
As I arrived at 7:50 a.m. for my shift, I saw John waiting for me in
his usual spot.

I was a little early today, and he was sitting on
the sidewalk and leaning against the building near our front door. It
was a little cool on this April morning and he had his knees drawn up
with his thin arms wrapped around them. He looked like someone
encased in a cocoon.

He'd once told me he was thirty-six years old. To
me, he looked more like someone in his upper forties or early fifties
at least. More than once he had been shooed from that same spot that
he'd chosen as his own in front of Roasted Love, but he always
returned.

"Hello, John," I said, pushing open the
door. "Come on in. Jacob's got the coffee ready. You can try the
first cup of the day."

John slowly sat up, and grinned at me. "Laila!
How are you today?" He got to his feet, moving rather stiffly,
and pushed back his long tawny hair from his face. Part of his hair
fell down again over one eye, and the rest nearly touched his slim
shoulders.

The one visible eye was deep brown and had a look
of kindness and warmth, even though he himself was obviously cold and
hungry. I was certain that he still had a good heart, even with his
very humble station in life.

"Aw, I'm fine, John. Just glad to see you."
And I meant it. There was always the reality among the homeless that
they might simply disappear one day and you'd never know what
happened to them, one way or the other.

He wiped his worn shoes on the mat and followed me
through the door while I held it open for him. In a few moments I'd
put away my purse, greeted my boss, Jacob Weaver, and poured out some
coffee for John.

He sat down in the corner across from the counter,
his usual spot. The regulars left it open for him and most of them
spoke to him as if he was an old friend. They would nearly always
stop to ask him how he was doing, or slip him a few bills.

I brought him his coffee, served up in a heavy
ceramic mug as was our custom here at Roasted Love. "You’re
too good to me," he said, taking the steaming cup in both hands
to warm his fingers.

"You do know I only give you coffee in
exchange for your stories, don’t you?" I said. It was true. I
loved to hear him talk. His deep voice captivated me. I wasn’t sure
how many of his stories were true and how many were not, but that
didn’t matter. John gave our little coffeehouse some real spirit
when he talked.

He pushed a dollar bill toward me. I slid it back
and handed him a Danish on a small ceramic plate that matched the cup
he held in his hands.

For the next hour or so I took care of the morning
rush, making sure everyone who stopped had enough caffeine to get
them through their morning work hours. After that, when the customers
had gone on to work – or wherever they went when they left Roasted
Love – I had the rather boring job of refilling all the sugar
containers and salt shakers on all the tables and counters in the
place.

I was ready to be entertained. And John was more
than happy to oblige.

"Did I ever tell you about my college days,
Laila?" he asked.

"Yes, you have," I said, "but I’m
sure I haven't heard everything. Tell me: did you go there to study,
or to pull pranks?"

"Well, I'm afraid I didn’t stay long enough
to study very much. But there was this one time – "

"Yes? I'm listening," I said wiping down
a table and unscrewing the top of a tall sugar container.

John cleared his throat. "I streaked through
the gymnasium just as the fans came in for a game of basketball."

I busted out laughing. I couldn't help it.

"Oh, it was a big deal. The game, I mean. And
I wasn't the only one streaking. I had several buddies who joined me
on that one."

"I’m not sure I want the full details on
that one," I said, still laughing. For a moment, I forgot that
he slept on the streets. "How long did you stay in college?"

"I lasted two years before I decided it
wasn’t for me." He paused for a moment. "You’re
wondering why I didn’t stay. I don't exactly know. But I guess I'd
probably be in a better place today if I had."

I shrugged. "I’m not blaming you for
anything. College isn’t for everyone. I spent a couple of years
there, thinking I’d like to be a doctor. But that was as far as I
got."

I didn’t mention that I'd dropped out for
financial reasons. But like me, John didn’t ask questions. I had
never pried into his personal life and he didn't ask about mine. I
liked our friendship the way it was.

"You would have made a good doctor,"
John said. "You're a good listener."

Then he paused, and turned to a different subject.
"You know that councilman who’s trying to get rid of the
homeless in town?" he asked. "Councilman Calvin Carpenter."

"Well, he thinks we give West River a bad
name. He must not have gone through any bad times himself." John
drained the last of the coffee from his cup. "Or maybe he’s
just forgotten what bad times are like."

I stepped behind the counter and brought out the
pot, and refilled his cup with hot coffee. I remembered seeing that
same councilman on TV campaigning, and how he'd compared the homeless
to rats taking over the town. How could one human being refer to
another as a rat?

"He should get to know you on a personal
level," I said. "He would see that you're a real person,
just like his neighbors or his family. We’re all people."

"Yes, but not everyone is like you, Laila,"
said John. "That red hair of yours must be what sends fire
through you when you think you have a cause." He laughed, and I
joined him. I liked to think my hair was dark auburn but John would
always tease me about being the redhead.

Deeper Into the Void by Mitchell A. Duncan
Shuteye for the Timebroker by Paul Di Filippo
Everyday Play by Christy Isbell
A Deadly Injustice by Ian Morson
The Dream of the Celt: A Novel by Mario Vargas Llosa
Rest in Pieces by Katie Graykowski
Hitler's Daughter by Jackie French
An Unconventional Miss by Dorothy Elbury
Felix and the Red Rats by James Norcliffe
Spells & Sleeping Bags #3 by Sarah Mlynowski
Our partner