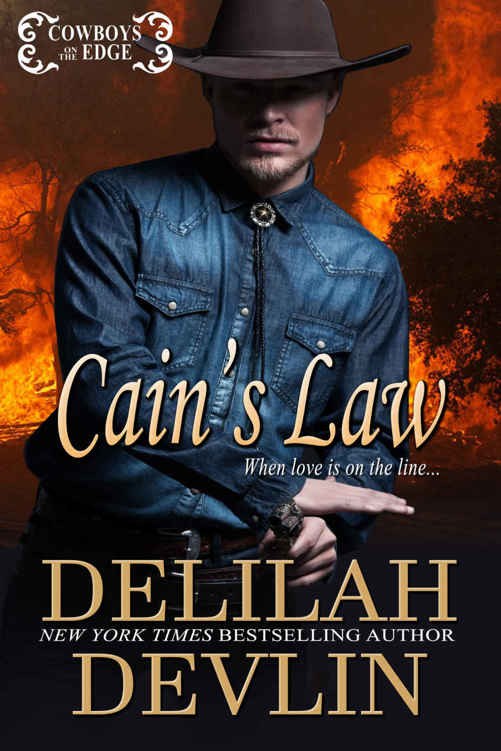 When love is on the line, a cowboy will risk everything…

Texas Lawman, Cain Whitfield, has been burned before by a beautiful brunette with dark doe eyes. He won’t be fooled again. But fate has a rotten sense of humor when he discovers the latest stranger to arrive in his small Texas town is a former mob enforcer’s girlfriend—something he learns when the cabin she rented goes up in flames and her boyfriend tries to run them both off the road. Now, he’s got to keep her alive and under wraps long enough to arrest the bastard. Resisting his attraction to the drop-dead gorgeous brunette proves impossible when they’re forced to share a safe house while the sheriff and the other deputies double patrols to keep her safe.

Even though she knows they’re all wrong for each other, Carina Black can’t help her attraction for the proud lawman. She’s done with the glitz and glamour of her former life, but can she convince Cain to look beyond her past to trust she’s ready for life in a small town? As her former boyfriend closes in, she worries too that her poor judgment could bring harm to a decent man.

The longer they’re together, the hotter their passion burns…

A
Cowboys on the Edge
story

This book is a work of fiction. The names, characters, places, and incidents are products of the author’s imagination or have been used fictitiously and are not to be construed as real. Any resemblance to persons, living or dead, actual events, locales or organizations is entirely coincidental.

ALL RIGHTS RESERVED. No part of this book may be used or reproduced in any manner whatsoever without written permission from the author.

To those of you who’ve read me before—hello, friends! To new readers, welcome to my world!

I love hearing from readers, and have a very active blog and Facebook friend page. I run contests, talk about my favorite TV shows, what I collect and make, what drives me crazy. I tend to ramble a bit. I’m doing it right now. But if you’d like to learn more about me and what I’m doing or writing about, be sure to check out the “About Delilah Devlin” page after the story.

And if you enjoy
this
story, please consider leaving a review on your favorite retail site or simply tell a friend.
Readers do influence other readers. We have to trust someone to tell us whether we’ll have fun when we open a new story!

Sign up for my newsletter to be the first to learn about new releases, free reads, and giveaways:
Newsletter

Other Books by Delilah Devlin

Excerpt from Dream of Me

C
ain Whitfield wasn’t
the sort of man who put much stock in premonitions or sixth sense. But the moment he’d first spotted the shy brunette through the window of the Prickly Pear Motel, he’d known trouble had arrived in Caldera.

His gaze had snagged on her ill-fitting clothing and her wildly curling hair. Not unusual, his noticing a stranger arriving in his little town. But the minute his dick twitched, he should have heeded the warning.

Yeah, he sure could pick ’em. Just like his ex, only Susan hadn’t burned down a cabin. She’d left his place cleaner than she’d managed to keep it the entire six months they’d been together. Hell, the woman hadn’t even left him a can of beans in the pantry when she’d walked out on their marriage. On a Monday. After he’d left for work. Via a note taped to the kitchen counter because she couldn’t put that into a U-Haul trailer.

Staring at the fire that lit the Texas night sky, he shook his head. The strobing lights of police and fire vehicles were no competition for the furious blaze. No simple kitchen fire or leaf pile run amok. It was going to be a long night.

The minute he’d gotten a call to come to a house fire out on Old Amity Road, he’d suspected the owner of the cabin, Mutt Owens, the father of his fellow deputy, Tank Owens, had finally committed arson, because the old ramshackle cabin hadn’t had a tenant in a couple of years.

That suspicion had been quickly squashed when he’d spied that same pretty brunette who had
pricked
his attention two nights earlier standing apart from the men surrounding the fire truck.

He spotted the sheriff, Josh Penske, also standing beside the fire crew, not that the firefighters could do much more than wet the grass surrounding the building. This far out of town they didn’t have a hydrant to hook up to. The water they carried on the pumper truck ensured the blaze didn’t set fire to the tall buffalo grass surrounding the clearing, and they were busy unrolling more hoses.

As he stood, more vehicles arrived—volunteer firefighters, among them Jeremiah McCord whose ranch butted up against this property. Jeremiah would be the first to arrive—he’d nearly lost his shirt the last time a fire swept across his ranch. The rancher gave Cain a nod then hurried to join the mostly volunteer crew beside the truck.

Chief Blake Thacker roamed around the cabin, carrying a portable water bladder used for prescribed burns and pointing his hose toward the ground to extinguish embers wherever they flew. His expression was drawn and harsh.

No one was paying much attention to the slender figure leaning against an older model Ford Taurus with Illinois plates, her shoulders hunched and her face mostly obscured by the fall of thick dark hair.

The first time he’d seen her, he’d known something was off. She’d been standing in front of the counter, filling out forms at the motel’s registration desk in clothes that didn’t fit well—too slouchy and mud-colored, when her pale skin and dark hair cried out for vibrant colors. That the clothing wasn’t hers was apparent. Her furtive glance out the window at his squad car had further piqued his interest. This time, not due to any attraction he’d initially felt, but because she’d looked scared.

But just as he’d decided to park next to the office and introduce himself to the newcomer in town, he’d gotten a call about a domestic disturbance, and after circling the parking lot, he’d left.

Until tonight, he hadn’t thought about her again.

What she was doing here was a mystery. But he knew she was somehow involved in this fire. And as he raised his nose to the air, he began adding up the charges—too pretty, too quiet, and by the way her gaze kept sweeping the clearing, still scared. And was that gas he smelled? Did they have another firebug in their midst?

Jeremiah McCord had gone and married their last arsonist. Something that still had most of the townsfolk shaking their heads. But maybe Jeremiah figured it was safer having Carly close to keep her out of trouble.

Cain blew out a breath and moved toward the group. The brunette was the sheriff’s problem now. He headed toward him.

As he approached, Josh tilted his head toward the cabin. “Went up too quick to be any accident. And the chief’s already confirmed use of an accelerant.” He pointed toward the porch, which was fully engulfed in flames. “Started there. Don’t think the woman set it. I found her crawling out of a window in the back. Nearly came out of her skin when I shouted.”

They both turned their gazes to the brunette who quickly averted hers.

“Something’s off about her,” Cain said, wondering if the sheriff had learned something. Not that anything but his professional curiosity was aroused. He cleared his throat.

Josh’s gaze didn’t stray from the woman who stood with her shoulders hunched and her arms wrapped over her chest. “I’m gonna stay here. The chief wants volunteers to spread out and walk the area into the woods with rakes and water pumps to make sure this thing doesn’t get any bigger than it is.”

He stiffened. Cain didn’t like where this discussion was leading.

“I’ll need you to take her back to the station to get her statement and see what she knows. Be sure to run the plates on that car—”

Cain cussed silently but didn’t bother arguing. “And I’ll see if she has any outstanding warrants…”

Josh gave him a quick grin and clapped his shoulder. “Figured you’d be the last man to be tempted by a pretty face.”

Cain narrowed his gaze, but otherwise didn’t rise to the jibe. A town like Caldera had no secrets, at least none that stayed buried long. His next door neighbor had made sure all his buddies at the diner knew exactly what had transpired when Susan left, down to the make and model of the pickup truck that pulled away with all his furniture and appliances, even his own clothing. Cain guessed it had made for a rip-roaring story since the smiles and pats of commiseration hadn’t stopped.

Yeah, he’d be the last man to let down his guard with a pretty brunette. But man, he did have a type. The woman who refused to meet his stare was everything he liked in one curvy little package—including that lost, lonely look.
Shit.

He hitched up his belt, drew a deep breath, and headed toward her, noting the frantic way her gaze hit everything around him before, at last, widening and rising to meet his. She wore the same baggy, oversized blouse and slacks she had when she’d stood inside the motel office—an outfit his grandma might have worn. And she was barefoot. For some reason, that last fact made his stomach ache.

Damn, this close she had the face of an angel—if angels had dark, doe-like eyes, skin the color of fresh cream, and lips as plump and dark as ripe cherries. Firelight lent an illusion of intimacy…

He reached for the brim of his hat and tipped it. “Ma’am.”

Her gaze went to the badge pinned to the pocket of his denim shirt. “Deputy.”

“I need you to accompany me to the station so I can take your statement.”

Her eyebrows drew closer. “We can’t do it here?”

Her question came quick and with a touch of vinegar, which still didn’t lesson the sweetness of her honeyed voice. He liked a bit of tart with his sweet.
Dammit.
“Rules keep us all safe, ma’am.” He tilted his chin toward his squad car. “You can ride with me.”

She straightened. “I can drive myself.”

“Someone will bring your car along later,” he said, crossing his arms.

Her gaze whipped between the house and the car. “My things.”

What things?
He glanced into the back, but it was empty. He raised an eyebrow.

The breath she blew out billowed her cheeks. “My purse is in the cabin.”

“They didn’t even try to put out the fire.”

He glanced around the clearing. “You see a hydrant? A pond? They only carry about two thousand gallons of water. Not enough to put out that blaze. All they can do is let it burn and use their water to make sure they keep the grass around it from going up. Sorry about your things.”

Tears began to fill her eyes.

He mentally cussed himself for upsetting her, but there wasn’t a thing he could do. He waved a hand toward his car.

She stiffened her back, shoved her hands deep into her pants pockets and swept past him, walking swiftly toward his vehicle despite the fact she was walking over small stones.

Another twinge tightened his chest this time. Maybe his guard was up for all the wrong reasons. She might just be down on her luck. And now, she didn’t even have a pair of shoes.

She walked to the back passenger door of his car.

“You can ride up front,” he said, before he could stop himself.