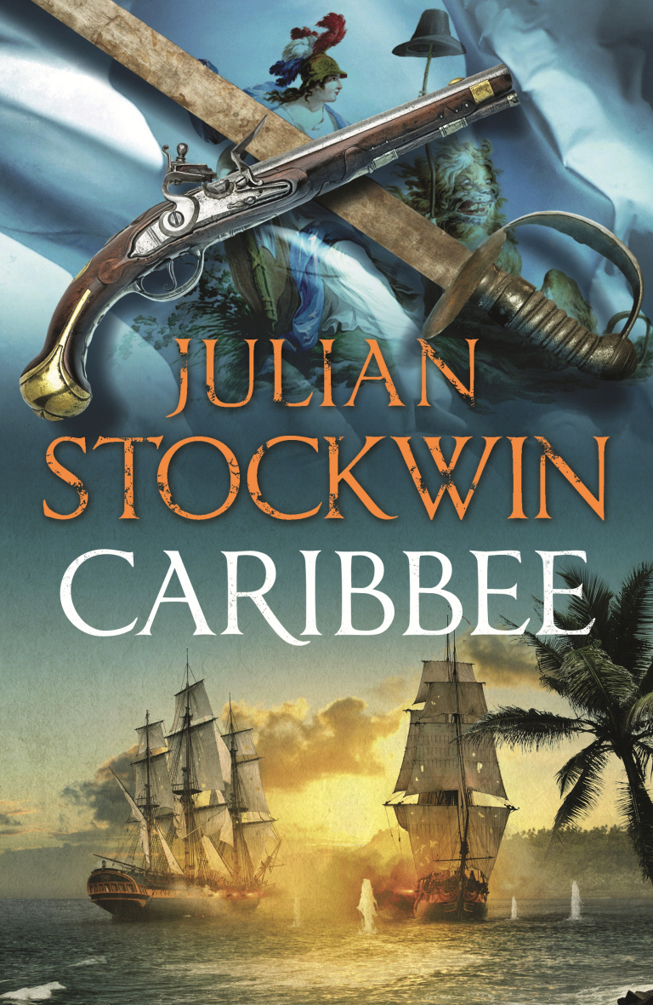 Treachery (
US Title
: The Privateer’s Revenge)

First published in Great Britain in 2013 by

The right of Julian Stockwin to be identified as the Author of the Work has been asserted by him in accordance with the Copyright, Designs and Patents Act 1988.

To all my shipmates, old and new

The frigate
L’Aurore
had been at sea for long weeks, beating up the coast of South America in frantic haste on a mission that might well see the catastrophic situation of the British in Buenos Aires reversed. It had been a voyage of daring speed and increasing privation as provisions and water ran low under the pressing need for hurry. Reduced to short allowance, the griping of hunger was constantly with them.

Captain Thomas Kydd looked up from his desk. ‘Thank you, Mr Searle.’

The ship’s youngest midshipman hesitated, unsure whether to wait for a response for the second lieutenant.

Kydd laid down his pen. ‘Tell Mr Curzon I’ll be on deck presently.’

Apprehension stole over Kydd as he contemplated his task: to persuade a senior commander-in-chief to detach part of his fleet to go south in rescue of an unauthorised expedition that had sought to liberate South America from the Spanish.

It had all started brilliantly. Their tiny force had quickly captured the seat of the viceroyalty of the River Plate, Buenos Aires, but then the population had turned on their liberators and forced the surrender of their land forces. Commodore Popham, still at anchor off the port there, was desperately seeking support to retake the city.

From the quarterdeck Kydd gazed across an exuberant expanse of white-flecked blue sea to a distant light grey smudge, Barbados – where was to be found the Leeward Islands Squadron. There were just hours left to ensure that his arguments to its admiral for weakening the defences of the vital sugar islands by parting with his valuable assets were sound and convincing.

‘A noble achievement, our voyage, sir, I’m persuaded,’ Curzon offered, as they neared.

‘A damned challenging one,’ agreed Kydd, absently. There was murmuring that he didn’t catch from the group around the wheel behind him but it wasn’t hard to guess its drift. These were men who had left shipmates as prisoners to the Spaniards and they were expecting to see them freed soon by bold naval action.

Barbados was at its shimmering tropical best. After the intense blue of the deep sea, with its gaily tumbling white combers, and shoals of bonito and flying fish pursued by dolphins, there was now calm and beguiling transparent jade water above the corals. Along the shore coconut palms fringed dazzling white beaches. Neat houses on stilts with distinctive green jalousies perched above the tideline.

It was an impossibly lovely prospect for those who had voyaged so long and endured so much but, mission accomplished, they must leave and return to that grey southern madness.

By the time they had made the bluffs of South Point and left the brown and regular green of sugar fields safely to starboard, anxiety returned to steal in on Kydd. There was the possibility that the Leeward Islands Squadron was at sea, in which case it could be anywhere and would have to be found. However, his real concern was that, as a junior frigate captain, he was going to debate high strategy with a senior admiral. But there was no alternative: too many brave men depended on what he was about to say.

Retribution by Elizabeth Forrest
Señor Saint by Leslie Charteris
1 Dicey Grenor by Grenor, Dicey
Delicious One-Pot Dishes by Linda Gassenheimer
The Suburb Beyond the Stars by M. T. Anderson
Assignment - Manchurian Doll by Edward S. Aarons
House of a Thousand Screams by R.L. Stine
A Trick of the Mind by Penny Hancock
How to be Anonymous Online by Eydie, A. M.
Mating Rituals of the North American WASP by Lauren Lipton
Our partner