Read Caution to the Wind Online

Caution to the Wind 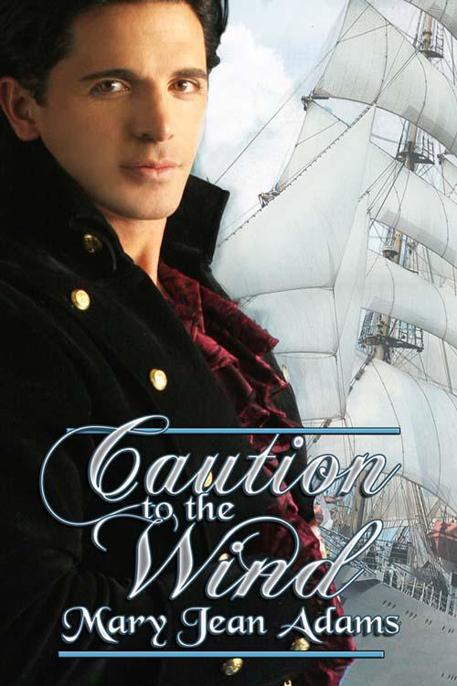 Other Titles by Mary Jean Adams

Caution to the Wind

Other Titles by Mary Jean Adams

To Marjorie, my second biggest fan

and the best mother-in-law a girl could wish for.

And to my own parents, Darlene and Gerald,

for their years of love and support.

The American Revolution had become a drawn out battle between the ragtag American Army and British forces. General Washington’s troops, decimated by the previous winter at Valley Forge, were a sickly group of soldiers ill-equipped for battle. On land, it was a war of attrition.

At sea, a different scene prevailed where privateers, ships given the legal right to pursue and capture English vessels supplying the British forces, combined American capitalism with patriotic fervor. A combination of bravery and enlightened self-interest provided General Washington a powerful ally in the War for Independence.

Amanda Blakely twisted around to take a critical survey of her appearance in her floor length bedroom mirror. Her father’s work clothes were large, but not so large that a few tucks here and there, and a wide leather belt couldn’t make them fit her tall frame. She grabbed the aged leather strap from the dresser and fastened it about her slender waist using one of the notches she had added with nail and hammer.

She had bound her chest, an almost unnecessary effort since her curves weren’t exactly the kind that drew attention. Still, without her shift, the soft woolen bindings were all that protected her delicate skin from the coarse cotton weave of her tunic.

She scrunched her nose at her reflection. Turning from a grown woman into an adolescent boy had taken less of an effort than she expected—certainly less than she would have hoped. If nature had been kinder to her, it wouldn’t have been this easy. She leaned closer to assess her youthful face in the mirror. Sixteen? No, no stubble to make anyone believe she was quite that old. Even fifteen would be a stretch. Fourteen, a year older than Neil, would be much more believable. In her father’s clothes, she looked far more a fourteen-year-old boy than a twenty-one-year-old woman.

Amanda stared at the visage of the young boy reflected in the wavy surface of the old mirror. What would she do if Neil refused to come back with her? Would she follow him onto a ship? Could she? She had always considered herself a sensible young woman, but with her little brother’s life at stake, she would do whatever it took to protect him.

However, she must consider the possibility that she would not make it in time. Neil had left sometime during the night and, even if she left soon, it would be well on noon when she reached the harbor. What would she do if he had already signed on to a ship? Or that ship had already sailed?

She took a deep breath and crossed her hands over her racing heart. Better to focus on getting ready so she could find Neil before he had a chance to do anything foolish.

Amanda picked up the scissors from the nightstand next to the bed. Sighing, she took a last look at her long, honey-blonde curls. “For my brother,” she said, her voice echoing in the empty bedroom.

An unexpected shudder shook her.
Excitement or fear?
She forced the question from her mind and resumed cutting, the cold metal heavy in her trembling hand.

Once finished, she leaned in and tugged at a lock beside her temple. When released, it sprang back, a cherubic curl against her cheek.

“Humph, it will have to do I suppose.” She tied her hair back into a short tail that hung just past her shoulders with a scrap of old leather.

Satisfied, she picked up her father’s aged felt hat and flopped it onto her blonde curls. Then she spun on her heal, snatched her canvas sack off the end of her bed, and sped down the back stairs.

Amanda urged Homer, her sturdy plow horse, toward Baltimore. By the time they reached the edge of town, he whistled and wheezed, occasionally releasing a lungful of air in a shuddering sigh that promised to be his last. She sold him to a skeptical farmer, probably for far less than his worth. However, if she hoped to stop her brother before he did anything foolish, she did not have time to waste on negotiations.

Without a mount, Amanda forced her way on foot through the busy portside streets, wondering just how many people inhabited the growing town. Despite the early hour, it seemed most of them had business at the docks and all in the opposite direction.

Bracing herself against the oncoming tide of people, she stood on her toes and craned her neck to peer over the faces in front of her. What Neil lacked in height he made up for in strength, but at this moment, she would have given anything to put a couple inches on him so she could spot his dark brown head above the masses.

Amanda pushed forward again, sidestepping murky puddles and drawing up the lapels of her father’s coat to protect her mouth and nose from the stench. At times, the ground became so muddy she had no choice but to move forward on tiptoe. Water soaked her leather shoes and greenish brown droplets of foul-smelling ooze spotted her cotton stockings.

“I bloody well can do the job, and I challenge any man who tells me I can’t!”

Amanda placed her fists on her hips, raised her chin and turned full circle, trying to pinpoint the owner of the familiar, belligerent tone.

“And, I tells you, you can’t!” came the cantankerous reply.

She buried her chin to her chest the way Homer did when working a new field filled with roots and plowed her way toward the voices through the tangle of idling sailors. She could smell the tang of the ocean, but the sea of elbows, backs and broad shoulders made it difficult to see anything but the bodies in front of her. A burly man in a pair of striped pants and a tattered shirt threatened to cuff her ears for her rudeness. Amanda quickened her pace. She shouldered her way past one stalwart frame after another, holding her nose against the sour onslaught of unwashed bodies.

She dodged the elbow of a sailor lost in a fiery debate with his shipmate, and at last, the sea opened up before her. Amanda gasped, letting the fresh, salty air fill her desperate lungs.

“I can!” the familiar voice roared.

Amanda spun about so fast the disheveled crowd became no more than a blur, like the oily surface of the puddles she had tried so hard to avoid.

At the edge of the wharf, she spotted Neil’s sturdy form.

A stocky, old man with wiry gray curls leaned half way over a rough-hewn table. Her brother matched the old man’s aggressive stance until barely a paper’s breadth could fit between their noses. Two gazes wrestled with each other, each vying to dominate the small space above the table.

Neil jerked his gaze away from his adversary, but his glare remained. “What the hell are you doing here?”

Amanda thought about chastising him for his language but checked herself. A “boy” her age would be unlikely to have a problem with it. In fact, she probably ought to pay more attention to her brother’s colorful word choice from now on. She might do well to try a few of the phrases herself.

“Just who the bloody hell might you be?” The crusty sailor scratched the stubble on his chin and sat down on his stool with a hard thump.

“I’m his brother,” Amanda replied, forcing her voice deeper into her throat.

Heavens!
Surrounded by the low rumble of male voices, hers sounded more feminine than ever.

The old man squinted watery eyes, letting his gaze trail over her. He lingered on her blonde curls, her narrow waist, her long legs. A salty breeze from the ocean cooled the sweat forming on the top of her upper lip, yet Amanda forced herself to stand still. Just when she was sure he would call her bluff, he turned his attention to Neil and gave him the same cynical perusal.

Amanda’s stomach did a flip. Would Neil give her away? She turned to him and tried to think of some way of persuading him to stay quiet without making the old man suspicious. Her mouth opened and closed, like a fish trying to breathe air, not yet willing to surrender to the inevitable.

“At least not real ones anyways,” Neil added. “He’s my adopted brother.”

Amanda relaxed, an audible sigh escaping before she had a chance to stifle it.

Ignoring her, the old man sucked his teeth and let his gaze roam Neil’s short, stocky figure once more. “So did your father give ya permission to join a privateer at—”

“Uh-huh.” The man rubbed the stubble on his chin again.

It was a wonder that the man could manage to grow facial hair at all with the way he kept scraping his gnarled fingers against his whiskers.

“I see. No family then,” the corner of his eye twitched, “except a brother, of course.”

He turned to Amanda next. “And, how ’bout you? You fifteen too?”

The man’s voice was heavy with sarcasm, but Amanda paid scant attention. Her mind raced to form an answer that made sense.

If Neil was fifteen then


No wait, I am taller. I have to be older. That would make me


“Are we about ready to sail, Bull?” a voice boomed from behind them.

Amanda gasped. Neil shot her a warning glance before they both turned to face the owner of the powerful set of lungs.

Standing straight, the top of Amanda’s head barely reached the man’s shoulders, and she stared at a stylized carving of a she-wolf on a bone button midway up the finely woven, blue woolen waistcoat that stretched across the broad expanse of his chest.

Amanda’s gaze crept upward, past the last she-wolf, past the narrow frill that adorned his starched white shirt, past his equally pristine neck stock until it rested on the steady pulse beating under the shadow of an angled jaw. She willed her gaze to continue its upward path, away from the safety of the slow, even beat.

His cheekbones were set high on his deeply tanned face, his nose straight and narrow at the bridge but flared slightly outward toward the tip so that it softened an otherwise harsh and unyielding countenance. From beneath straight black brows, he skewered the old man with golden eyes so wild they appeared almost feral.

To Amanda’s amazement, the old man he had called Bull stood his ground, undaunted by the withering glare.

“No, we ain’t ’bout ready to sail.” He slammed his fist on the table, making the logbook and quill jump. “We won’t be done loadin’ supplies ’til tomorrow, and I got two more spots t’ fill.”