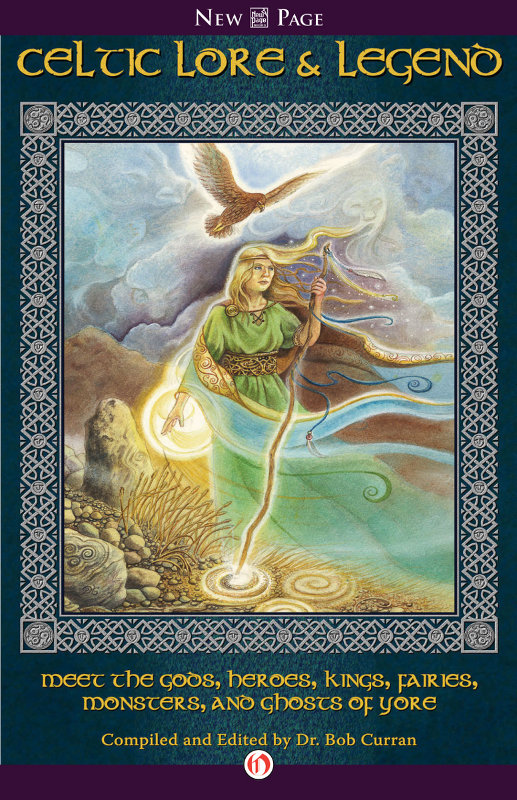 To Mary,
for her long-suffering and
unstinting support in the
writing of this book;
and to Michael and Jennifer,
for their faith
in their father.

I wish to thank Derek Bryce and Llanerch Press for their permission to use their translations of two Breton folktales—“The Ankou” and “The Night Dancers”—and the Stuart Booth Collection for the use of the classic prints in this book. I would also like to thank Michael Pye at New Page Books for his help and encouragement throughout the writing of this book.

Cruachan: The Place of the Sidhe

The Coming of Fionn and the War Against the Norsemen

The Origins of Y Tylwyth Teg

The Tale of Connal

A Selection of Cornish Healing Charms and Spells

A Holy Well in Cornwall

Mrs. Sheridan: Encounters with the Fairies

How Joan Lost the Sight of Her Eye

The Second Sight or the Taish

Not to Be Taken at Bedtime

The Brownie of the Black Haggs

The Celts, claimed Julius Caesar, wrote very little down. There was a very good reason for this: If written material were to fall into the hands of their enemies, it would disclose their strengths and weaknesses, their problems and uncertainties, their way of looking at the world. It could leave them open for conquest. And so, although they did have a written language, the tradition of the Celts was primarily an oral one. Information, history, and cultural perceptions were passed from generation to generation by word of mouth, building into a corpus of lore and legend that persisted even when the Celtic peoples became more settled.

Amongst the Celts, too, were those who were the custodians of such tradition—the storytellers and poets who were known as Bards and fili. These were the men (and women) who remembered the great kings who had ruled, the mysterious and inexplicable events that had befallen their communities, together with the genealogies of the leading families of the region. These were the people who offered history, tradition, and interpretation all rolled into one through the
medium of oral story and tale. They were treated with deference and respect because they were the repositories of the traditions and culture that shaped their societies. In some places where the Celts have settled, this oral tradition continues even today through the medium of the
seanachie
, or local storyteller.

The stories that were passed down from one generation to the next—the
lore
of the community—were those of ancient gods and kings, of great heroes, of awful monsters, of passionate love in the face of adversity. As the centuries passed and one storyteller followed another, details were added or amended to give the tales more imminence, more terror, more splendor, or to fit them into the context in which they were told. Tales, therefore, shifted localities, characters changed, details were added—all crafted and molded by the storyteller’s art. Despite changes and modifications, such tales retained the perceptions, traditions, and hopes of the Celtic race.

From time to time, great communal festivals such as the Irish
Ard Feis
or the Welsh
Eisteddfod
were held not only to celebrate the unity, skill, and strength of the Celtic people, but also their storytelling abilities. Here the Bards performed, displaying their imagination and talents to full effect. Although these events were national gatherings often used for the swearing of allegiance to a national ruler, they were not the sole venue at which Celtic stories were celebrated. In local areas, there were smaller gatherings, many of which persisted almost into modern times in rural Ireland as
ceilidh
-houses, or houses in which people from the local community met in order to sing songs, recite poetry, and tell stories. Sadly, with the advent of television and other forms of media, such places have now more or less died out.

Many of the stories told in these venues had a strongly local flavor and concerned aspects that were familiar to the audiences who heard them. They dealt with everyday life: work, romance, relations with neighbors, and the landscape all around. As with the epic legends before them, these stories were passed
orally from generation to generation. As new cultural trends began to take precedence amongst the Celtic peoples, many of these old stories appeared to lose their immediacy and significance and were gradually lost to memory. Part of the Celtic tradition had vanished. And the oral tradition continues to vanish today as the last of the old generations die off.

Initially, no attempt was made to write any of these tales down. The Celts themselves were a predominantly oral people with little impetus to formally record any of their tradition. (Julius Caesar seems to suggest they were expressly forbidden to write by their
druids
, or holy men, for fear of such texts falling into the hands of others.) Ironically, it was the dying of the pagan way of life that spawned many of the stories and the coming of the new religion—Christianity—that actually preserved the traditions. It was the monks of the new order who first wrote down some of these ancient tales in order to pad out their holy commentaries and lives of saints and to make their teachings more acceptable to their formerly pagan audiences. The stories they recorded were the epic legends of the former tradition: tales of heroes and mighty fighting men, of sorcery and battles, of monsters and warriors. They were the oral traditions the Bards had proclaimed. These legends were gathered together into collections that formed the basis of the Great Myth Cycles, some of which have been passed down to us today. Although there may originally have been many more, only two of these Cycles survive today: the Irish and the Welsh. Other epics may have devolved into lesser collections, which were remembered by the seanachies—the direct successors of the Bards.

The name
seanachie
is an Irish word that traditionally means “man of lore” (although there were women amongst them, too). This is an excellent name, as it encapsulates what the traditional storyteller was all about. He (or she) was the repository of all the communal wisdom and experience that had percolated down across the years and the one who
revealed such wisdom and interpretation through the entertaining medium of stories and remembrances. The “man of lore” offered up interpretations of the landscape round about—sometimes tinged with local history, sometimes with local imagination.

At one time in rural Ireland, nearly every district had its particular seanachie. And areas in other parts of the Celtic world had the same. As mentioned earlier, these storytellers were an integral part of the communities in which they lived. Because of them, the tales had taken on a more homely, localized quality. These were not primarily stories of great gods, kings, and heroes, but rather they were tales of locally known characters, of fairies, of ghosts, and of the supernatural. They were the tales told by the fireside on a dark evening to friends and neighbors who had gathered round. They were stories that bound a community together and also gave it its identity. In effect, they were the means that shaped the society all around, as well as explained and interpreted it to itself.

Despite all of this traditional cohesion, societies began to fragment and split as the years went by and other forms of social interaction took over. Local traditions and tales began to be viewed as being too parochial and as having no relevance to the developing modern world. Television, with its imported culture, began to invade the kitchens where once the local storyteller had reigned supreme. Cinema offered wonders that were said to rival the greatest efforts of the tale-spinners. Gradually, the seanachies and people of lore began to slip away into the shadows as other forms of entertainment came to the forefront. Though there were still some gatherings in the ceilidh-houses of Ireland and other parts of the Celtic world during the 1950s and early 1960s, they had all but died out completely by the 1980s. And with them went the stories and legends.

The tales themselves, however, did not completely die out. Realizing what was happening, some folklorists
did
make an attempt to record for posterity at least some of the old tales and perceptions. Stories were transcribed into both written text and
audio format, and so some archives were built up. And, of course, there are written accounts of the great Myth Cycles that were preserved across the ages. But it has to be said that the majority of the old tales were lost as the human repositories of this lore died off.

And yet, the stories themselves did not
quite
die. Because they were so intricately interwoven with the perceptions and experiences of the Celtic peoples, their influence continued to bubble under the surface of Celtic society. They began to drift into the more mainstream art forms. Writers, artists, playwrights, musicians, and poets who had personal roots in the Celtic world were aware of these legends and used them and the themes they suggested in their work. Although these may not have been the tales of great gods and heroes or stories told by the fireside, the modern works owe much to the lore and language of such tales—tales that the Celts had crafted over the centuries and have now found their way into a more modern idiom. The influence, the perception, and the vision were still there. The lore and legend that had underpinned the earlier tales are present in the more modern works and continue to be so to this day.

This book is a celebration of that lore and legend. Its main purposes are to explore the old tales that have come down to us across the years and to see how they have shaped and honed our perceptions about Celtic life. In order to do this, I have followed a chronological structure that has already been laid out. The Mythological Tales section looks at some of the tales that have appeared in the Great Myth Cycles—those tales of heroes and gods. Because, as has already been noted, the Irish and Welsh Cycles are really the only ones that are in existence, many of the stories from them have been overly published in other volumes. This collection seeks out some of the lesser-known tales and presents them for the reader’s interest and delight.

The second section, Fireside Tales, contains stories from a later chronological period, although the two sections are not necessarily mutually exclusive. These are the stories that reflect the hopes, ideals, fears, and opinions of the later Celtic people,
which were passed on by the seanachies who gathered around the fires in communal kitchens throughout the Celtic world. They are tales of witches, ghosts, fairies, and the like—things that had a distinct imminence to our Celtic forebears.

The final section of the book, Fictional Tales, serves to demonstrate how the ancient stories have influenced more modern writers. Themes that are common in many of these old tales, together with some of their more supernatural aspects, have influenced authors—especially ghost and horror authors—who have in turn placed some of them at the center of their works. Even in some of today’s more visual works (graphic novels and films) such as
Slaine
and
Hellboy
, the influence of some of the old Celtic tales is evident. Indeed,
Hellboy
’s creator, Mike Mignola, often seems to borrow directly from Celtic folktale and myth for some of his work. It would therefore be an omission
not
to include such material in this volume.