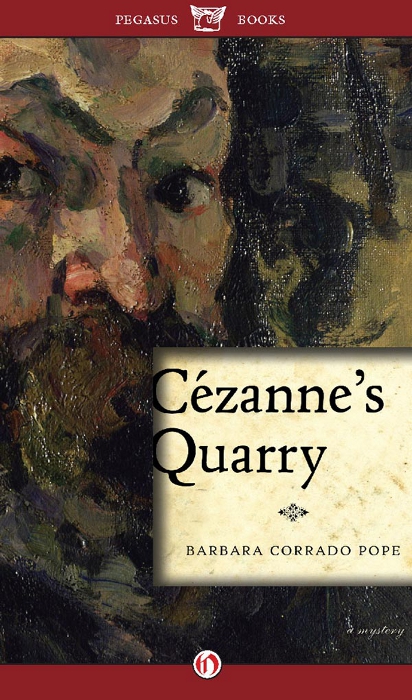 To Daniel, Roberta and Jae, in love and friendship

This first-time novelist owes many debts of gratitude. First thanks to Roberta Till-Retz who proposed writing a novel on Cézanne, Provence and geology. Elizabeth Lyon generously mentored me in matters of writing and publication. My agent, Mollie Glick, was exemplary for her editorial advice and her dedication to getting
Cézanne’s Quarry
into print. Jessica Case was an encouraging and excellent editor. I also thank the many friends who were willing to read and talk about the manuscript in its early phases: Paula Rothenberg, Jeffry and Ulla Kaplow, Barbara and Tom Dolezal, Geraldine Moreno, Joan Pierson, Sue Choppy, Freddie Tryk, Pam Whyte, Patricia Phillips, Barbara Zaczek, Lisa Wolverton, Barbara Altmann, and especially the bi-cultural, bi-lingual critic extraordinaire, George Wickes. Keith Crudgington and Nora McCole stepped in with crucial technical assistance. And Daniel and Stephanie Corrado Pope gave consistent love, criticism and encouragement.

At the beginning of 1885 Cézanne’s lonely contemplation of nature was interrupted by a violent love affair with a woman about whom little is known except that he met her in Aix.

Aix-en-Provence, 1885. A provincial town of 20,000 souls. Its glory days, when good King René reigned over a brilliant, chivalric court, were long since past. After Aix gave the great Mirabeau to the Revolution of 1789, it fell into a deep conservative sleep. As the nineteenth century wore on, Marseilles, only 30 kilometers to the south, more and more surpassed it in people, in industry and in learning. All that remained to Aix in 1885 were a few branches of the university, the law courts (bearing the high-sounding name the Palais de Justice) and, of course, its pretensions.

I
NSPECTOR
A
LBERT
F
RANC APPROACHED HIM
about the dead woman in the quarry because there was no one else around. The Palais de Justice was closed for the summer holidays. Certain that nothing of import could possibly happen during the last two weeks of August, the officers of the court took off to the countryside, leaving the administration of law and order in the hands of Bernard Martin, a judge with little experience and no family or connections in the South of France.

Martin was alone in his attic room when the pounding began. Startled, he marked the page he had been reading in Zola’s new novel and put it on the shelf above his bed. He pushed
Germinal
and Darwin’s
The Origin of Species
hard against the wall, making sure that the black leather-bound Bible his mother had given him would overshadow them. He was not sure who was at the door. He did know that at this time, in this town, it was prudent to keep his radical political sympathies secret. Turning to his table, he shoved the letters from home to one side and swept the stale bread and hardened cheese that remained from his lonely meal to the other.

“Monsieur Martin.
Monsieur le juge
!” the voice on the other side of the door called out with mounting impatience.

With three swift steps Martin reached the door and swung it open. “Sorry, I was reading—”

The panting Albert Franc was not a welcome sight. Although not very tall, Aix’s veteran inspector was broad and strong; a man known as much for his toughness as for his disregard of the finer points of criminal procedure. His bulk filled the low arched doorway. Martin stepped aside and gestured toward the wooden chair in front of the table.

“Thank you.” Franc sat down with a sigh and began to fan himself with his cap. “Any water?”

Martin poured a cup from the clay pitcher that stood on the stand beside his armoire and handed it to Franc, who gulped it down and began to fan his face again.

Before Martin could ask, the inspector’s breathless explanation tumbled out. “Sorry to disturb you, sir. But I had to. It’s a dead woman. In the quarry. Murdered, I think. Since the Proc is not here,” Franc said, using the courthouse parlance for the prosecutor, “I need you to go there with me.”

“A boy just came to the jailhouse with his father to report what he had seen. She’s in the old quarry. He thinks she was a gentlewoman.”

Martin did know, only too well. The inspector’s detainees too often arrived in his chambers bruised and terrified. “Softened up,” as Franc liked to say.

“I was with him for about an hour,” Franc continued. “I’m convinced he’s telling the truth. He thinks he saw blood. And he even described the dress the woman had on. White with green stripes. Much better than anything his mother had ever worn.”

A memory flickered across Martin’s mind, but he could not quite catch it.

“No, sir, it’s just off the Bibémus road, less than an hour away. That’s why I’m here. I thought the two of us should go and take a look as soon as possible, especially with the heat and cholera and all—”

Martin’s stomach lurched. Viewing murder victims had been the most gruesome aspect of his legal education. In the Paris morgue, they had lain gray and anonymous on cold slabs of marble. Martin could only imagine what this infernal heat would do to a body.

“There haven’t been any cases of cholera in Aix, have there?”

“Yes, yes.” Martin tried to sound matter-of-fact as he rose and went to his armoire. Whatever was waiting for him in the quarry, he was not about to show any signs of weakness to someone notorious around the Palais for telling tales. “Which of your men did you bring with you?”

“Most of them are still celebrating the Virgin’s feast, sir.”

Martin swung around. “But the Assumption was three days ago.”

Franc shrugged. “They’re good boys, and it is the middle of August.”

Good boys! Franc liked to hang out in the jailhouse with the uniformed men doing God knows what. Probably mocking the priggishness of judges like himself. When Martin pulled out his frock coat and hat, the proper attire for official business, Franc raised his hand to stop him.

Long Slow Burn by Isabel Sharpe
A Mother for Matilda by Amy Andrews
A Gentleman By Any Other Name by Kasey Michaels
Doctors of Philosophy by Muriel Spark
The Face of Heaven by Murray Pura
Dust to Dust: A Broken Fairy Tale by S. P. Cervantes
Danger on Parade by Carolyn Keene
Call the Rain by Kristi Lea
The Citadel and the Wolves by Peter Goodman
Owning Jacob - SA by Simon Beckett
Our partner