Chase Baker and the God Boy: (A Chase Baker Thriller Series Book No. 3) 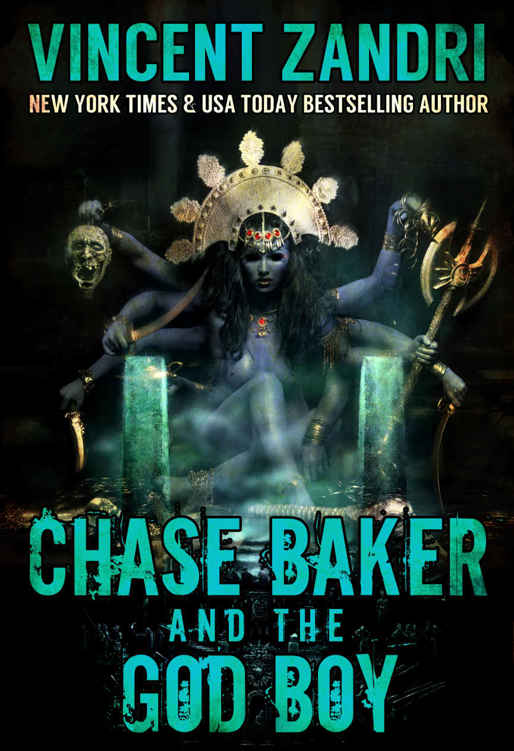 “My fear level rose with this Zandri novel like it hasn’t done
before. Wondering what the killer had in store for Jude and seeing the ending,
well, this is one book that will be with me for a long time to come!”

“I very highly recommend this book … It’s a great crime
drama that is full of action and intense suspense, along with some great twists
… Vincent Zandri has become a huge name and just keeps pouring out one best
seller after another.”

“(The Innocent) is a thriller that has depth and substance,
wickedness and compassion.”

“I also sat on the edge of my seat reading about Jude trying to
stay alive when he was thrown into one of those games … Add to that having
to disarm a bomb for good measure!”

“… a gripping psychological thriller that will keep you riveted
on the edge of your seat as you turn the pages.”

“This book is truly haunting and will stay with you long after
you have closed the covers.”

Chase Baker and the God Boy

“There is no death. How can there be death if
everything is part of the Godhead? The soul never dies and the body is never
really alive.”

“Thuggees were an organized gang of professional assassins –
sometimes described as the world’s first terrorists – who operated from the
13th to the 19th centuries in India. Members of the fanatical religious group were
infamous for their ritualistic assassinations carried out in the name of the
Hindu Goddess Kali. According to the
Guinness Book of Records
, the
Thuggees were responsible for approximately two million deaths.”

“The problem with you Americans, Mate, is you think you’re
entitled to the world.”

The man who presently has his hand
wrapped around my neck is Scottish or, what some people refer to as, a Scott.
He’s also much bigger than me, drunk as a rabid skunk, and really pissed off,
which doesn’t bode well for my immediate future.

“I work for a living,” I say, my
words coming out more like
I-wor-fer-a-livin
’, what with my wind-pipe
about to be crushed. “Nobody’s givin’ me a thing.” Or,
Nobies-giv-a-thin
…

The issue here is not one of
governmental policy-making, nor are we engaged in a geopolitical, socio-economical
debate regarding the United States of America and its lone world power status. Instead,
we’re playing an innocent game of Blackjack, which up until now we’ve been engaging
in rather pleasantly at the old wood bar. That is, before I made the mistake of
spotting Calum slip an extra Ace under his dealt cards when he assumed I wasn’t
looking.

Problem one is that Calum is drunk—really
soused and not exactly adept at sleight of hand. Problem two is that the normally
mild-mannered freelance English/Italian teacher is also a retired mercenary who
once fought for the French Foreign Legion in the Balkan Wars, the Persian Gulf
Wars, and more recently, Iraq and Afghanistan. Oh, and problem three, did I
fail to mention that in retaliation for his cheating I picked Calum’s stash of
cash up off the bar and stuffed it into the pocket of my khaki work shirt?

Six feet tall, round face covered with
a thick red beard, bearing the shoulders of a rugby fullback, Calum (last name unknown),
might never see forty again, but he’s fully capable of tossing me through the
barroom window. Which is precisely what he’s proceeding to do right this very
second.

He releases his hold on my neck, uses
one hand to pick me up by the collar of my leather jacket, and the other to
grab hold of my belt like I’m a bail of Highlands hay he’s about to toss into
the back end of a horse drawn cart.

“Toss him, Cal,” comes a voice from
the crowd inside the bar. “Toss his American ass back to Obama.”

My friends…What senses of humor…

But then I hear, “Calum, put Chase
down this very instant!”

It’s Matt, the Fiddler’s Elbow owner
and proprietor. I catch a quick glance of the tall, wiry, middle-aged man. He’s
wearing a black T-shirt that bears the white letters ABCD in AC/DC-style logo.

“I’m tossing the bastard,” Calum
says in his heavy brogue. “Ayyy, he called me a cheater. He stole me money.”

“A round for Calum
Whatever-your-last-name-is,” I shout as he raises me up so that I’m not only
facing the window, I’m seeing the reflection of my closely cropped hair, stubble-covered
face, and terrified, wide brown eyes.

“Too late, Baker,” he says. “You
insult me, you insult me entire clan.”

He swings me backward to create a
pendulum effect, so that when he finally decides to let me go I will literally
fly through the window.

“One!” the bar crowd shouts.

I’m propelled forward. But the
man-bear isn’t quite ready to release me.

He swings me backward again.

“Two!!!” they shout, enjoying my
imminent demise far more than they are the soccer match being broadcast on four
separate wall-mounted flat screens…Oh, wait, not soccer. Futball.

I swing forward again so that the
top of my head nearly touches the glass. And back again.

I close my eyes, feel myself
propelled forward like a cannonball shot out of a cannon.

Here’s the surprising thing: Getting
tossed through a window, as dramatic and cinematic as it might appear in the
movies, isn’t all that bad. What
is
bad, is landing on the cobblestone
sidewalk on the other side of it. Luckily, I’m wearing my worn leather jacket
over my work shirt or the skin on my chest, arms, and palms would mimic raw
hamburger for certain. But the impact of human being against cobblestone does
knock the air out of me so that when the still very pissed off, and apparently
never satisfied, Calum, exits the Elbow through its open front door, bulling
his way through the onlookers, I can’t even hope to put up a fight. All I can
possibly manage is to roll over like a dog, raise my arms up in surrender from
down on my back. What the hell, maybe he’ll give me a belly rub.

But even a white-flag maneuver like
surrender doesn’t stop the former French Foreign Legionnaire from lowering
himself onto one knee, making a fist with a hand the size of the Loch Ness
monster, cocking it back. Squeezing my eyelids closed, I await the death blow.

But it never comes. In its place comes
a gentle, if not haunting voice.

“You will not harm that man any
longer.”

The voice isn’t deep, but it isn’t
high either. The tone is soft and peaceful, like the sound of a gentle breeze
blowing off a calm lake. The accent isn’t Italian or anything European for that
matter. More like American. Maybe even New Yorkian. The East Coast anyway.

I open my eyes to see a silhouette
of a man. A big man, who stands over me, the high afternoon sun positioned
directly behind his back. The dark figure is imposing, the head shaped more
like a bullet or a howitzer shell, the apex coming to a distinct, sharp peak.
It isn’t until he bends down, offers me his hand, that I see his face and
realize he’s wearing a black and gold turban.

He kneels down, offering me his
hand.

“My name is Iqbal… Dr. Iqbal Lamba
Singh. They told me I would find you here.”

“The Florence Police and Fire Brigade.”

“They know me so well I guess.”

He smiles warmly, his smooth tan
face gentle but intense at the same time. I take his hand and he pulls me up
like he’s capable of dead-lifting a sacred cow.

Dr. Singh does something
extraordinary. He turns completely around and faces down Calum. At first, the
former Legionnaire clenches his fists, raising the right one, cocking it back
at the elbow like he’s about to lay my turban-wearing savior out. But Dr. Singh
stands his ground, arms relaxed at his sides, fingers open, legs slightly
spread at shoulder length. Eyes wide, he initiates a staring contest with Calum.
It’s as if the doctor’s gaze is a tractor beam that locks not onto Calum’s blue
eyes, but into them. Into his Guinness-soaked his brain. The soldier turned piss
poor card shark can’t avert his gaze even if he wants to.

Chill Waters by Hovey, Joan Hall
Paradise Found by Dorothy Vernon
Seaweed on the Street by Stanley Evans
Moonstone Promise by Karen Wood
Bilingual Being by Kathleen Saint-Onge
The Election by Jerome Teel
M. Donice Byrd - The Warner Saga by No Unspoken Promises
Jazz Funeral by Smith, Julie
Down into Darkness by David Lawrence
The Sisters by Robert Littell
Our partner