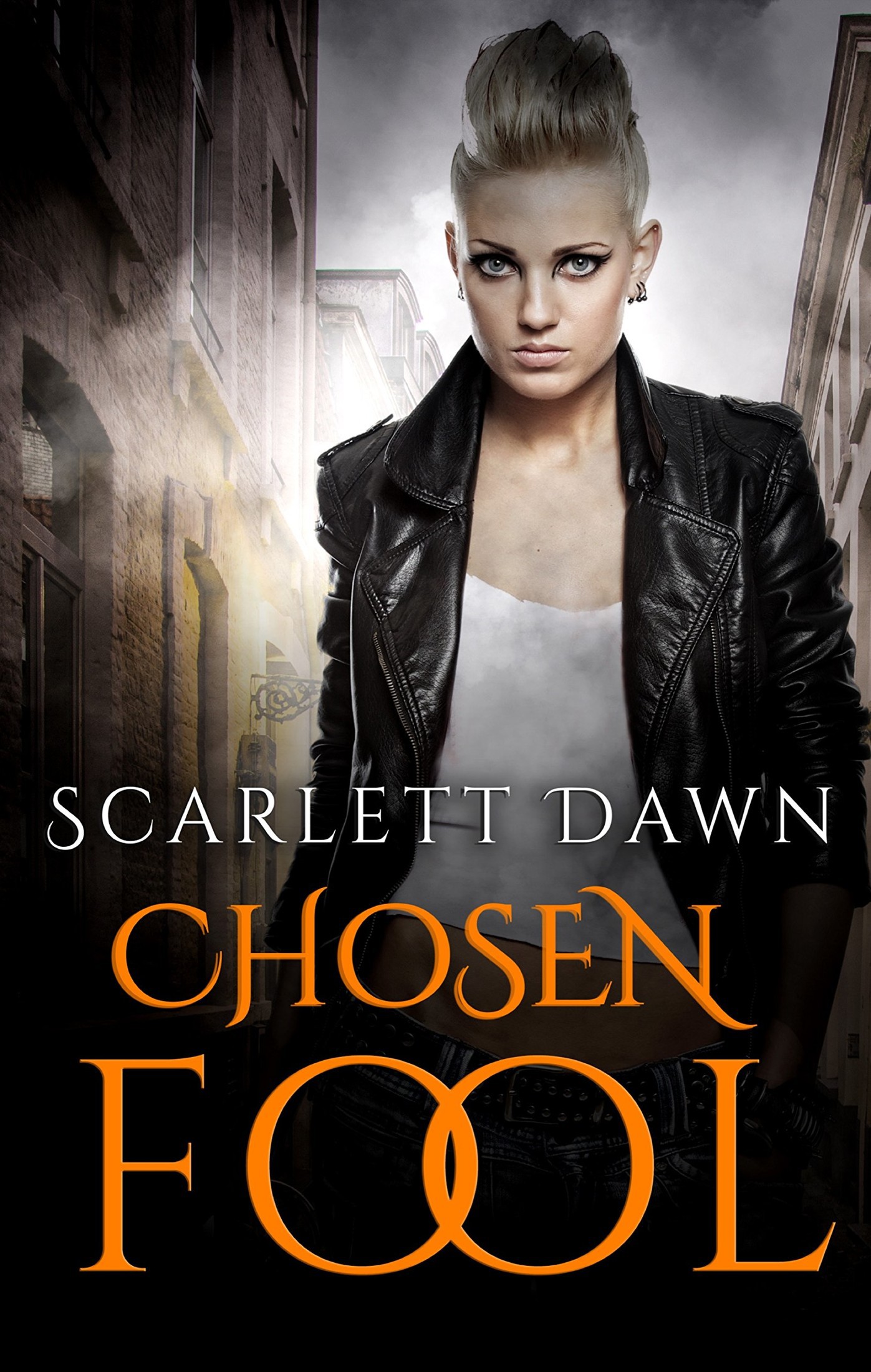 Caroline Jules has received the news of a lifetime. She’s going to be Queen to ‘her’ people. Instead of running, as any sane criminal would, she faces the mêlée with all the wits and savvy that her difficult life has honed. With her best friend, Sin, at her side, Caro pushes past the animosity her power inevitably brings, and prepares to rewrite her future.

Until the night Sin leaves, and she is alone.

Now, Caro must face the Royal world and all its intrigues and intricacies by herself. People aren’t always as they appear—and danger lurks behind even the most pleasant face. When a threat not even the Elders can handle puts her new tribe in danger, Caro takes matters into her own hands. Armed with the power of the mysterious spirit Elementals, Caro is determined to eliminate the evil ransacking the Mysticals. All she needs is time.

But time waits for no fool…and time isn’t as straightforward as it seems.

She lives in the Midwest of the United States, adores her music loud, and demands her fries covered in melted cheese.

Thank you to my family who listens with a creative mind, knows when to back away, and can still cheer me on.

You are my all.

You aren’t just a managing editor.

You are a friend.

Forever blessed to know you,

“How did I get talked into this?” I mumbled under my breath. I sat sideways on the seat inside the black, armored limo, staring wide-eyed. The enormous ski mounts were covered with the hated white stuff. Viewing the Colorado mountains from high above in the private jet hadn’t been atrocious, but now they were much more immense as we approached them on ground level—and a shit-ton more painful. I would much rather be jumping over a ravine on a powerful bike than sliding down a peak at unstoppable speeds on slippery skis.

Leric placed his right arm on the back of the leather bench seat, tilting his head so he could gauge my reaction. I merely continued gawking at the mountains, my gaze trapped on the cause of the hurt that was to come—because those shimmering peaks sure as hell didn’t contain bunny slopes anywhere. He asked on a quiet hum, “You’re really that bad?”

My jaw clenched, but I nodded once. “Sin has a tally of how many times I’ve fallen.”

They would all see. There was no point in fibbing about the issue.

On the bench seat across from us, Sin chuckled softly. “Let’s just say, it’s in the high triple digits. Bordering on four.
And
she’s only skied six times.”

“No way,” Aria griped from the back seat, sitting next to King Zeller, her own eyes squinted in worry. “If I’m getting out there, so are you.”

“First time?” I asked, jerking my attention away from the horrifying view and turning to sit properly on my seat. It pleased me that Leric didn’t remove his arm from behind me, his body’s warmth creeping through the frigidness in my bones. “Please tell me you’re a newbie? Or you suck just as bad as I do?”

Her chin lifted with haughty flare, a sure sign she was the Prodigy Vampire, about to be Queen. But she still grumbled, “I’ve skied twice in my life. Both times ended with me on my face or ass more than I was on my feet.” She groaned, shrugging an attractive shoulder. “I think it’s my speed or my sight, but either way my balance is completely off.”

King Zeller ran a hand over his face, staring out the windows, his expression blank. “I haven’t skied, either, in a very long time.” Absently, he patted Aria’s left leg. “Just be careful out there. I once lost someone on the slopes, and I’d hate to lose another.”

Aria gawked at his profile. “Was that supposed to be encouraging?”

“No.” He thrummed his fingers on the armrest between them, not even glancing at her, his attention still outside. “It was a warning.”

My eyebrows rose at his blunt honesty.

Aria peered at me, her words dry. “This is the caring nature I’ve dealt with for years.”

Sin hummed for a beat, and then he murmured softly, “Aria, often compassion is expressed through realistic truths.” He tilted his head slightly to King Zeller, but his green eyes were steadfast on her. “For someone who speaks of being caring, you didn’t ask the correct question.”

Aria blinked slowly, but a moment later her attention turned to King Zeller. Her lips parted, but his hand flicked up, stopping whatever she was going to say.

King Zeller’s spring green eyes darted to Sin’s then back out the window as he dropped his hand. His words were even and simply stated. “I lost my mate while we were skiing.” Aria—hell, all the occupants inside the limo—went utterly motionless as he laid his past out there. His attention swung from the picturesque town we were now driving through to stare into her wide, possibly contrite eyes. His lips lifted in a soft smile, a genuine show of affection for her. “Aria, it’s all right. It was a very long time ago. I’ve recovered since then.” He patted her leg again, his countenance quickly altering. Eyes narrowed, he ordered, “Just be careful.”

Aria swallowed, her mouth shutting delicately. She nodded a bit too swiftly. “Of course.” Her jaw flexed, then she quickly blurted, “I’m sorry for my insensitive comment. I should have asked whom you lost instead of being impolite.”

King Zeller’s eyebrows rose at her apology. “Thank you.” Before he turned back to the view outside, his gaze ran across Sin again, a thoughtful expression on his face. Then, with his scrutiny out the window once more, he stated, “Strangely, Sin, having you around isn’t all bad.”

Sin chuckled low, sounding evil. He stretched his long legs in front of him, his feet brushing mine and resting there. “I’ll have to work on that.”

King Zeller actually laughed with him. “Wouldn’t want to taint your reputation?”

Sin dipped his head in agreement. “Just as you wouldn’t wish to tarnish yours.”

Shrieking, I dropped my poles when pure ice had my skis jerking backward—as my body went forward. Throwing my mittened hands out, I barely caught the majority of my weight before my face ate too much snow. My skis miraculously stayed attached to my boots but they twisted my legs at an odd angle. With my heart racing, I lifted my face from the freezing shit. I stared down at it as I shook my head, knocking the burning chunks of hell from my cheeks and mouth.

“Nine hundred and forty-three,” Sin droned, damn near everyone in our large group snickering quietly. We had just placed our skis on the snow behind the lodge we were staying at. “Caro, perhaps you should stay here on even ground and practice for a while.”

Yes, he was serious.

“It’s not even,” I grumbled, my cheeks flaming. “I was standing on an incline.”

London actually started choking on an outright laugh, but I was pretty sure his mate, Cia, had something to do with his grunt—and silence—afterward.

An enormous muscled arm dug under my waist through the snow, easily lifting me completely off my feet, my skis dangling in the air. My back was crushed against a hard chest wrapped in a soft jacket. I wiped the icicles off my lashes with the back of my mittens, the dry side, and blinked out at the amused group. My cheeks still blazed bright red, and I tilted my head to the side to stare up at whoever held me.

I should have known.

Under a white, silver-trimmed knit cap, his white rolls of hair rested on a white and silver jacket. His tanned skin was right at home in the sun’s rays shining down on us. The black tattoo around his eyes only enhanced the sparkle to his silver eyes as he stared down into my own gaze, his lips twitching and his chin actually trembling. But in his defense, he wasn’t laughing when he stated steadily, “I’m sure you’re correct. No one else was standing where you were. There probably is a…slight incline.”

My chin lifted despite my humiliation. “There is. So be careful of that spot.” I wiggled my dangling skis. “Think you can set me down now?”

His chest shook against my back. “Are you sure you want me to?”

No point in lying. “Not really, but I don’t want to hold up our group any longer.”

His eyes twinkled, but he slowly lowered me. He kept a steadying hand on me when I again wobbled—even standing completely still between his own skis. “Sin may have a point, Sprite. Staying on even ground would definitely be safer for you.”

I snatched the poles that Brann handed me and jabbed them into the snow, griping over my shoulder, “No one’s asked you, Leric. Can you even ski?” The Temple was vast, and had many areas I hadn’t seen, but during my time there I hadn’t come across a place to ski.

Leric gripped one side of my hips, keeping me upright between his legs. “Yes, I know how to ski.” His voice was a deep, intimate purr. “I enjoy all sports…extreme.”

I blinked at the blatant sexual suggestion, shoving away with my poles from his protective stance, but warming instantly at his tone. I was incredibly surprised at his words not only said in front of everyone, but also after he had called it quits between us.

My train-wrecked thoughts caused me to forget about my footing for a moment, which was now moving thanks to pushing away from Leric.

I squealed as I really did hit a small drop, unable to stop as I shot right between King Collins and Elder Farrar, my flailing poles thumping them—hopefully in the stomach and not any lower—causing them to grumble as I sped past. The wind licked against my face as I slid down where Coms and Mysticals waited in line for the lift up the slope.

I outright screamed, waving my poles at them to fucking
move
!

So yeah, my pathetic ass took down an enormous Shifter.

Or perhaps he took me down.

Either way, we ended up in a pile of tangled limbs, skis, and poles, my nose planted firmly in the snow all over again, while a mammoth chest smashed the back of my head down into it. I was pretty sure I heard what was a bear growl emit from his throat before he muttered a very unkind curse.

I couldn’t blame him. I had hit him
hard
.

Luckily, he hopped up with ease.

Unluckily, he grabbed the back of my jacket and lifted me straight in the air until my face was level with his. The enormous paw he used to hold the back of my jacket kept my torso parallel to the ground and my feet kicking as they dangled—sans skis now—while he stared me in the eyes. He was more than a little aggravated, his rugged features stained with red heat.