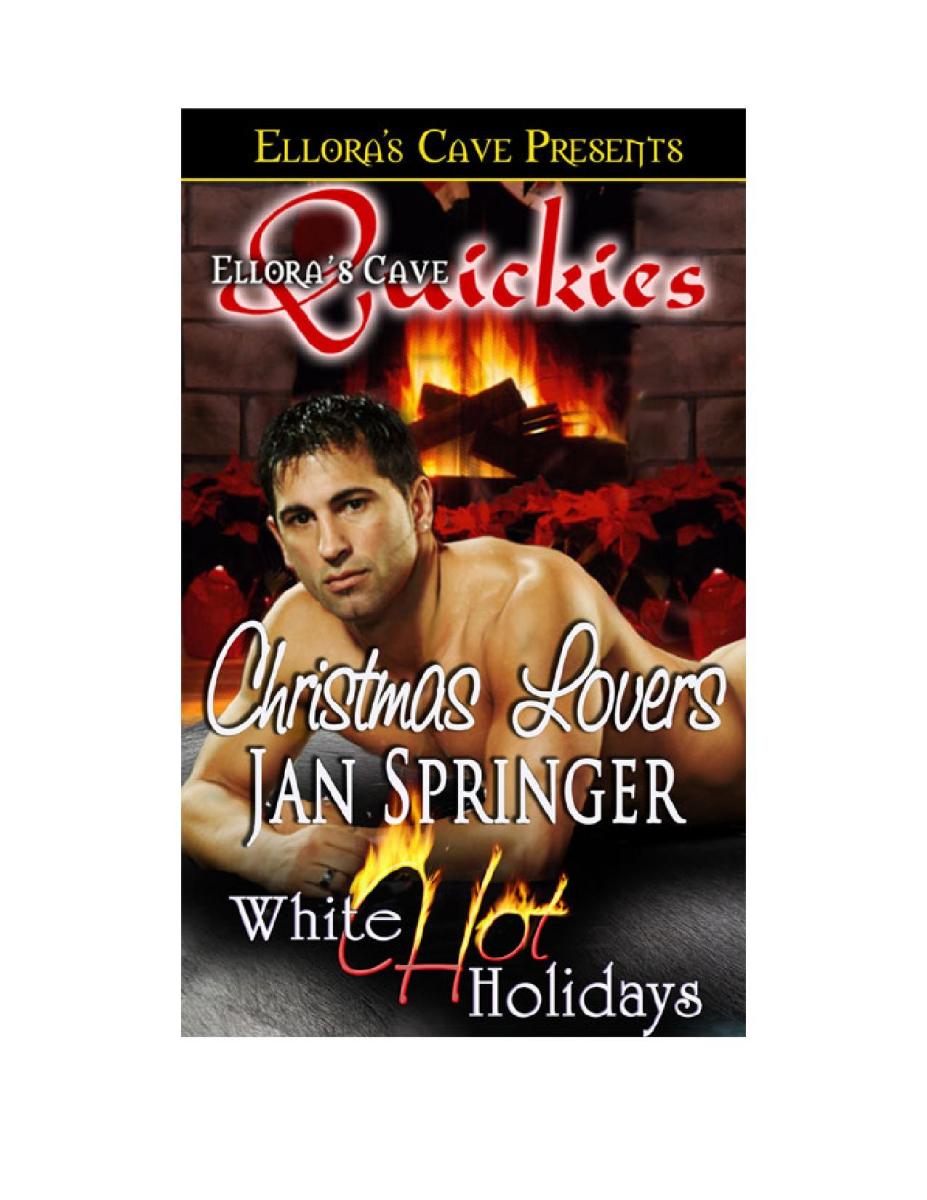 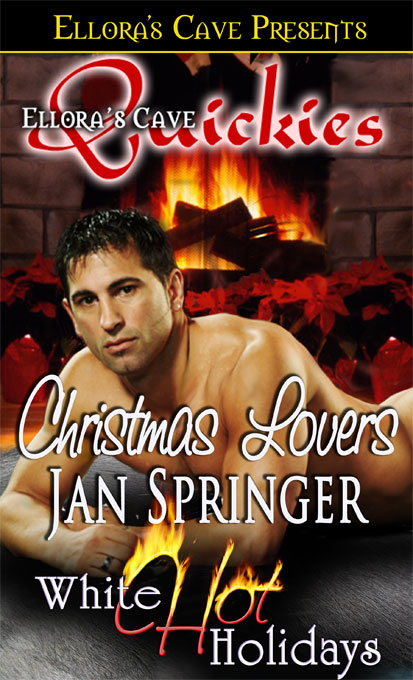 This book may not be reproduced or used in whole or in part by any means existing without written permission from the publisher, Ellora’s Cave Publishing, Inc.® 1056 Home Avenue, Akron OH 443103502.

E-
rotic
love scenes are explicit, leave nothing to the imagination, and are high in volume per the overall word count. In addition, some E-rated titles might contain fantasy material that some readers find objectionable, such as bondage, submission, same sex encounters, forced seductions, and so forth. E-rated titles are the most graphic titles we carry; it is common, for instance, for an author to use words such as

“fucking”, “cock”, “pussy”, and such within their work of literature.

X-
treme
titles differ from E-rated titles only in plot premise and storyline execution. Unlike E-rated titles, stories designated with the letter X tend to contain controversial subject matter not for the faint of heart.

Dedicated to wounded soldiers and the wonderful nurses who care for them.
May God bless and protect you.

And, as always, for Mary Moran. Thanks for your wonderful support.

So much fucking pain he could just scream as he lay helpless in the U.S. military hospital bed they’d brought him to.

He remembered the nurse, the one with the soft voice he’d immediately fallen in love with, saying something about burns, broken bones to his lower legs. A shrapnel wound near his heart. A concussion. Temporary blindness. Shit, he was a freaking mess, wasn’t he?

But he’d been stabilized overseas. Brought back to the States at the direction of his brothers. They’d pulled heavy-duty strings getting him there so fast. They’d wanted him recuperating close to home and not in some foreign country. Snatches of memories sifted through his mind. Memories of an explosion. Searing heat. Too bright orange flames.

He remembered the agonized cries. His buddies cries, the feeling of helplessness. The terror and then the thankful darkness.

She was back on duty and he felt relieved. She always smelled so damned good and her soft touches were quick to settle his uneasiness. Quick to make the memories of that horrible day disappear.

“I can see they took the bandages off your eyes.”

Her voice sounded so sexy. Intimate. As if he were the only man in the world for her. She moved into his field of vision and he finally saw her for the first time. 5

Sexy chocolate brown eyes and a wild tangle of blonde hair greeted him. Her plump cheeks were flushed a pretty pink as if she’d just come in from a brisk walk. Her mouth…perfection.

The sweet knot that had settled into his lower belly the first time he’d heard her voice a few days ago turned into something else. Turned into a scorching, driving need. A craving to have her soft, warm lips wrap around his cock.

“You can see me okay, soldier?”

Soldier, her nickname for him. He bet she called all the boys that. He nodded.

She smiled. Dimples exploded in her cheeks and he fell in love with her all over again.

Oh man! Was he already experiencing the infamous Florence Nightingale Syndrome soldiers talked about? Had he fallen in love with the nurse who was caring for him?

Fuck, if that were the case, then he was in really big trouble. And so was his cock.

“Time for your sponge bath, soldier.” Her soft voice drifted out of the darkness and Sergeant Connor Jordan’s eyes flickered open to find Nurse Sparks standing there, the green privacy curtain drawn around his hospital bed.

At the hungry look sparkling in her brown eyes, his cock hardened into a hot and pulsing rod of lust. He gritted his teeth as his balls tightened with arousal. He knew she wanted him. He wanted her too. Had seen the need, the desperation to be fucked every time she came in at night to give him a sponge bath. He wanted her so fucking bad he would jump her bones the minute she gave him permission. Swallowing back his excitement, he watched her slide the basin with steaming water onto the nearby table then she pulled away the blanket covering him. Gently she lifted the hospital gown and her eyes widened slightly as she saw his full-blown erection.

Licking her lips with that cute pink tongue of hers, she sat down on the edge of his bed.

“I can see you’re feeling much better, soldier.”

“I always feel damned good when you come for a visit, Florence.”

She smiled at the nickname he’d given her after the famous nurse who’d taken care of wounded soldiers during the 1800s.

“Perhaps I should take care of your newest…medical condition?” she said softly. He held his breath as warm feminine fingers wrapped tightly around the base of his standing-at-attention erection. Her other hand began a rough massage of his scrotum, her fingers manipulating the swollen balls inside.

Fuck! She was good!

She touched her lips to the tip of his purple plum-shaped cock head then gave him a couple of slow, seductive licks.

“How’s that feel, soldier boy?” she turned her head and smiled over at him. Lust glittered in those baby browns.

He nodded eagerly and watched as his favorite nurse parted her full red lips and his smooth cock head disappeared into her hot, moist mouth. Oh man! He loved the feel of her tight flesh wrapped around his sensitive rod. Loved the way she hollowed out her cheeks and began a wicked sucking motion that rocked him right to his core.

Slurping sounds ripped through the air as her head bobbed up and down his shaft, the sensual movements sending her blonde tangled curls into an untamed flurry. She devoured him like a true professional. Slid his cock out of her lusciously tight mouth and then back in again. He groaned as she used her sharp teeth on him, nipping his foreskin every once in a while. The friction made his cock jump, made his breaths come harsher, faster. He cried out as her long fingers increased the pressure against his swollen sac.

The pleasure spread. His body grew hot, tight. Blood pumped into his cock and balls. He knew he was on the verge of coming. Knew this was going to be a fantastic orgasm.

At the sound of his oldest brother Ethan’s voice, Connor’s fantasy vanished, leaving him with painfully hard balls and one hell of an erection. A chorus of rowdy laughter intermingling with jolly Christmas music crashed in around him. He blinked and shook 8

his head, remembering he’d been released from the hospital over a month ago and his three brothers had brought him to this noisy bar to celebrate the anniversary.

“Where the hell did you zone out to? Florence Nightingale land again?” Ethan laughed as his brothers all leaned forward to watch him curiously from their barstools. Florence Nightingale, Connor’s nickname for Nurse Sparks, the gorgeous tanglehaired nurse who’d cared for him at the military hospital in Maryland. His brothers had all kidded him about her. Had joked with her every time she’d come to give him a sponge bath or change the dressings on his burns and wounds or administer his meds.

“By the smile on his face he had to be thinking about her. Hell, if it had been me in that hospital bed and totally at her mercy, I’d have gotten that cute, sexy blonde nurse to—” A sharp elbow to Jake’s side from Ethan shut him up.

“Don’t worry, bro, we have the cure for what ails you,” his youngest brother Lee said. The sound of his hand slapping against the bar in front of him caught his attention.

“Our Christmas gift to you, man,” Ethan said softly.

He noticed his brothers were now silent, their faces serious.

“We thought you would die from your injuries, man,” Lee said. His green eyes were intense, his voice thick with emotion.

“Yeah, man. We thought we’d lost you over there.” Jake frowned and shoved a hand through his long brown hair.

Christ! Did he detect tears in all their eyes?

“Ever the fucking modest one, aren’t you?” Jake shook his head. “They said you were dead twice on the operating table.”

“Do I look dead?” Connor chuckled.

Fuck! He sure didn’t feel dead, especially with this swollen erection he’d been toting around since laying his ears and eyes on Nurse Tangle Sparks.

“Enough of this mushy shit,” Lee continued. “We pooled together and got you a Christmas holiday sex-fest compliments of Kidnap Fantasies—it’s a top secret fantasy business.”

Connor couldn’t help but chuckle. “So much for it being top secret if all you guys know about it.”

“We’ve all taken a vow of secrecy. We trust you won’t blow the organization’s cover.” Lee grinned.

“He wouldn’t dream of it.” Jake chuckled. “Especially when they make every man’s wildest fantasy come true.”

Every man’s wildest fantasy come true?
Hmm, he could think of quite a lot of fantasies he wouldn’t mind trying out on a certain tangle-haired blonde nurse. More hot blood pumped into his already tight and painful shaft. He made a move to pick up the brochure but his brothers shook their heads as the bartender slapped another round of frothing beers onto the countertop.

“No way, buddy brother. Look at that brochure and answer the questionnaire on your own time—right now we party on you getting out of that hospital. Right, boys?”

Connor reluctantly let the brochure drop back onto the bar. Partying was suddenly the last thing he felt like doing. He’d rather go back to his apartment and check out what kind of a place would dare to advertise they could make his fantasies come true.