Cinderella Dressed in Ashes ( Book #2 in the Grimm Diaries ) 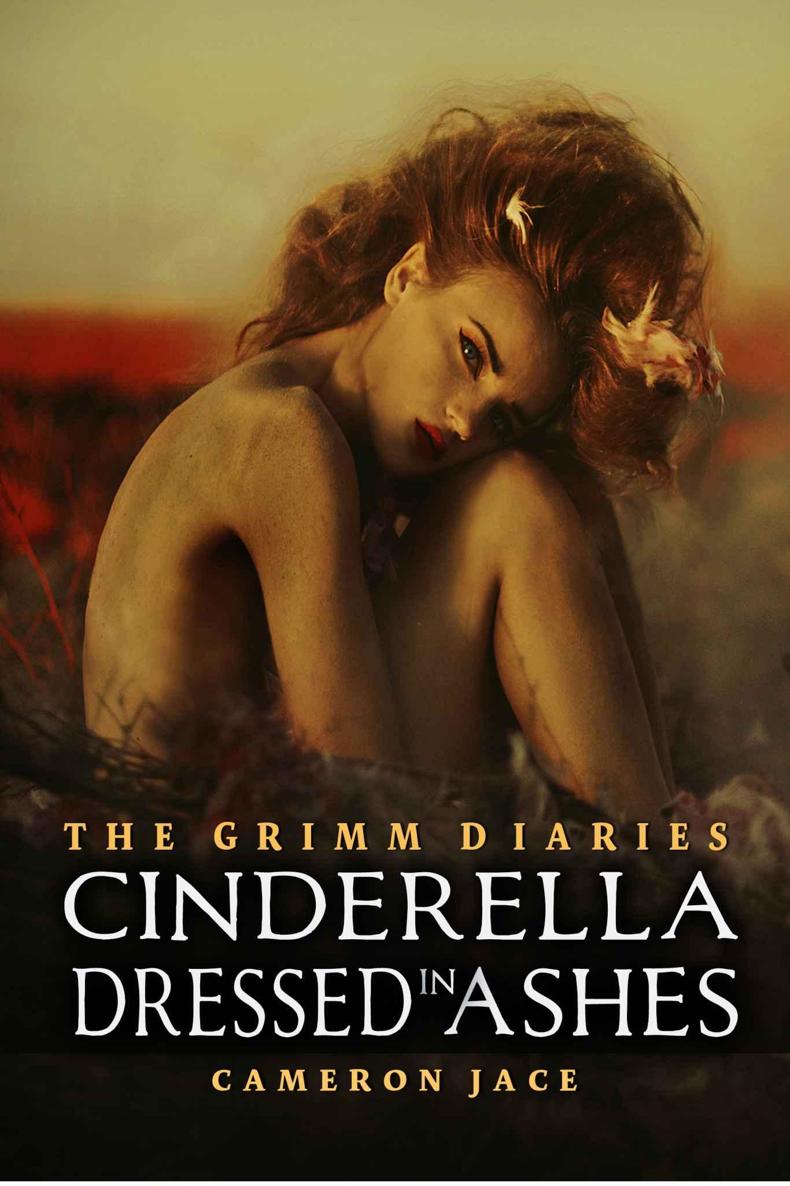 All rights are reserved. No part of this book may be used or reproduced in any manner whatsoever without written permission from the author.

The following quotes might be too many, but if you come back to them after you finish reading the book, I believe you will appreciate them even more.

‘Enjoy life. There's plenty of time to be dead.’

“Love is like death, it must come to us all…but never can it be cheated, and never will it be forgotten.”

“…for obvious reasons, I have changed the names of the people and places concerned…”

in his  preface to the 1901 Icelandic edition of Dracula
.

All historical facts mentioned in this book are real, documented, and well researched. The interpretations and connection made are a work of fiction though.

A Splinter of Mirrors

A World Between Dreams

A Garden of Graves

The Heart of the Art

A Field of Dreams

Of Tears and Sand

The Girl with One Glass Shoe

The Princess and the Pauper

A Trail of Breadcrumbs and Candy

A Sack Full of Dead Children

A Breath of Magic

A Bird of Fire

A Puzzle of Seven Cards

A Massacre in Furry Tell

The Name of the Huntsman

A Slash from the Past

The Name of the Necklace

The Weighing of the Soul

A Conversation with Death

A Breath of Life

A Path of Butterflies

A Wit of Swords

The Cottage and the Wolf

A Girl with no Hands

Back to Candy House

A Splinter of Mirrors

The Children of Hamlin didn’t care for the woman in the luxurious black veil.

She claimed that Charmwill Glimmer sent her to tell them a crucially important story, one that would expose a great secret about the evil in the Fairyworld.

Still, the children didn’t like that most of her face was concealed. They could only see her distant blue eyes and long eyelashes, and the silken white gloves she wore.

“Where is Charmwill?” the lisping girl asked suspiciously. “Why can’t he tell us the story himthelf?”

“Charmwill is on a faraway quest,” the woman said. “It might take him years before he comes back.”

“That explains why he didn’t appear last Christmas,” a boy supposed. “Santa Claus was worried about him.”

Another boy suggested Charmwill was fighting the evil entities that wanted to steal the Book of Beautiful Lies.

“No, that’s not why he’s away,” a girl with gaping front teeth interrupted. “He’s with The Boy Who was a Shadow, right?”

“Something like that,” the woman nodded. Her voice was flat and lacked passion. She wasn’t as cheerful as Charmwill, reminding them of their overly conservative parents in Hamlin. She hadn’t even allowed them to play with her veil the way Charmwill let them play with his beard—and she didn’t have a parrot!

“So do you also have a Book of Beautiful Lies?” a boy asked.

“I’m afraid not,” the woman replied, a bit confused.

“Then how will you tell us your story?” the gapped tooth girl frowned.

“Charmwill helped me memorize it,” the woman answered.

“But Charmwill said stories had to be written down,” a girl from the back interrupted. “He said memorizing stories wasn’t enough, because one person tells the story to another, then another, and then another. In the end, the final story will come out different than the original.”

The mysterious woman sighed. She was doing her best not to burst out screaming, “trust me!” She inhaled all the air she could, “I made sure I memorized this story word for word. It’s an important one,” she tilted her head slightly, gazing at them from behind the fire. There was something strange about her eyes. “May I ask why you all call him Charmwill?”

The children laughed mockingly at her, “because he is the famous Charmwill Glimmer, the best storyteller in the world.” A girl said and raised her hands in the air. Other kids imitated her.

“So he has never told you his real name?” The woman’s eyes dimmed with confusion.

“What are you talking about?” the lisping girl asked. “That is his real name!”

The woman squinted behind the fire. She was thinking while rubbing her chin over the veil. A moment later, her eyes widened, “I was just joking with you. Of course, that’s his real name. Now if you don’t mind, I’d like to tell my story,” she rubbed her hands together with fake enthusiasm.

The boys and girls sighed, a bit sleepy, mumbling a ‘yes’ or two between the lot of them. They doubted anyone could match Charmwill’s skills in storytelling, but thought they would give her the chance to try.

She began, “Once upon a time…”

“Is this going to be boring?” the lisping girl asked. “All
stories
that start with ‘
Onth
upon a time’ end with ‘And they lived happily ever after.’ It’s so boring.”

“So lame,” a boy commented.

“As if we don’t know how it’s going to end,” the girl from the back said. “That’s why we like Charmwill’s stories. They are different. Full of darkness, humor, intrigue and mystery.”

“Yeth. You never know who’s who in his stories,” the lisping girl said. “And it’s hard to tell who’s good and who is evil.”

“Oh, so you don’t like it when you can differentiate between good and evil?” the woman inquired.

“Charmwill said there is nothing absolutely good or evil,” the girl in the back said. “It’s our choice to make it one way or the other.”

“Indeed,” the woman in the veil looked like she was smiling behind the luxurious fabric. “Evil is a point of view.”

“So why does everyone else tell us happy and clichéd storieth? Who do they think we are?
Children
?” the lisping girl protested.

The woman in the veil sighed again. It was a longer sigh, and it exposed her lack of patience with children.  Her blue eyes grew more distant as if she secretly loathed them. “When I was your age, I used to love those happy, fluffy stories,” she said, almost regretfully.

“I bet you don’t like them that much now,” the girl in the back said.

“You bet I don’t,” the woman in the veil rolled her eyes. “Like I said, Charmwill told me to tell you this story, so it’s full of all the horrible things you just asked for. In fact,” she leaned closer, the children’s reflection showing in her eyes, waving in the flaring fire. “This particular story has the devil in it.”

A couple of children leaned back as if the woman breathed fire in their faces. The lisping girl bravely stretched her hands to protect the rest.

“So this story is really scary?” the girl from the back asked.

“Very scary,” the woman’s voice changed and her eyes sparkled. “You can tell from the very first sentence. Listen: On a dark and stormy night…”

The wind hissed and puffed around the fire, and the children sensed a dark spirit behind them in the forest.

Slowly, they leaned forward.  Scary was exciting and fun. They were willing to listen.

“On a dark and stormy night in Hell,” the woman in the veil began. “The devil was bored.”

The girl in the back omitted a laugh. It sounded as if she was sneezing. The woman threw her a piercing look and the girl froze.

“The devil, who was nothing but a short and ugly looking troll, spent most of his time trimming his nails, shooting darts, popping his knuckles, and rubbing the three little hairs he had left on his head,” the woman in the veil elaborated. “He tried to fish in one of Hell’s many lakes but the fish came out fried. Nothing eased his boredom until one of his students brought him a gift, a mirror.

“He hadn’t seen such a mirror before, and being infatuated by his own image, the devil played chess with his reflection. It was an intense game. His reflection was smart, and it replicated almost all of his moves and then added its own genius touch. Surprisingly, the devil, who thought he’d never lose a game—for he was master of evil play—, lost to his reflection in the mirror,” the woman’s eyes scanned the children, making sure they followed with attention. The children felt unsettled by her voice. It had enough power to cement their feet to the ground. Her voice was the color of fear.

“Appalled by his reflection beating him in the chess game, the devil asked about the origin of the mirror,” the woman continued. “In his time, humans hadn’t invented mirrors yet. Someone from an unknown realm had sent him this mirror. The students who found it claimed a lady had just flung it while walking in a burning garden.”

“The devil pulled the mirror along and made his students look into it. The mirror turned their faces into ugly shapes like those you see in a funhouse; only this one truly reflected the bad side in people. Amused, he directed the mirror toward a landscape known for its beauty. Instead of seeing beautiful greens, he saw the place as if it were boiling like rotten spinach then combusting into flames.”

“’Whose mirror is this?’ the devil asked.

“One of his students claimed that the mirror whispered to her when she held it. She said the mirror claimed it had a name, the Anderson Mirror.