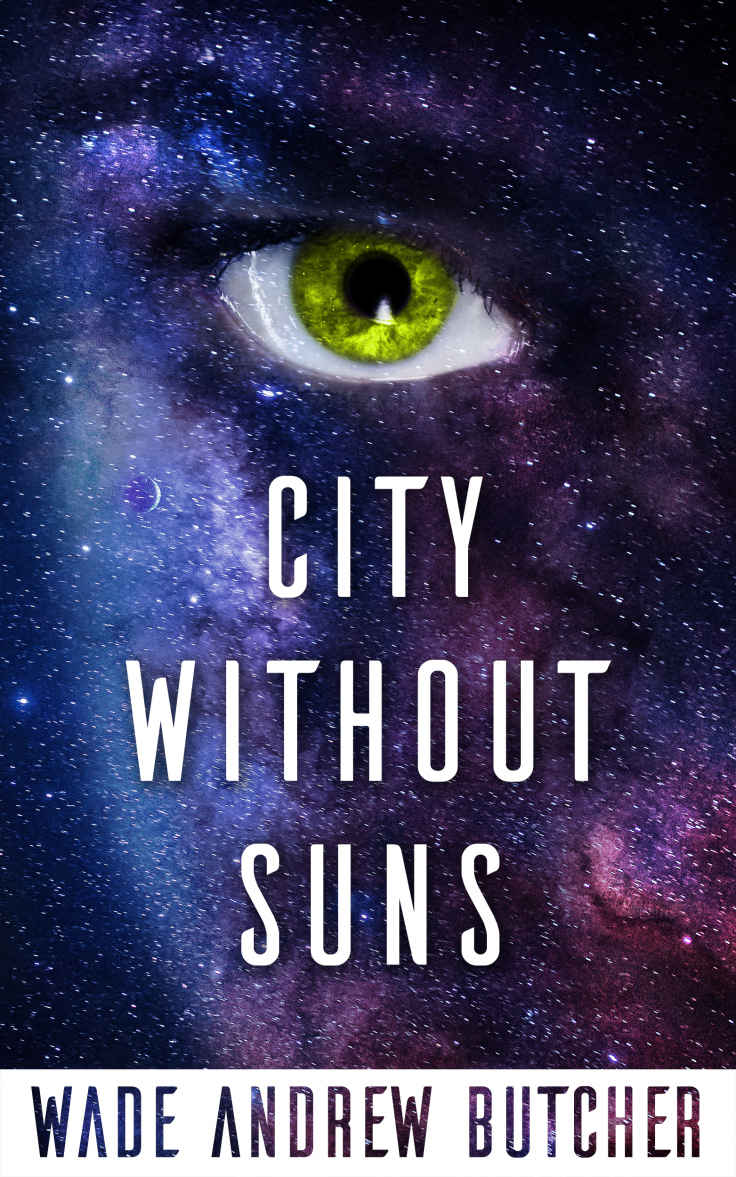 This is instead dedicated to my father Wade. I would have liked to give him something before his life ended long ago.  He would have enjoyed it.

I was there to see the Saturn V rockets launch.  The rockets could not be seen clearly from my distant backyard in the beach town of Indialantic, but the trail of fire against the blue Florida sky burned images in my memory.  I was only three years old the first time I saw a launch.  From that point forward, I grew up thinking such achievements were normal.  When the space shuttle launched a little more than a decade later, I remember thinking –
what? It’s just going to orbit Earth?
It seemed anticlimactic.  Since then, age and experience have taught me just how amazing that time and place was.  The pride (and humility) I felt wearing an Apollo 15 patch on my little blue windbreaker may have planted a seed in my mind.  After years of thinking about it, I finally nursed that seed into a story.

Some of the characters and events might be impossible, but then again, the people who built the pyramids probably would not have imagined the Saturn V rockets.  For example, the idea of antigravity is widely regarded as impossible, but something about this topic really bothers me.  Maybe I am just another in a long list of wishful thinkers hoping that gravity can be defeated.  The search for gravity waves, the postulation of gravitons, the discovery of the Higgs boson, and the failure to devise a widely accepted Grand Unified Theory (which interested me well over thirty years ago) all cast doubts on my confidence that general relativity tells the whole story.  Gravity shielding and antigravity are not by any means original concepts, nor is the idea of a generational spaceship.  This is an understatement.  I unapologetically used them in my story anyway because they are not the most important elements of the book.  I trust there are enough twists and turns to keep my readers interested.  It is a story of hope, perseverance, and redemption.

Somewhere in the process of this writing through all the ups and downs, a result very close to the original vision has emerged. I hope you enjoy it and will check out my work to come.

The Dark One in the Midst

by Jonathan Seaman, Advisor to the Historian,

Dr. Bishop, thank you for sitting with us.  It is a privilege.

My pleasure.  I have to admit, the opportunity to write history for the future generations in space was not completely unselfish.  If they survive, I have the chance to preserve my story for them, so the pleasure is mine.

Yes, it is an exciting time.  Before we talk about the upcoming launch, I do want to get into your story, because I’m sure it is one that will interest future readers.  Tell us, when did you first decide to create the Islands?

As you know, popular belief is that it was for tax evasion.  That is not true.  In fact, that would be ridiculous because it cost far more to build than what I would have saved.  But it is true that I thought about it when I was furious over the taxation of my family wealth.  My ex-wife joked with me that I should just move to the middle of the ocean.  I thought – maybe I will.

Not many would have thought it possible to build that structure in the middle of the ocean.

Well, it wasn’t easy, and it’s not finished.  The visible parts rest on top of a mile-deep web of underwater structures.  That space is still expanding.

You mentioned it was not for tax evasion.  What was this massive undertaking for?

The genetic research, primarily.  The experimentation with human DNA was not possible under the laws of any nation we know.  Our critics would say what we do should not be allowed anywhere, but I think we’ve already proven the benefits and long-term advantages of our research.  So I built my own nation.

How many citizens are there now?

And how many of those are, shall we say, modified?

Not many.  Maybe fifty.  And most of the modifications are subtle.  People talk about them like they are inhuman.  They’re not.

Most would agree that some of the modifications are extreme, but let’s turn back to the launch.  If your interest is primarily in the area of genetic research, what is your special interest in the Gambler launch?

Aside from my human interest, which many of us share, I want to help sponsor a second launch after this one.  I also have a vested interest in it for funding.  The IEC is a customer – a very large customer.  The gravity shielding technology we provide brings money in for the Islands.  I partnered with the scientists…

Speaking of funding, many think it immoral for you to amass even more wealth from a technology that arguably should be public, given your family history.

Antigravity. And the speculated gravity stones.

Yes, I understand the argument that the technology should be public.  In fact, all the reports from the public research are available, so in theory, anyone could use that as a starting point just like we did.  We did nothing illegal.  The inventors sought asylum on the Islands, and we figured out how to convert the theories from the research into something that could be produced.  And as to the part about my family wealth, that is overplayed.  The money made by the economy of the Islands does not amass my wealth; it is funneled back into operations and other research.

I guess that is not what is perceived, and some would suggest your family’s medical practice was essentially the benefactor of the wealth of a significant portion of the population.

Honestly, I’m not the one who set that machine in motion.  That was three generations ago.  I think it’s interesting that so many people would willingly spend a hundred percent of their assets to stay alive for a short time.

A short time meaning until the money ran out?

It is rumored…well, never mind.  We should talk more about the launch.  That’s what we’re here for.  The crew is a combination of volunteers and appointees.  A recent appointment is one of your citizens, Leonidas Verga.

Yes, I am sorry to see him go, but happy that one of ours will be included.  And it is an appropriate and important position for him.

He was your Chief of Police, correct?

Yes, and I’m sure he will do as good a job on Gambler as he did on the Islands.  In many respects, the circumstances are similar.  It will be a relatively small and secluded community.

His reputation is reported to be ruthless.

His methods are a means to an end.  You’ll notice there is no crime in my country.  General Mason seems to think highly of him and rightfully so.

Yes, and General Mason knows others on the Islands as well, does he not?  Any chance there will be other Island representatives in the crew?

I don’t think so.  The rosters are pretty well filled at this point aren’t they?

Is that the reason, or is it because you make extradition so difficult?

Commander Leonidas Verga glanced at the memorial quote, the last words of his predecessor. Making signs in deep space to commemorate someone – what a waste of resources, Leonidas thought.  He was beyond tired of the twenty-year old plaque in the command center taking up space next to the monitor screens.  He allowed it to stay in an effort to appease one person, the Chief Pilot on his staff, the only person he cared to keep happy.  That staff member was also the only one that held the same position under the General.  Leonidas allowed him to continue in his role.  Even though none of them would ever see the miserable phantom of a planet they sought, at least he didn’t want an inexperienced Pilot to do something stupid and blow up the ship.  While the Chief Pilot pondered calculations that would not need to be redone for another ten years, Leonidas turned his attention to another matter.

The census of spaceship Gambler was presented to the Commander on another screen as two other staff members stood beside him.  As instructed, the original voyagers were listed in the first section, those at least forty-one and older.  Less than three hundred remained of the original two thousand five hundred twenty-two.  The second section contained one thousand one hundred fifty-seven names of people no older than twenty-three who were born on the ship.  On the first screen, at the top of the list sorted by nationality of origin, three names appeared from Bishop Islands, the manmade country in the middle of the ocean once famous for its scientific endeavors like gravity shields and genetic engineering.  After twenty-three years in space, however, the well-known facts about Earth had faded into distant trivia.

Commander Leonidas Verga skipped over his own name at the top of the list and discounted the second name, that of the warrior El Salazar under his command.  Leonidas fixed his eyes on the third name, Isla Wington.  Strangely, he did not remember her from Earth on the Islands that he policed.  The occupation listed next to her name was Historian, a job he had neither authorized nor seen results.  There was obsolete data in the census list that had not been reviewed by his staff.  He concluded it might have been a position that existed under the previous Commander.

“Number three,” Leonidas called out.  The name was highlighted, and he scanned down the list.

“Commander, sir, I know Isla,” said one of the staff members.

Leonidas replied with more words than he had spoken in two days, “She is well beyond child-bearing age, and she is not occupied with a critical function.  Next page, please.”  He did not move his head as he addressed his subordinate, but as he spoke, he shifted his eyes to the side so the person who interrupted was in view.  He paused for three seconds and then continued examining the list.

He had insisted on doing the review himself this time.  The unaccounted names could not all be dead, and if they were, the bodies were decomposing somewhere on the expansive ship.  Leonidas knew better.  He knew some of them were hiding.  The stolen rations were evidence of that.  Thinking of it made him clench his teeth.  They would be dealt with in the same manner as the ones being marked on the list.  The years of merely banishing people to the lower levels, four kilometers from where they currently stood, were over.

Airmail by Robert Bly
A Gentlewoman's Ravishment by Portia Da Costa
Madness (Revenge Series Book 3) by M.S. Brannon
Flygirl by Sherri L. Smith
The Dark Half of the Sun (The Young Ancients: Timon) by Power, P.S.
Razing Ryker (Dissonance Book 1) by James, Jordanna
Chains of Redemption by Selina Rosen
Simeon's Bride by Alison G. Taylor
Howl by Karen Hood-Caddy
The Book and The Sword by Jin Yong
Our partner