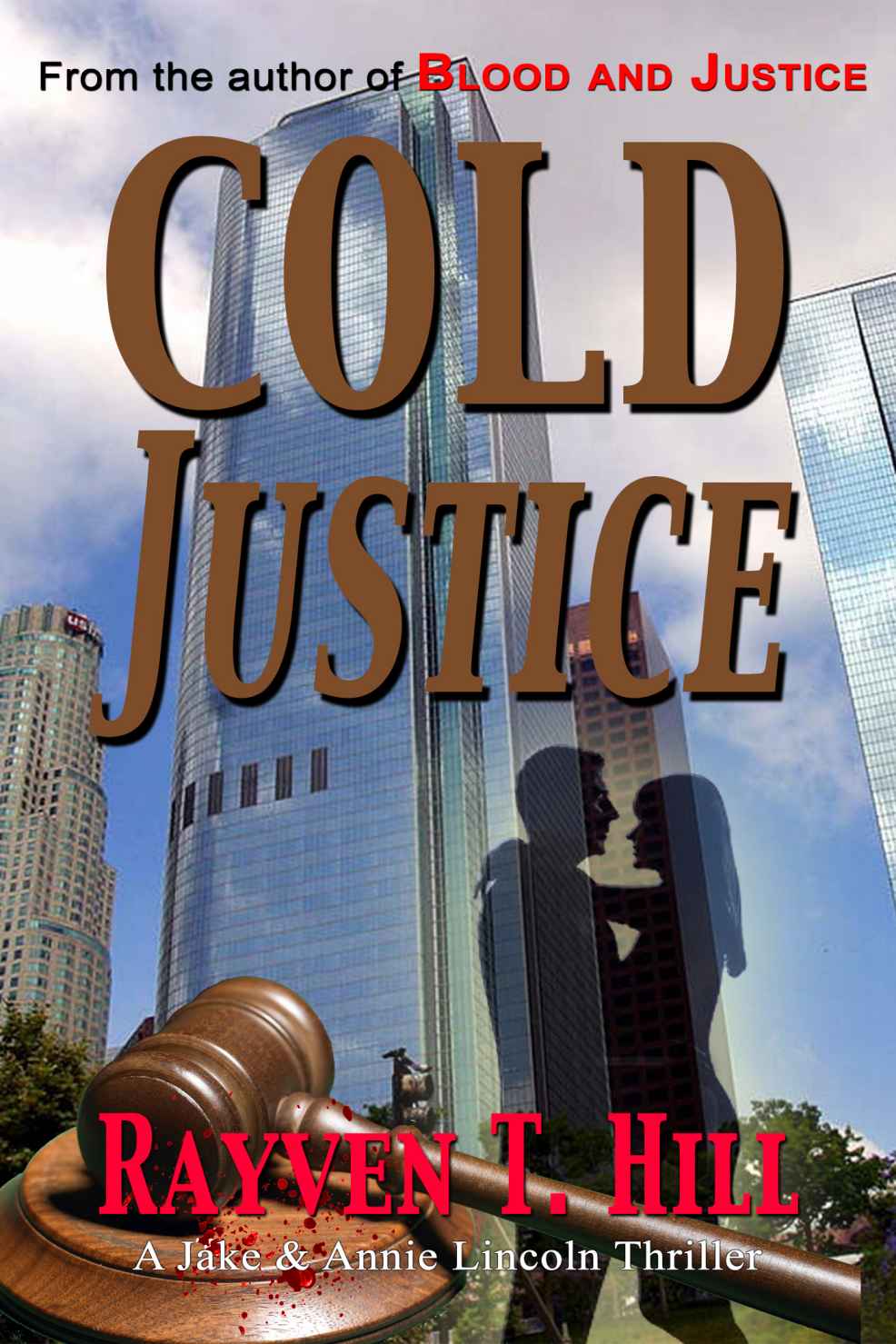 Many thanks to Merry Jones-De
Winter for her hours of editing and proofreading. Her suggestions and insight
have helped streamline the story and smooth out a few bumps. Thanks to beta
readers for your comments and suggestions. Thanks to those who have paid good
money for this book. I hope you got your money’s worth. And not least, thanks
to my wife for her patience. (1003)

Connect
with the Author

You can go his
Web Site
to contact him, sign up for his
newsletter, or get updates on future releases.

Tell
Your Friends About Cold Justice

ABIGAIL MACY’S pain ran deep. Her once beautiful life had
been shattered.

She had never considered herself to be a strong woman, and
the shrink she was seeing twice weekly had concluded she was suffering from
anxiety disorder brought on by her recent tragedy.

She was filled with overwhelming feelings of panic, fear,
uncontrollable obsessive thoughts, and recurring nightmares.

Her job performance had suffered. Personal relationships
were falling apart, and now, she half-staggered the four blocks home,
disappointed the pain she had been feeling earlier, this time had not been
successfully smothered by her evening at Eddie’s.

They had seen her there often lately, as a recent but now
frequent customer. She hated herself for it, but the reprieve helped to dull
her senses.

This time, her effort to gain relief made her pain more
overwhelming, and tonight she sobbed quietly to herself as she walked the dark
street toward her home and her faithful husband.

As she went, she began to feel ill. Physically ill.
Nauseous.

She thought it was another panic attack, but the consumption
of one too many glasses of cheap house wine at Eddie’s had been the cause.

She stopped and took a deep breath. Her queasy stomach was
rebelling. She looked around. The street was quiet, so she stepped off the
sidewalk and leaned over beside a hedge dividing two properties. There she
deposited the contents of her stomach.

She looked up and hoped she hadn’t been seen. There was a
light on in the front room of the house directly in front of her, but no one
was around.

As she turned away, the sound of running footsteps came to
her from the side of the house. She heard a low shriek for help. A woman’s
voice.

She crouched in the shadows, frozen, watching. She saw as
the helpless woman came into view, scrambling and stumbling. She stood rigid,
and motionless, as the half-naked woman was overtaken, grabbed from behind, and
brought to the ground. She saw her attacker kneel beside her, saw his hands go
about her throat and cut short her final scream.

His victim struggled and clawed feebly. Soon all was still
and quiet.

Abigail Macy saw the killer rise to his feet, then lean over
and grab the woman’s hands. He began dragging her across the grass toward the
darkness at the edge of the home.

She felt numb and lightheaded. The branches beside her
rustled and crunched as she rose to her feet. As she stared, open-mouthed, he
stopped and looked up from the shadows, staring into her frightened eyes.

She turned and ran.

She heard him behind her now, and she chanced a glance over
her shoulder. He was close, and getting closer with each step.

Home was just ahead. Home and safety. She forced herself on,
terrified and exhausted.

She stumbled the last few feet and fell onto the brightly
lit steps of her home. She was unable to move, but was relieved to see her
would-be attacker was gone.

After a while, she rose to her feet. She fumbled in her
handbag for her key and opened the door. She fell inside and lay there for a
few minutes before finally slipping quietly upstairs. She was careful not to
wake her sleeping husband as she tiptoed past his room and fell exhausted into
the safe double bed in the guest room.

JAKE LINCOLN sauntered into the home office and plunked his
six foot four inch body into the guest chair in front of the desk, just as
Annie dropped the phone back into its cradle.

“What did they want this time?”

“More of the same. Seems like the whole world wants a piece
now.” Annie leaned back in her chair and looked at her husband.

“Yeah, but we’ve already been on CNN. And FOX, and ABC, and
all the rest of the alphabet.”

“Not exactly a small town, but it makes a good headline.”

“I’m sure it’ll die down once the trial’s over. Meanwhile,
the publicity has been great for business.”

Their office, formerly an unused bedroom, contained only the
bare necessities. A couple of bookcases on one wall were filled with read and
unread novels as well as a few law journals. Others looked like manuals of some
sort, below a row of rarely used and obsolete encyclopedias. A few prints
hanging on the wall completed the look.

“Hi Mom! Hi Dad!” An eight-year-old boy shot into the room
and skidded to a stop.

“Hey Matty, how was school?”

“It was good, Dad. All the kids there think you’re a hero
now. Of course, I had to tell them I knew it all the time.”

Jake laughed. “Your mom’s a hero too.”

“Of course they can, Matty.”

“Nope. She a heroine,” Matty laughed and darted from the
room.

“My son, the linguist,” Annie said.

Lincoln Investigations had been a struggling young
enterprise, employed mainly to obtain evidence for cases of divorce, child
custody matters, missing persons, research into the character or financial
status of individuals, as well as some security work. But when they had
recently been engaged to find a missing child, it turned into much more than
they expected. Catching a serial killer had led to all the publicity they were
now receiving.

Prior to forming their venture into private investigation,
Annie had been a part-time research assistant, while Jake had been a
construction engineer for Cramer Developers. When Jake lost his job due to
downsizing, Annie had to carry the family financially for a while. Her research
experience had led naturally into their current undertaking. Until recently, it
had barely been enough to keep them both busy and keep things afloat.

Annie leaned forward in the swivel chair and dropped her
elbows on the timeworn desk. She picked up a sheet of paper and scanned it
briefly. “All these missing children,” she said with a sigh. “It’s sad.
Everybody’s calling now hoping we can find their missing child. All across the
nation, suddenly they think we’re the experts.”

“I wish we could help them all,” Jake said, “but there’s too
many, and they’re too far away. Anyway, we have a lot of steady local clients
now, so it keeps us busy.”

“Speaking of clients, Edward Franklin from Franklin &
Franklin called.” Annie leafed through a small stack of papers and pulled one
from the pile. “They have some papers to serve. Their regular process server is
on vacation, and they want us to serve a notice to appear in court. I believe
it’s a child custody case.” She handed the paper to Jake.

Jake leaned forward, took the paper, scanned it, and looked
at his watch. “I can probably do this today, or maybe in the morning.” He
folded the paper and tucked it into his shirt pocket. He rubbed his hand
through his short dark hair, stretched, yawned, and then rose to his feet. “But
right now, I need to do a little workout. Matty’ll be down there waiting for
me.”

As Annie stood and walked around the desk, Jake watched her.
He never stopped admiring the trim figure she had kept all the years since he
had known her. At five feet four inches tall, Jake had to willingly lean down
so she could give him a quick kiss. Married for seventeen years, he never grew
tired of that. He looked into her beautiful blue eyes and grinned down at her.

She kissed his grin and said, “I have a few things to clean
up here, so go ahead, lift your weights, or whatever it is you two guys do down
there.” As he let her go and turned to leave, Annie frowned and said, “Make
sure Matty’s careful down there.”

PHILIP MACY was a patient husband. After the tragic death of
their child that had hit them so hard a few weeks ago, he was able to struggle
on, but Abigail just seemed to be getting worse every day. As she grew more
withdrawn, he became increasingly concerned. He was doing his best, and didn’t
know how to do anything else for her other than to be patient and pray she
would improve.

He sighed deeply as he tucked a paper napkin onto the tray
beside the tuna sandwich, a small salad, and a glass of orange juice. He took a
last look at the meal to be sure he had everything prepared, and then carried
the tray from the kitchen and up the steps to the guest bedroom.

Balancing the tray with one hand, he tapped lightly on the
door and pushed it open. Abigail was sitting on the bed, propped up by a couple
of pillows. She was staring at the wall in front of her, taking no notice of
him.

The curtains were drawn to hold back the evening sun,
allowing only a peep of light in, painting a slash of white across the floor.
The overhead light was off. The only thing distilling the otherwise gloomy room
was a small lamp on the night table. He stood still a moment watching her
before he finally approached the bed.

He slid the tray onto the nightstand beside her and sat down
gently on the edge of the bed. “Abby,” he said softly, “I brought you something
to eat.”

She stared at the tray a moment, and then slowly turned her
face toward him. Her eyes were vacant. Her pretty face was haggard, and she
seemed much older than her twenty-five years.

He reached out and gently caressed her long dark hair, once
so beautiful, now unbrushed and uncared for.