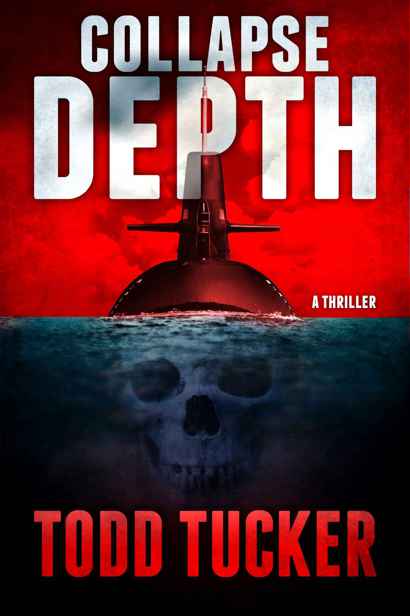 Other Books by Todd Tucker

T
ODD
T
UCKER attended the University of Notre Dame on a full scholarship from the US Navy. After graduating with a degree in history in 1990, he volunteered for the nuclear submarine force, and made six patrols onboard the USS Alabama. He lives in Valparaiso, Indiana.

Other Books by Todd Tucker

Notre Dame vs the Klan: How the Fighting Irish Defeated the Ku Klux Klan

The Great Starvation Experiment: The Heroic Men who Starved so that Millions Could Live

Atomic America: How a Deadly Explosion and a Feared Admiral Changed the Course of Nuclear History

Prayer of Breton fishermen. Given on a plaque to every submarine commanding officer by Admiral Hyman Rickover, the father of the nuclear navy.

F
or three days, as the big container ship
Ever Able
steamed northward from Singapore, Captain Colin Wright listened to the Chinese military circuit. The Chinese had appropriated a radio frequency along with a huge rectangle of ocean, declaring to the seafaring world that both were off limits indefinitely. The Captain didn’t understand a word of Chinese, although he could foresee a day when fluency in Chinese would be required in his profession. But, sensing that it was somehow important, he listened anyway.

He eavesdropped on their chatter in the mess hall while he ate, on the bridge while he stood watch, and in his stateroom as he slept. When he toured the vast cargo areas of the ship, he took with him a handheld radio so he wouldn’t miss a second of the unintelligible conversations that had become his constant companion. He tried to decipher what he could from their tone, which sounded in turn bored, aggressive, frantic, and even taunting. The crew became used to the sound of static and Chinese voices that surrounded their brooding captain like a cloud.

On the third day, as he napped at his desk, he jerked awake. The fragments of a sad dream evaporated as he roused himself. He shook his head, trying to discern the reason for his waking.

All the chatter on the radio had stopped. The Chinese had gone silent.

He hurried to the bridge.

The bridge was atop the seven-story “house” that contained all their quarters, their mess hall, and hospital. Once underway, it was where the twenty-two man crew spent the vast majority of their time, even though it occupied but a small portion of the ship’s massive volume. Almost all the other space was taken up by containers, the metal boxes designed to be lifted directly from the ship and placed onto either train cars or trucks. The ship was near its capacity of 1,164 TEUs, or Twenty-foot Equivalent Units, an unscientific measure of how many containers it could hold. For this leg of their journey they were carrying plastic pellets, Reebok shoes, tires, a variety of car parts from factories throughout Asia, and, he’d been proud to learn, five tons of food for the World Food Programme, destined for Cambodia.

He quietly stepped onto the bridge, where his third mate and a cadet were reliving their adventures in Singapore. They’d visited Orchard Towers, a legendary Singapore brothel that was a veritable shopping mall of the sex trade. It was known affectionately to sailors around the world as “four floors of whores.”

“Captain,” they both said, acknowledging him as he walked in.

“Reviewing my night orders?” he snapped.

“Captain…” stammered the third mate, surprised by the harshness of the Captain’s tone and his gaze.

“Bullshit on B Deck, after watch,” he said. “Right now I need you to mind my ship.”

“Yes sir,” they both said at once.

He stepped up to the radar screen, a plasma monitor with symbols for every ship in the tracking system. By scrolling the cursor over each, he could see their present course, speed, and the closest they would approach
Ever Able
. He noticed a cluster of ships in red near the coast of Taiwan, and scrolled over them.

“Are those the same warships we’ve been tracking?”

“Yes sir. They’ve pulled out of the restricted area…I wonder if the exercise is over.”

“Interesting,” said the captain. He hoped the Chinese were done with their games. It would explain the sudden radio silence as well. “But we’ll continue staying out of their way.”

He checked the ship’s speed: near its maximum of 18 knots. He walked over to a chart table where the second mate had drawn out their course. Their track would take them closer for a few more hours, then, finally, they would start to open distance to the Chinese fleet. A rectangle made of bright red tape marked the off-limits area. The resulting detour would add a full day to their voyage to Shanghai. It galled Captain Wright both as a shareholder of the Evergreen Marine Corporation, and as a man who believed in the freedom of the seas with religious fervor.

The rise of Chinese commerce had been the great change of Wright’s twenty-three year career at sea. Chinese ports were now the busiest in the world, and almost all his containers were either bound for China, or, in much greater numbers, contained the products of Chinese factories. But as China’s industrial power grew, so too had its military. Once barely a force on the world’s sea lanes, they were now flexing their muscle, and not just in Asian waters. They seemed unconcerned about the gentlemen’s agreements that the world’s merchant fleets had used to coexist with each other for centuries.

There were accents on the VHF radio that reassured him when he heard them, the voices he identified with traditional seafaring nations: Sweden, Ireland, Australia, and, of course, England. For much of his career, he’d known that his American voice on the airwaves had sometimes discomfited other seafarers: his accent marked him, to many, as potentially aggressive, arrogant, and even dangerous. There was a sense that the Americans had more power than they deserved or could safely wield. Now at the pinnacle of his career, when hearing those frenetic Chinese voices day and night, he understood that feeling. He walked to the far corner of the bridge, fiddled with the controls, verified again that the Chinese radio circuit had gone quiet.

“About time they shut up,” said the third mate, trying vainly to defuse the tension.

They listened to the static for a few minutes together, when suddenly a few words broke through, a rapid burst of chatter that got their attention. The captain turned up the volume as they went quiet again. Then, from a single speaker came short words spoken at a regular, even pace.

The Apocalypse Crusade 2 by Peter Meredith
DARK CRIMES a gripping detective thriller full of suspense by MICHAEL HAMBLING
Beowulf's Return (Tales of Beowulf) by Tim Hodkinson
Private Eye: A Tiger’s Eye Mystery by Alyssa Day
Talking to Dead (The Banshee Series Book 1) by Amaris Marx
Best Australian Short Stories by Douglas Stewart, Beatrice Davis
I Am an Emotional Creature: The Secret Life of Girls Around the World by Eve Ensler
Dark Desire: A Paranormal Romance Novella (The After Dark Series, Book #1) by Foote, Rebecca
Inception (The Marked Book 1) by Bianca Scardoni
Dreams of Us by St. James, Brooke
Our partner