Read Controlled in the Market Online

Controlled in the Market 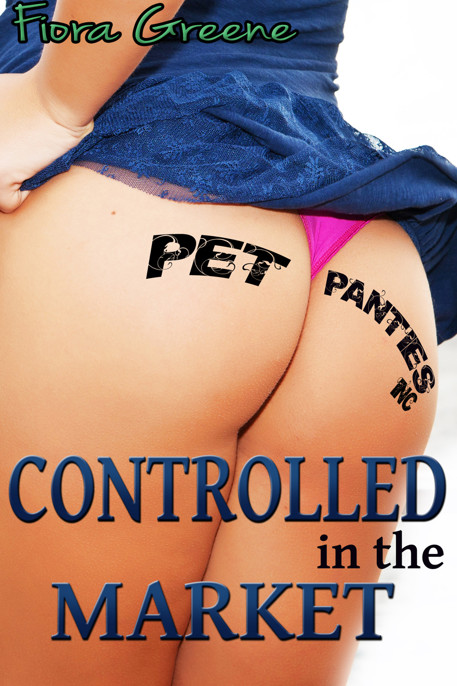 Controlled in the Market

This is a work of
fiction. Names, places, characters, or events are either the product
of the author’s imagination or used in a fictitious manner. Any
resemblance to persons, alive or dead, is completely coincidental.

The
wind that tickled Jenna's long dark strands was sweet, fresh, and
with a hint of the salt from the ocean. It was gentle, pulling her
hair along her neck until she finally reached up, slipping her mane
into a pony tail. It was a perfect day to be outside, and the young
woman was thrilled to have an excuse to wander about.

The
farmer's market was being held by the beach, and with a firm decision
that she needed groceries anyway, Jenna had slipped into a
comfortable dress and hurried down to the area. The stretch of ocean
was within walking distance of her place, of which she was quite
grateful.

Adjusting
the straps of the knee length blue outfit, she caught a glimpse of
herself in the flat metallic sheeting of one tent, admiring the sight
covertly. The garment hugged her hips and circled her small waist,
giving her a perfect hour glass shape while letting her remain
modest. She knew she looked good, and her life had been kind to her;
No stress lines marred her sweet, heart shaped face.

Jubilant,
Jenna almost found herself skipping along the ground, her hands
swinging gently at her sides. The pier was lined with a variety of
booths and displays, the majority being food. However, as with any
live market, there were other items as well. A table of porcelain
figures caught her eye, and another of knitted hats drew her away.
Over and over, she wandered about, pausing to admire the colors and
variety available to her shopping desires.

It
seemed impossible for anything to hold her attention long.

'I
wonder what I'll find in the market today?'

When
Jenna turned, leaving behind a tent full of ripe apples, a flicker of
lights caught her eye. Nearby, settled between a table of baked goods
and a display of sculptures, sat a brightly colored tent surrounded
in lamps. It made her think of Christmas, and the oddness of the
whole set up pulled her close like a moth to a flame.

It
was a large structure, heavy cloth and a flat table peeking from the
entrance. The whole thing seemed out of place, more festive than
anything she had seen yet. Unable to help herself, the girl stepped
close, brushing through the opening and into the buzzing center.

'Buzzing'
seemed too subtle a word.

Inside,
the walls and ceiling seemed to glow, lights of every shade blinking
about. There was an under current of sound, a song she couldn't
identify, but it seemed catchy and made her think she had heard it
before. The counter tops inside were shaped like an L, bedecked in
books, electronics, jewelery and clothing. The assortment was
immense, the place seeming to contain an entire bazaar separate from
the market outside.

The
brunette slipped closer to the display, her fingers grazing over a
radio, then a flute, before she spotted something flashy and pink. As
if pulled by intrigue, Jenna found herself standing in front of a
stack of clothing, her hands lifting and tugging at the outfits. The
designs were cute, though she didn't recognize the brand.

The
music was getting under her skin, she thought, the air seeming to
tingle and make her cells almost vibrate. The lamps in the tent also
seemed to be flickering, making her head throb, and spots of orange
danced in her eyes.

When
she yanked a shirt out of the stack, she knocked some of the
merchandise to the floor, and winced. Bending down, the young woman
collected the fallen cloth, pausing when her fingers brushed against
the surface of something so amazingly silky and smooth.

Standing
slowly, Jenna seemed to forget about the rest of the discarded
outfits, her hands holding the treasure she had discovered up before
her curiously. The panties were a dazzling, bubblegum pink; They
stretched at her touch, seemingly well made and with no loose
threads. What surprised her still, though, was how luxurious they
felt.

Once,
when she had visited Europe, she had stayed in an expensive hotel on
an accidental flight layover. The sheets in that place had been
decadent, fancy, and she had spent the night rolling in them like a
kitten in cat nip.

These
panties felt finer than even that bed had.

Baffled,
she searched for a label, finding a small set of letters printed
inside. The name made her blink, and she had to hold in a giggle.

It
almost seemed insulting, but at the same time, she didn't want to set
them down. The sensation was too perfect, and when she rubbed them
through her digits, she was reminded of buttery caramel.

She
almost had them to her cheek, to absently nuzzle, when the voice
came.

Jenna
gasped, surprised and embarrassed as she yanked the panties away from
her face. Spinning, she spotted an older man, his head tilted and his
mouth a polite, if strained, smile. “Um!” Flustered, her
words came out in a rush. “Sorry, I, uh. I saw your tent,
and...”

“
Ah,”
he stepped around the counter, standing on the opposite side of her
and looking pleased. “You came in because you wanted to buy
something.”

The
man made a motion, lifting an eyebrow in question as he pointed to
the item in her grip. “That, correct? You
want
to buy
those.”

The
girl opened her mouth, ready to deny this claim, to apologize and
leave in the awkward moment. Her words, instead, caught her off
guard.

She
was stunned, but even as she finished speaking, she clutched the
panties and realized it was true. They were amazing, she had to have
them, though it made her feel silly to want such a ridiculous item so
badly. The merchant only nodded, ducking down and lifting a small
paper bag into view. “They're very popular, you know. They're
also on sale, you'll want the full package.” He stopped,
lifting his eyes and giving her a serious look.

The
fellow stuffed a few more items into the container, talking to her
almost idly. “Of course you'll want the special deal, as well.
That's a few other items, and some shoes...” His words were
making her head foggy, and she wasn't sure how much time had passed,
but she found herself suddenly standing there with the bag in hand,
the merchant giving her a pointed stare.

“
You
asked where you could change, I said over there.” He pointed,
and she glanced to the side, spotting a small wardrobe shaped room
that stood on its own.

'What,
I asked about changing?' Her mind was a blur, and in a daze, she let
him guide her to the door. She felt too ashamed of her distracted
attention to argue, and wordlessly, the girl slipped into the tiny
box, shutting the entrance behind her.

In
the brightly lit space that was essentially closet sized, Jenna set
down her bag and rubbed her eyes. She didn't know what was wrong, but
something felt off. The music piping in made it hard to focus, and
the flickering lamps on the ceiling and around the floor length
mirror before her were making her dizzy.

Peering
into the bag, she found a number of garments, and she bit her lip,
wishing she remembered how much she had spent. She didn't even recall
handing over the money. Part of her debated on just taking the
container and exiting, fleeing the whole scene, but she felt oddly
compelled to try on the clothing.

Her
fingers dug through, shifting shirts, bras, and even a pair of
tights. Yet almost without question, she revealed to the air what she
was truly after; The panties seemed even pinker in the changing room.

Quickly,
she bent over, sandals kicked free and almost ripping her underwear
down her thighs and to the floor. The air was cool under her dress,
and she caught a glimpse of her own smooth flesh in the mirror.
Easily, excitedly, the girl tugged the satiny panties up her ankles,
gliding them along her hips until they slipped snugly into place. The
material was even more delicious on her sensitive parts, and it made
her groan softly in pleasure.

Turning,
she admired herself in the reflection, enjoying the way the garment
seemed to cup her ass perfectly. Grinning, she felt a thrill at the
sight, lifting her dress high and studying the fabric. It embraced
the junction of her thighs like a second skin, and she could see the
hint of her slit, almost highlighted by the vibrant pink.

A
knock on the door made her jump, and she dropped her dress hem in a
hurry.

“
Are
you alright in there?”

“
Oh,
uh, yes!” Scurrying, feeling frantic, as if she had been caught
doing something bad, Jenna grabbed the bag of clothes and stumbled
from the changing booth. The man stepped back, blinking at her, and
she wondered if he could tell how red her cheeks were. “Sorry,
uh, thanks for the clothes.”

“
They're
satisfying
, then?” His words seemed to imply more, but
she was too flustered to ponder it, and she simply gave a series of
nods, so rapid her hair bounced. Turning, her feet danced over the
cool ground, and the brunette dashed out of the tent with a strange
feeling of trepidation. She needed to leave, but she wasn't sure why
her intuition was telling her to do it as quick as possible.

She
wasn't sure if he waved, she was hurrying down the pier too quickly
to look back.

Her
nervousness calmed after a few minutes, but even so, she was far away
from the tent before she realized she was walking barefoot down the
lane. Gawking at her scattered thoughts, her unawareness, Jenna
looked from her toes, back the way she had come, and debated on
returning. The idea was amazingly humiliating, especially when the
realization that she had also left her original panties on the
changing room floor hit her.

Slapping
her forehead, feeling her own burning skin, the girl sighed loudly.
On a whim, she peeked into her bag, a tingle of memory in her brain.
She recalled in her daze a snippet of her shopping spree, thinking
she had also bought some new shoes at the man's shop. Jenna wasn't
completely relieved when this proved true, for the objects she lifted
from the sack were a mixture of pure sparkling seduction. The heels
were tall, sharp; The straps thin and blue. All together, they were
shoes better suited for clubbing, not a walk around a farmer's
market.

In
the end, Jenna shrugged in defeat. Bending over, her toes slipped
into the high fashion sandals, the wrappings going up her calf so
high she felt trapped in them. Her first steps were a bit wobbly, but
quicker than she expected, the girl was soon strutting down the
walkway easily.

Straight Talking by Jane Green
Possession of Souls by Weatherford, Lacey
Shifter's Claim (The Shadow Shifters) by A. C. Arthur
I Do! by Rachel Gibson
Lady Iona's Rebellion by Dorothy McFalls
The Boyfriend Experience by Skye, Alexis E.
The Rogue Element (Scott Priest Book 1) by John Hardy Bell
Kidnap Island by Raby, Philip
Endless by Amanda Gray
A Plunder of Souls (The Thieftaker Chronicles) by D. B. Jackson
Our partner