Read Cool With Her Online 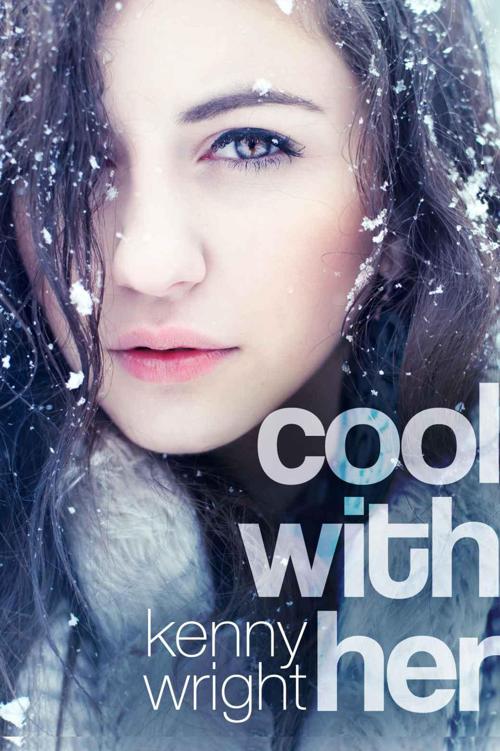 ALL RIGHTS RESERVED
Cool With Her © 2014 by KW Publishing

With the exception of quotes used in reviews, this book may not be reproduced or used in whole or in part by any means existing without explicit written permission of the copyright holder.

This book is a work of fiction and any resemblance to persons, living or dead, or places, events, or locales is purely coincidental. The characters are productions of the author’s imagination and used fictitiously.

Chapter 11: The Morning After 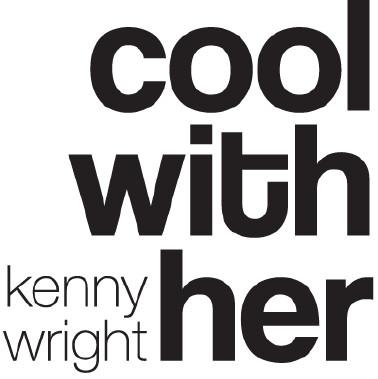 I blinked, glancing uneasily at Paul. We’d been friends since middle school, and while we were close, we weren’t
that
close.

This wasn’t exactly where I’d imagined my twenty-fifth birthday would lead: playing beer pong in the basement with my wife and three of our closest friends. It was
supposed
to be a huge party. A Quarter Century Party reminiscent of a high school coming-of-age movie. Instead, the forecast predicted snow and all but three bailed. Paul and Amber were two of the three.

Fortunately, getting drunk
was
part of the plan, and after more than two hours with the pony keg of microbrew, I considered it a rousing success.

“Alright, then,” Paul said. His jaw set. That was not a good look for me. Amber knew how to play his stubborn streak against him and he’d taken the bait. “If we win, then you two’ll treat us with the same. Fair?”

Paul stared across the table at Amber like this was high noon.

I glanced at Beth, who was studying Paul and Amber with amusement. When she looked at me and smiled, the image of Beth kissing Amber flashed through my mind. My pulse rose.

As always, my wife seemed to read my mind and was already rolling her eyes.

Keeping eye-contact, I grinned. “Seems fair to me.”

“It’s on,” the competitive Amber said, her attention never wavering from Paul.

Paul seized on the weakness. “See? Even your partner has doubts.”

Paul bowled on. “Amber, babe, you should listen to your friend and just give up.”

The women exchanged a look. My wife gave a subtle nod and Amber turned back to us. “You know what? I’m so confident that we’ll be watching you two gentlemen swap spit that I’ll let you go first.”

Again, my beer-soaked mind thought about our two tall, svelte partners in one another’s arms. I picked up my ping-pong ball and lobbed it across the table, completely missing all the cups. Paul shot me a disapproving look before dropping back into a crouch and launching the ball into the center cup.

“Luck,” Amber claimed, grabbing the cup and draining the beer it held.

Beer pong was simple enough. Ten cups, half filled with beer, were set up in a pyramid like bowling pins. Each team took turns trying to lob a ping pong ball into them, while the opposing team drank the cups that were sunk. Paul was good at it. I was terrible.

Especially with a distraction like Amber. When it became apparent that they were losing, she placed her hands on the table and leaned over my target. Her full breasts spilled out of the low-cut sweater.

“That’s not going to work,” Paul said. He licked his lips as his gaze lingered in her pale cleavage.

Unfortunately, it did. They evened up the score, 6-6. It wasn’t time to panic yet. There was still enough game left for me to enjoy Amber’s breasts and exchange funny looks with Beth.

Then the women pulled ahead and Paul called for a time out. “Are you into me or something?”

“Do you want to make out with me?”

He went on. “Because you’re playing like you do. You sank, what? One ball?”

“I don’t need that bullshit, Jace. I need you to step it up. Focus! Ignore Amber and focus, for fuck’s sake!”

Paul was right. If I didn’t start playing, I’d be kissing him. Amber and Beth were whispering conspiratorially to one another when I picked up my ping-pong ball. My wife giggled, looking over at me through her long lashes.

Amber didn’t step away from Beth once I took aim. Instead, the women sidled closer to one another, nuzzling as they watched me shoot. My jaw unhinged a little as Amber curled her fingers along Beth’s chin.

“You get your mind right?” Amber taunted.

“I did.” And with that, I sank my ball. Swish. After playing without focus, our opponents had finally given me some. If we won, I’d be seeing a whole lot more of this kind of teasing

We were tied at 8-8, two cups remaining in front of both of us. The pressure was on. Beth stepped up and knocked out one of our remaining cups. Amber missed hers. “Fuck!”

This was it. Probably our last chance to win. Paul stepped up to take the first shot. Everyone fell silent. The sexy opponents looked on, leaning on one another for support now, rather than seduction.

With his neat hair and week-old beard, Paul looked like he’d just stepped off the set of a Budweiser commercial, so this image was fitting: tiger stance, white ping pong ball in hand, red Solo cups half-filled with beer. He aimed, he shot, he sank it. It was a thing of beauty.

Dejected, Amber scooped up the cup and drank the beer it held.

My turn to put this away. My turn to give myself the best birthday present I’d ever imagined. And if I missed...

I looked at my fuming friend—more specifically, I looked at his mouth. At the scruff on his chin and on his upper lip.

I didn’t want to think about
if I missed
.

I planted my feet just as I’d watched Paul do with every shot. I lifted my elbow, lining it up with the cup. The room was still. My forearm moved like a dancing snake: back and forth, slow and steady. With a deep breath, I released the fluttering ping pong ball. It sailed.

Oh, how it sailed.

When I finally released my breath, the ball was floating in the golden drink, and Paul and I had won.

Stepping forward, Paul clapped his hand on my back. “Well done, birthday boy. Well
done.”
Amber blinked at the ball like it had betrayed her. Beth shook her head at my grin, which stretched from ear to ear.

Beth turned to Amber. “You’d think he’d made the game winning goal for the Stanley Cup.”

Amber still couldn’t believe she’d been beaten. She wasn’t a woman who liked losing—especially to her equally competitive boyfriend.

“Now,” Paul said, rubbing his hands together. “Pay up, ladies!”

Amber gritted her teeth, turned to Beth, and kissed her. Soft and swift. I wasn’t really expecting much, and watching Amber’s red lipstick and Beth’s lip gloss stick to one another would be a memory I’d hold onto forever, but Paul immediately protested.

“Now wait a minute. I believe the parameters of the bet were to kiss,
full on, tongue and everything
. That was neither full on, nor tongue, nor everything.”

Amber set her jaw, prepared to argue back.

“It’s what you agreed to,” I interjected.

Beth just shook her head slowly and mouthed
You dick
at me.

Amber looked from me to Paul, then back at me. “Fine, since it’s your birthday.”

Paul began to object. I stopped him with a hand on his chest as Amber stepped up to Beth and collected my wife’s head in her hands. This wasn’t the time to set the record straight. It was the time to watch.

Beth settled her hands on Amber’s slender hips, batted her eyelashes at me one last time, and turned back to her friend. The ladies drew close. Their lips parted. I caught the flash of pink before they came together. I watched the slow, open-mouthed kiss in disbelief. Every few seconds, one of them would shift and I’d catch a glimpse of their tongues swirling.

Beth’s fingers tightened on Amber’s hips, her fists clutching at the cashmere sweater. She retreated a little, pulling her head back, her jaw slack. Amber followed her, dipping close. Her fingers curled through Beth’s dark hair.

I was uncomfortably hard, and was pretty sure I wasn’t the only one aroused. The women seemed lost in their girl-on-girl kiss, going well beyond their end of the bargain.

I was so lost in the kiss that I didn’t hear the creak on the stairs and didn’t see the fifth member of our party join us.

Amber and Beth broke apart, their chests rising and falling rapidly. Beth let out a nervous laugh, which was shared by Amber.

“Seems like I’m missing out on a few things,” Casey said from the stairs. We all turned to Casey, who stood there with her eyebrows raised. “I didn’t realize you guys were
that
close.”

Beth spoke right over her. “It was a bet.”

I glanced at my long-time friend, wondering what she thought of this whole situation. With her hands in her customary gray hoodie and her nerd-girl glasses framing her sharp blue eyes, she looked almost the same as she had back in high school. And like all those times back then, I couldn’t read her at all.

“Beer pong’s a crazy game,” I said nervously. “You never know where it’ll take you.”

Amber was going for another drink. Beth just stood there with a silly smile on her face, chewing on her lower lip.

“I see that,” Casey said with a quick smile of her own. “So anyway, you guys should probably check out what’s happening outside. It’s kind of insane.”

Beth was the first to the top of the stairs.

“Holy shit. Guess the weather guys weren’t making up this stuff after all.”

What could barely be considered a flurry when we’d gone down into the basement was now a full on blizzard. The outdoor lights illuminated a sheet of fluttering white.

We all raced to our own window and peered out at the snow. I flipped on the rest of the exterior lights and looked out over the front yard. We had a long, tree-lined driveway that was normally lit up like an airport runway. With all the snow, I couldn’t even see the beginning of it.

Excited laughter and cheers filled the ground floor. I’d been so skeptical of anything more than a dusting—and so angry at my friends for not showing—that this was a complete surprise. Turned out, they had every right to be cautious.

“It was falling like that when I came up to make my phone call,” Casey said. “Must have been falling for hours while we were down there.”

“Crazy,” Paul said, wiping the condensation from the pane.

“You know what I’m thinking, right?” Beth asked me.

A look at her, and I knew immediately. The other three weren’t far behind. One moment, we had our faces pressed up against the frosted window panes, the next we were rushing for the closet and hauling on our winter coats.

It’s funny how much a person’s coat says about his or her personality. This lot was all over the place, from Paul’s lined black leather jacket to Amber’s off-white puffy down coat. Casey wore a black peacoat with the hood of her gray sweatshirt pulled up. Beth and I were the most appropriately dressed with our ski jackets and snow boots.