Craggy 2: Another Last Flight for Craggy 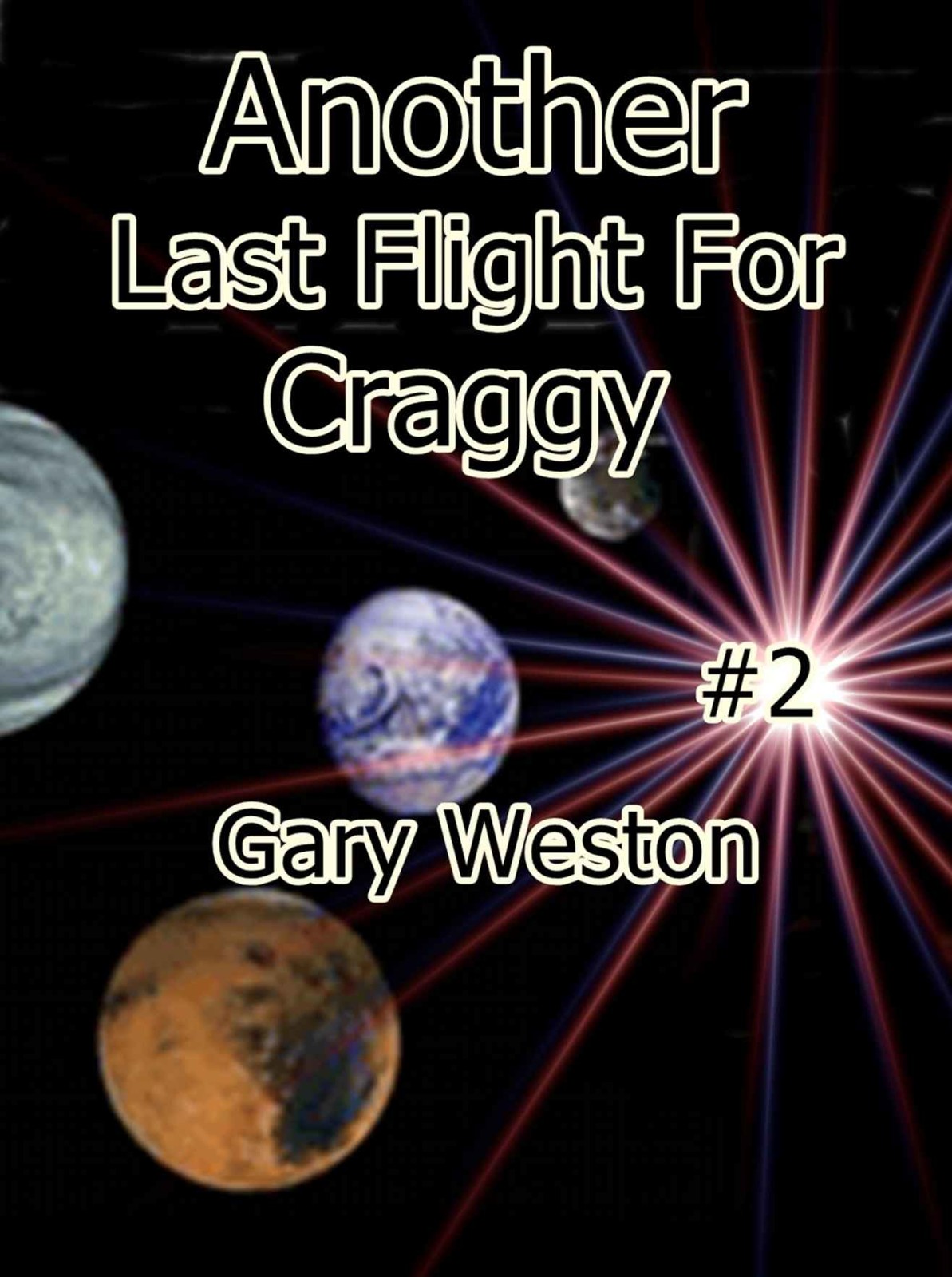 Another Last Flight For Craggy

ANOTHER LAST FLIGHT FOR CRAGGY

Another Last Flight For Craggy

T
his ebook is licensed for your personal enjoyment only. This ebook may not be re-sold or given away to other people. If you would like to share this book with another person, please purchase an additional copy for each recipient. If you're reading this book and did not purchase it, or it was not purchased for your use only, then please return to Smashwords.com and purchase your own copy. The ebook contained herein constitutes a copyrighted work and may not be reproduced, transmitted, down-loaded, or stored in or introduced into an information storage and retrieval system in any form or by any means, whether electronic or mechanical, now known or hereinafter invented, without the express written permission of the copyright owner, except in the case of brief quotation embodied in critical articles and reviews.  Thank you for respecting the hard work of this author.

This ebook is a work of fiction. The names, characters, places, and incidents are products of the writer's imagination or have been used fictitiously and are not to be construed as real. Any resemblance to persons, living or dead, actual events, locales or organizations is entirely coincidental.

Special thanks to Anna Scott Graham for head hitting.

F
reighter Pilot Training Commander Fawn Dillow didn't like what she saw. 'Only engineering could turn something beautiful into something this damned ugly.'

'Yeah. But you don't have to fly that damn thing.'

'I'm just glad she's your ship. Are you gonna sit here all day, or are you going to go over there and bring her home?'

'Hey. You can put those thoughts right out of your head right now, ok? Go land that bird.'

'See you on the ground.'

Dillow hurled herself out of The Eye's airlock and entered the Varlindran ship. She buckled herself into the chair on the flight-deck which was dark and freezing. The ship had been floating around in space for a year, and finally, it was time to get her on the surface of Mars.

A crude bank of overriding controls had been “added” to the top of the original existing control panels, and, according to engineering, would work the freighter thrusters stuck on the top of the ship. There were also rudimentary direction controls. She had been told, they should be enough to get her home. Words like should didn't excite her. Not when her life depended on it.

Starting the thrusters, the single plasma engine rumbled into life. Not in a good way.

There was only one thing to do. She did a Craggy. Dillow unbuckled her straps and stood directly beneath the troubled engine.

'Hey. I know, believe me. They abused you. But listen. Help me get us down, I swear I'll make you pretty again.' She placed her hands high up on a wall. She winced as she felt the unhappy ship. 'Please. Let me take us home so I can put you back together.'

The vibrations continued throughout the ship to express her opinion about the butchery done to her. Dillow couldn't even be sure that the whole thing wasn't about to blow up and take her with it.

The rumblings turned into a steady hum, and it seemed her life wasn't about to be extinguished. Yet.

'Thanks. Nice and easy, now, right? No sudden moves.'

Dillow sat back in the seat and buckled up again. Nobody knew more about flying freighters than she did, and with the modifications, essentially this was now a freighter.

'Taking her down, Breezy. Here we go.'

Down they went, gradually into Mars' atmosphere, where the unwieldy ship was still far from happy. Dillow's seat started to shake and the vibrations from the ship were so strong she could hardly work the control panel. The ground was coming at her too fast, and nothing was responding.

The ship took an erratic orbit, dangerously low, uncontrollably fast. The computer screen, literally held in place with ropes and tape, threatened to dislodge and come crashing down. It was her eyes and her only way of seeing outside the ship.

'Come on, sweetie. Just a few more minutes and we'll be ok.'

The single engine suddenly went silent. Power from it had completely gone. The screen was flickering, and all Dillow could see was the ground rushing up to meet her. She had seconds, her time slipping away. She was flying over new green vegetation, away from the populated areas.

Bracing herself, she held onto the arms of the seat until the blood drained from her knuckles. The ship plummeted, skimming the greenery. With heart pounding seconds to go until impact, the screen died and the belly of the ship hit the ground. Hard

A
ndrew Foreman, the old veterinarian who now ran Base Three with his son David, caring for the jungle and the creatures that lived in it, had previously told them what little he knew of Korlyn Num Sedindra and his kind. The Foreman's had had the most contact with the little alien when he was alive and visiting them on Earth through the pathways and tunnels.

Korlyn's people, as near as the translations revealed, were originally from a planet called Varlindra. Their world had died of gamma radiation from a dying sun and they planned to use their technology to take over Mars. Mars had been a vital, but undeveloped outpost for the Varlindrans. Korlyn hadn't said much more about his people, or the true significance of Mars to his race, preferring to withhold most of the information.

Now with the Varlindran ship finally on Mars, It was down to Wendy Breeze, Fawn Dillow, Stella Wayward and Skye Lewquarker, to repair the ship which had been damaged when Rocky Ramshorn had blasted the alien ship's thrusters with the laser cannon from Lance Dillow's ship, The Eye. Fortunately, only slight damage had been sustained when Fawn Dillow had landed the ship.

Breeze said, 'It was scary, but Fawn got the damn thing on the ground.'

'It was always a risky business tacking extra thrusters on it to get it here out of orbit,' Forbes said, 'And you think the damage to the thrusters is repairable?'

'Eventually. The Varlindran ship is way beyond our technology. The structure seems to be of an alloy as yet unidentified. We are still running tests. Any of
our
ships would have been total right off's if they had crashed like that one had. We haven't been able to see underneath yet, but looking at it from the inside, it seems relatively unscathed.'

Potts said, 'Good. I'm hoping we can learn a lot from that bird. Inside and out. We want you four to make it your number one priority and rope in anybody else you need, when you need them. We are all flat out, as usual, but I have a hunch that ship will give us a lot of useful stuff, once we've learned how to open up her secrets. Stella. Any progress with the ship's computers?'

'I'm in unknown territory,  Sir,' admitted  Stella Wayward. 'I'm studying the original computer cones and trying to learn from them about using the computer. The power isn't running right in the ship for some reason, and the computer isn't working like it should. It's also like learning another language.'

Forbes said, 'You're our best chance with that. I wouldn't have a clue. Fawn. How are you doing with the ship's schematics?'

Dillow said, 'I'm about one quarter along, Sir. It really is an incredible ship. The more I explore, the more I find. It just seems to go on and on.'

'At least,' said Potts, 'you can do your work in a reasonable amount of comfort. Just don't forget to put your helmets on at least once an hour for ten minutes.'

Stella asked, 'How long until we can work without suits altogether, Sir?'

Potts and Forbes shared a look.

'Ask ten scientists, get ten answers,' said Potts. 'The oxygen level is increasing, but as we all know, it can be patchy. The atmosphere is developing all the time. With the oxygen enriched atmosphere, comes the increase in temperature. At this time of year by the equator, we would have expected between five and fifteen degrees centigrade. We are already averaging seventeen point five. Predictions are for a sub-tropical climate around the equatorial regions within three years. The main thing is, we don't get too casual about it and forget to enrich our oxygen intake on a regular basis.'

Breezy, Stella, Dillow and Skye all smiled, having heard that a hundred times. It didn't hurt to be reminded. They were grateful they could work on the ship without their helmets, but they had to wear their suits for protection from the still cool temperature and so they could put their helmets on to get the oxygen into them in a hurry.

'Thanks,' said Breezy, getting up to leave. 'We'll keep you in the loop.'

The women left the office and went to the Base airlock. They still had to obey airlock regulations and ensure the outside atmosphere was separate from the Base Nine atmosphere. Base Nine was the dedicated administration centre. There were three hundred and seventeen people running it, and they all earned their pay.

Mars population was already approaching seven and a half thousand, not counting the five hundred and ninety six waiting to be born. Potts and Forbes monitored the situation closely, ensuring population and infrastructure didn't clash. Nearly half of Mars' population were either still in the womb, or crapping yellow all over the place. But the lush vegetation encroaching into the dry brown desert was carpeting the planet at a breathtaking pace.

It was almost hard for the gifted young women to ignore the idea of sitting outside without their helmets, and at the same time concentrate on the task in hand. They were too wrapped up in their work to allow that to happen. They stood on the lip of the ramp of the alien ship, and turned on their minds to use their phenomenal skills to explore the mysteries within.

Jule Reigh and the Jim Stone Affair by Lani Aames
Taken by Edward Bloor
All Heads Turn When the Hunt Goes By by John Farris
Once by McNeillie, Andrew
Saving Grace: Hot Down Under by Oakley, Beverley
The Viking by Talbott, Marti
St Piran's: The Fireman and Nurse Loveday by Kate Hardy
Single Witch's Survival Guide by Mindy Klasky
The Law of a Fast Gun by Robert Vaughan
Strong Mystery: Murder, Mystery and Magic Books 1-3 (Steampunk Magica) by Raven Bond
Our partner