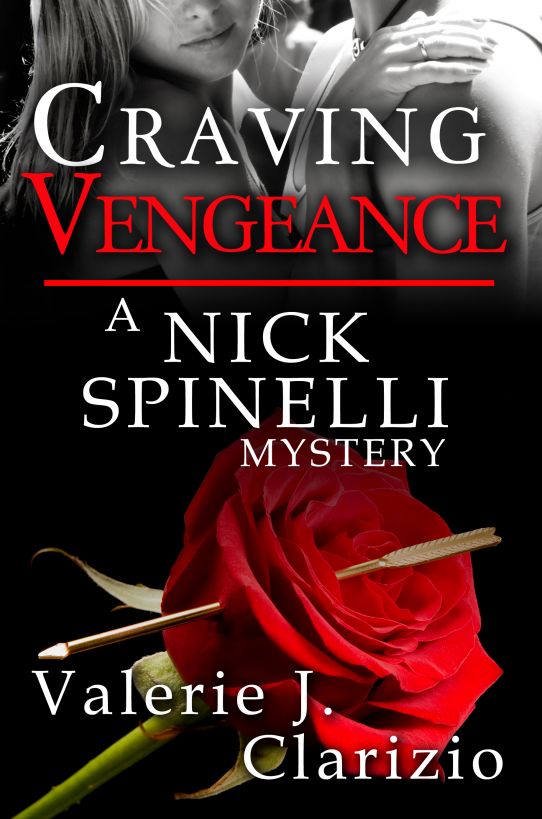 Nick Spinelli’s normal life as a homicide
detective has been catapulted into a whirlwind of chaotic holiday
adventures ever since he met the beautiful Shannon O’Hara.

Nick had hoped to spend his first Valentine’s
Day with Shannon in a traditional manner, starting with a nice
dinner out on the town and then perhaps a long warm adventurous
night in her arms. His plans quickly change when cupid is found
murdered in a back alley. The investigation becomes more and more
inconceivable, as Spinelli discovers that Shannon is linked to the
victim. When another cupid turns up dead, and it is discovered that
Shannon knows him as well, Spinelli is motivated to go undercover
as a singing valentine dressed as cupid, complete with wings and a
quiver of arrows. How many other cupids are at risk? Is Spinelli on
the killer’s list as well? The stress ignited by the day’s events
causes sparks to fly between Spinelli and Shannon as he struggles
to piece it all together and stop the string of slayings.

To my husband, Rick. Thanks for washing the
dishes and entertaining the cat so I could lock myself in the
computer room to write.

To my brothers. Thanks for the tidbits of
male perspective you provided to me whether I wanted them or
not.

A special thank you to my first critique
partner, Virginia McCullough, who taught me about the craft of
writing and red-lined my first manuscript more than I care to
admit.

Last but not least, thank you Darla Tong for
taking the time to read and re-read every manuscript I wrote until
I got it right.

Spinelli’s eyes popped
open. He stared into the face of an angel. Was he still sleeping?
How was it he had lured this beautiful creature into his life just
a little over two months ago? He resisted the urge to run his
fingers over her soft, milky white skin. She looked so peaceful
when she slept. He would never be bored watching her sleep. Her
slow even breaths mesmerized him. Was he dreaming? He almost went
so far as to pinch his arm.

Shannon stirred and flipped over. Her shiny
red hair spread out over her pillow like wildfire. He didn’t need
the nearby streetlight peaking through the window blinds to notice
her fiery hair, but it certainly helped to illuminate its zest.
Spinelli reached over and skimmed his hand over her soft hair.
Silky strands sifted through his fingers sending an electrical
current rippling throughout his body. He debated waking her, taking
her again. He nearly chuckled at the thought. When they’d first
met, they couldn’t stand to be with one another, now they couldn’t
stand to be apart. Cupid’s arrow struck him, hard and fast, out of
nowhere. He was done, toast.

His cell phone vibrated on the nightstand. He
reached over her to grab it before it woke her. Too late. Her
beautiful emerald eyes fluttered open. He stared into the sea of
green looking back at him, nearly forgetting about the call.

Her full ruby red lips stretched into a soft
smile. “Nick, your phone is vibrating.”

His ears focused on the sweet sound of his
name rolling off her tongue. No one ever called him by his first
name. Everyone called him Spinelli or Detective, even Shannon did
when they first met. But at some

point over the past couple of months, she had
started calling him by his first name. It nearly drove him insane
every time she said it. His heart raced. He should take her
again.

“Nick,” she whispered, knocking him out of
his reverie.

“Your phone is still humming.”

He grabbed his phone from the nightstand. The
time in the upper right-hand corner read 4:00 a.m. Captain
Jackson’s face flashed across the screen. He tapped the screen and
held the phone to his ear. “Spinelli here.”

“Rise and shine, Spinelli. We got one for
you, down on Water Street. Male, late 20’s, cause of death not
obvious. I’ve already texted you the address. The officers on the
scene are cordoning off the premises.”

Though he wasn’t a morning person, not even
close, a rush of adrenaline crashed through him like a tidal wave.
This is what he lived for, catching killers. He sprang out of bed
as Jackson’s words trailed off. “I’m on it,” Spinelli rasped before
he disconnected the call.

He retrieved his contact list and tapped
Detective Walker’s profile. Walker answered with a growl. Spinelli
gave him the details; then he did the same with Detective
Marsh.

Spinelli slid into a pair of jeans and pulled
a long sleeved navy polo shirt over his head. He grabbed his
Beretta 9mm from his nightstand and secured it in his holster
before he slung the chain connected to his gold detective badge
over his head.

He’d nearly leaped through the bedroom door
before he remembered Shannon still lay in his bed, entwined in his
comforter. He’d rather it be that she were intertwined with him. He
spun on his heel and in two long, quick steps was at her
bedside.

Her bright green gaze fixed on him. An amused
look covered her face. He knelt down beside the bed. “I gotta
go.”

“So I’ll pick you up at your place tonight at
7:00?” he asked, confirming their dinner date.

Spinelli arched a brow. “No?”

Shannon rubbed her eyes. “I mean yes to
dinner, but can we push it back to 8:00? I know that’s getting
late, but I’m scheduled to do the singing valentines for the church
fundraiser from 4:00 until 7:00.”

He leaned forward and brushed his lips
lightly across hers. He knew he had to keep it light or he wouldn’t
be able to leave.

She didn’t play fair. She reached up, wrapped
her arms around his neck, and pulled him to her. He let her, he was
weak. His mind was mush.

He responded to her demand for more and
deepened the kiss. His tongue passed through her lips. She tasted
sweet. How did she always taste so sweet? His heart pounded in his
chest.

Suddenly, Captain Jackson’s words from
moments ago echoed in his head.
We got one for you, down on
Water Street. Male, late 20’s, cause of death not obvious.
Christ, he’d nearly forgotten he had a dead body to attend to.

He pried his lips from Shannon’s, nearly
needing the help of a mechanic with a crowbar.

He rose to his feet, willing his knees to
support him. She always left him weak-kneed, and she probably
didn’t have a clue. “I’ll see you tonight. I have a special
Valentine’s evening planned for us.”

Shannon watched Nick walk out the door, sure
that if he were to turn and look at her one more time with those
dark charcoal eyes, she’d probably melt in an instant. He had the
most intense eyes.

She curled into a ball and pulled the thick
comforter up around her neck. His masculine scent coated the soft
material, stimulating her senses, as if his mouthwatering kiss
hadn’t already left her completely aroused. She wished he hadn’t
had to leave. Another round of lovemaking would have been ideal.
She’d had a taste of him, and now she couldn’t seem to get
enough.

She giggled at the thought of their rocky
start. When she’d first met him she thought he was the most
cold-hearted, egotistical human being she’d ever met. She’d never
been more wrong in her life. He turned out to be exactly the
opposite. Never in her life had she met anyone so caring, giving,
and loving. His rough exterior was just a front he used to shield
himself, as a result of his unfortunate upbringing. Growing up on
the streets with a drug-addicted mother certainly took its toll on
him.

A sense of pride crept through her as she
thought about all he’d accomplished; finishing high school on his
own after his mother died when he was only sixteen, then going on
to college, and becoming one of Milwaukee’s finest homicide
detectives. It took a strong person to accomplish such. She admired
his strength and determination.

Spinelli pulled up to
the crime scene to find Walker and Marsh already milling around.
Several uniformed officers and a few plain-clothes individuals
lingered about the area as well. Spinelli edged between his
partners to take a look. “You gotta be shitting me. Is that
Cupid?”

Walker nodded. “What gave it away? The nude
man with wings, the bow, or the quiver full of arrows?” Walker
asked.

“Very funny. What do we know? Has he been
identified?”

Marsh smirked. “Hmm, I don’t know about you,
but I can tell you one thing for sure, I’m not searching him for a
wallet.”

Spinelli rolled his eyes and stuffed his cold
hands into his pockets. “Are you two assholes about done now? Can
we get down to business?” His breath fogged in front of him.

Walker cleared his throat. “A beat cop found
him here, just over an hour ago, about 3:45 a.m. The cause of death
isn’t blatantly obvious. We’ll have to wait for the pathologist’s
report. But judging from the vic’s bluish-gray color I’d guess he’s
been here a couple of hours.”

Spinelli glanced at the vic’s body, as it lay
lifeless over a small snow bank pushed up against a brick building.
Ice crystals sparkled over his murky colored skin. The air
temperature hovered around twenty-six degrees. With the wind chill
factor, it was probably in the teens.

“Maybe the poor bastard was so drunk when he
left one of the local bars that he passed out and froze to death,”
a nearby beat cop offered as he stepped closer to them.

Spinelli eyed the young cop for a moment.
“Then what happened to his clothes? I’m guessing if he was in a
bar, he would have been wearing clothes, right?”

“Well, maybe he was mugged, and they took his
clothes and wallet,” the beat cop stammered.

“So you’re saying some thug happened by a guy
passed out in a snow bank and instead of just taking his wallet, he
stole his clothes, too? And then he intentionally left the wings,
bow, and quiver full of arrows behind,” Spinelli stated as he
shifted his gaze to Marsh. “I suppose that makes sense. What do you
think, Marsh?” Spinelli asked.

“
I think I would have taken the wings.
Chicks dig a guy with wings,” Marsh replied.

“Dicks,” the young officer mumbled before he
disappeared into the crowd forming around the perimeter.

Though Cupid’s body had been carted off,
Spinelli, Walker, and Marsh lingered at the scene for a while
longer, combing the area for evidence. Nothing specific presented
itself.

The detectives returned to the precinct. It
was nearly 7:00 a.m. Marsh made coffee as Spinelli hung pictures of
the unidentified cupid on the crime board. He looked at Walker,
“Not a good way to start Valentine’s Day, having to tell everyone
Cupid’s been murdered.”