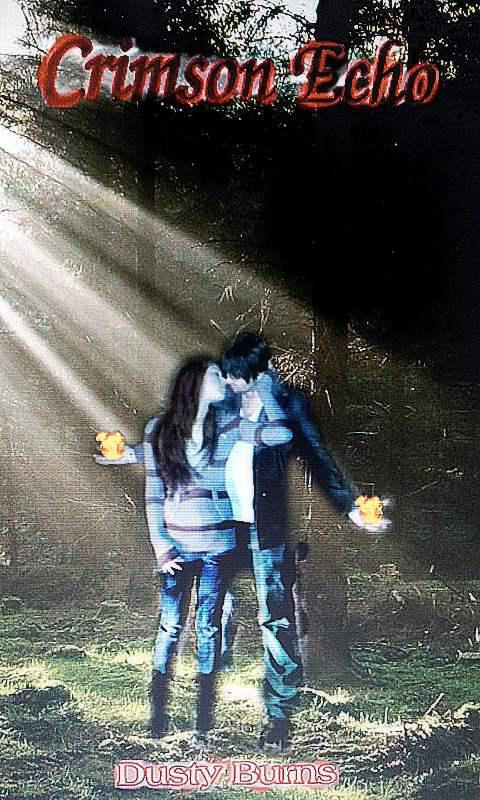 “There is no fear in love;

but perfect love casteth out fear…”

I expected more finality to it— my death. I waited for a slew of images; my life flashing before my eyes, glimpses of my most cherished memories: my childhood, my friends, my family. I closed my eyes waiting for the climatic rush of fear and sadness to envelop me like a straight jacket.

Nothing…
I felt nothing.

My near brushes with death had taken a toll on my emotional well-being. I should feel some semblance of urgency regarding my impending doom—
a wave of emotion is what I longed for now, to feel the good and the bad, to give me some sort of peace as I spiraled at an alarming rate towards the forest floor. Maybe my brain was still on that ledge and it hadn’t had time to catch up with my body yet.

Just the constant thudding of my heartbeat, gravity pulling me downwards, the open air swishing through my ears and crawling between my fingers.

Kane was right, the cool air was soothing.

Kane, I remembered him with his back to me— still climbing, oblivious to my fatal attraction to all things deadly. I forced my eyes open yearning for one last look at him. He turned to me as if I had called out his name. Fear erased the smile on his perfect, beautiful face. Then he jumped…

My eyes fluttered open with irritation as a constant beeping sound invaded my ears. I looked around the room for the incessant noise, ready to smash it with the nearest object when I realized I couldn’t move. My hands and feet were tied down to the bed by a thick white strap. The beeping increased. The pale blue nightgown scratched my skin and the sheets smelled strongly of bleach. Taped to my left arm was a needle that fed some sort of liquid into my veins. I hate needles and even worse, I hate hospitals. Still, the beeping increased.

As I started to panic I spotted the nurse’s call button near my right hand and struggled against the restraints. As I tried to reach for the little red button at my side a short nurse in pink scrubs shuffled into the room with her face buried in her clipboard and she hummed to herself. I tried to speak but my voice was hoarse and my throat dry.

“Help me.” I whispered and swallowed hard. “Please help me.”

The nurse looked up from her chart and gasped.

“How did I get here?” I choked around the lump in my throat.

“You don’t remember?” The nurse asked with more composure now.

“I… I should call your parents.”  She poured water into a plastic cup and held it to my lips as I took a sip.

“Why am I tied down?” My voice cracked as I stared down at the restraints.

“We had to restrain you because of the severity of your burns.” She forced a smile. “You kept scratching.”

“Oh?” I whispered and looked down at my heavily bandaged arms.

“This should help with the pain.” She said as she injected a syringe full of clear liquid in to my I.V.

“No, that’s okay. I don’t need it!” I quickly yelled, but it was too late. I was already feeling the effects of the clear liquid.

“Sleep tight.” She smiled and walked away.

The last thing I remember was the nurse with her bright pink scrubs shuffling out the door and the beeping of the monitors at my side. My head became woozy and I tried to force my eyes from crossing, but the clear liquid overpowered me and soon I was fast asleep.

“Tristan,” a voice called out from somewhere close by. “Tristan, honey, wake up. It’s time for school.”

I awoke with a gasp and looked around the room as I tried to get my bearings.

“Tristan, are you okay? You’re all covered in sweat.” My mom shot me a worried glance as she picked up a pile of dirty clothes off of the floor and shoved them into my dirty clothes hamper.

Pieces of fragmented memories flooded my mind as my mom watched me with scrutinizing glances. Flashes of the day I left the hospital came first, then half conscious meals at
the dinner table and lastly the long drawn out conversations where I reassured everyone that I was fine.

“Are you having those dreams again? It wasn’t the same one about that fire, was it? Do you need another visit with Dr. Johnson?” She frowned.

They say trauma is a natural response to a terrible event like an accident or natural disaster. Shock and denial are considered typical after such an experience. I’ve heard that long term reactions include unpredictable emotions, flashbacks, strained relationships and even physical symptoms. But I won’t let that happen to me.

“No mom, I’m fine. I’m just a little edgy this morning.” I lied. Lying was something I was getting exceptionally good at these days, not that I like lying. It’s not a sport or anything. Lying was a necessity now. You can call it bending the truth if it makes you feel better, but either way it had to be done. I had been telling these little white lies so often lately that I began to believe them myself.

“I got it mom!” I yelled. It wasn’t that I was mad. I was just tired of being babied, and being exiled to house arrest for the last week wasn’t helping the situation any either.

“Breakfast will be ready in ten minutes, so you better get moving kiddo.” She tapped her watch and shut the door behind her.

It had only been two weeks since the mishap at Echo High, but it seemed more like yesterday to me. I replayed the incident over and over in my head, at least what I could remember of it. There were all these gaps of time that were missing. It turns out a concussion can come with major memory loss and to top it off I was the focus of the whole town lately.

The local television stations and newspaper reporters had finally moved off of our front lawn when my parents refused to let them interview me. A bigger and better story eventually came along and everyone forgot about me, but my life still went on when the cameras were turned off.

I’m sure if they were still around today I would have made headlines again, I can see it now:
Toxic gas and fire survivor starts first day at new school
. I was glad that they weren’t there to see it. I guess living in a small town makes anything out of the ordinary newsworthy.

I live in Echo Oregon, population six hundred and fifty—it’s
a blink and you miss it
kind of town. There’s not much to do here. Actually there’s nothing to do here. If you want to do something fun you have to make the long trip up to Portland, which I try to do as often as possible. Occasionally someone will throw a party to liven up the monotony of everyday life here, but those are few and far between. Sure we have our tourist attractions, but that’s old news to the locals.

“I’m coming! Give me a minute!” I yelled back as I brushed my teeth and combed my hair simultaneously. Multitasking was something else I had gotten quite good at lately.

I rinsed and spat the mouthwash in the sink and watched as it circled the drain and then disappeared in a flash. I hurried down the stairs and hoisted myself up onto a barstool and tossed a plate full of scrambled eggs down my hatch. As I soaked my toast in butter I could see my mom out of the corner of my eye watching my every move as she pretended to wash a frying pan.

“Are you nervous about your first day at Emporia?” She asked.

“Kind of, it feels like the first day of school all over again.”

“I would imagine it would be pretty scary. The sheer thought of transferring would’ve had me in a panic.” She admitted. My mother was always a timid woman, so this didn’t surprise me a bit.

“I won’t be alone, I’ll have Faith and Chelsea and Everett. The whole student body is being transferred, I'm sure it will be exactly the same.” I rebutted.

“You’re probably right. If you start to feel…” She carefully searched for the right word. “…sick, you just call me and I’ll be there as quick as I can, okay?”

“I’ll be fine mom, I’m a big girl.” I rolled my eyes, but secretly I was nervous.

The truth is I was scared to death. What if everyone looked at me strangely? What if they treated me like a leper? Would they ask about the fire or would they pretend it never happened? I hoped they wouldn’t want a detailed description of what occurred, because honestly I didn’t remember much of that day at all.

“Just remember, I’m only a phone call away.” Mom tried to reassure me.

I forced another smile for her benefit, though I don’t think it helped any. “I’ve got to go or I’ll be late. I’ll see you and dad tonight.” I grabbed my bag and snatched my keys off of the desk by the door and headed out into the rain.

Emporia wouldn’t be hard to find, I had passed it a thousand times on the way to Portland, never giving it a second thought. Mom worried about me making it there on my own, I’m not great with directions. Dad says I could get lost just going around the block. I wouldn’t have even known how to get to Emporia High if it hadn’t been for my best friend Faith who talked me into going there last Halloween. Supposedly it was haunted and every year the ghosts of the town’s people gathered on the premises. The story was pretty sketchy.

“Hundreds of years ago before Emporia was built, on the land was a graveyard and every Halloween the ghosts come back to look for their bodies. We have to go communicate with them!” I remembered Faith saying. But like I said, I don’t believe in ghosts so I wasn’t sold on the idea and she ended up chickening out anyway.