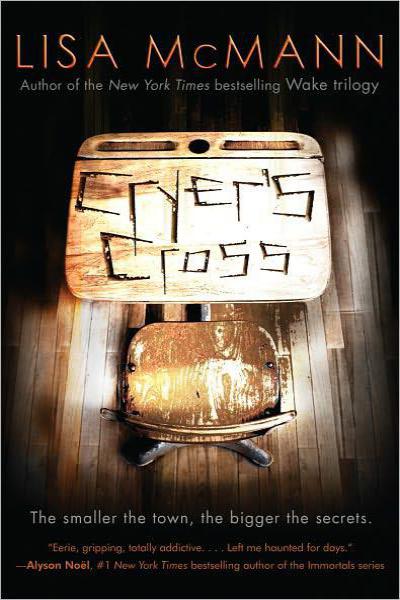 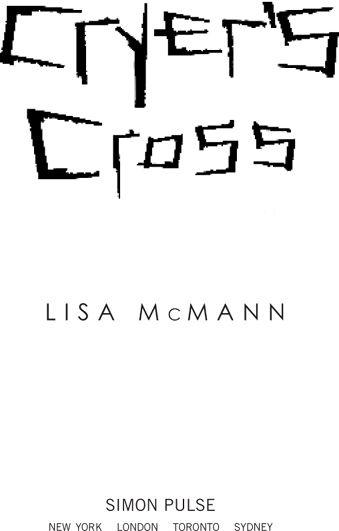 This book is a work of fiction. Any references to historical events, real people, or real locales are used fictitiously. Other names, characters, places, and incidents are the product of the author’s imagination, and any resemblance to actual events or locales or persons, living or dead, is entirely coincidental.

SIMON PULSE
An imprint of Simon & Schuster Children’s Publishing Division
1230 Avenue of the Americas, New York, NY 10020
www.SimonandSchuster.com
First Simon Pulse hardcover edition February 2011
Copyright © 2011 by Lisa McMann
All rights reserved, including the right of reproduction
in whole or in part in any form.
SIMON PULSE and colophon are registered trademarks of Simon & Schuster, Inc.
The Simon & Schuster Speakers Bureau can bring authors to your live event.
For more information or to book an event contact the Simon & Schuster Speakers Bureau at 1-866-248-3049 or visit our website at
www.simonspeakers.com
.
Designed by Mike Rosamilia
The text of this book was set in Janson Text.
Manufactured in the United States of America
2 4 6 8 10 9 7 5 3 1
Library of Congress Cataloging-in-Publication Data
McMann, Lisa.
Cryer’s Cross / by Lisa McMann. — 1st Simon Pulse hardcover ed.
p. cm.
Summary: Seventeen-year-old Kendall, who suffers from obsessive-compulsive disorder, lives with her parents on a potato farm in a tiny community in Montana, where two teenagers go missing within months of each other, with no explanation.
ISBN 978-1-4169-9481-7 (hardcover)
ISBN 978-1-4169-9483-1 (eBook)
[1. Obsessive-compulsive disorder—Fiction. 2. Supernatural—Fiction.
3. Missing children—Fiction. 4. Interpersonal relations—Fiction. 5.
Montana—Fiction. 6. Mystery and detective stories.] I. Title.
PZ7.M2256Cr 2011 [Fic]—dc22 2010015410

To my daughter, Kennedy, for all the incredibly tough challenges she’s endured with her OCD, and for letting me share some of it in hopes that others might understand or find some comfort. I’m really proud of you, kiddo.

To my son, Kilian, for being one of my first readers, and for his discerning artist’s eye. Also for being the front.

To my amazing husband, Matt, my biggest supporter, who constantly picks up the slack without complaint when I’m traveling or on deadline, and who reads everything I write, even when it’s rough, and helps me make it better.

To the White House Boys for telling their story and inspiring part of this one.

To Kendall Kovalik, for whom the main character is named, and her lovely mom who donated so generously to Project Book Babe to make it happen.

To Dave Gritter and Lindy Flanigan for your help with all the soccer stuff.

To June and Karl DeJonge for knowing so much about potato farms in Montana.

To Deke Snow for carrying my luggage to my room in Rochester and for being generally awesome in all ways.

To my agent, Michael Bourret, for the encouragement, the thoughtfulness, the never-ending hard work, and the laughs. You are one amazing person. I am so grateful for everything you have done for me.

To my editor, Jennifer Klonsky, who jumped on my extremely primitive idea for this book before I even knew it was an idea, and to the entire team at Simon Pulse for all you do for me and for my books. You guys are incredible and I love you and appreciate you so much.

To all the AYT actors I’ve met over the years—you have been such awesome readers and spreaders of the book love. Thanks for telling your friends! And always remember that I am your biggest fan.

When it is over, We breathe and ache like old oak, like peeling birch. One of Our lost souls set free. We move, a chess piece in the dark room, cast-iron legs a centimeter at a time, crying out in silent carved graffiti. Calling to Our next victim, Our next savior. We carve on Our face:

Touch me.
Save my soul
.

Everything changes when Tiffany Quinn disappears.

Of the 212 residents of Cryer’s Cross, Montana, 178 join Sheriff Greenwood in a search that lasts several days from sunup to after dark. School is closed, all the students taking part, searching roads and farms, trudging through pastures of cattle and horses, through sections of newly planted potatoes, barley, wheat. Up to the foothills and back along the woods. They travel in groups of two or three, some nervous, some crying, some resolute. Shouting to the other groups now and then so nobody else goes missing—cell phones aren’t much good out here. Cryer’s Cross is a dead spot.

After five days there is still no trace of Tiffany Quinn.
She is gone, impossibly. Impossibly, because to imagine that there has been foul play here in the humble town of Cryer’s Cross is laughable, and to imagine that sweet ninth-grade bookworm running away, going off on her own . . . It’s all so impossible.

But gone she is.

Kendall Fletcher flinches and casts regular glances behind her out of habit. Scared about the younger girl’s disappearance, true, but also unsettled by this shake-up in her schedule. The final week of her junior year canceled—everything left unfinished, open ended. Her whole routine is off.

She walks the hundreds of acres of her parents’ farm and beyond into the woods, wearily counting her steps through the potatoes and grain fields and trees. Counting, always counting something.

Her best friend, Nico Cruz, walks next to her.

But boyfriend means commitment, and commitments that she can’t keep tend to make Kendall feel prickly. “Come on,” she says. “Let’s run.”

She takes off through the field, and Nico follows. They pass an imaginary soccer ball between the rows, occasionally yelling out “Tiffany!” Once, after they cross
over to Nico’s family’s land, they see a big brown lump where the barley field meets the gravel road, but it’s not Tiffany. Just a road-killed deer.

She’s not here. She’s not anywhere.

They take a break under a tree at the edge of the farm as rain starts to fall. Kendall stares and counts the drops as they hit the gray dirt, faster and faster.

Nico talks, but Kendall isn’t listening. She needs to get to a hundred drops before she can allow herself to stop.

Eventually the search ends. Nothing more can be done locally except by professionals now. It’s prime planting season. Farmers have chores, and students do too. Plus jobs, if they work in town or for one of the farmers or ranchers. Life has to go on.

It’s a long, hot summer full of hard work for Kendall. For everyone. After a month or two, people stop talking about Tiffany Quinn.

In September when school starts again, Kendall arrives as she always does, the first one to the one-room high school, except for old Mr. Greenwood, the part-time janitor, who retreats to his basement hideout whenever students are around.

Kendall is tan and not quite freakishly tall. Athletic. Her long brown hair has natural highlights from her driving a tractor and working on the farm all summer.

Kendall imagines every possible scenario for Tiffany. Running away. Getting lost. Being abducted. Maybe even raped, murdered. Wondering which one really happened, and if they’ll ever know the truth. She pictures all of it happening to herself, and it almost makes her cry. Pictures Tiffany screaming for help, begging to live . . . Kendall’s eyes blur as she remembers her summer, turning the tractor through the fields and obsessing about such horrible things. It seemed so real, so scary, as if someone were about to jump out of the woods and attack her.

She knows some of her thoughts are irrational. She knows it and always has known it, even in fifth grade, when she used to layer on clothes—four shirts, three pairs of underwear, shorts under her jeans—anxiously, frantically, crying her eyes out for fear people could see her naked through her clothes. What an awful time that was. Fear like that is constant, tiring. But the psychologist over in Bozeman helped. Explained OCD—obsessive-compulsive disorder—and eventually that particular phase of worry went away, only to be replaced by other obsessions, other compulsions.

She’s not crazy. She just can’t stop thinking things when weird ideas get lodged in her head. She also can’t stop glancing behind her—it has become her latest compulsion. This whole thing with Tiffany has set her back some.

So she’s glad to be back at school, though feeling a little desperate because of how last year ended. And anxious to
start this year fresh. Anxious to have new thoughts, new assignments bombard her brain, keep her mind occupied with non-scary things. Soccer practice starting up again. New DVD dance routines to learn. New things to keep her busy, body and mind. It’s a relief.

Lord of the Black Isle by Elaine Coffman
Wild Splendor by Cassie Edwards
The Cat That Went to Homecoming by Julie Otzelberger
Sharpe's Havoc by Cornwell, Bernard
I Am Having So Much Fun Without You by Courtney Maum
The As It Happens Files by Mary Lou Finlay
April Raintree by Beatrice Mosionier
Because of Rebecca by Tyler, Leanne
A Lasting Impression by Tamera Alexander
Steamed 4 (Steamed #4) by Nella Tyler
Our partner