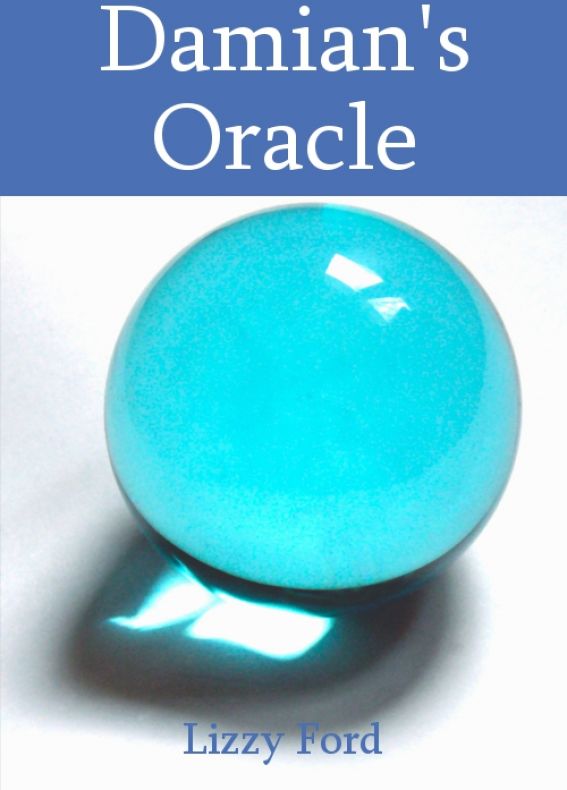 Smashwords edition license notes:
Thank you for downloading this free ebook.
You are welcome to share it with your friends. This book may be
reproduced, copied and distributed for non-commercial purposes,
provided the book remains in its complete original form. If you
enjoyed this book, please return to Smashwords.com to discover
other works by this author. Thank you for your support.

See other titles by Lizzy
Ford at
http://www.guerrillawordfare.com/

This book contains explicit language that may
be inappropriate for children under the age of 18.

“So … did the doc say you’re turning into a
vampire?”

Sofia dropped her purse on the desk in her
cube without removing her sunglasses. The early December sun
couldn’t set fast enough to prevent her pounding headache from
growing worse on her drive to work. She ignored the hunk in her
cube, hoping he’d take the hint.

“Vampiress,” Jake pressed. “I brought you
something.”

He held out a bottle of red water.

“You can pretend it’s blood.”

“You have five minutes to leave my cube, or
I’ll bite
your
neck!” she retorted.

“Really, what’d the doc say?” Jake grew
serious and sat in the spare chair in her cube.

Sofia rubbed her temples. She was better off
pulling a random diagnosis out of a hat.

“No brain tumors,” she replied. “Probably not
the neurological issue they thought. They’re looking at other
ideas.”

“Do they know what makes you allergic to
light and eat raw steaks covered in peanut butter for every
meal?”

“They’re not raw, and I only eat them for
dinner.”

“Did the doc explain your mood swings,
too?”

She gritted her teeth. She’d known Jake since
her junior year of college. They dated in college, parted ways
mutually, and ended up working for the same financial planning firm
in Virginia. Normally, she felt privileged that he still gave her
the time of day, what with the way he’d turned out – formed like a
Greek god with hazel eyes so pretty their boss swooned every time
she spoke to him. But today, she didn’t want to be reminded that
she’d changed from a normal human being into a sunlight intolerant,
moody bitch in the two months since her 28
th
birthday.

“Think you can talk the boss into letting me
come in an hour or two later?” she asked.

“Yeah, easy. I just smile pretty. Doesn’t
work on you, but it does on her.”

“Thanks, Jake. The headaches are getting
worse.”

“The doctors don’t know,” she said with a
sigh. “They’re flying in a specialist from overseas. They said it
might be some sort of rare blood disorder.”

“What the hell does that mean? That they
really don’t have a clue?”

“
I
googled your symptoms,” Jake said
and unfolded a piece of paper. “A lot of bullshit posted by wannabe
vampires and Twilight fans. But I found this, too.”

He handed her the page.

“This is fruit punch, by the way,” he said,
nudging the bottle of red water towards her. “Your favorite,
right?”

“I don’t remember telling you that.”

“Anyway, among the wacko postings, I found
this site.”

He held up the paper to reveal a link to a
website with a single name and phone number written on it.

“What is this?” she asked, accepting the
paper.

Jake wiped his mouth the way he did when he
admitted to cheating on her eight years ago. She lifted her
sunglasses to squint at him.

“It’s a blog this doctor guy keeps. In it, he
describes what you’re going through.”

“How did you find it? I spent days surfing
the net. Even Katy tried to help.”

“Aw well, you and your BFF just aren’t as
good as The Jake. She’s still a bitch, by the way.”

She rolled her eyes. He’d never gotten over
her BFF refusing to date him after she dumped him. Jake’s ego was
as large as his size sixteen feet.

“What does he say my symptoms are?”

“I don’t know. His blog is firewalled from
here, though, so you should just call him.”

Damian Bylun.
It struck a cord deep
within her, as if she should know it. Struck by something else, she
removed her sunglasses and eyed Jake.

“You know you haven’t spoken to me more than
to say hello in five years. I haven’t been able to get you out of
my cube for the past two weeks. What’s up with that, Jake?”

He chuckled and rubbed his mouth again.

“I’ve been doing a lot of soul searching and
am just trying to … be a better person.”

She could almost see him standing before his
mirror practicing the line before going to the bars to pick up
chics. But, whatever he was hiding couldn’t be that important.

“I’ll look at this later,” she said. “Go
forth and leave me be, The Jake. Leave the punch.”

“Sofia, I really think you should call this
guy,” he said, looking her in the eye. “Please.”

A sense of uneasiness ran through her at the
gravity in his normally light tone.

He flashed a smile and strode from her cube.
Sofia looked at the paper again. She retrieved her cell and tucked
the paper into her pocket. Snatching her sunglasses, she almost
made it to the door before she heard Lacy’s voice.

She grimaced and turned to see the tall blond
retreating towards her office. Lacy wore a skirt too short and
tight for office wear, but when you’re the boss …

“I noticed you’ve been taking a lot of sick
time lately,” Lacy said as she entered.

“Jake told me. HR passed it to upper
management. I need you to bring in some sort of paperwork from your
doctor stating what’s wrong.”

“They don’t know what’s wrong. I can bring
you another one of the notes verifying that’s where I am when I’m
missing work.”

Lacy looked up from the memo in her
hands.

“What do you mean? They’re doctors. Of course
they know what’s wrong. And those notes aren’t good enough.”

“I can’t make reasonable accommodations for
you if I don’t know what’s wrong.”

“That makes no sense, Lacy. If I have a
doctor’s note saying I’m under their care, isn’t that good enough
until they figure it out?”

Sofia bit her tongue. She lacked Jake’s
golden tongue, and her bluntness had gotten her in trouble more
than once. Normally she acquiesced in favor of a paycheck, but
Lacy’s demand was bizarre, even by Lacy-standards.

“Look, Lacy, I’m not trying to be difficult.
I’m so frustrated right now. I just came back from a battery of
tests that said nothing’s wrong with me.”

The moments the words left her mouth, she
knew her mistake. Lacy’s eyebrows shot up.

“What do you mean there’s nothing wrong? Are
you making this up?”

“So you’re a basket case. One of those
aphrodisiacs or something.”

“I meant, you’re making it up!” Lacy snarled.
“Aphro, hypo, who gives a damn. They’re the same thing! You’ve been
lying to me!”

“Lacy, stop!” Sofia snapped, standing. “I
haven’t lied to you. They don’t know what’s wrong, and I’m not
making it up!”

“You’ve always thought yourself
soooo
much better than the rest of us, and I’m sick of your attitude. Now
you’re lying to me about being sick. You know what? Until you can
prove you’ve got some damn disease, you’re on leave without
pay.”

Stunned, Sofia stared at her.

“Shut up and get the fuck out!”

Surprise, then fury lit her insides.

Lacy’s mouth dropped open. Dimly, Sofia knew
she’d never work there again after that low blow. She snatched her
bag and hurried home, not reflecting on her behavior until she
tossed her coat on the bed.

Her cell rang. She dug it out of her
pocket.

“He’s still a dick. You’re not seeing him
again, are you?”

“Katy, I have a headache. I’ll call you
later.”

Sofia hung up, frustrated. She emptied her
pockets and tossed her lunch in the fridge. When she retreated to
the bathroom, she flipped on the light, cringed, but forced herself
to stare at her reflection in the mirror over the sink.

She was going to die. She just knew it.
Whatever her disease, it had eluded the doctors for months. By the
time they found out what it was, she’d probably be near-dead, like
stage four cancer. She stared at her reflection, caught by
something else that didn’t seem right. She leaned forward, staring
at her irises. Her eyes had always been a pretty shade of
turquoise, her favorite feature. But instead of a rim of darker
blue surrounding her irises, they were rimmed by a thick band of
iridescent silver.

As she stared, the silver seemed to flare
into a deep glow and swirl around her irises like cars around a
racetrack. She closed her eyes and opened them again. The silver
was still again.

She ran to her desk and pulled out a journal,
jotting down her latest symptom.

The strange symptoms went on for three pages.
She read the list until panic stirred in her breast. Claustrophobic
in the dark cave that had become her home, she grabbed her coat and
purse and set out into the cold, brisk night. She didn’t want to
die, and she didn’t want to spend the rest of her life without ever
seeing the sun again like Brad Pitt in
Interview with a
Vampire
.

She joined crowds of people milling through
downtown Crystal City to see the Christmas displays and shop. The
sight of such normalcy calmed her, until someone brushed against
her.

A man’s face, a woman in the hospital on
her death bed, their children surrounding them
.

“I’m so sorry!” someone said, steadying her
as she staggered under the impact of the sudden image.

Her vision cleared, and she looked into the
face of the man from her vision, though he was much younger
standing before her.

He continued on his way, holding out his hand
to the woman awaiting him. The woman who would die in twenty three
years from ovarian cancer.

Sofia shrugged the sense of foreboding away
and stuffed her hands into her pockets. Her fingers brushed the
folded paper Jake had given her. She pulled it free and stared at
it, once again compelled to the name written there. She made her
way to a coffee shop and sat at a table in the darker end of the
shop, hot cocoa in hand. Someone careened into her as she pried her
cell from her pocket.

“Toby, watch where you’re going!” a mother
scolded the five year old sprawled on the floor.

Sofia reached for him, helping him to his
feet.

Toby, sprawled in the middle of the street
after being hit by a car, blood trickling from his skull into a
nearby storm drain. His dark eyes were open and staring.

“Sorry about that,” the young mother said,
flashing a smile.

Sofia blinked out of her stupor.

Yet another symptom of her illness: insanity!
She looked again at the name on the paper and dialed.

“This is Sondra. How may I direct your call?”
a pleasant voice answered.

“Um, hi, I uh, found this number on Dr.
Bylun’s blog. I’m not sure he can help me, but I would really like
to speak to him.”

Children of Ash: A Meridian Six Novella by Jaye Wells
Tar Baby by Toni Morrison
Lost in Tennessee by DeVito, Anita
Midnight Rainbow by Linda Howard
Kitty Raises Hell by Carrie Vaughn
Supreme Justice by Phillip Margolin
The Unfaithful Queen: A Novel of Henry VIII's Fifth Wife by Erickson, Carolly
The Forgotten Map by Cameron Stelzer
Peregrinatio by Matilde Asensi
A Duke to Die for: The Rogues' Dynasty by Amelia Grey
Our partner