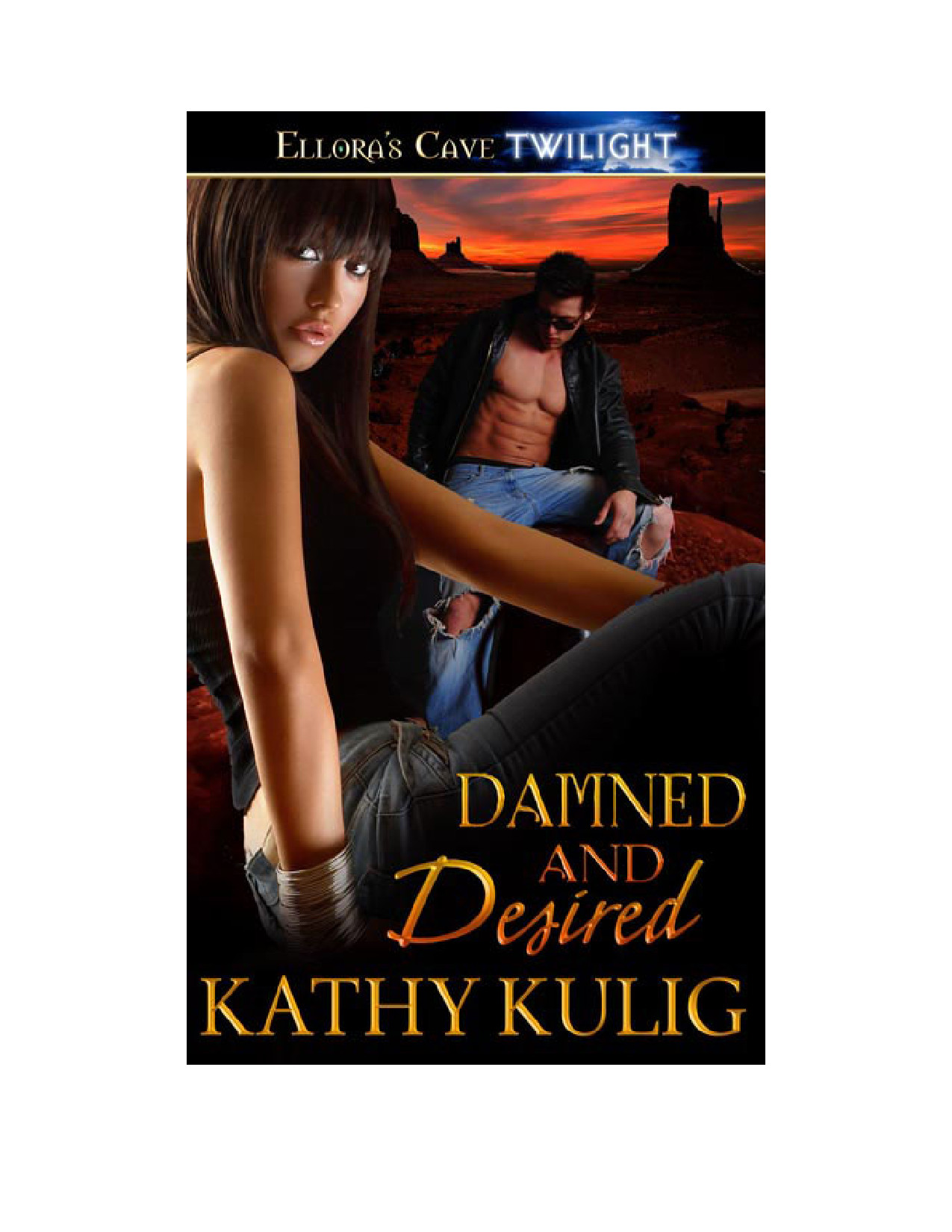 Stand-alone sequel to Desert of the Damned.

She’s a demon, he’s a shapeshifting leopard. From their first meeting in the Arizona desert, passion ignites and trouble begins. As a demon, Sakari Lock must harvest lifeforce energy through sexual seductions to sustain her exiled world. But when Sakari meets Brad, she breaks the number one rule of Anartia—don’t get personal with your quarry.

Physician’s assistant Brad Montag is drawn to Sakari’s lustful advances with a blazing desire he can’t explain, unaware of how dangerous she is. No matter how enticing, she’s a complication he doesn’t need until he can conquer his past and regain control of his shapeshifting abilities. Sex this wicked and good can only lead to disaster.

When immortals from an alternate dimension try to free their exiled world, Brad is caught in the middle of a battle that could destroy not only him, but the land he loves.

He never saw my first published novel but always said I’d get there.

Many thanks to Susan, who told me at RomantiCon she had a sneak peek of this book and it blew her away. To Helen, my editor, who’s not only a talented editor but a lovely person. And much gratitude to the staff at Ellora’s Cave, who does an incredible job.

Becky, Karen and Kathleen, my critique partners, who continue to teach me how to be a better writer.

Thank you to my husband for his help and support, and for all the dinners he has cooked so I could write.

The author acknowledges the trademarked status and trademark owners of the following wordmarks mentioned in this work of fiction: Band-Aids: Johnson & Johnson Corporation

“Why am I being punished?” Sakari Lock didn’t resist as Zorian raised her arms over her head and manacled her wrists, then secured the chains. Resisting would do her no good and would only make the session longer. Besides, his size and strength alone could restrain her without the chains. There was no escape for her or anyone exiled on Anartia.

He gave a “Hmmm” ignoring her questions and angry tone as he pressed her shoulders against the marble column. A fierce wind howled through the great hall of Anartia, penetrating the thin fabric of her tunic and stirring her long hair. Outside, the storm assaulted their island world, blowing mammoth waves against the jagged cliffs and drumming rain on the temple’s roof. How much more could their world take? The magnetic bonds anchoring their alternative universe in a dimension close to Earth could cause Anartia’s destruction if the Drones weren’t performing their duties. Sakari’s performance as a Drone would not be called exemplary, which partly explained her predicament. She met Zorian’s gaze but didn’t see any emotion.

“The demoness pronounced judgment but did not mention punishment. She said
trained
,” Sakari reminded him, hoping her annoyance hid her fear.

Zorian’s smile was slow and amused. His blue-gray eyes held a glint of danger. The trainer and disciplinarian of all the Drones didn’t respond. Instead he wrapped a chain around her thighs, spreading her legs. Clamping her teeth tight, she raised her chin and glared at him. “Why am I being punished?” she asked again, knowing her defiance would only make this session more difficult.

“Punished?” His smile faded. “Of course you would think that.”

She stood silent for a long moment. “What do you mean?”

Kneeling on the floor, he attached the chains first to her ankles and then to the bolts on the floor so her legs were spread. His broad back muscles flexed as he worked the chains. His long, dark hair was still damp after bathing in the pool. The demoness had interrupted his bathing with the other slaves to do her bidding.

Despite her predicament, Sakari was still distracted by Zorian’s handsome features and masculine presence. Drone or slave, no woman could resist Zorian.

“You don’t care much for sex,” he replied without looking into her eyes.

She had to laugh out loud. “And what gave you that impression?” Her nipples protruded from her tunic. Couldn’t he see? And her pussy throbbed with need even though she knew in a few moments Zorian would be inflicting pain. Her punishment. A punishment she deserved.

“You’d never seemed satisfied when having sex with me.” His mouth was tight.

Now his eyes flashed with anger and a bit of hurt.

“That was over a century ago. There was never love between us. Just two slaves looking for physical comfort in each other’s arms, a brief escape from Anartia.”

“Aren’t we all slaves? Damned in this world until Gwyllain’s consort finds a way to break us free?” She softened her voice. She didn’t need to put Zorian in a worse mood.

“Perhaps. Your coolness toward me is why I thought you did not need training before going to Earth. I was tragically wrong.” He moved against her. His bare chest rubbed against her breasts, separated only by the thin material of her tunic. Her nipples puckered even tighter. Warm, rough hands moved along her skin, beginning at her manacled wrists, down her arms, skimming the sides of her breasts, then over her hips and slipped behind to her buttocks. He pressed his hard erection against her mound.

Parting her lips, she sucked in a small breath and rocked her hips into him.

“My coolness toward you then was because I knew you were in love with another.”

He pushed away from her.

Delaying the inevitable, she kept him talking to postpone what was coming.

His eyebrows rose. “Who do you think I was in love with?” He picked up a braided whip from the table. With a flick of his wrist, the tips cracked the air. “One of the slave girls?”

He turned his back on her and moved over to the wooden table, replacing the whip.

Did she dare answer him?
“And why do we have to do this in the great hall?”

Zorian gave her a warning look then returned to finish securing the chains. “Tarik requested the training to be done here instead of my quarters.”

She looked across the hall at the rulers of Anartia. Gwyllain and her consort, Tarik, were accepting their offerings of chi from a male and female Drone on the wide lounge.

The male Drone was on top of the demoness, pumping his cock into her. The demoness didn’t touch the man in any way other than to adjust his position for her comfort. After the man ejaculated, she shoved him aside and waved one of the slaves over. The slave brought her a basin of water, soaps, scented oils and fresh towels. Then the next Drone stepped up for his offering.

Tarik appeared to take a bit more pleasure with his Drone, fondling the woman’s breasts, grabbing her ass. But after the woman reached her climax, he too, released her and requested attendance from slaves. Other Drones waited in line to transfer their collection of lifeforce energy to the two conduits of Anartia—the rulers, Gwyllain and Tarik.

“In the thousand years on Anartia, I have not seen so many Drones giving their offering at one time.”

Zorian glanced over his shoulder to see what Sakari was looking at. “Missing your old job?”

She nodded. “I’ve always served the mistress as her slave. I do not know the duties of a Drone. I’ve tried and failed with devastating consequences.”

“You will learn. All the Drones are working much harder now. Tarik’s projects are causing quite a drain on Anartia.”

When Zorian finished securing the chains, he stood, trailing his hand up her thigh.

The light touch sent a ripple through her nerves, as she remembered how skilled he could be with his hands. The involuntary response was so sudden and so intense, she had to look away or he would see the desire in her eyes. Zorian still had that effect on her. How could she possibly be getting turned on considering what was about to happen?

Sliding the table over in front of her, he picked up each object one by one, giving her an opportunity to examine them. She knew too well, what each of them were for, especially the boltstick. The cone-shaped object with a metal loop at one end always brought the loudest cries from his subjects. She gripped the chains again.

“Would you like me to explain how this works?” Next to the braided whip, he held up the boltstick. “Or this.” He picked up rod-shaped object that would expand in width and length and could be used vaginally or anally. She knew what all the objects were.

Why was he taunting her?

She stared at him, not answering. He dropped the objects back on the table and came close, his hand stroking her cheek. The spicy incense burning from the censors mingled with Zorian’s male scent. His skin glowed in the flickering light from the flaming sconces, hanging on the white marble walls.

Christmas with Jack by Reese, Brooklyn
Office Perks by Monica Belle
All of You by Gina Sorelle
Knockout! A Passionate Police Romance by Emma Calin
Confectionately Yours #3: Sugar and Spice by Papademetriou, Lisa
The Paranoid Thief by Estes, Danny
Dead Of Winter (The Rift Book II) by Duperre, Robert J., Young, Jesse David
Ain't Gonna Be the Same Fool Twice by April Sinclair
Field of Schemes by Coburn, Jennifer
Pretenses by Keith Lee Johnson
Our partner