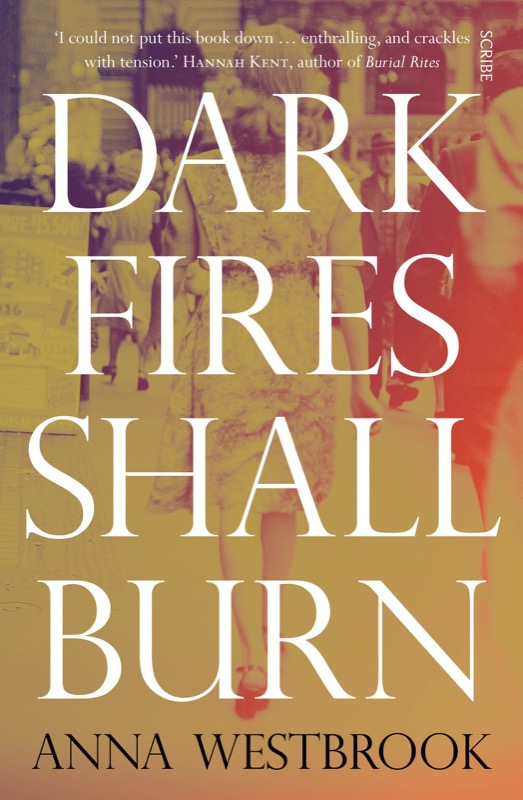 Anna Westbrook is a Sydney-based writer and critic. She holds a PhD in creative writing and lectures at New York University Sydney. She was shortlisted for the
Australian
/Vogel Literary Award at the age of twenty-one, and has also been a recipient of an Australian Society of Authors mentorship and an Australian Poetry Poet in Residence award. Her work appears in publications in Australia, the United States, and France.
Dark Fires Shall Burn
is her first novel. 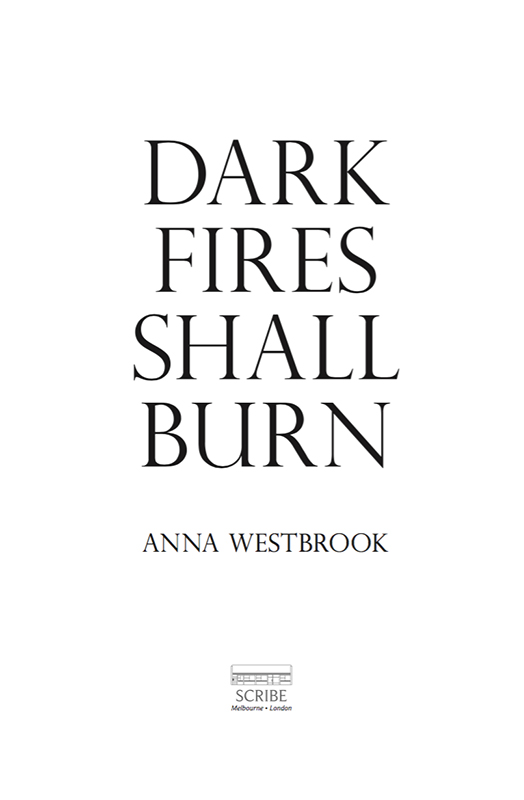 Epigraph from âDark Fires Shall Burn' by Dorothy Hewett: copyright Â© Dorothy Hewett and reproduced with kind permission from the Hewett estate and UWA Publishing.

For my mother and father,
and for Kaylee Hazell

The dark fires shall burn in many rooms;

will they sometimes miss me with my tangled hair â

crouching in winter with their cold hands trembling,

Frances rests her head against a pockmarked cherub, the stone cool on her skin. She likes the statue's pretty lips and lichen freckles. The air in the cemetery is still, almost taut with quiet, and she and Nancy have been told more than once not to play here. You find all sorts lurking. Drunks. Lunatics. Devils.

âCount to one hundred and don't go sneaking any looks,' Nancy had ordered Frances. There are twelve acres, give or take, in the old cemetery, and many places to hide. Sometimes Frances feels she has stepped into a cave at the bottom of the sea as she walks through those wrought-iron gates, their spears rooted in the sandstone like the points of King Neptune's trident. It reminds her of a reading primer at school,
The Myths and Legends of Antiquity
, which has on its cover a drawing of Neptune, a bearded, bare-chested man emerging from the waves. Mermaids loll on rocks nearby, their white breasts pearly and curiously nipple-less.

Leaves, dewy from rain, cling to Frances' boot â she can feel them through the toe. She opens one eye and sees a fat-bellied lizard blinking at her from its perch in the winter sun. Her breath catches; she wants to reach out to the creature and touch it. The scaly thing slides, mercurial, flicking its long tongue, bottle-glass blue. It vanishes beneath the serrated tentacles of a couch honeypot.

The light is faltering, and she is unimpressed with the game they have been playing now for hours. Nancy could be the hide-and-seek champion of Newtown. Once she folded herself into her mother's haberdashery trunk and stayed there for four hours, well after Frances had tired of playing and gone home. Nancy had waited in the cramped dark, patient, holding on to the glow of breathless triumph. âThat Durand brat can disappear quicker than vermin down a dunny-can alley,' Frances' mother had said.

She will not close her eyes as Nancy ordered. Instead she pretends, pressing her face against the soft, lemony wool of her new cardigan. Mrs Reed worked on the birthday present for a month, burying it beneath her darning whenever Frances looked to catch her at it.

The jacarandas dropped purple Turkish carpets on her birthday, and now the same trees are fleeced by winter.

That day the creases at her mother's mouth rearranged themselves into a smile as Frances undid the string around her parcel and slipped her arms into the knitted sleeves with real appreciation.

âStand up and let's see it on then,' her mother said as she put Thomas down on the floor to pinch at the seams and fuss at her handiwork. She had a good eye and a steady hand, and had taken to sewing pieces for one of the factories up in Marrickville. The box of garments she worked on by lamplight every night slid neatly beneath her chair. Mr Langby, from the factory, arrived on Fridays to collect it, perspiring in the doorway no matter the weather. He always seemed to sweat most from his lead-coloured moustache, like a soiled paintbrush on his upper lip that he would dab and smear his handkerchief upon.

âIt's just like the ones in the windows at Grace Brothers.' Frances admired the cardigan, twirling.

âWell, look at you!' her mother said. âCan't let you run around looking like a ragamuffin anymore now that you're getting so grown up. Eleven years old and as tall as me.'

âTurn away my eyes from looking at vanity, and revive me in Your ways.' Her mother reached out reprovingly and caught hold of her wrist.

Frances nodded, but she was thinking of parading the cardigan for Nancy the next morning at school. Nancy was always at the gate first in the mornings, perched on the palings, one sandalled foot swinging, waiting for Frances before she'd go in.

One hundred â or close enough.

She wipes the graveyard dust off her pinafore and, picking up a hefty stick, beats a path through the grass. There's a crackle of cockatoos high in the trees, their screeches like the sound of paper tearing. Could an animal sin? It's something that's been on her mind lately. She had watched a kelpie bitch give birth once, in an alley; Frances was all alone, and transfixed, unsure of whether to call out. Five black-and-tan pups squeezed into emergence like balled-up socks. Each one was licked clean until its dopey eyes opened and it nuzzled to suckle at the teats, dark and long as her thumb. She wondered how the dog had got pregnant in the first place.

âNancy? Nancy!' she calls half-heartedly. Nancy's too good to be found this quickly. It's a pretense they go through, this game, and Frances knows she is indulging her friend. After the weekend's over, Frances resolves that they will play something else.

Above her, one or two of the birds scale off and wheel like the tiny glamorous airmen in their flimsy planes. Planes with fierce names like Spitfires and Hurricanes â or fierce, at least, for things that seem held together by spit and men's prayers, like the de Havilland Mosquito that blew up over Petersham last year, and the rags of metal fluttered down like the contents of a piÃ±ata from there to Camperdown.

Her mother had disapproved of the news. âMen shouldn't be flying around up there in the firmament. It's not God's will.' And for once Frances agreed.

It is becoming night already, in that swift June way where twilight is cursory, and the shadows of the graves shift and lengthen on the ground. âNancy?' she calls, worrying the bark off the stick in her hands and letting the chaff fall through her fingers. âWhere are you?'

Nancy and she have been friends since before she can recall. She has a vague memory of playing in the Durands' garden, too little even to walk, while their mothers hung out the washing on the line. Amid the billowing rigging of long johns and blouses, pinafores and girdles and brassieres, they had probably tumbled like pups. Their fathers were friendly from working together down at the wharves, but Nancy's pa was Frances' pa's boss. Mr Durand had come from an old family that had made their money from sheep out in Western Australia and lost it all, Frances knows. He had packed up and gone to Sydney with nothing but a silk tie and a pigskin case. Frances had often heard her parents talking about it in the kitchen after lights-out, when the smell of sherry and smoke crept under the door. âThe crash of '29 ripped the lining right out of his cloud,' Mr Reed liked to say when he was in his cups. âAm I right? Huh? Am I right?' And her mother would shush him.

Frances thought of Mr Durand as a steel-spring kind of man, full of coiled energy. He had a lopsided smile that covered his overlapping front teeth, and an honest chuckle that welled from his boot soles.

But the Durands had long since moved away from the Reeds, into a much finer house without the chickens and with someone to take the washing to the line. They bought a Ford, and once Mr Durand let the women sit in the car outside the Town Hall Hotel while he brought them shandies. Nancy and Frances drank raspberry lemonade, and Nancy's dad leapt onto the runner-board to pass the glasses into the back seat, just like in a film.

Yet Mr Durand had died in Sumatra in '44, and it was a terrible tragedy, Frances thought, not least because Mrs Durand sold the Ford. And not long after this, her own father, exempt from service due to scoliosis, had disappeared. One night there were raised voices, and the next morning Mr Reed left on a train. To the cane fields or the mines or some such occupation â her mother was not very clear. She got to enjoy the unusual levity of her mother in the evenings, which were no longer dominated by his anticipated return from the pub, liquored up and malcontent. Levity meant more bible readings but fewer whippings.

A few months later, her mother had taken to bringing up her breakfast, a few months after that, Thomas arrived. Once the initial novelty had dwindled, Frances' baby brother seemed to be no more of a hindrance to her day-to-day existence than another chook or puppy. She learnt that his mewling was fast plugged up with a dollop of mush, or, when he was cutting his teeth or sometimes just for a few hours peace, a large spoonful of brandy in milk.

Anyway, lately Frances has far more interesting things to concern herself with, and Mrs Durand is high on the list. Kate Durand is fascinating. Last summer Frances had gone with Nancy to watch her mother perform in
Much Ado About Nothing
by William Shakespeare. There on the playbill, right at the top, it read âstarring Mrs Katherine Durand as Beatrice'. Mrs Durand's raven locks had glistened in the footlights, prompting Frances to fantasise about the day she would sport raven locks of her own, even though she knew that Mrs Durand's hair under her wig was actually red as a rosella, just like Nancy's. Emerging later into the ripe evening, which was redolent with frangipani and the undercurrent of outdoor privies, Frances could recall shamefully little of the play other than that the characters were very cross at each other and one lady pretended to be dead and later reappeared, which seemed to fix everything. But the best part was that Mrs Durand kissed someone called Benedict at the end, and it was on the lips â mouth open! She wondered what it would be like to be an actress, a real one on the screen, and made up her mind that some day she would move to Hollywood, where they make the pictures.

If she squints she can make out the most fantastic spider web, pegged between two graves. The Harbour Bridge pales in comparison to such a feat of engineering. To think a singular spindly creature built all of that!

Suddenly the spider twitches, like a splayed, disembodied hand. Frances jumps back and utters a curse-word, crossing her arms and rubbing them, her skin red and starting to itch with an unexpected chill. She wonders if anyone else is around. A murmur of wind lifts the limbs of the trees and lets them settle again. Where is Nan?