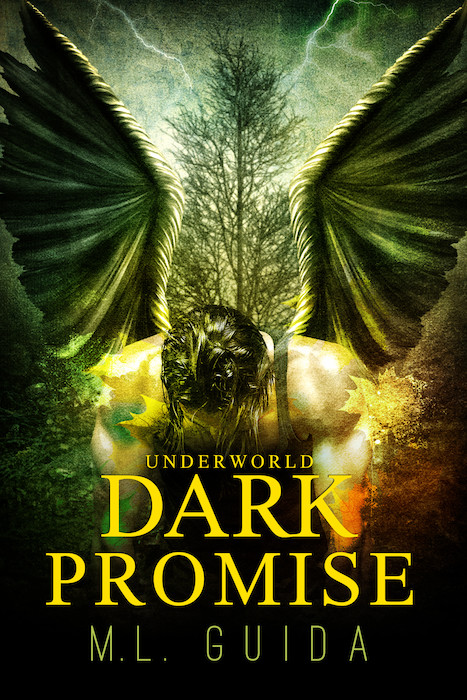 I’m delighted you decided to read
Dark Promise
. I love this book because it is based in Frisco, CO. Frisco is like a second home to me and the beetle kill in Frisco killed many of our beautiful trees which broke my heart. The supernatural always finds a way to help cure the problems in the world. I’m currently working on
Ravaged Soul
, which is Toby’s story.

Book loaning and reviews are ways that readers can help authors get the word out about books they love, so don’t hesitate to spread the word about
Dark Promise
and leave a review on any of the media sites.

The command thumped between his temples, urging him to hurt someone, anyone. Dragon fire burned in his chest and he forced the darkness back. It wouldn’t devour him like it had his father.

The Golden Tree’s Song of Tranquility, nearly inaudible now, calmed his raging dragon fire, bringing it back under control, luring it back to sleep. But when would it awake?

Someone clasped his arm. A dark figure stood next to him. The Wraith. He’d never seen her face, only her glowing red eyes staring at him from beneath her hood.

“The Darkness is beginning to take hold of you, young prince,” the Wraith rasped. “Only a few leaves remain on the Golden Tree. You don’t have time to squander.”

“I know,” he snapped. Darkness was consuming his people, strangling the tree. It was her damn fault. She refused to open the portal until the time was right, but accusing the Wraith would end up with his ass in a grave.

“On the Eve of the Equinox, during the year of her twenty-first year, the silver haired human, tainted with angel blood, who is mated to the last Lord of the House Wyvern, and has looked upon the Wraith and the Undead unchanged, will breathe upon the Golden Tree and return the Light to the people.” The Wraith tilted her head toward Castle Basilisk, his father’s palace. “By royal decree, your father has ordered any Dragon Demon, who has not yet turned feral be taken to the Chamber to await Gryffin the Torturer. The poor souls imprisoned inside are counting on you to liberate them.”

“No pressure there.” Eric vowed not to become a rabid demon, but each day, the fight became harder. Without the Song of Tranquility, his people had turned feral, fighting each other, tormenting each other, killing each other.

“You must find Cassandra Wright and bring her back here,” the Wraith said.

He kicked a rock, shaving off the weeds near the dying tree. “Cassandra doesn’t know anything about me or the Underworld. If you would have let me visit her, just once, we wouldn’t be in such dire need.”

“She wasn’t ready for you yet.”

He shoved his hands into his coat pockets to keep from wringing her neck. “She is now?”

“Of course. The prophecy is already in motion. Her abilities have grown.”

He rolled his eyes and crossed his arms. He was sick of hearing about how Cassandra could tolerate the Wraith, but not him. Christ, he might as well be a bloody leper. “Because she can tolerate seeing you?”

“And see the Undead.”

But the Wraith’s orders hadn’t stopped him from visiting Cassandra in her dreams for the past three years. Each time, he seduced her, kissing, licking and tasting her, thrusting in time to her soft whimpers as he thrust deep inside her. He never told her his name, always shrouding himself with mystery, hoping to stoke her desire for him and only him. Now, would be the real test. He wanted to feel her skin, taste her lips, bask in her smile rather than her image. “I won’t fail.”

“You’ll not be able to use any magic up in her world.”

“Since it is slowly dying, the Golden Tree’s magic will not run through you up in her world.”

“So, exactly how am I supposed to get her to come with me?” The dragon fire flared, demanding he attack the Wraith, a stupid Neanderthal move, which would end with the Wraith turning him into dragon dust. Not wanting to become like his father, he took a deep breath and concentrated on the Song of the Tranquility until he controlled his anger.

“Woo her, Prince, woo her.” She laughed. She laughed more like the wind whistling through a tree.

“Woo her?” How the hell was he supposed to woo her? He was a Prince for God’s sake. Dragon Demon women fell at his feet, begging him to take them, vying to be the next Princess.

The Wraith stretched out a twisted hand and in her palm, lay a black wallet. “You’ll need this where you are going, Prince. You’ll need to buy clothes and ski attire.”

He opened the wallet. A credit card, a license and stack of hundred dollars bills were tucked neatly inside. He stuffed it into his back pocket. “So, I will not have any magic?”

“Some, but it will fade fast. Use it wisely, Prince.” She pointed at the twirling blue sky. The wind howled and Eric’s hair whipped his face, cold air rushing over him. White clouds churned overhead.

The Wraith stood erect, her robe never moving. “When you have her, the gate will open. Go now, Prince, before it’s too late.”

Eric flipped out his wings and flew into the spinning sky. The wind roared and pushed him back toward the Underworld, but he fought the turbulence and headed for a small black opening. White foamy clouds blurred his vision and moisture stung his cheeks. Cold air gripped him.

His teeth chattering uncontrollably, he passed through the opening. Black midnight sky, a glowing full moon and glittering stars greeted him. He landed on the edge of the chasm and folded his wings. He moved his hand down his body and a black duster jacket clothed him, but did little to warm him. He shivered, clenching and unclenching stiff fingers. He jammed his gloved hands into his jacket.

Behind him lay a black sinkhole as wide as the Grand Turquoise Canyon back home. Back in the Underworld, the temperature never fell below seventy, but he wasn’t home. Here in the Rocky Mountains on a winter night, the ground rumbled. Dirt and snow closed the fracture.

Frosted pine and naked aspen trees decorated the park and lined an icy path. Last time he was here, he’d been a boy. His parents brought him for a vacation. Walter Byron Park was the gateway between two worlds, unknown to humans.

He exhaled and foggy breath swirled around him. Fresh jasmine overpowered the mountain pine. Cassandra. Thanks to his dragon ancestors, he could smell his mate a hundred miles away. His dragon fire roared, boiling his blood, raising his body temperature, sweat running down his back.

As he picked up his pace, he gulped mountain air, easing the fire back to a flicker. Shit, he wasn’t even by her yet. What would happen when he found her? When he touched her? He had to manage his dragon fire or he’d terrify Cassandra. He wanted to win her heart, see her smile and hear her laugh. A demonic inferno would have her scampering up a pine tree like a frightened chipmunk.

His boots crunching on the ice, he followed her titillating scent across a bridge, over a frozen river and down a dimly lit street. In front of a large two-story white home with a turret, a snow covered sign read
Galena Mountain Street Inn
. Cassandra was in there. Not caring if the inn had a room, he marched up to the front porch and ripped open the oak door.

Eric squeezed between the hideous purple settee and coffee table to get to the desk. The clock over the front desk read one AM, but he rang the bell anyway.

Bloody hell, where did one find such mismatched furnishings? He reached to hit the bell again when a door creaked.

A yawning blond woman shuffled to the counter. “I’m Isabella. Are you Steven? We’ve been waiting for you. Running a little late, aren’t you?”

She flipped limp, disheveled hair out of her eyes and frowned. “You are?”

“Do you have any identification?”

“Yes.” He gave her the license.

She examined it, glancing back at him several times before she handed it back. “We had a cancellation. You’re lucky Mr. Wyvern.”

He wondered if it was coincidence. His magic might be gone, but obviously the Wraith still possessed hers.

Clutching the key, he headed up the burgundy-carpeted stairs to the room. The sweet perfume of jasmine permeated from behind a door. He stopped. Cassandra was in there. He gripped the doorknob, but forced his hand back.

Control. Get a hold of yourself, man.

He opened the door across from Cassandra’s and turned on the lights. It was too much of coincidence for him to get a room so close to Cassandra. Definitely the Wraith’s intervention. Shutting the door, he tossed the keys onto a nightstand next to a bowl of shriveled up flowers. He whipped off his jacket and hung it in the closet.

A chill hung in the air and he wanted to have a glass of wine and warm his shivering body. Instead, he stripped, shut off the lights and climbed into bed. Hands behind his head, he stared at the ceiling. He didn’t have time to waste. What if Cassandra refused to come? She didn’t have much choice. He would not let his people die.

No demon had ever been mated to a human, but the Wraith had foreseen his union with Cassandra. The Wraith was never wrong. What if this time her vision failed her?

Tomorrow there would be no more dreams. Tomorrow he’d be able to touch, kiss and suck her satiny skin. How the hell would he be able to sleep?