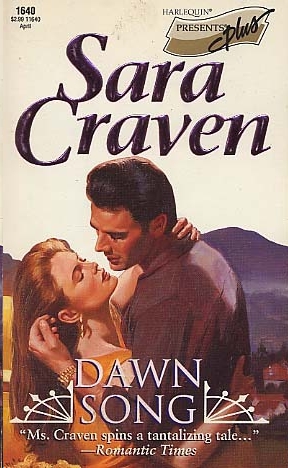 False pretenses. It was an auspicious and fateful beginning-tossed into the

Meg's own raging torment of desire and deception. For Meg's visit to the

charade for which she felt wretchedly guilty. And her plans hadn't included

a well-practiced line of seduction. Especially since Jerome made it clear he

wanted all of her secrets...body and soul. And that he wasn't about to

disclose any of his own!

'It's the perfect solution. You can go in my place.'

cut by a knife.

Meg Langtry cleared her throat. 'Let me get this straight,' she said slowly.

godmother's chateau, pretending to be you.' She paused, giving her stepsister

a long, steady look. Those are the basic elements of the scenario?'

well-deserved break. As long as someone turns up claiming to be Margot

Trant, what problem can there possibly be?'

'Oh, none of course,' Meg returned with terrible irony. 'The fact that we don't

even look alike is quite immaterial.'

styled fall of brown hair a disparaging look. That can be easily fixed. As for

could do it easily. You'll have no job to worry about once that grotty

second-hand bookshop you work for closes at the end of the week. And I

can't possibly get away. You must see that.'

'Why not?' Meg countered. 'I thought Parliament "rose" in the summer.

Surely Steven would give you leave.'

'Probably, if I asked him.' Margot's pretty face was suddenly intense, 'But

he's just on the point of asking Corinne for a divorce. I simply can't afford to

be away at this juncture.'

'I see,' Meg murmured drily. However distasteful she might personally find

it, this was what her stepsister had been working towards, ever since she'd

got the job as secretary to Steven Curtess MP, the young back-bencher who

was being tipped for junior ministerial rank in the next government.

'And Godmother has no right to summon me like this—right out of the blue,'

Margot went on petulantly. 'Good God, I haven't seen her since I was nine.'

'I wondered why I'd never heard of her.'

Margot hunched a shoulder. 'She's my great-aunt, actually—Dad was her

favourite nephew, and I was named for her. So we're all three of us called

'Amazing.' Meg shook her head. 'But irrelevant. Wouldn't it be simpler just

to write and tell her that you can't get away?'

'No, it would be extremely stupid,' Margot snapped. 'She has no children,

and no other living relative as far as I know. And a chateau in the Languedoc

isn't to be sneezed at as an inheritance. It's imperative I keep on the right side

of her.' She gave Meg a suddenly limpid smile. 'Or that you do, on my

'No way.' Meg bit her lip. 'Ethical considerations aside, we'd never get away

turns up on the appointed day. And you're far better suited to running round

after some dreary old lady than I'd ever be. Keep her sweet for me, and I'll be

'That's just the incentive I need, of course,' Meg said levelly. She pushed

back her chair. 'You're the total limit, Margot. Do your own dirty work.'

'Oh, are you going?' Margot inspected a fleck on her fingernail. 'I thought

the bookshop closed on Wednesdays.'

'It does. I'm spending the day with Nanny Turner, as I usually do.'

'Of course, in that sweet little cottage of hers— or should I say ours?'

There was a pause. Meg's eyes narrowed. 'Brydons Cottage is Nanny's for

life,' she said. 'My father made that clear before he died.'

'Yes, but not in writing, sweetie. There's nothing legally binding. Oddly

enough, Mummy was looking into it all the other day. Some friends of hers,

the Nestors, are looking for a weekend place, and Brydons would be ideal.'

Meg stared at her. 'You're not serious? Nanny adores that cottage.'

'I bet she does,' Margot said acidly. 'It's a very desirable property.'

'But she'd have nowhere else to go.'

Mummy has friends on the Social Services Committee. I'm sure they could

Meg drew a shaken breath. 'It would kill her to be in a heme. She's

terrific—firing on all cylinders. She can look after herself.'

'Then the choice is yours.' Margot spoke with cool finality. 'Go to the

Languedoc in my place, and I'll persuade Mummy that it would be a betrayal

of your father's memory to turn Nanny out.'

'That would make a difference?' Meg asked wrily.

'Oh, yes, she was awfully fond of him, even if she didn't go a bundle on

Nanny and her bossy ways,' Margot said with insouciance. 'Besides, I'm the

blue-eyed girl at the moment, and I know I can talk her round if I want.

Mummy's dying to have a son-in-law in the government.'

And to hell with Corinne Curtess and the children, presumably, Meg thought

through the month with Godmother none the wiser,' Margot wheedled. 'I

need your help, Meg. I've got to stay here and keep the pressure on Steven.'

'If I do this,' Meg said icily, 'it will be for Nanny's sake—not to further your

affair with a married man.'

getting a whole month abroad in France, all expenses paid, at the height of

the season. What more could you want?'

She sent Meg a complacent smile. 'I'll even lend you my car to drive over to

Nanny's. You'll need to practise your driving for France.'

Meg set her teeth. 'I haven't said I'm going yet.'

Margot's smile became almost cat-like. 'But you will,' she said. 'Or poor old

Nanny becomes homeless. It's up to you.'

A fortnight later, Meg, much against her better judgement, was on her way.

She'd intended to stick to her guns, but seeing Nanny Turner bustling round

her cosy home, happily oblivious to the threat posed by Iris Langtry's

friends, had made her rethink her position.

Iris herself was not too pleased with the bargain that had been struck, but

'Margot deserves a chance of happiness,' she sighed. 'And Steven is such a

fine man. His wife's one of these very
domestic
women, I understand. He

needs someone to work alongside him, and boost his political career.'

If that was how he saw Margot, it was little wonder the country was in such

a hell of a state, Meg thought uncharitably, as she made her unwilling

preparations for the trip. Certainly no one could ever have described her

stepsister as 'domestic'. She could barely boil water.

One unexpected bonus was the acquisition of some new clothes, which Iris

insisted on paying for.

'You're supposed to be my daughter,' she cut short Meg's protests. 'You can't

go looking as if you've dressed at War on Want.'

The new hair colour, too, had been an unexpected success. Meg's own

natural shade had been softened to a dark blonde, and subtly highlighted.

where she'd worked for the past eighteen months, following the proprietor's

retirement, or to worry about where she'd work once her French escapade

was safely behind her. For the moment, she had enough problems to contend

To her surprise, her employer, Mr Otway, had nodded approvingly over her

trip. 'Ah, the Languedoc. Land of the troubadours. And of the Cathars,' he

'Religious sect in medieval times. Believed all life was basically evil, and a

constant search for the light. Condemned, naturally, as heretics by the

established church who launched the Albigensian Crusade against them.'

Mr Otway sniffed. 'Not just a holy war, of course. The whole of the

Languedoc was made up of rich states, independent of the King of France.

He hated Raymond of Toulouse, the greatest of the southern lords, envied

him his wealth, and the beauty and culture of southern life. Decided to use

the Cathars as an excuse to move against him, and grab his possessions, all

in the name of religion.

'But you'll love the Languedoc,' he went on more cheerfully. 'It's a

at the look of apprehension on Meg's face. 'It will do you good,' he said with

severity. 'Shake you out of a rut you're far too young to occupy.'

'But I've been happy,' Meg protested.

'No, you've been content—a very different thing. But I guarantee, child, you

won't be the same person when you return from the Languedoc.' He gave a

dry chuckle. 'No, not the same person at all.' He patted her on the shoulder. 'I

full of the warm south" for me,' he added.

'Warm south' was putting it mildly, Meg thought, as she sat in a traffic jam

outside Toulouse airport, feeling the perspiration trickling down between

The car she'd hired was like an oven already, and she was only at the start of

her journey to Haut Arignac. She'd arrived in France two days earlier than

she was actually expected, with the intention of doing some sightseeing

It would also give her a chance to practise her French. She'd been the star

pupil at school, and gone on to improve her fluency at evening classes. But

there'd be no opportunity to try out her skill at the Chateau Haut Arignac, as

Margaret de Brissot had been told during the preliminary correspondence

that 'Margot' spoke no French.

'Quite useful really,' her stepsister had commented offhandedly when Meg

protested at the arbitrary decision. 'If anyone asks awkward questions, you

'I don't want to play anything,' Meg said bitterly.

She felt wretchedly guilty about the charade she was undertaking. She was

setting out to deceive an elderly, nearly blind woman, and for what? To

further her stepsister's ruthless determination to break up her lover's

marriage. And to hurt some unknown and presumably unsuspecting woman

and her children along the way.

Even the knowledge that Nanny's occupancy of Brydons Cottage would be

secure couldn't alleviate her profound misgivings about the whole affair, and

her unwilling role in it. Damn Margot and her sordid affair, she thought,

drumming her fingers on the steering-wheel.

Then, as if a drain had been unblocked somewhere, the traffic moved off,

and Meg realised she was on her way. She proceeded with a certain amount

of care, at first, accustoming herself to the unfamiliar road conditions, as

well as the novelty of having a vehicle totally at her own disposal. But it

didn't take her long to realise she was on good roads, with far less volume of

Orphan Pirates of the Spanish Main by Dennis Danvers
Heartsville 05 - Bloom Box (Cate Ashwood) by Heartsville
A Bride for the Bear (Bear Creek Clan 6) by Harmony Raines
Body and Soul by Roberta Latow
His Dakota Bride (Book 5 - Dakota Hearts) by Mondello, Lisa
Olive of Groves and the Great Slurp of Time by Katrina Nannestad
Ryan Hunter by Shelly, Piper
The Narrow Road to the Deep North by Flanagan, Richard
All the Sweet Tomorrows by Bertrice Small
Apprehended (Amber Alert Series Book 3) by Sara Schoen
Our partner