Dead and Buryd: A Dystopian Action Adventure Novel (Out of Orbit Book 1) 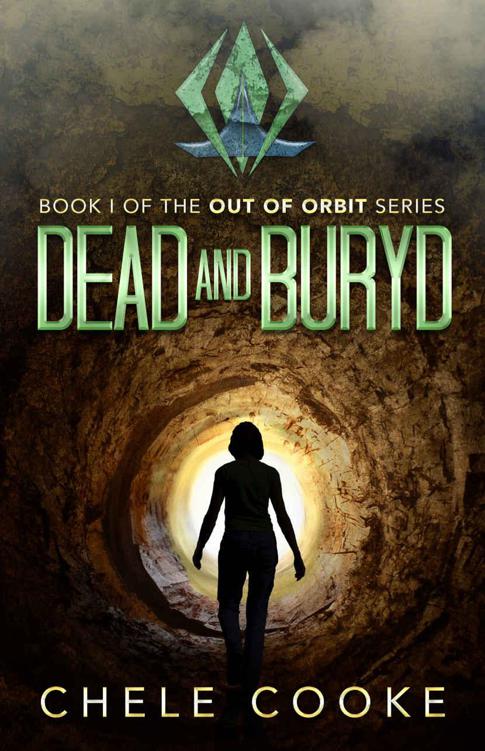 BOOK I OF THE OUT OF ORBIT SERIES

Copyright © Chele Cooke 2013.
All rights reserved. No part of this publication may be reproduced, distributed or transmitted in any form or by any means, including photocopying, recording, or other electronic or mechanical methods, without the prior written permission of the publisher, except in the case of brief quotations embodied in critical reviews and certain other non-commercial uses permitted by copyright law.
Publisher’s Note: This is a work of fiction. Names, characters, places, and incidents are a product of the author’s imagination. Locales and public names are sometimes used for atmospheric purposes. Any resemblance to actual people, living or dead, or to businesses, companies, events, institutions, or locales is completely coincidental.
Cover Design © Design for Writers 2014
Book Layout © BookDesignTemplates.com 2013.
Dead and Buryd / Chele Cooke. -- eBook 2nd edition, mobi. 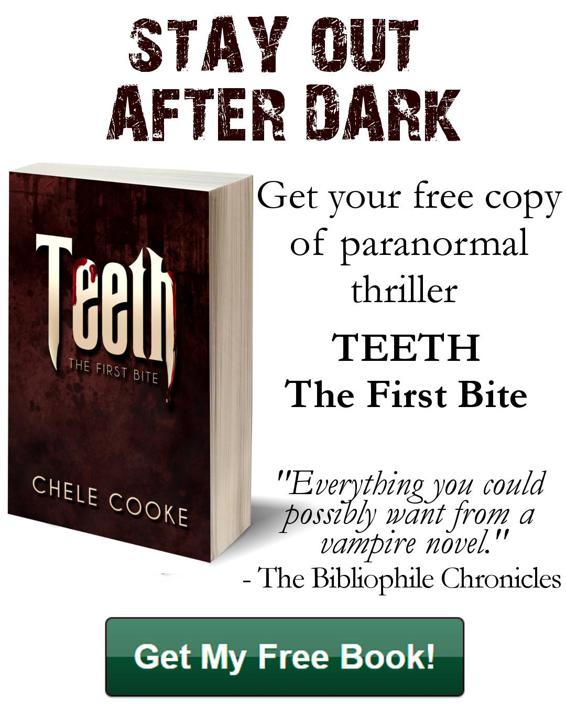 For Moa
For helping bring “Out of Orbit” to life.
Without you, this would still be “buryd” in the depths of my laptop.

Days that Came Before

“Grandda’,” the young boy asked, pushing his blanket back impatiently and gathering his stuffed toy horse up in his arms. “You tell me a story?”

Lyle lifted his head, looking away from the knife and half-carved wooden block in his hands. A small, tired smile slipped over his lips, and he gave a gentle nod. It was already a long way past the boy’s bedtime, but he could hardly blame him for being restless. The heat had set in, and the thick air remained uncomfortable long after the sun had set.

Pushing himself up from his chair, Lyle moved over to his grandson’s bed, fixing the blanket neatly across the end before he sat down. The bed was low and it made his joints ache to sit on the soft mattress, but the boy would only complain if he remained on the other side of the room for the story.

The boy thought for a moment, nuzzling the horse’s soft flank as he blinked sleepily.

Reaching out and leaning across the bed, he gently pushed his grandson back down onto the mattress and brushed his dark brown hair away from his eyes. If he was going to tell him a story, the boy could at least pretend to try to sleep.

“You had that one last time, Brae,” he reminded him.

Lyle rolled his eyes. He was sure that he’d told Braedon the story of the ships the last half-dozen times. Just like his son, Braedon’s father, his grandson never tired of hearing the tale of their past.

“Alright,” he answered with a slow nod.

He leaned away from Braedon, placing his knife and the block of half-whittled wood down on the floor before looking back at his grandson. With his son, Halden, working long hours so often, it was a regular arrangement that he put Braedon to bed. Lyle didn’t mind. In fact, he rather enjoyed it. The young boy was almost as enthralled with his stories as his own children used to be. Though they were both grown now, no longer needing stories at bedtime, when they even came home at all.

“Long, long ago, Os-Veruh was a beautiful and rich planet,” Lyle began, smiling back at the grin spreading across Braedon’s face. “The Veniche people lived in one place, they had everything they could ever want, even if they sometimes complained that they didn’t.”

Braedon rolled onto his side, knees drawn up towards his chest as he hugged the horse tightly and turned it in his arms so that the toy could hear the story better.

“Men fought for more, to see more of the skies. So they spent years building big ships that could float on air instead of water.”

“Grandda’, you forgot the men who look up!” Braedon whined.

“I was getting to it,” he answered. “Os-Veruh had everything, from men who examined the deepest oceans, to those who looked at the furthest stars in the night sky. One day, one of the sky watchers saw something. He saw a shooting star heading towards Os-Veruh. The Veniche people panicked. No one knew whether the meteor would hit the planet or sail past, but the sky watcher said it would collide with them, and they had to believe him.

“The big sky ships were almost ready, and all the people argued and fought over who would be allowed onto them. Men argued using their power and their money, claiming that those things made them more worthy of saving. Others asserted their intelligence and skill, saying that those things should be what mattered.”

“What?” Lyle asked, thrown from the rhythm of his story by Braedon’s sudden question. In the times he’d told his grandson the story, he’d never asked that before.

Lyle reached up and scratched his cheek. He had to admit, he didn’t know. He’d never stopped to think about which skills would have been prized above others back then. He could only imagine that the people on the ships would have needed medicines and medics to administer them.

A quiet chuckle came out in a breath as Braedon nodded resolutely and settled himself back against the pillow. Lyle blinked, the interruption having dragged his thoughts from the flow of the story.

“Oh, yes, I was,” Lyle agreed. “The arguments and battles over who had places on the ships continued until the final days, and then one year before the meteor was set to hit the planet, the ships took off with as many people as they could carry.”

“Into the sky to search for new places,” Braedon said with an enthusiastic nod against his pillow.

“That’s right. The ships went in all directions. Each ship carried a machine that could talk to the others even over millions of miles. If one ship found another planet, they could tell everyone else.”

“But the meteor didn’t hit us!”

Lyle frowned, pursing his lips as he looked down at his grandson. Halden and Georgianna, his own children, had not jumped ahead in the story every chance they could. Then again, it could have been that he just didn’t remember. It had been a long time ago. Halden with his bright green eyes and dark hair like his own, Georgianna with her honey-gold curls that were always in a mess. He missed them as children, hanging on his every word like Braedon did now.

“No, it didn’t,” he said. “The meteor went straight past Os-Veruh, colliding with the planet that circled between Os-Veruh and the sun. That planet was destroyed, broken into thousands of pieces which would become meteors of their own.

“The Veniche who remained on Os-Veruh were relieved, and celebrated that they had been saved. However, as the days and months passed, they realised that things were not the same. They were travelling closer to the sun than they had before. They realised that the other planet had been keeping them away from the sun. The people began to suffer: some were killed and others driven mad by the heat. Some people fled north where the heat was less, hiding inside their buildings and creating tunnels under the ground to escape the sun.

“Next came the freeze as the planet moved further from the sun again. The snow froze everything it touched, and people ran south to escape as much of the blizzards as they could.”

“I don’t like the freeze,” Braedon complained in a small voice.

“No, many didn’t,” he answered. “But families banded together, set on helping each other through the worst of it.”

“Tribes! Tribes!” Braedon chanted, his dislike of the freeze forgotten as he pushed himself up.

Lyle reached out and settled the boy back down before he continued.

“Yes, Brae. All across the land, families joined together to share their skills, forming tribes who travelled together.

“The Kahle, one of the biggest tribes, had two settling grounds, Adlai in the north for the heat, and Nyvalau down south for the freeze. The Kahle built up these grounds, creating sturdy homes and even tunnels in Adlai to escape the sun.”

Braedon was getting sleepy, Lyle could tell. After looking after the boy for most of the heat while his father went off to find work, he was getting pretty good at telling when the youngster was ready to doze off. The tight ball he’d curled his body into loosened a little, and lifting his weight from the bed for a moment, Lyle tugged the blanket out from underneath him and draped it over Braedon.

“It was decided by the elders of each tribe that a ledger would be kept,” he continued, setting back into his spot at the end of the bed. “When people joined in love, when children were born and people died it was written down, so that, like the Veniche before them, they could remember the past.”

“Grandda’,” Braedon mumbled. “Who has our ledger?”

Lyle wasn’t entirely used to being ordered around in the telling of his bedtime stories, especially not by four-year-olds. However, being his only grandchild, he let Braedon off with a lot of things he knew he shouldn’t.

“For generations, they lived this way. Travelling between the two grounds, the Veniche people lived in peace.”

Braedon rolled himself further onto his stomach, burying his face into his pillow.

“Then the Adveni came,” he mumbled through the material.

“Yes, Braedon,” Lyle said as he got up from the bed. Leaning over Braedon, he smoothed the blanket across his grandson’s small body and kissed him gently on his temple. “And then the Adveni came.”

He made each turning the same as he had the last time. He’d been warned against it and told to take a different route through the buildings on each journey, but he liked the routine of a well-trodden path. He liked knowing exactly where the blind spots were on a journey and where he had to be extra careful. The sprawling training grounds were best avoided entirely. There were too many eager young Adveni who wanted their first capture. He knew the routes that caused the least problems, so while it made it easier for others to follow, he took those every time.

High above, the sun made a slow progression towards the horizon. In the Adveni quarter, the polished stones of the buildings shone like the sun themselves in the suffocating heat. The buildings’ occupants were as deadly as the close, mid-heat sun. Perhaps more so, as it didn’t take days for an Adveni to kill. It took moments, minutes, or hours… depending on their wishes.