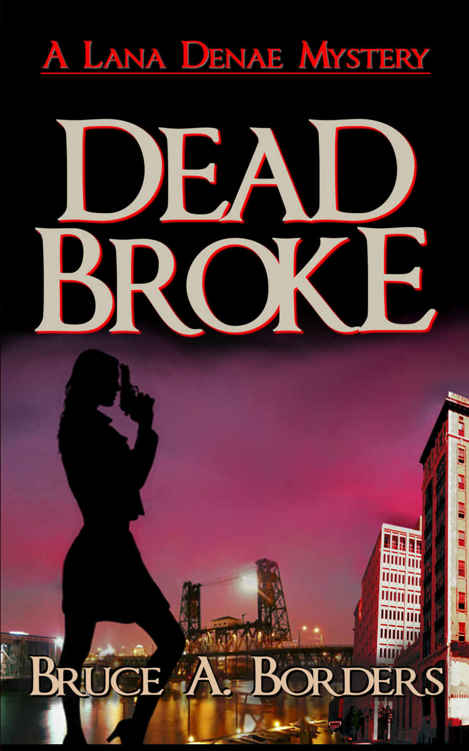 Except for use in any review, the reproduction of this book in whole or in part in any form by any electronic, mechanical, or other means, including xerography, photocopying, and recording, or in any informational storage or retrieval system, is forbidden without the express written permission of the author and publisher.

You may also enjoy these books by Bruce A. Borders:

How far would you go to protect your daughter?

The justice system is just a system,

not a just system.

Parkview Manor has a secret and 18-year-old Cynthia Holt is curious!

As a homicide detective, Lana Denae had seen enough dead bodies to last a lifetime. At thirty-five years old, she was ready to trade in her badge for a less morbid career. But first, she needed to solve her current case.

She frowned, glancing around at the paneled walls in the dimly lit one-room apartment. The way things were going, instead of switching careers; she might well retire on this job. After two weeks of investigating—if it could be called that—there were still no credible leads and she had no suspects. Lana shook her head and gave a frustrated sigh. Some detective she was.

Lana had been with the department for nine years, making detective after just a year on the force. After the unfortunate death of her partner, Brent Daniels, who also served as her training officer and mentor, she had finished their last case alone. That was the way she liked it—alone.

Due to her outstanding record, the best in the department, Lana’s captain was satisfied with keeping things the way they were and she had remained a one-woman team. Understandably, the other detectives in the Homicide Detail of the Portland Police Bureau were not always supportive of her sweet deal. They constantly ribbed her for the special treatment, some good-naturedly, and some with a touch of animus.

But the truth was most of them didn’t want to work alone. They liked having a partner.

A partner divided the workload, provided another mind to bounce ideas off, and guaranteed, someone would always have their back. A partner also meant having another person to share the blame when things—as things are prone to do—went sideways.

Of course, that meant sharing the glory as well, when things worked out. This was sometimes hard for an ego-driven individual, made worse when they were constantly compared to a fastidious woman—a woman who worked alone.

Lana knew there were some hard feelings from a few of her fellow detectives. But that couldn’t be helped. She wasn’t on the force to make friends or win a popularity contest. And she certainly didn’t feel the need to hog all of the limelight.

Accolades were fine, she supposed, but public acclaim made her extremely uncomfortable. She tended to cringe any time someone offered her praise or recognition for her achievements, and usually skipped the annual awards ceremony for the Portland Police Bureau.

Her office walls were lined with awards and citations. But while awards were nice, they didn’t help one wit when it came to solving the next murder.

Lana let out another frustrated sigh. If she didn’t soon find some answers, there would certainly be no awards on this case. That, however, was easier said than done. And murders weren’t solved by mere talk.

As she had learned early in her career, solving a murder consists of answering a few simple questions: who, what, where, when, how, and why. Nothing more. But while the questions may be simple, the answers seldom were.

Naturally, investigators tend to focus on the “who” more than anything else. But as Detective Daniels had often told her, “Figure out the ‘why’ and you are a lot closer to finding the ‘who.’ Same goes for the rest of them,” he had said. “Each of the questions, when answered, moves you closer to finding the truth of who was responsible.”

Lana had come a long way since those early days on the force. She knew how to deal with setbacks; how to cope with obstacles. And she knew how to work a case with little to no evidence.

Although Daniels had been laid to rest some four years ago, in her mind she could hear him saying, “If all else fails, go back to the scene and start over. Go over the evidence again, piece by piece, from the beginning.”

Which is why she now stood in the vacant apartment looking for something—anything—she, and the CSI guys might have missed. There had to be a clue somewhere. Amid stacks of papers and women’s magazines, shelves lined with trinkets, pictures of by-gone days decorating the walls, and a floor strewn with piles of sewing scraps and yarn, was perhaps the answer she was looking for.

Closing her eyes, Lana listened to the silence of the place, trying to concentrate. Noticing the steady tick of a clock, and the loud hum of the refrigerator, she did her best to block out the distractions and envision the scene as it had been described to her.

Two weeks ago, at nine thirty-two on Monday evening, the Portland Metro 911 Center had received a call from a Paul Borland, building manager of the Rose City Apartments. Mr. Borland reported that he suspected one of his tenants might be incapacitated; sick—at the very least—or worse, God forbid.

Neighbors had told him they hadn’t heard from the lady in Apartment 607 for three days, the man said. This was more than a little peculiar considering the tenant, Mrs. Wymer, was housebound and depended on her neighbors for many of her day-to-day needs.

After relaying the information to the dispatcher, Mr. Borland had requested a welfare check.

The 911 dispatcher immediately notified the Central Precinct and two officers had instantly responded, reaching the apartment complex at twenty-three minutes ’til ten.

The first thing the officers noticed after climbing the stairs to the sixth floor was the smell. Not an overwhelming smell but strong enough. The kind of stench that burned in one’s nostrils.

Finding the apartment door locked and getting no response to their repeated knocking, they asked Mr. Borland to open the door.

“Not without someone more important than you giving me the okay,” the man protested. “No offense, but I’ve got to be careful. People sue for the least little thing these days.”

Frustrated by the delay, but nodding in an understanding way, the officers didn’t argue. Notifying dispatch and apprising them of the situation, they proceeded to questioning the neighbors who had reported the missing woman.

The first couple they talked to from across the hall, the Jensens, did not offer much. No, they hadn’t seen the lady from Apartment 607. Hadn’t heard from her either. But that wasn’t unusual, they said. They both worked long hours and didn’t see too many people in the building.

The gentleman who lived next to the Jensens said he hadn’t seen or heard from the lady either, which is why he’d called Nellie Langstrom, the woman who lived in Apartment 609 at the end of the hall. After discussing Mrs. Wymer’s notable absence, and becoming concerned, the two decided to inform Mr. Borland. Nellie had placed the call.

Listening intently, the officers nodded, made a few notes, and moved on down the hall. With Mr. Borland following along behind, the two in uniform approached 609, Nellie Langstrom’s apartment.

At their knock, a poor, old, ragged lady eased open the door.

“She’s either sick or, dead,” the woman stated matter-of-factly the minute she saw the officers, knowing why they were there. “Dead more’n likely.”

“Haven’t heard a peep out of her for three days. Usually, she’s got the TV blaring, banging around in there, or calling for me to pick up something or other from the store. And haven’t you noticed that awful smell?”

Dream a Little Dream by Sue Moorcroft
Through The Lens (Creative Hearts Book 1) by Jackson, K.M.
Uncovering the Silveri Secret by Melanie Milburne
On Trails by Robert Moor
Briarpatch by Tim Pratt by Tim Pratt
Zombie Games (Book 4): Road Kill by Kristen Middleton
Behind Her Smile by Luck, Olivia
La decisión más difícil by Jodi Picoult
The Thunder Lord: The de Shera Brotherhood Book One (Lords of Thunder: The de Shera Brotherhood 1) by Le Veque, Kathryn
Dreams to Die For by Alan G Boyes
Our partner