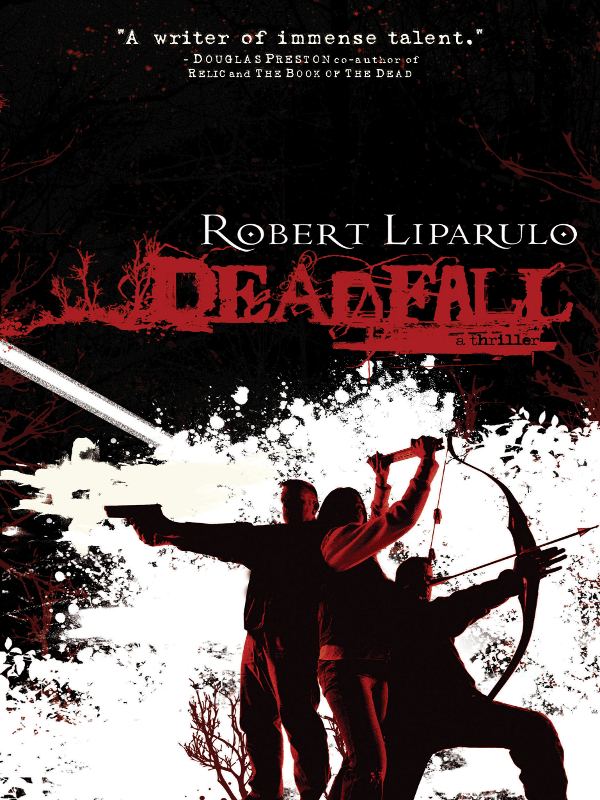 “
Deadfall
is a brilliantly crafted thriller with a terrifying premise and flawless execution. I loved it.”

“Another brilliantly conceived and terrifying thriller from Robert Liparulo.
Deadfall
will leave you looking over your shoulder and begging for more.”

“In
Deadfall,
Robert Liparulo gives us a fresh, fast-paced novel that instills a well-founded fear of the villains and an admiration for the people who refuse to be victims. It deserves the name âthriller.'”

“What if Mad Max, Rambo, and The Wild Bunch showed upâ-all packing Star Wars-like weaponsâin a small Canadian town? You'd have the thrilling adventure novel
Deadfall
. Robert Liparulo reminds us that small town life is still the scariest, and man's inhumanity to man is still The Most Dangerous Game.”

“High-octane thrills are Robert Liparulo's specialty, and boy does he deliver in this ultimate tale of survival.”

“Inventive, suspenseful, and highly entertaining. An engrossing and imaginative tale that sticks in your brain and makes you wonder about its real possibilities. Robert Liparulo is a storyteller, pure and simple.”

“Very rarely does a writer come along who can entertain at the highest level while exploring human character so effectively.”

“Robert Liparulo has written an edge of the seat thrillerâcomplete with characters you truly care about.
Deadfall
will keep you turning pages long into the night.”

âJoan Johnston,
New York Times
best-selling author
of
The Price
and
The Rivals

“Liparulo's dialogue is smooth and competent, and he throws in just enough twists to keep the pages turning.”

“Great characters and literate writing, a compulsive read. I loved it! Truly.”

“Prophecy and murder run roughshod through
Comes a Horseman
. From the mountain peaks of Colorado down to a labyrinth beneath Jerusalem, mystery and adventure abound in a read that will keep you up to the wee hours of the morning. Not to be missed!”

“Frightening and fiendishly smart,
Comes a Horseman
is a must-read! Robert Liparulo's intense thrill ride will keep your nerves frayed and your lights on.”

âDavid Morrell, author of
Creepers
and
The Brotherhood of the Rose

“
Comes a Horseman
is an ambitious and original debut thriller by a fine new writer. Robert Liparulo deserves an audience, because he has something meaningful to say.”

âC.J. Box, Anthony Award-winning author of
Out of Range

OTHER BOOKS BY ROBERT LIPARULO 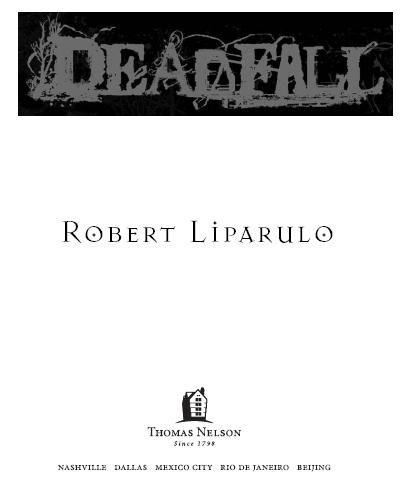 Thomas Nelson books may be purchased in bulk for educational, business, fund-raising, or sales promotional use. For information, please e-mail [email protected]

This is as much your story as mine.

If you are going through hell, keep on going.

A lifetime is a flash of lightning in the sky.

The most dangerous of enemies are the ones who hide
in plain sight.

When you are unsure of a man's character, look at
his friends.

The people trying to kill
Roland Emery quickly closed the distance behind him.

“Back off!” Roland yelled at his rearview mirror, where the big front grille of their truck loomed.

This rutted half-road was as familiar to him as the ever-increasing contours of his face. He knew every bump, every bend, every place where the trees stepped in closer to slash at your paint or, if you really were not paying attention, kick a dent in a side panel or door. Still, the newcomers stayed on him, falling back on the turns, then roaring forward when only rough terrain stood between them. Their truck was one of those big fancy jobs, those pseudo-military monsters that ate ruts and boulders like granola.

A jolting bump gave him a glimpse of his own face in the mirror: red-rimmed eyes, bulging in fear. One of his shaking hands came off the wheel, fluttered to his face, and wiped at the oily sweat on his brow.

What do they want?
he thought. No, no, no . . . That wasn't the question. The question was
why
? Why did they want to kill him?

Steering around each tight curve, he tried to get hold of his frenzied mind. What appeared to him, calming him, was his wife's face. Lizzie.What would happen to her if he died? Fine lady, tough as the wolverines they trapped together; but she always said what kept her going through the cold mornings checking traps and the long days guiding hunters into the hills was knowing Roland would be there at night to stoke the fire and fix a cup of
Nahapi
“sit down” tea just the way she liked it.

He pushed his lips together and cranked the wheel, taking the car down through a shallow stream and out the other side. He felt his panic pulling at him, trying to make him do something stupid. He squinted and forced Lizzie to fill that place in his mind instead of the terror.

He wished they had put some money aside so the old gal wouldn't have to work so hard by herself if these guys after him got their way. Thank heaven she wasn't with him now.

Oh yes, at least there was that.

She'd risen with him at five, as usual, but moving a little more slowly, with a little less spunk.

But he knew her. “Just a little tired” for Lizzie was “I'd better go see the doc” for most people. So he had insisted on checking the traps alone.

Which is what he had been doing when the big truck appeared, as bright yellow as a birthday balloon. He soon realized that the color had nothing to do with the owner's fun-loving disposition. Rather, it was ironic or sarcastic or one of those words that meant “you can't judge a fellow by the color of his car.”

Roland had been coming back from checking yet another empty trap when he'd spotted the truck. He'd left his old Subaru right on the rutted trail since travelers in these hilly woods were nearly unheard of this time of year. The big yellow truck had been farther up, as though returning from camping. But he had seen it parked in front of Ben Mear's B&B on his way out of town. Fiddler Falls was too small for visitors to go unnoticed, let alone a group with a fancy machine like that.

Sure enough, he'd seen where the vehicle's wheels had pushed down the grass and some saplings on its way around the Subaru.The driver must have realized there was nothing to see but more trees along that route and turned around. He had stopped fifty yards away, as though waiting for Roland.

A man and a girl had appeared to be standing in the bed of the truck, but straps crossed over their shoulders and chests, so they must have been sitting in chairs. The chairs positioned them high enough to see over the cab's roof. And that was just weird.