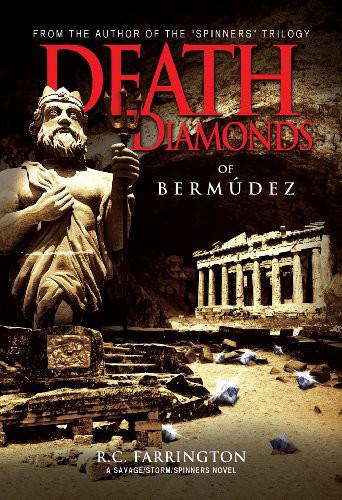 Wonderful People who contributed to this book:

Jason Farrington has created outstanding graphic designs for this novel.

Rod Ferguson of Bermuda and Pat Farrington of the United States have made contributions of their time and thoughts to help make this novel possible.

I would like to dedicate this novel to the past, present and future of Bermuda. The rich history of this island should be cherished and preserved forever. This is one of the few places on earth that you can step back into time and experience the past. Visit Tom Moore’s Jungle to experience Bermuda as the first inhabitants did, or step back into history one hundred fifty years ago with a visit to the Village of St. George’s.

Yes, even today there is an ongoing effort to maintain the natural beauty and the limited resources of the island, but Bermudians are committed to preserving their precious island.

The future is bright for Bermuda. Bermudians have embraced going green, and with the dedicated support of the Bermuda Government, this island will remain a pristine paradise in the Atlantic Ocean for centuries to come.

Bermuda is the most beautiful place on earth, and whoever reads this novel should take at least one week out of their busy lives to visit one of the most incredible places on the earth. There you will find soft pristine turquoise-colored waves gently rolling up on the pink beaches. You will also find breathtaking the myriad combinations of arbors, shrubs, vines and flowers that reflect all the colors of the rainbow. Then, when you consider the historic Forts, the village of St. George’s and the most picturesque golf courses in the world….. Yes, Bermuda is truly an island paradise.

Characters depicted in this novel other than known historical persons are all fictitious, comparisons to people living in the past or present is coincidental and not intentional.

The City of Mardi Gras

The City of the Dead

Clues from the Dead

The Heat is on

The Depths of Darkness

Every Which Way But Up

The Chase is on

The Tunnel of Death

Guardian of the Tunnel

Spinners to the Rescue

The Tower of Life

Rumble in the Jungle

Just another day in Paradise

The City of Mardi Gras

Special FBI agent Derrick Storm arrived back to his beloved city of New Orleans after months of round the clock undercover work. Storm’s travels had him on duty in Iraq, Bermuda, and New York. Just stepping off the airplane, Storm could smell the unique cuisine of New Orleans. As he rode through the city in a taxi he found it still depressing to see the aftermath of Katrina so long after the hurricane had struck. He could only hope that someday the city he loved would be returned to its former glory.

Storm can best be described as a dark skinned thirty-five year old, six feet one inch tall with a medium large build. He holds a black belt in karate, and he is one of the finest FBI agents in the country.

With his international terrorists assignment finally over, Storm was ready for a break. He would never forget his new found friend, Inspector Ian Savage, who had helped him foil the terrorists’ attempts to attack and kill thousands of people in New York City. He also would never forget that Savage had saved his life on several occasions. Ian Savage, one of the most respected inspectors on the Bermuda Police Force, was stationed at the St. George’s branch. Caucasian, six feet tall, medium build, and at forty-six very fit for his age with a past history of competing in the annual police boxing tournaments, Savage was definitely a man Storm would trust with his life.

Storm had arrived home just in time to partake in the festive Mardi Gras Parade. A week long party on Bourbon Street was just what Storm needed to unwind and relax. He was fortunate to own a three story flat in the heart of the French Quarter. Storm spent the afternoon relaxing to make sure he was well rested for the parade that night. Unfortunately he overslept and did not arrive at the parade route until well after the festivities were under way. Storm managed to squeeze his way through the crowd to the front where he could see the floats pass by and have a chance of catching the colorful beaded necklaces. Almost every float in the Mardi Gras parade had people dressed in elaborate costumes as they threw necklaces to the crowds to catch. For Storm the best part of the parade was catching the necklaces as they were thrown from the floats; although he never kept them. Instead he always gave them to kids after the parade was over. Most of these kids were too small to catch beaded necklaces for themselves.

After the parade was over, Storm ventured down to Bourbon Street to visit his favorite neighborhood bar. Bourbon Street was exceptionally crowded with festive party goers. Finally, Storm made his way into the bar and sat down in a small booth by the front window overlooking Bourbon Street. Storm enjoyed watching the people pass by while he nursed his draught beer. People partying on Bourbon Street, especially during Mardi Gras, will dress up in crazy costumes and do things they might not normally do. As the night wore on Storm noticed four men sitting in the booth behind him. Two things out of the ordinary caught his attention. First of all, they were dressed in some type of bush jackets and hats which had nothing to do with Mardi Gras. Secondly, they all spoke with an unusual accent. They were also using phrases and words he had heard while in Bermuda. However, they clearly were not Bermudian. Because of the loud celebration going on in the bar, Storm could only pick up pieces of their conservations.

These visitors were from South Africa, and they were not just any South Africans. They called themselves
‘Boers,’ descendants of early Dutch settlers in South Africa who had fought the British in two wars in the eighteen hundreds.
Although they eventually lost both wars they cost the British military thousands of casualties. The Boers had been immortalized by many of the old guard in South Africa. Storm would soon discover that these men were more evil than the Cobra terrorists he and Savage had eliminated in New York.

One of the men speaking was
Kruger Van Eck, the leader of this small group of new Boer renegades. Most of these men were ex-paramilitary officers from the old South African Apartheid Army or sons of ex-officers. These throwbacks were never going to be assimilated into the new South Africa where all men are equal. Van Eck had no delusion of overthrowing the South African Government, but he did have plans to annex areas of South Africa back to the Boers who lost them over one hundred years ago at the defeat of the British.

Van Eck, who was from a very wealthy family in South Africa that owned several diamond mines, was saying, “Men, our cause has led us to New Orleans. Here is where we will find the map that has eluded us for years”. Van Eck had recently discovered a lost letter from one of his long lost relatives, Fritz Duquesne. Duquesne had served in the Boer War and was captured by the British then shipped off to Bermuda for interment. The young Fritz Duquesne hated the British with a passion. He was so disruptive in prison that he was often assigned to be the grave digger for his fallen comrades in prison. This made Fritz hate his captors even more. While digging graves on Long Island, Fritz and several of his comrades had made a discovery that they had told no one about. Later on, most of Duquesne’s comrades who also knew the secret of Long Island were found murdered. Just before the Boer War ended Fritz was one of only a few prisoners who escaped the prison on Bermuda. He was never brought to justice for his escape and he never was able to return to Bermuda.

Fritz Duquesne was not through with the British. During World War I and II he acted as a German undercover agent, but was finally captured in the United States just before the close of World War II. After being released from a US prison in the nineteen fifties, Duquesne just faded away and died a broken man a few years later. Shortly before the end of his life he sent a map with the secrets of Long Island sewn into his old Boer military jacket to a fellow prisoner of the Boer war who lived in New Orleans. Koos de Klerk died a few years later in nineteen sixty one apparently taking this secret to the grave.

Van Eck’s family had been the recipient of a letter from Duquesne just before his death, but it had been lost for years. Kruger Van Eck had found the letter in the bottom of a cedar chest. Although Van Eck found it hard to believe the letter’s contents, it would be life changing for him and his henchmen. Finally, they had a chance to restore the Boer nation in a portion of South Africa. Van Eck’s big break came earlier last month when he was reading an Internet obituary on de Klerk. He had read that de Klerk had been buried wearing a military jacket which meant it had to be Duquesne’s military jacket. With this information Van Eck knew what needed to be done.

Van Eck continued, “We will find the map in one of the Cities of the Dead”.

One of his men spoke up saying, “What the bloody hell is the City of the Dead?”

Van Eck’s face turned red while he replied, “You idiot, it’s what they call cemeteries in New Orleans. Tomorrow night we will visit the grave that holds our secret.”

Interrogative 01: Tiago and the Masterless by Charles Barouch
Dark Blue: Color Me Lonely with Bonus Content by Carlson, Melody
Everybody Bugs Out by Leslie Margolis
SoulQuest by Percival Constantine
Rough and Ready by Sandra Hill
Hot Pursuit by Lorie O'Clare
One More Night with You by Lisa Marie Perry
Talking to the Dead by Harry Bingham
Highland Steel (Guardians of the Stone Book 2) by Crosby, Tanya Anne
Football Frenzy by Alex Ko
Our partner