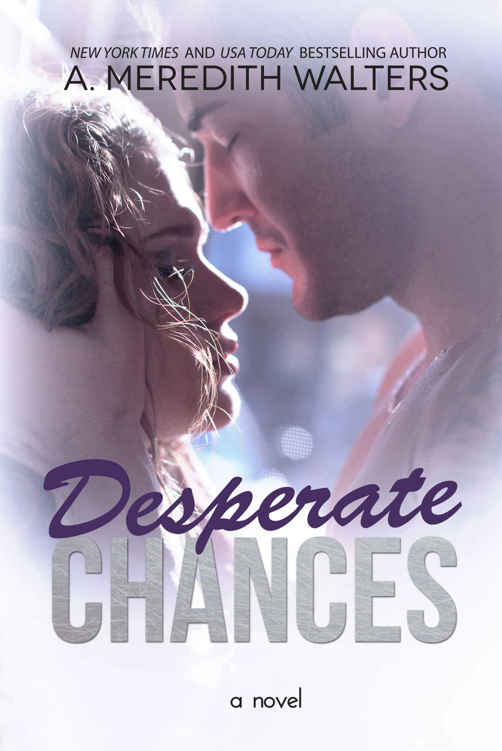 And love can turn into an enemy…

Mitch Abrams, the bassist for the popular rock band Generation Rejects, has been in love with Gracie Cook for years. But Gracie, a complicated girl with a lot of baggage, was too blind to see how she felt about the man who had always stood by her.

Until one night of passion brought them closer than they had ever been before.

Feeling off balance and out of control, Gracie does the only thing a girl with self-destructive tendencies can do: end things with Mitch before they can really begin.

So Mitch moves on. With his band, his friends, and a new girlfriend.

Yet he can’t seem to forget about the girl who threw his heart away.

Gracie, who is still struggling to build a life after crashing to the bottom, finds it hard to forget about her one night with Mitch. And even as she tries to convince herself it was only sex, her heart knows differently.

But life is full of chances and desperate moments. And when Mitch and Gracie are thrown back into each other’s lives, will they seize at the opportunity to do things right?

Or will the rock star and the less than ordinary girl crash and burn?

His voice was like hot chocolate slipping and sliding over my skin. I giggled nervously. Partly because I was slightly embarrassed and mostly over the top excited.

I had made sure to always keep that separation between friends and “more.”

I knew he wanted something else. I knew he loved me and I enjoyed the feeling of being wanted. It was nice. After all the shit I had dealt with in the past few years, I reveled in the way Mitch Abrams worshipped me.

But I wasn’t good with giving into temptation. It had landed me in rehab.

Yet, I couldn’t look away from his dark eyes. They were so intense. So needy.

“Yes,” I breathed, hardly able to believe what I was saying.

Mitch’s eyes widened in shock. Then they heated. They simmered. They boiled over.

“Close your eyes,” he commanded and I liked this suddenly domineering side to his otherwise affable personality.

I did as I was told.

“Lay down,” he instructed.

I giggled again, feeling lightheaded and overwhelmed. But I couldn’t blame it on being drunk. That wasn’t me anymore. I had given all that up.

No. I was just drunk on
him.

Maybe this wasn’t such a good idea…

“Oh my god!” I groaned as he ran his hand up the inside of my leg, moving my drenched panties to the side and teasing me with his finger.

“Do you have any idea how long I’ve wanted to see you like this, Gracie? Desperate only for me.” His voice hitched and I had to look away. The emotion on his face threatened to suffocate me.

My god, this was a mistake.

I felt suddenly panicked. I was lying on the bed, my pants around my ankles, with Mitch’s hand in my underwear.

One of my very best friends.

A man I swore I didn’t feel “that way” about.

I had always been really good at lying to myself.

I stiffened even as the pulsing waves of pleasure thrummed through my body. Mitch pushed his finger inside of me and I fought against the urge to arch my back just to get closer.

I reached down between my legs and grabbed a hold of his wrist, keeping him still.

“Wait a minute, Mitch. We need to think about this.” Was that me that sounded so breathless?

Mitch leaned down, his dark brown hair falling into his face, his eyes intense and warm. His finger was still inside me. I squirmed a little.

“Why did you come here tonight, Gracie?” he asked me, his voice soft.

He brought his other hand up to cup my face, his thumb running along the curve of my cheek. The sneaky bastard slipped another finger inside of me and I couldn’t help but groan. My body was a total traitor.

“I…uh…well…I just wanted to hang out,” I said in a rush as his hand started to move. My fingers still encircled his wrist but I wasn’t trying to stop him anymore.

Mitch gently kissed my mouth, his tongue teasing the seam of my lips. “Liar,” he murmured, kissing me harder. Urgently.

“Stop fighting what’s always been between us, Gracie. You want this.
I
want this. It’s meant to be.”

Was he right? Were we meant to be?

My head was so muddled. I wasn’t thinking straight. I mean, how could I with his fingers doing glorious things between my legs?

Mitch pulled out his fingers and then wrapped me in his arms, holding me as closely as he could. We were lying together on the hotel bed, nose to nose. Our legs tangled together. Breathing heavily.

“You’re not just my friend,” Mitch began, smoothing my hair back from my face. His brown eyes implored me to listen. To hear him out.

“Mitch—” I began, but he cut me off by kissing me again.

This was such a bad, bad idea…

He pulled back, his heart in his eyes.

“You’re not just my friend, damn it!” His voice cracked and broke, along with what was left of my resolve.

A tear slipped down his cheek and fell onto my skin. I was branded. Burned.

I was going to hurt him.

I didn’t trust myself not to.

I had one last chance to end this before it got out of control.

“I can’t be who you need me to be, Mitch.” I turned my face away, staring at the wall. I couldn’t look at him. It would be my undoing.

“I only need you to be exactly who you are, G. That’s all I’ve ever wanted,” Mitch whispered and I closed my eyes trying to stop the tears.

He knew how desperate I was to hear that. He
knew
how shattered I was. How I was hanging on by such a thin thread.

“Let me be what
you
need. Please,” Mitch pleaded.

And I was lost.

I had no will power.

It was a failing of mine. I could never say no to the thing that could destroy me.

So I took off my best friend’s clothes.

I kissed him as fervently as he kissed me.

And in the morning, I left before Mitch woke up.

I had ruined everything.

“Y
ou’re too thin, Grace. Have you lost more weight? I thought you were working on your food issues,” my mother scolded, putting down a plate in front of me. I sipped on my coffee so I didn’t scream. Dealing with my mother took a special form of self-control that I had mastered in the last year and a half.

“I’m eating, Mom. Three regular meals a day. I promise,” I said tiredly, feeling the telltale signs of a migraine in the center of my forehead.

A migraine that was spelled M-O-M.

My mother smoothed her hair, the same shade of blonde as my own, and repositioned her silk blouse. She was a relentless primper, particularly when she was feeling annoyed, or being annoying, it really didn’t matter.