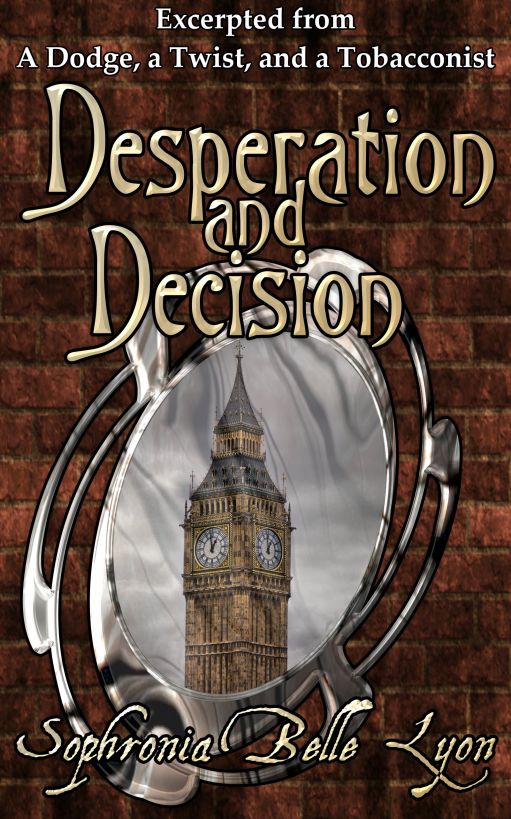 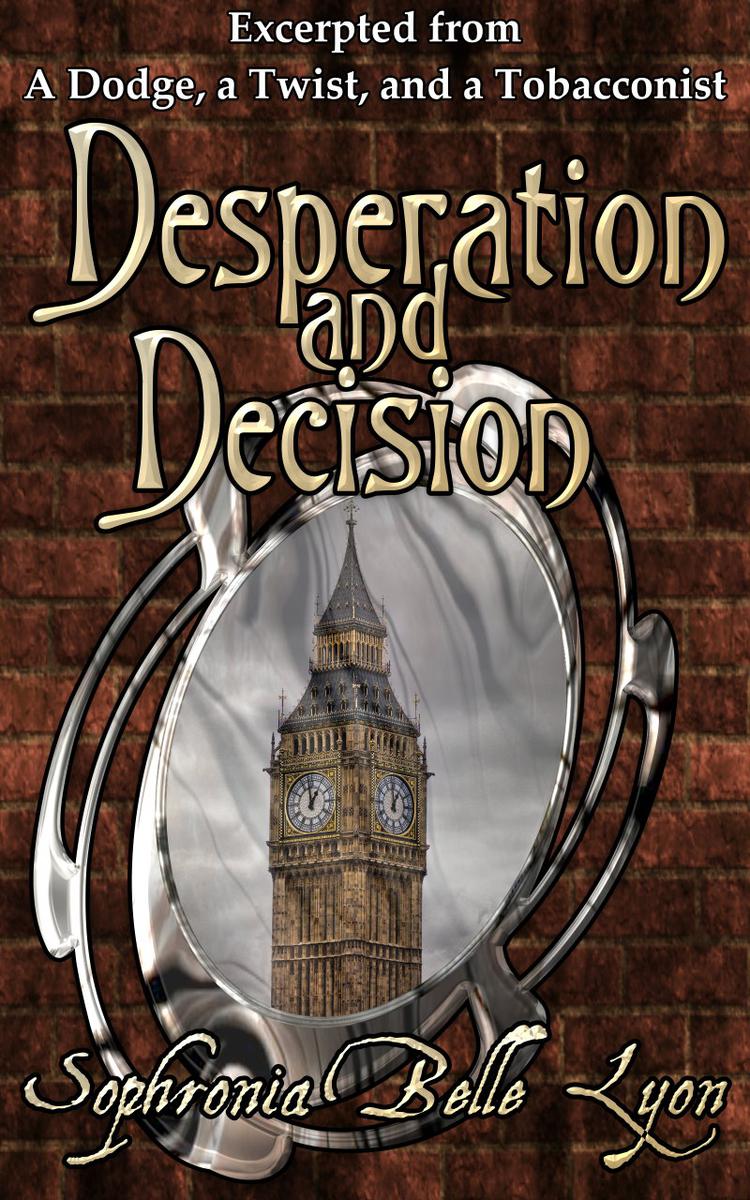 An Excerpt from The
Alexander Legacy Book One: A Dodge, a Twist, and a
Tobacconist

Desperation and Decision: An Excerpt from The
Alexander Legacy Book One: A Dodge, a Twist, and a Tobacconist

No part of this publication may be reproduced
in whole or in part, or stored in any retrieval system, or
transmitted in any form by any means, electronic, mechanical,
photocopying, recording, or otherwise, without written permission
of the publisher. Exception is made for short excerpts used in
reviews.

"Speaking the truth in love."

This book is a work of fiction. Any
resemblance of characters to persons living or dead is
coincidental

Scripture references are from The Holy Bible:
The King James Version, public domain.

The sign outside what appeared to be an
ordinary, even rather small, London shop read simply,
"Tobacconist." The tiny establishment did a trickling trade and its
patrons came and went as patrons of small shops usually did. On
certain days and at certain times, however, certain patrons seemed
to linger in the shop an unusually long time. The general public
wondered about me, the quaint foreigner who ran the shop, but
admitted they knew no harm of me. I was considered neat, even a
little bit of a dandy, taking walks about town with a gaudy crested
ring and a brocaded red satin waistcoat beneath my tidy, if
slightly out of fashion black suit. Women said they thought me
rather handsome and exceedingly polite and gallant. Men gave me
little or no thought unless they had business at the tobacco
shop.

Today was one of those days when certain
patrons had cause to linger. I opened a door in the back of the
shop and those certain patrons passed through into the Bohemian
Club. I had painstakingly managed to acquire presentable furniture,
comfortable chairs, a few tables for card-playing, and a small but
respectable liquor cabinet. The best of my stock of tobacco was
kept back here in a vault that raised and lowered by clockwork and
steam from the cool recesses of the cellar. This bronze humidor
kept the tobacco perfectly preserved.

My patrons sampled more of my atmosphere than
of my tobacco, liquor, or my cards, or they did not return a second
time to my club. I grouped my chairs and other furnishings
carefully. Those who wished a quiet place for reading the papers
were not troubled by those who gathered by the hearth to chat.
Those who desired a gentlemanly game of cards did not discompose
those who simply wanted to think and enjoy a peaceful smoke.

Today I reclined against the mantle and
listened to the talk. It was easy and pleasant at first and I was
lulled into a half-doze until a voice started to elevate subtly in
volume. Someone was telling a war story and I came alert to listen.
For ten full minutes I fixed my attention on this guest of a
regular member and his tale of daring do. Then I interrupted
him.

"You are a guest," I said. "I make allowances
for mistakes made by guests of the members, unless they breach the
bounds of propriety, sir."

"But you have, sir. Your tale is about
yourself. It is not permitted that guests exalt themselves in my
establishment. You may regale us with heroics but they cannot be
your own. I waited to see if the one who invited you would recall
his duty but he has not. So I ask you both to leave and not
return."

"Bosh!" exclaimed the member. "It was a great
yarn, Florrie! You'll not seriously bar me permanently, will
you?"

"Indeed, I will, because I can," I responded.
"For ten years of my life I listened to the boasts of a man and
could not discern that his boasting marked him as a liar and a
selfish, cruel brute. So I paint all boasters with that brush, and
banish them from my presence. But before you gentlemen depart, let
me tell you a 'great yarn,' and a true one, featuring a true
hero."

When I had finished telling them the story of
a lost and hunted prince spirited out of his country by a noble
friend, they had no words except that every man jack hurried the
braggart and the former member on their way out of the club
room.

Afterward Trevor arrived and the room gave
him a standing ovation, for it was not the first time I had made
the company aware of what my friend had done for me. Trevor blushed
and stammered as always before folding his lanky frame into a chair
and accepting one of my best Cubans and a brandy. Never did Trevor
pay for a thing he consumed in my shop or my club.

Nor ever would he.

"Say, do you repair pipes?" Clearly this was
American. He was also the tallest, awkwardest man who had ever set
foot in my shop. He pulled down a pair of blue leather goggles and
revealed brilliant but clearly near-sighted blue eyes. His beard
and hair were cornsilk yellow, somewhat darker than Trevor's, but
his tall frame and that familiar coloring created an odd attraction
in me for the stranger. He juggled a very fine old amber and
rosewood pipe and almost compounded the small crack in the bowl as
it spurted out of his long fingers onto my counter. Happily I
caught it and prevented further damage.

"I can easily mend this, sir, but are you
certain you would not prefer a new one?" I waved at the good
assortment I had on display. He followed my hand motion a little
absent-mindedly but then snapped back to look straight into my
eyes.

"Just got this one broke in," he said
laconically and gave me a lopsided grin, adjusting a pair of thick
gold-rimmed spectacles into place and peering at me for a long
moment. "You like my pipe and you want it for yourself, don't
you?"

It was my turn to smile. "It is a very fine
pipe," I admitted. "I have not seen finer. I have a small personal
collection. I have not before today found a rosewood and amber I so
much desired to add to it. What will you take for it?"

"I wouldn't take gold for that pipe," the
fellow retorted, and I would have thought him rude if I had not
already begun to like him so well. "You see this crooked tooth?" He
proceeded to show me and I politely pretended to look. "I just got
the pipe worn to the point where it fits that spot just so. Not for
ready money would I part with that pipe. How long will it take you
to repair it?"

"I can have it ready by three o'clock today,"
I responded.

"Good. I must endure a whole evening's
singing by a dear friend of my wife's tonight. I'll need a pipe
badly when the Phoebe-Bird's done tweeting and I can go quietly
back to the hotel."

He looked as if he meant to leap across the
counter and hug me. I took a step backward and he laughed, a great
honest laugh that made me laugh as well.

"I confess I have not the means to attend
live concerts, sir," I admitted. Any money I earned went straight
into stock or the club fittings.

"She could sell recordings, now couldn't
she?" The man mused in his eccentric way. "Wonder why Archie hasn't
thought of that one?" He gave me a narrow look. "Then I s'pose
you've not heard of the celebrated composer and poet Alexander
Mackenzie Campbell either, who is condemned to appear at that same
closing concert? He must sit through the entire evening because he
was fool enough to write one idiotic song she insists on closing
every show with."

I suppressed a smile. "I cannot say that I
have, sir," I responded soberly, though I was beginning to think
that, just perhaps, I now had heard of that longsuffering poet.

"God bless you for that, sir. I shall return
for my pipe at three promptly, and in the meantime shall miss it
sorely." He gave it a last fond caress and shambled out of the
shop. I caught a glimpse of an enchanting lady, tiny and clad in
royal blue. She was golden-haired and led three small children up
to the gawky American outside the shop. She stretched up on tiptoe
with clear blue eyes fixed on the homely giant as he leaned down.
In front of all London she unashamedly kissed him.

I was just closing up the shop for the
evening, only a little disappointed that a servant had come to pick
up and pay for the rosewood and amber pipe. As I checked the lock
on the front door an old-fashioned mail coach pulled up in front.
Something struck me as very odd about it, though I couldn't at
first say what. London was a noisy city, but I realized this great
coach and six had come up behind me without a sound. The driver
hopped down from the box. He was a slim, wiry fellow with flaming
red hair sticking out at all angles beneath a small scuffed brown
bowler. His face was narrow and came almost to a point with his
turned-up nose. Black, beady eyes swept over me and he slapped a
whip trailing a foxtail from the handle against his over-the-knee
spats. His clothing was a curious mix of equally scuffed olive and
brown leather. A pair of leather and brass goggles dangled from his
neck.

One Step Behind by Henning Mankell
Cowboy Redeemed by Parker Kincade
Wonder Guy by Stone, Naomi
Highlander's Challenge by Jo Barrett
Sweetest Kill by S.B. Alexander
When Wishes Collide by Barbara Freethy
Drop Dead Perfect (An Ellen Harper Psycho-Thriller) by Murcer, Rick
Hold on to Me by Elisabeth Naughton
Death by Killer Mop Doll (An Anastasia Pollack Crafting Mystery) by Lois Winston
No, Not that Jane Austen by Marilyn Grey
Our partner