Did Muhammad Exist?: An Inquiry into Islam's Obscure Origins 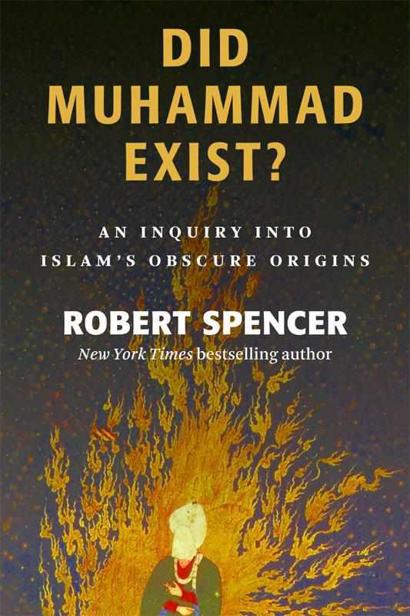 An Inquiry into Islam's Obscure Origins

All rights reserved. No part of this publication may be reproduced or transmitted in any form or by any means, electronic or mechanical, including photocopy, or any information storage and retrieval system now known or to be invented, without permission in writing from the publisher, except by a reviewer who wishes to quote brief passages in connection with a review written for inclusion in a magazine, newspaper, or broadcast.

The images on pages
43
and
46
are © Dumbarton Oaks, Byzantine Collection, Washington, DC, and are reprinted with permission from Dumbarton Oaks. The images on page
44
originally appeared in Karl-Heinz Ohlig and Gerd-R. Puin, eds.,
Die dunklen Anfänge
(Berlin: Verlag Hans Schiler, 2005), and are reprinted with permission from Verlag Hans Schiler and Volker Popp.

Did Muhammad exist? : an inquiry into Islam's obscure origins / by Robert Spencer.

Published in the United States by:

Note:
No system of transliteration for Arabic words and names is entirely satisfactory. English simply is not equipped to render the subtleties of the Arabic alphabet. I have systematized the spelling in the quotations for the ease of the reader and have generally eliminated the apostrophes that stand in English texts for various elements of the Arabic alphabet, except where words are in common use, such as
Qur'an
, and where the result of the removal of such marks is unfortunate in English, such as
Sad
rather than
Sa'd.

Muhammad and His Family, according to Islamic Tradition

Introduction    The Full Light of History?

Chapter 4        Switching On the Full Light of History

Chapter 5        The Embarrassment of Muhammad

M
uhammad, the prophet of Islam, is strongly present in the minds of millions of Muslims. This makes it difficult to imagine that he may not have been an actual person—as real as Richard Nixon.

Muslims have a strong and vivid memory of the founder of the religious movement we now know as Islam. This memory appears to be so strong and so vivid that even academic professionals whose daily duties include weighing the evidence for and against Muhammad's historicity must have days in which they think that their intellectual pursuits make no sense.

It is indeed tempting to believe that Muhammad existed in the same way our forefathers did, if only because he is fully alive in the mind of his followers. But a closer look at the historical evidence may soon make the skeptic envious of all those who believe Muhammad really existed. It must be a blessing indeed to be able to believe there are no problems with Muhammad's historicity.

Logicians have repeatedly argued that nonexistence cannot be proved. When the British philosopher Bertrand Russell once suggested that there was no rhinoceros in the lecture room, his young Austrian pupil Ludwig Wittgenstein started to look under the desks, chairs, and tables. He was not convinced. The lesson of the story is a simple one: To offer proof of existence may sometimes be difficult, but to prove nonexistence is simply impossible.

Nevertheless, it is reasonable to have doubts about Muhammad's historicity. To begin, there are no convincing archaeological traces that confirm the traditional story of Muhammad and early Islam. The scholars and scribes of Islam know an awful lot about the religion's early decades—but what they recount finds no confirmation in physical remains of any kind from the period and places concerned. What they know is limited to stories, and to the same stories retold.

Like the stories themselves, the background against which the stories of Muhammad's career are set lack outside confirmation. We do not know much about the general circumstances in seventh-century Arabia, but the picture that the Islamic tradition offers is not confirmed by what we do know. In fact, archaeological findings occasionally contradict the traditional Islamic picture. Inscriptions, for example, suggest that the ancient Arabs were not pagans, as Islam teaches, but rather monotheists who believed in one God, the Creator of heaven and earth.

Only more archaeological work in present-day Arabia and Greater Syria can possibly solve the dilemmas that have arisen concerning the historicity of Muhammad, but the rulers of these territories probably will not permit scholarly research that might eventually contradict what those in power see as religious truth. And if the outcome of the research is determined beforehand by religious necessities, scholars will not be interested in the results.

An Iraqi scholar, Ibn Ishaq (c. 760), wrote a book that is the basis of all biographies of Muhammad. No biographical sketches of Muhammad exist that do not depend on Ibn Ishaq. If an analysis of Ibn Ishaq's book establishes that for whatever reason it cannot be seen as a historical source, all knowledge we possess about Muhammad evaporates. When Ibn Ishaq's much-quoted and popular book turns out to be nothing but pious fiction, we will have to accept that it is not likely we will ever discover the truth about Muhammad.

Next to Ibn Ishaq, the Qur'an itself looks like reasonably reliable testimony about Muhammad and his career. But we run into trouble when we want to reconstruct Muhammad's life and teachings from
the Qur'an, for the book as we know it today may not be an authentic reproduction of an Arabic text dictated to Muhammad in the early seventh century. There are reasons to believe that the Qur'an took its present shape not in the seventh century but later or even much later. The Arabic alphabet in which the Qur'an is written did not yet exist in the early seventh century, so it is improbable that Muhammad's secretaries, if brought back to life, would be able to recognize a modern edition of the Qur'an as part of the holy text that was dictated to them in fragments during Muhammad's lifetime—that is, if such dictation occurred.

The collections of Islamic traditions known as the Hadith form the third source from which Muhammad's life may be reconstructed. The Hadith are actually not one source but rather a group of sources, of unequal quality. Some of the traditions are unreliable even according to Muslim scholarly opinion. Muslim scribes and scholars accuse some of the transmitters of this material of fabricating their stories. It is perfectly possible to fabricate stories about real persons (see any newspaper, or Facebook), but to form a picture of the life of someone as eminent as Muhammad, one would rather not make use of stories that may have been fabricated.

To find out the truth about Richard Nixon was difficult, and it would have been impossible without the tapes. In the case of Muhammad, there are no tapes. There is not much at all. There actually is so little that the gravest suspicions are justified.

Johannes J. G. Jansen
served as Houtsma Professor for Contemporary Islamic Thought at the University of Utrecht (Netherlands) until his retirement in 2008. He is the author of several books, including
The Dual Nature of Islamic Fundamentalism
and
The Interpretation of the Koran in Modern Egypt,
and he has translated the Qur'an into Dutch.

In this chronology, incidents that rest on less than firm historical ground than is ordinarily assumed are marked in italics.

610:
Muhammad receives his first revelation of the Qur'an from Allah, through the angel Gabriel

632:
December: Battle of Yamama, death of many who had memorized portions of the Qur'an; according to Islamic tradition, this was the impetus for the first collection of the Qur'an

636–637: Arabian conquest of Syria and Palestine

Late 630s: Christian document is published that mentions an unnamed and still-living Arabian prophet “armed with a sword”

639: Arabian conquest of Armenia and Egypt

Early 640s: Thomas, a Christian priest, mentions a battle between the Byzantines and the
“tayyaye d-Mhmt”
east of Gaza in 634

640s–650s: Coin in Palestine bears the inscription “Muhammad” but depicts a figure holding a cross

651: Muawiya, governor of Syria, writes to the Byzantine emperor Constantine calling on him to renounce Jesus and worship the God of Abraham

653:
Uthman collects the Qur'an, standardizes its text, has variants burned, and distributes his version to all the Islamic provinces

Cats in the Belfry by Doreen Tovey
Classified as Murder by James, Miranda
The Girl in the Ice: A gripping serial killer thriller (Detective Erika Foster crime thriller novel Book 1) by Robert Bryndza
A Cost-Benefit Analysis of the Proposed Trade-Offs for the Overhaul of the Barricade by John Chu
Family Life by Akhil Sharma
Return From the Inferno by Mack Maloney
Clockwork Tangerine by Rhys Ford
Blood Kin by M.J. Scott
Finding Dell by Kate Dierkes
The Witch of Exmoor by Margaret Drabble
Our partner