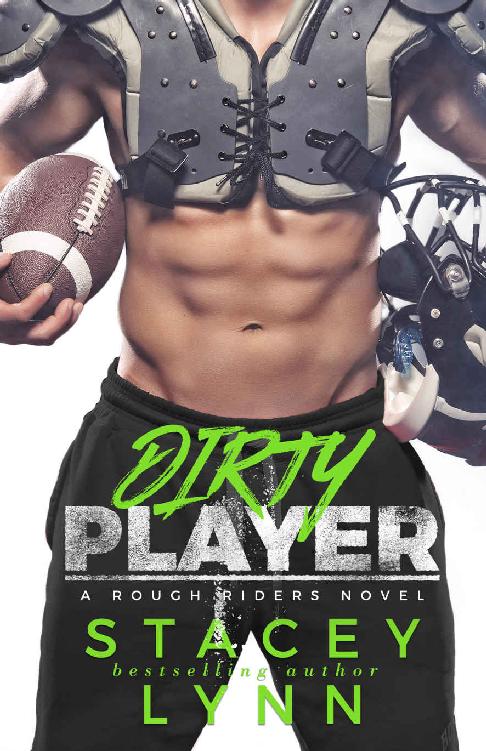 All Rights Reserved. This book may not be reproduced, scanned, or distributed in any printed or electronic form without permissions from the author, except for using small quotes for book review quotations. All characters and storylines are the property of the author. The characters, events and places portrayed in this book are fictitious. Any similarity to real persons, living or dead, is coincidental and not intended by the author.

I slid my fingers through my hair, smoothing back the wavy tendrils that had escaped my ponytail. The sun beat down on me, the glare so bright through my sunglasses I had to squint to see him.

He stood at the fence and signed autograph after autograph. Fathers with their sons and daughters boosted onto their shoulders. Women in shirts twisted up and tied between their breasts, baring almost every asset they had—and not because of the late summer heat.

I couldn’t wipe the smile off my face.

My brother. He’d done it. Drafted right after college, he’d spent the last three years playing backup quarterback, but last year, as the Vikings played the final few games of the season and their starter got hurt, Beaux had been put into the game.

He hadn’t just delivered when the team needed him to—he’d kicked ass.

I had shouted so loud my voice was hoarse for a week afterward.

After the season ended, he’d been traded.

Now, he was the new starting quarterback for the Raleigh Rough Riders. The fans packing the stadium at their last day of Summer Training Camp hooted and hollered all afternoon every time he made a great play. Beaux Hale was projected to be their savior, to pull the team that ranked in the middle of the pack for the NFL into the top team.

I’d been hearing whispers of “Super Bowl-bound” all afternoon while I sat in the stands, close enough to overhear conversations but removed enough to not have to talk to anyone. The tips of my fingernails were now ragged—not that it was uncommon.

I had spent years and hours and uncountable minutes dragging him to football practices while our mom worked three jobs to put food on the table before she became too ill to work. I had been the one to drive him to practice and toss the ball around with him in our tiny backyard. I’d taken him shopping for his shoes and helmets and pads at secondhand sporting goods stores. I’d taken on summer jobs to pay his registration fees. Then I’d stayed home and gone to community college before commuting the last two years to finish my degree, so I could stay home and take care of Beaux and my mom when her illness prevented her from working. I’d foregone most of my teenage years and early twenties in order to be the caretaker for my family. Now, at twenty-eight years old, I was finally seeing my brother accomplish the dream he’d had his entire life.

I didn’t regret a single second of my sacrifice.

Football had been in Beaux’s blood since the moment he could walk at ten months. He picked up a football, toddled around our small living room, and never set it down. He kept it in his lap at mealtimes and cradled in his arms at bedtime. At five, he’d declared he was going to be on TV someday, playing as quarterback. It was all he’d talked about. All he’d craved.

I’d craved seeing someone in my family finally succeed at something for once. It might as well have been Beaux.

He was the best of us, anyway. He was determined on the field, full of hard work and focus, but able to flip a switch to party-master and carefree in the blink of an eye. I’d be jealous of his ability to turn off the responsibility he carried if I didn’t love the twerp so damn much.

My fingers curled around the burning metal railing and I pulled them back, blowing on them to dull the pain while I walked down the stairs.

My cheeks hurt from the stretch of a smile that refused to dissipate as fan after fan thrust their breasts and pens and paper into Beaux’s hand.

Only I knew that his pink-tipped ears weren’t from excess sun but from embarrassment. As much as he loved the game, the attention still flustered him.

He wanted to pass a ball into outstretched, waiting hands. He wanted to break through the pocket and run for his own first down. He wanted a handoff that caused the stadium to roar so loud the field trembled beneath his cleats. The fans and the notoriety were things he claimed he never got used to.

“Oh my God,” I drawled as I walked closer to him. I pressed my hand to my chest as if my heart was fluttering at a runaway speed. “Beaux Hale…”

My fake drawl, one I’d been trying to master for weeks when I finally agreed to move to be closer to Beaux, made him cringe.

“It’s Beaux Hale,” I repeated on a loud whisper to the woman in front of me. She was around his age, and hope flared in her eyes like dollar signs. “Can you believe it? He’s so dreamy.”

“He’s been in my dreams every night,” she replied, giving me a cheeky grin. “Now if I could just make that a reality.”

Her gaze quickly scanned my body and her shiny red lips turned to a pout as she took in my breasts, well concealed behind a thin tank top, and cut-off and frayed denim shorts that showed off my shapely backside and tanned legs.

I pressed my lips together to keep from laughing that she could possibly think I’d be competition for her.

Never once had Beaux fallen for a fan. He brushed off the attention like he brushed his hair—cleanly and with purpose.

“Good luck,” I replied, right as Beaux shot me a grin before turning his attention toward her.

As she gushed over the size of his biceps and his fifty-yard pass, my eyes wandered to the row of players on Beaux’s side of the fence.

They were all grinning, their smiles so firmly affixed I doubted many fans noticed most of the smiles were fake. Sweat dripped down their necks, soaking into the pads they still wore from camp.

Today was the last day. Preseason games started next Thursday. Just over one week until Beaux made his debut as a starting quarterback for the NFL.

The thrill of excitement rolled down my spine until my little brother reached out and pulled me to him.

“You fucking made it,” he whispered. His large, meaty hand clasped around my neck and held me to his shoulder. At twenty-five, he was three years younger than me. Almost a foot taller at six-five and more than a hundred extra pounds, he was no longer my little brother.

He was a monster. And a machine.

And I freaking adored him.

“I did. Saw you play today—you were great.”

“My short game was slow and felt too forced.” He frowned when he pulled back.

Only I would catch the worry in his dark blue eyes.

The worry evaporated and softened. His fingers flexed on my neck. He said more without words than he ever could have with them, but he still tried. “I couldn’t have done any of this shit without you.”

He would have. The game was so ingrained into his DNA from the moment he was born that he would have found a way.

I just helped make it easier for him.

“You promised if I came out here you wouldn’t make me cry.”

I pushed at his shoulder only to have my hand slide off him and brush against another mountain of well-formed, toned, and tanned muscle I knew was hidden beneath shoulder pads.

I looked toward the new, masculine voice. It was unavoidable. The voice instantly brought up visions of morning sex and shower sex, public sex, and sheet-clawing, multiple-orgasm, ecstatically screaming sex.

My breath hitched as Beaux pulled me closer to the fence.

Powell was the best tight end in the league for the last six years. Five pro-bowl games. A handful of MVPs. He had awards and decorations and trophies and recognition. He had a body that drove women to distraction.

He had a voice that would make a nun drop to her knees and pray for forgiveness for her sinful thoughts.

A body that’d been plastered on every magazine cover, not always clothed.

Full lips that made you want to lean into him for a taste.

“Look at you,” he drawled again, his hand coming down and clasping onto Beaux’s shoulder. “One week at camp and you’ve already found some pussy.”

…And an attitude of the biggest asshole around.

He was surly and crass. He’d been fined for refusing to give interviews, or when he did give them, he gave one-word answers. Yeah, Oliver Powell had an ass that fit his position on the field, but he was a complete prick.

I stiffened and pulled back from Beaux.

He only held me tighter, glaring at Powell. “Knock it off.”

“You move in between the sheets like you move on the field, and I bet this girl’s going to be screaming your name before you make it to the parking lot.”

Beaux’s rage started bubbling beneath the surface. He was younger, but that didn’t mean he wasn’t protective. His size had always made him feel like he needed to be my bodyguard.

If I didn’t want to puke from the vileness of Powell’s thoughts, not to mention he was talking about my brother…I would have said something.

Beaux beat me to it. “Don’t be a fucking asshole right now, Powell. Save your shit talk for the locker room.”

Oliver ignored the threat and kept his eyes focused on me, his gaze sweeping down my body in a leering but appreciative graze. “Wanna share? Some of these women like it. You’ll see. Now that you’re on the field and not warming the bench, you’ll snap your fingers and get whatever you want.”

Beaux leaned into him, his hand dropping from my neck. He twisted his head at the last second and whatever he whispered in Powell’s ear was unheard and unseen.

As he spoke, Powell’s face went blank. When Beaux stepped back, fire shot from his dark blue eyes.

I grinned and waved my fingers.