Read Doctor Who BBCN10 - The Nightmare of Black Island Online

Doctor Who BBCN10 - The Nightmare of Black Island 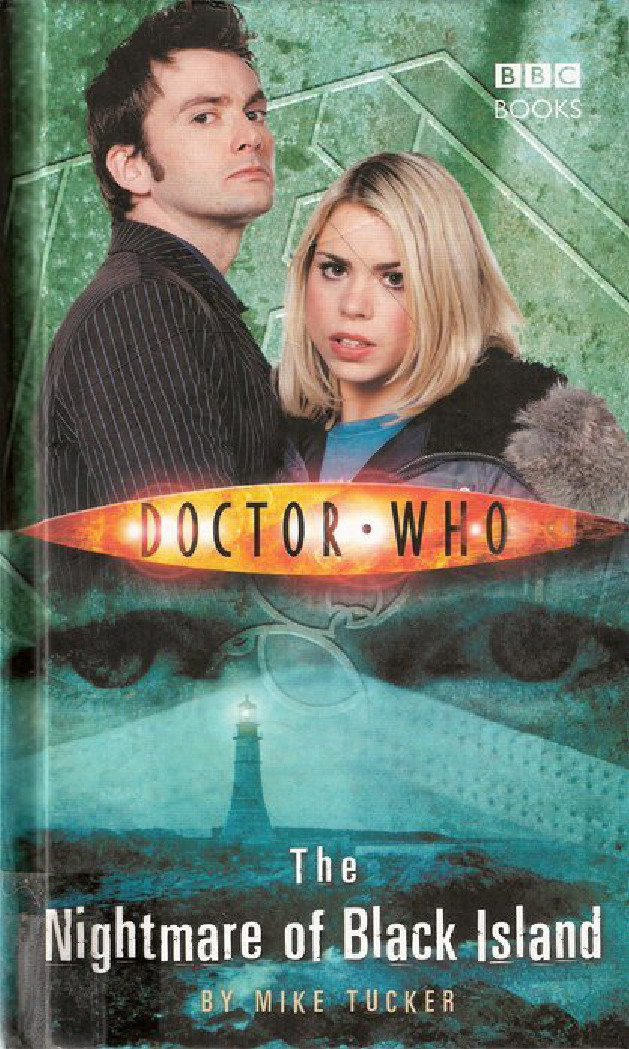 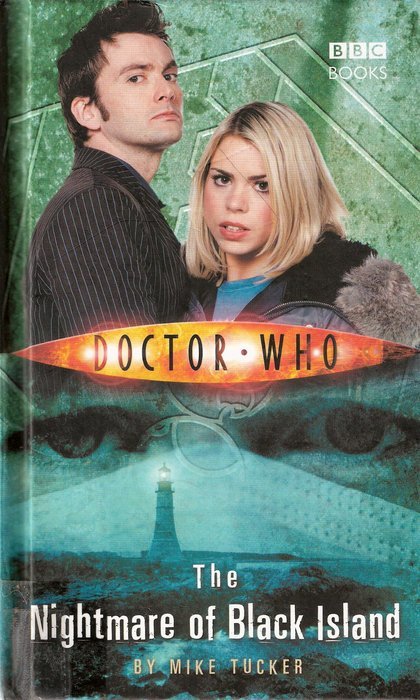 On a lonely stretch of Welsh coastline a fisherman is killed by a hideous creature from beneath the waves. When the Doctor and Rose arrive, they discover a village where the children are plagued by nightmares, and the nights are ruled by monsters. The villagers suspect that ailing industrialist Nathanial Morton is to blame, but the Doctor has suspicions of his own.

Who are the ancient figures that sleep in the old priory? And what is the light that glows in the disused lighthouse on Black Island?

As the children’s nightmares get worse, the Doctor and Rose discover an alien plot to resurrect an ancient evil. . .

Featuring the Doctor and Rose as played by David Tennant and Billie
Piper in the hit series from BBC Television.

The Nightmare of Black Island

The first clap of thunder echoed off the cliff face like cannon fire, sending gulls shrieking into the dark, brooding sky. Out across the waves a bright fork of lightning lit up the purple clouds on the horizon and, with another ominous rumble of thunder, the rain swept in from the sea.

Carl Jenkins looked up in despair and struggled with the hood of his jacket as a sharp gust of wind swirled the rain around him. He glowered angrily at the sky as the rain became a torrent, and cursed his luck.

The weather had been against him almost as soon as he set out on this holiday. When he left his flat in Bristol the sun had been shining and his spirits had been high. He should have known that his fortunes were going to change as soon as he saw the boiling clouds on the other side of the Severn Bridge. It was typical. Every trip he made into Wales was the same. Paying the toll was like putting coins into a launderette washing machine: no sooner had they clunked into the slot than the water started to pour.

The brochure advertising holidays in west Wales that had fallen out of his local newspaper had seemed ideal. The photographs of the bays and cliff tops looked idyllic, but it had been a paragraph about the fishing that had finally convinced Carl to pick up the phone and book.

His father had been a great fisherman. Old family holidays had always started with a regular routine of unpacking long canvas bags 1

from the attic, checking rods and reels, sprucing up floats. The entire exercise fascinated Carl and there had always been that extra thrill of danger when his father untied the small pouch filled with gleaming hooks, pointing out sternly that they were not to be touched under any circumstances.

Not that he would have gone anywhere near them. The wicked barbs on the tips had terrified him and he had always curled his hands into fists so that there was no chance one of those metal spikes could get near his fingers.

Carl had spent a pleasant couple of hours pulling his father’s rods and bags from the attic and checking that everything was in working order. It came as some surprise to find that the bag of hooks still sent a familiar chill down his spine, and he found himself smiling at how stupid childhood memories continued to have such a strong influence.

Ynys Du had seemed like an ideal spot. The village was small and pretty with a couple of decent pubs, the campsite was only a few minutes’ walk from the centre and the brochure had pointed out several good spots for fishing along the coast. There was even a disused lighthouse on the island out in the bay – a ragged lump of black rock that explained the name of the village – and the photographs in the brochure had given the entire area a picture-postcard feel.

The truth was that now, under the dark and brooding sky that had loomed low overhead ever since his arrival, the village had a completely different feel. The long, tangled line of rocks along the coast that looked so pretty in the sunlight had taken on a harsh, jagged feel, the waves boiling angrily along their edge sending spray high into the air. On top of all that, the campsite was deserted, his little orange tent the only one. He hadn’t even been able to get hold of the site owner.

Carl shivered inside his jacket. The rain was icy cold and the wind was starting to cut right through him. He glanced back along the coast at the village. As the rain soaked into the stone of the buildings, the entire village seemed to darken and solidify, becoming cold and unfriendly. Another loud crack of thunder made him jump. It suddenly seemed like a very long walk back to the relative comfort of his tent, and he was aware of how treacherous the paths along the cliffs were 2

becoming as they started to stream with water.

With a deep sigh, he started to reel in his line, wincing as lightning arced across the waves. The lighthouse that had been so picturesque in the brochure now stood out like a dark, ominous spire in the water, the black rocks at its base flecked with foam from the raging ocean.

A sudden flare of pale light made Carl glance up, puzzled. That hadn’t been lightning. He brushed away the stray strands of hair that had matted themselves across his face and peered through the lashing rain at the looming shape of the island in the bay. Surely that flash had come from the lighthouse. . .

As he struggled to see through the rainwater stinging his face, another faint pulse of light lit up the clouds. It had come from the lighthouse! He could see a faint flicker of sickly green-grey light from the lamp room. He frowned. The lighthouse was meant to be deserted; it was a relic from the days when Ynys Du had been a busy mining community and ships had had to pick their way through the treacherous sandbanks that lay just off the coast. According to the guidebook, it hadn’t been used since the 1970s.

He reached for one of the canvas bags at his side. His binoculars were tucked into a leather case in there, packed with the fishing gear in case there was an opportunity for bird-watching. Shaking the rain from his eyes, Carl groped around in the sodden bag. He gave a sudden cry as he felt a searing pain.

He whipped his hand back from the bag, tears of agony welling in his eyes, struggling not to let the rod clatter down the rocks and into the swirling sea. Blood streamed down his hand, diluted by the lashing rain, and he could see the gleaming end of one of the fishhooks protruding through the tip of his thumb.

Stumbling to his feet, Carl tried to wedge the rod under his arm, turning his back to the wind and pulling at the hook. He felt sick and dizzy. All the nightmares about fishhooks that he had had as a kid suddenly threatened to overwhelm him. The hook was buried quite deep and there was no way he was going to be able to just pull it free without tearing out a good portion of his flesh with it.

His stomach heaved and for a moment he thought he might faint.

He tried to slow his breathing. He was being stupid. It was just a fishhook, for God’s sake. He was a grown man, not a frightened kid.

He had a pair of pliers back in the car. All he had to do was snip off the barb and the rest of the hook would slide out easily. The cold was already numbing his hand, dulling the pain. He tried to wipe the blood from his palm, fumbling in his pocket for a handkerchief.

Then two things happened at once: a child’s laughter, shockingly close, made him stumble back in alarm, and at the same time the rod jerked in his arms, bending sharply as something heavy hauled on the line. Carl struggled to keep his footing on the rain-slick grass as the tug on the rod became an insistent pressure, the reel spinning uncontrollably. The laughter came again and a tiny shape appeared out of the rain. A small child, a young boy no more than five years old, dressed in flannel pyjamas and clutching a bedraggled soft toy, stared at him through the downpour, seemingly unaware of the biting wind. The boy raised a pale hand, pointed at Carl and giggled, the wind swirling the sound eerily across the cliff tops.

Carl felt a sudden chill of fear as he realised that the child wasn’t pointing at him but past him, at something in the water. The line continued to unwind wildly, the noise from the reel now a high-pitched scream. As Carl started to turn, the rod was wrenched violently from his grip, sending him sprawling.

With a guttural, bubbling roar, something vast and glistening emerged from the raging ocean. Carl stared in disbelief as the thing clawed its way up the rocks, waves breaking on its broad back. It was huge, well over two metres tall, its skin a mass of barnacle-covered heavy plates and iridescent scales, a patchwork of different bright colours altogether too gaudy for any creature Carl had ever seen. Its head was squat and crested, with spines emerging directly from its shoulders. The jaw worked spasmodically, as if struggling to draw breath, and its eyes glowed a deep fiery red. It hauled itself over the rocks with four powerfully muscled arms, claws gouging out great lumps as it came.

The red eyes fixed on him and the creature threw back its head and gave a bellowing roar. Bright tongues of flame burned in its throat, as 4

if at its centre was a vast ball of fire. Steam hissed around it as the rain boiled on its skin. Carl started to scrabble away, but the creature bounded forward, looming over him, shrieking in triumph.

As it raised one huge paw in the air, Carl realised with horror that its claws were barbed and metallic, like fishhooks. He closed his eyes as the huge arm swept down and was suddenly aware of a sharp pain, and then there was nothing but the sound of rain, and sea, and the laughter of a small child, slowly fading.

Way out in the depths of space, the police box shell of the TARDIS

appeared in a blaze of blue light, tumbling end over end in the dark. It spun for a moment, as if getting its bearings, and then, with a swirling kaleidoscope of shimmering colour flaring around it, vanished again into the time vortex.