Read Douse (Book One: At the Edge of a Hurricane) Online

Douse (Book One: At the Edge of a Hurricane) 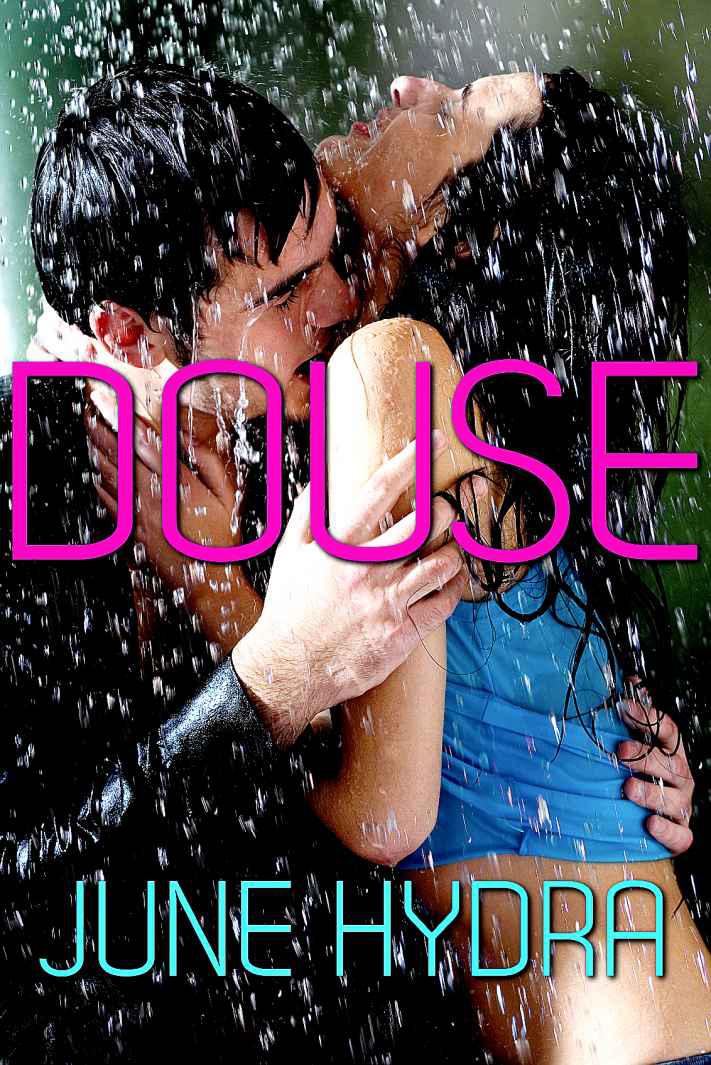 “To
cheat in college is to cheat yourself,” so said I a long time ago.
“Not only can you screw up the curve for everybody else, but you also
fool the professor into thinking they teach well.”

When
I made my first fifty bucks selling answers for an intro to Women’s
Studies final, I finally understood.

"So,
like, will I get an A?” It was a frat boy asking. Big muscles,
short-shorts, boat shoes, gel-swept hair. Probably joined because he thought
he’d nab some ass. “Well?” he said.

Hold
up! I know what you're saying to yourself, that supporting the brainless who do
nothing but party is only perpetuating the evils of cheating. Don't do it.
Don't do it, girl!

"How
much are you willing to pay?"

I
whipped my neck around despite us sitting alone in an empty lecture hall. I was
so naïve freshman year even talking about cheating gelatinized my legs.
Anyone could catch us. Though maybe I was more embarrassed being caught with
him.

"Okay,"
I said through pursed lips. "Here's my number."

Taming
our humanity hasn’t ever been done before. Humanity is a drug upon
itself.

So
why not be the good distributor? The safe distributor? I am that woman or girl,
depending how you see twenty one year-old college
graduates
.

My
answers are always eighty to ninety five percent correct. This is to ensure no
perfect scores—that's too much of a giveaway, both in terms of suspicion
and effort. You don't want the professor to become aware that kids are all
suddenly hardworking geniuses making A’s; and I definitely don't want my
services to be lowballed.

So
I stratify my prices. A B is one-fifty. An A is two-fifty. If I'm contracted
for weeks or for a project, then we're talking much higher sums.

Last
month, I made one-thousand off some rich kids. Biology papers. Five of them.
Embryos, DNA, birth, yeah.

One
thousand. When you’re fresh out of school, slumming around for work,
one thousand means no noodles but an upgrade to beans and rice.

"You're
going to get caught," [Piranha], my best girl friend loves to say.
It’s her version of “I’m worried for you.”

"Have
we been caught? Arrested? If I’m not worrying about myself, then you
don’t have to for me."

"Innocent
until proven guilty. Besides, I don't know of any cheating."

Today
is the beginning of a new semester at [XYZ University]. You don't need to know
exact names or exactly where, just know it happens everywhere.

I
walk into Barnes & Noble. Think of yours. Brownstone exterior, green swirly
writing, glass swing doors. Elevator music trumpeting on speakers. You shrink
your head between the clamp of headphones to avoid chatter coming from the
connected Starbucks, where friends hustle each other for the latest gossip.

I
wave him closer, whispering. “There you are. You should’ve come
outside with me.”

I’ve
known Caddy five years now. Tallish, with tan skin and a lightning bolt for a
smile, on account of the slightly paralyzed left side of his
face—blackish eyes and draped in hoodies all the time. He got the
nickname from hanging around preppy kids’ golf courses during freshman year.
He was never good at either golf or socializing though. He’d miss all his
shots they made him their personal caddy boy by the year’s end, and only
then did he terminate his “relationship” with the preps. He
reclaimed Caddy though.

“Someone
had major diarrhea on the seats, and I had to
go
.”

“That’s
more than I need to know about the men’s room.”

“Please.
I know you girls love to hover.”

“I
definitely don’t. That’s contributing to the problem.”

“You
know another ‘problem’?” Caddy beats a fist into an open
palm. “We’re going to make lots. [Educate Inc.]’s got more
work.”

I’ve
grown used to filtering out real names. Paranoia is a devil’s mistress.
That used to be my collegiate name. Devil according to professors and God
according to students. Now I’m Violet Walker, able to walk from the
ultraviolet to visible spectrum, dropping the goods every college kid needs to
pass.

We
find a place at Starbucks and do our hustling. Caddy has five other kids who
need answers for the upcoming biology midterm. It’s up to our company to
“educate” them. See, professors get quite lazy, and a lot of them
don’t even change their answers from semester to semester, let alone year
to year. In auditoriums filled with hundreds, it’s simply impossible to
grade everyone and not die of work overload. A professor could hire five TAs,
drain the school’s money and still not have enough bodies to sift through
the intro crap.

Moreover,
students are even lazier. Who’s going to keep their last semester
answers? Or remember how their Economics 101 class was?
Maybe
for a good
friend, one or two, and that’s it. The masses don’t bother though.

“You
have the latest info, right?”

He
hands over a folder containing names, email addresses, phone numbers.
Everyone’s in code, incognito on paper. We play our game safe.

“It
all looks good.” Caddy taps my wrist. “We’ll make a killing
on the frosh kids struggling with their English papers. And the internationals.
I’ve got three Angolan girls who need help. They only speak Portuguese in
Angola, you know that?”

I
shake my head. Caddy has all this extraneous info. He’s good that way.

“Then
there are the Chinese kids. None of them are from Hong Kong. Mostly Taiwan and the mainland.”

“Well,
mister International Relations major sir, general, pray tell, why does it
matter that they’re from Hong Kong or not?”

“Because
they speak English there, duh.” Caddy screws up his face, tilting his
head. “You should brush up on your maps and shit.”

“Okay,
and I know this one guy from Argentina. His English is passable, but
he’ll need help.”

They
all will. They’re on daddy’s dole, the internationals. Even if they
can’t speak English some of them somehow manage to relocate halfway
across the globe and insert themselves into English speaking institutions.

“By
the way,” Caddy says, “the website could use an update again.
Really, the front page needs a new design. The one we’ve had is too retro
looking.”

“There’s
a bunch more. A Japanese kid, this one Mexican girl. Those are just the ones
I’m working on. They keep coming and coming.” He props his hands
underneath his chin. “Yeah. Hey, lookie there.”

Standing
across the Starbucks is a man I nicknamed [Bishop] thanks to his religious
studies major and Christian affiliation. You know so much personal info when
you’re around Caddy.

“You
think that about everyone with a dick. Really. And they’re ninety percent
of the time dicks. Really.”

Caddy
raps the table. “He’s going away, look at that, he’s getting
away. Seriously,” he says after Bishop leaves, “you should get with
him already. I swear you two would be perfect.”

Bishop’s
a goody-two-shoes from what I’ve heard. Goldilocks hair, sings in a
choir, cured AIDS when he was fifteen, saved starving Latvian kids at eighteen.
That type. The type to wine and dine you out on the first night and then ask
for your hand in marriage the next day. Ultra-passionate, uber smart,
impossibly clingy guy.

“I
can just imagine him being suffocating.”

“You
have a dossier on me? What for?”

I
throw a napkin at Caddy’s face. His lips flap and he spits but
capitulates.

“Information
is king. Besides, I have one for myself too. I want a sweet guy in my life.
Hell, if Bishop was gay, or even bi, I’d soak up his heavenly rays of
light any day.”

Caddy
nudges his chin over the Starbucks railing. “There he is again.”

Bishop
swings down the steps to the help desk. He grills a clerk, then doubles back up
the steps, heading towards the fantasy section.

I
will admit Bishop’s aura is magnetizing. The swagger in his walk defines
him as a man carrying loads of muscle. He has to sway his hips just so to
counteract his barrel-chest. And the broad shoulders—I bet he wakes up
early, say, six A.M. to catch a workout or yoga class. Possibly he speaks
various languages. Plus his thick hair stays perfectly frozen with mousse, not
overdone so it looks greasy, but enough to signal his attention to details. He
cares for his hair, his body. He’s a good boy…

“He’s
graduated too. This past summer.”

So
he’s smart too, not a slacker kid. “He’s so unapproachable
though.”

Plus,
why would a guy like him even like me? We come from different worlds with
different perspectives. I’m not even religious nor am exactly in a
business considered moral.

“I’m
not scared of anything, ever.”

“Then
I bet you fifty bucks to go up that guy and ask him out.”

“We’re
not in middle school, Caddy, bets like that don’t hold.”

“I’ll
give you the Chinese kids’ money if you go and ask him.”

I
twist out of my seat. “Be right back,” I say, smirking.

Caddy
is right. I’m scared of rejection. But his money can go to my Roth IRA or
something. Money is tight, young, old or not rich.

Bishop
hides among the teen lit stuff. Up close, his muscles become more evident. They
strain, pushing the seams of his t-shirt up against his traps. A distinct
crease along the front of his shirt just out, marking exactly where his chest
is. His jeans hug his ass, highlighting his meaty hamstrings.

He
is a blessed specimen.

I
keep my hands wandering the bookshelf, pretending to scan for a title.
Vampires, werewolves, vampires and werewolves, novels about breaking up, novels
about getting back together, stories where the woman has no spine and basically
bends over to serve billionaires, stories where the woman basically has no
brain whatsoever and might as well be brain dead. Damsels in distress, what the
market wants. Naked women contorted in impossible sexy sword-holding poses. And
Caddy wonders why I don’t like reading: there are never any nuanced
heroines I identify with.

Not
that I’m special, it’s just, society doesn’t want to read
about girls with a little bad in them. Else you be a slut, whore, bitch, cunt,
etcetera.

My
hand lands a glancing blow against Bishop’s arm. “Oh, sorry,”
I say. He smiles at me, and an insatiable lust overcomes every mental faculty I
posses.

“I
just noticed you were…buying books.”

Bishop’s
smile widens and I heat up. “Yeah. That’s what Barnes & Nobles
is for.”

I
put out a hand. He shakes, smile stretched to its farthest points.

“Really?
That’s not something I get often.”

I
glance over at Caddy occasional while we wax poetic about the basics. Oh, he
was a religious studies major. Oh, he is Christian, and sings as front man in
his choir’s band. Oh, wow, and he has a convertible and moved out
already.

“I’m
self-employed now. I did business in college, actually.”

Bishop
leans closer. “You own your own?”

“What
side of town are you on?”

“Northwest.
I live with some roommates. One’s over there.” I swat a hand in
Caddy’s direction. “I’m going to be straight up, because I
like honestly and directness. You’re really cute to me. Would you like to
go snag dinner or do a movie together?”

Earth Angel by Linda Cajio
Temptation’s Edge by Eve Berlin
House of the Rising Sun: A Novel by James Lee Burke
Improper Arrangements by Ross, Juliana
Harlequin Superromance January 2014 - Bundle 1 of 2: Everywhere She Goes\A Promise for the Baby\That Summer at the Shore by Janice Kay Johnson
Party by Leveen, Tom
House Broken by Sonja Yoerg
Three Proposals and a Scandal: A Sons of Sin Novella by Anna Campbell
The Project by Brian Falkner
Salvation by Stephanie Tyler
Our partner