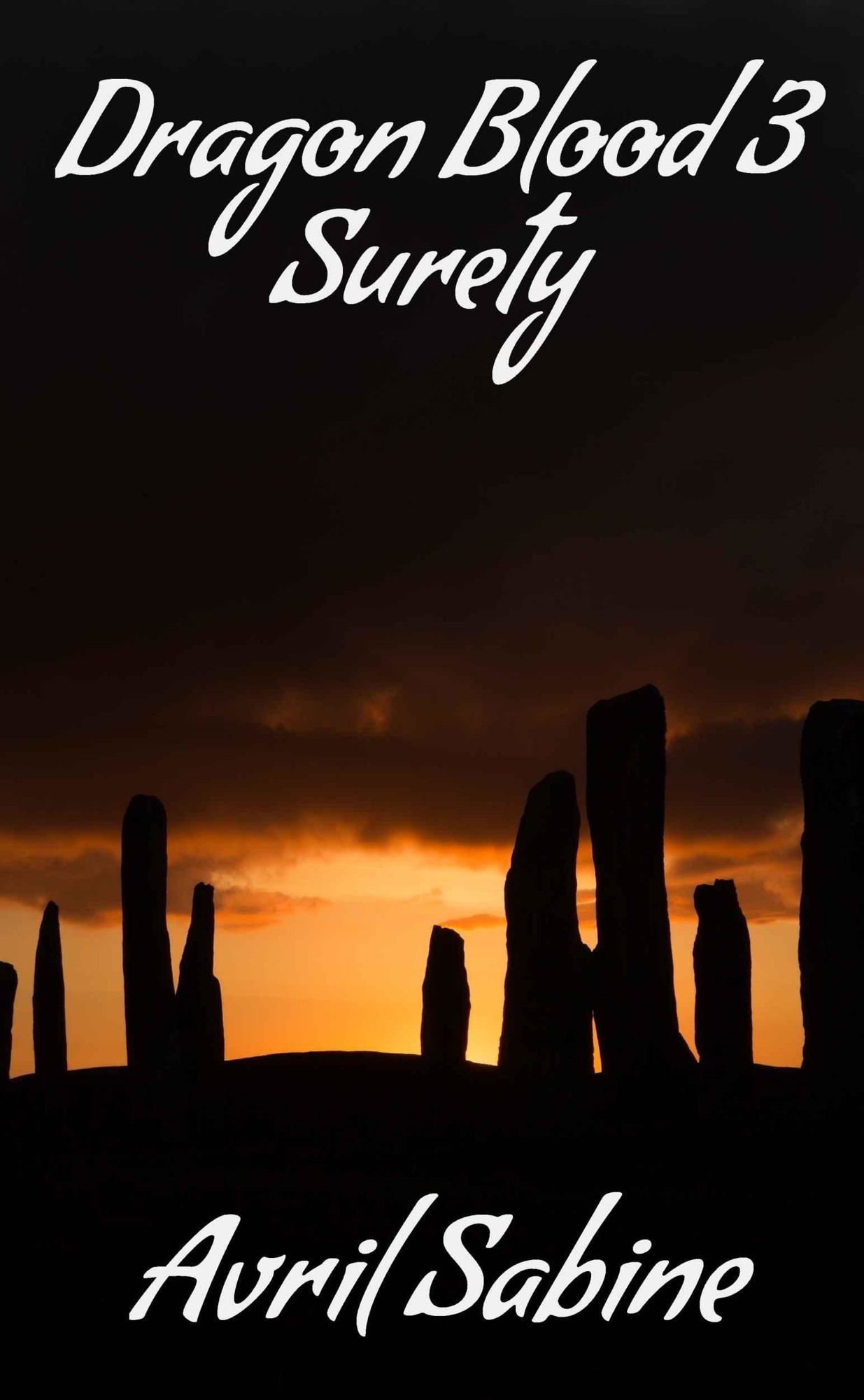 This one is also for the three of you.

Amber learns that her family has a more interesting past than even she could have imagined. That past is now creating problems for her. Negotiations, attacks by an unknown enemy and her mother discovering some of her secrets causes even more complications. The only thing that hasn’t changed is that someone wants her dead. She needs to find out who it is before they can succeed and she doesn’t get the chance to live long enough to figure out how to solve all her other problems.

This novel was written by an Australian author using Australian spelling.

Like many names there is more than one way to pronounce the following ones. These are the pronunciations used in this story.

Standing in the hallway, Amber stared at the locked door, her hands clasped together. Behind her she heard Alsandair shift and wished for probably the hundredth time in the past couple of weeks that Rian was with her instead. Rian would never have shown impatience like that.

“Do you want me to open the door or not?”

Amber turned to face Alsandair. His eyes were almost pure gold and he was dressed in black leather pants and a vest. Leather made from the hides of renegade dragons. “You said you didn’t even know if you could unlock it.”

“I said it was rare that I needed to take such care in opening a door. Normally if I need to enter a locked door, I break it down.”

She felt like sighing. Rian never argued with what she wanted, even if it took her ages to figure it out. Well, rarely ever. “I’ve already told you I don’t want her to know I’ve been in there.” This time the sigh did escape. She had to make up her mind in a hurry. Her grandmother wouldn’t be out all afternoon. As it was, she’d waited a fortnight to have the house to herself. Who knew how long before the opportunity would come again. “Okay, but be careful. She can’t know we’ve opened the door.”

Alsandair nodded, stepping past her to stand in front of the locked door. He took a small bag of tools from his pocket, that he’d gotten days ago in preparation for this moment, and began to work on the door. Minutes passed.

Far too many minutes. Amber began to wonder if Alsandair knew what he was doing. Maybe she should have waited for Rian to visit and have him unlock it for her. He’d been really quick at opening the other door. She couldn’t help thinking about the medieval armoury that had been behind the door closest to her room. Her grandmother was definitely weird. She was also a bitter old woman who loved to point out people’s faults. “Are you sure you know how to do this?”

“Of course I do.” There was an edge to Alsandair’s voice.

Amber barely held back a smile. She’d momentarily forgotten how dragons hated to be thought incapable of anything. They were also highly competitive so it was probably a good thing she hadn’t mentioned how quickly Rian had unlocked the other door.

There was a click and Alsandair turned to her with a grin. “Got it.”

“Yes! Thank you.” She threw her arms around him, about to pull away when his arms encircled her, his lips pressing against hers. Shock held her in place for a moment and when she would have pushed him away, it was too late. He was ripped from her arms.

Kade attacked Alsandair, his fist connecting with his jaw. Alsandair threw himself at Kade, attacking with equal ferocity.

“Stop. Both of you stop.” Amber jumped out of the way, bumping into the door Alsandair had unlocked, hearing it swing open behind her. Where had Kade come from? She hadn’t even noticed him until he’d attacked Alsandair. Had he finally learned how to enter the Void?

They ignored her, continuing their fight. Well, Alsandair had hesitated, but Kade had continued and Alsandair had been forced to defend himself. Amber took another step back, bumping into the half open door behind her as she raised her hands, calling fireballs to fill them.

“If you don’t stop I’ll throw these at both of you. Do you hear me?” They continued to ignore her. “I mean it.” Maybe. She really didn’t want to hurt them, but it looked like they weren’t going to leave her much choice. Particularly since they looked like they were determined to kill each other.

“Enough!” The word rang up the stairs and Helen reached the top step as the two young men sprang apart to face her. “What’s going on here?” Silence met the grey haired woman who wore wire-rimmed glasses and was bony rather than slim. “Well?” Her gaze turned to Amber and her expression went from irritated to furious in seconds. “Get out of there now.”

Alsandair’s gaze turned to Amber and his face was suddenly filled with horror. “Killer!”

Amber looked from him to Kade, who’s expression mirrored Alsandair’s when he looked in her direction. “What?” What had she just done to have him call her a killer? The fire in her hands? But that didn’t make sense.

“Out! Now!” Helen rushed towards her, a fist raised.

Panicking, Amber extinguished the fire in her hands and, taking another step back, slammed the door shut, locking it before she turned and faced the room. She took a step backwards, colliding with the door. “No.” The word was filled with a mix of horror, disbelief and fear. Behind her Helen banged on the door demanding she open it. Amber took a hesitant step forward, reaching out a hand to the skeleton taking up the centre of the nearly empty room. “No.” The word was a breath of air as her fingers brushed against the skull. She pulled her hand back, her eyes closing as she took a deep breath, trying to calm herself.

“Do you hear me, Amber? Now!” Helen continued to bang on the door.

Opening her eyes, Amber found that nothing had changed. There was still a dragon skeleton, wired together so it stood in front of her. With a hand pressed against her throat, she took a shaky breath as she tried to figure out what it meant. Why did these things keep happening to her? She ignored the thought that it had been her choice to open the door.

She couldn’t leave Helen bashing on the door all afternoon. Or Kade and Alsandair out there with her. What if she attacked them? Reaching for the doorhandle, Amber noticed her hand was shaking. She tried to steady it, but had no luck. Unlocking and opening the door, she stood there, staring at Helen who had her hand raised to hit the door again. Amber gestured behind herself. “Explain that.”

“I think you already know. Traitor.” Helen glared at her.

“Did you know about this?” Kade pointed at the skeleton, his golden brown eyes, that matched the sun streaks in his brown hair, firmly on her.

Amber shook her head. “How could I have? Kade, that kiss-”

“I’m not interested. Once someone tells me what’s going on with that,” he gestured towards the skeleton, “I’m out of here.”

“What do you mean out of here?”

“Who was it? Who changed you?” Helen demanded. “Was it one of them?” She pointed first to Kade and then to Alsandair.

Amber ignored Helen, her eyes still on Kade. “What do you mean out of here?”

“Nothing happened. Not really. I was just about to push him away. And where did you come from anyway?”

“Nothing happened? Are you trying to tell me you didn’t kiss him?”

Amber shook her head, ignoring Helen’s demands to know what was going on. Convincing Kade was more important than paying attention to her grandmother. “Of course I didn’t. He kissed me.”

“I will believe you, on one condition.”

Amber frowned, not making any sense of Kade’s words. “What do you mean? There shouldn’t be any conditions. You should just trust me.”

Kade laughed, a sharp sound. “Do you know nothing about us after all this time?”

Amber’s mouth dropped open and she tried to speak. Death? Alsandair’s? For a kiss? “You’ve got to be kidding.”

“I-” Amber broke off. Why did her life have to constantly go out of control like this? How could she agree to that?

“That’s what I thought.” Kade vanished.

“Kade! No!” Amber took a step forward. He was gone. Standing in the place he had been felt no different. He could obviously use the Void now.

“Him! He’s the dragon?” Helen demanded.

Shaking her head, Amber looked from Helen to Alsandair, not knowing what to do or say. She had to go after Kade. There was no way she was going to lose him over a misunderstanding.

“He knows, doesn’t he? He knows I can’t tell anyone or do anything. Is that what this is all about? Are they testing me? Forty years ago I turned my back on my family and friends for Charles and Roger. Why would I risk them now?”

Amber tried to make sense of her grandmother’s comment. She knew Charles was her grandfather’s name. A man who’d died long before she’d been born. “Who’s Roger?”

“My son. He was six-years-old when they took him. Only a little boy. No threat to anyone.”

Amber stepped forward to look down the stairs at her mother. From the look on her face, learning she had a brother was as much of a shock as learning about an uncle had been for Amber. What had made her think opening the second locked door was a good idea? Now the afternoon was turning into a complete disaster.

“What are you doing here, Donna?” Helen demanded.

“Don’t be smart with me. I’m the one who let you live here. What are you doing home now? You’re meant to be out with that man you’re dating. The one you’re too ashamed to bring home,” Helen said.

“A patient called him. Who is Roger?” Donna started up the steps.

Amber felt Alsandair step closer to her and she wanted to push him away. What had he been thinking?

“I don’t know why you’re dating a shrink. As if we need anyone around here wanting to mess with our heads.” Helen moved away from the stairs, heading for the unlocked door.

“Oh no you don’t.” Amber hurried into the room.

“Get out of there now.” Helen glared at her.

“Amber! What do you think you’re doing in-” Donna broke off as she stopped in front of the room, her eyes opening wide.

Alsandair slipped past the two women in the doorway to stand at Amber’s shoulder.
“How do you want to deal with this?”
He asked Amber.

Amber shot a dark look at Alsandair. “I don’t need any more help from you today.”

“Not even my death?”

Come to Harm by Catriona McPherson
No Brighter Dream: The Pascal Trilogy - Book 3 by Kingsley, Katherine
The Shepherd's Crown by Terry Pratchett
Not Quite Dead (A NightHunter Novel) by Stephanie Rowe
After Ever After by Rowan Coleman
Faery Craft: Weaving Connections with the Enchanted Realm by Carding, Emily
Deep Fried Homicide (The Donut Shop Mysteries) by Jessica Beck
Penumbra by Eric Brown
vampireinthebasement by Crymsyn Hart
Diggers by Terry Pratchett
Our partner