Dusk With a Dangerous Duke 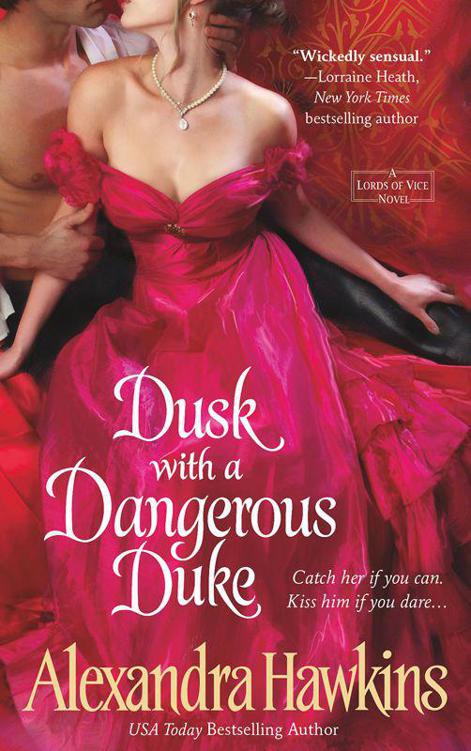 “Vices are their own punishment.”

Praise for the Lords of Vice novels

“Nicolas, there you are.” His grandmother’s sharp gaze settled on him as she beckoned impatiently for him to enter. “Come … join us. You may remain, young Vanewright, if you are able to refrain from disrupting our meeting.”

“Thank you, madam,” Christopher blurted out automatically, and then winced when Nicolas’s grandmother and her male companions halted their discussion and stared at him. His friend shrugged sheepishly. “My apologies. It won’t happen again—madam.”

Nicolas Stuart Towers, Duke of Huntsley, gave his friend a pitying look. He had stood silently on numerous occasions as his grandmother had reduced grown men to quivering, spineless specimens with a stern look. It was no surprise that his twelve-year-old companion was terrified of the wizened old dragon.

In truth, even he was a little frightened of her.

After he’d lost both of his parents to influenza six years earlier, his grandmother had come to live with him at Telcliff Castle. She had told the grieving Nicolas that he needed a strong hand and guidance now that he had inherited the dukedom, and the dowager was capable of delivering both. Not counting some distant cousins, his grandmother was the only family that he had left. She was a tough old bird, but he loved her dearly. There was nothing he would not do for her.

Assuming Christopher would keep a respectful distance, Nicolas headed toward his grandmother and her companions. As he crossed the room, his gaze was drawn to one of the corners where a small child was inconsolably weeping. Even with her ruddy cheeks blotchy with tears, she was a pretty little thing with her mop of blond curls and a mutinous pout on her bow-shaped mouth. His smooth brow furrowed with mild curiosity as he observed a harried nursemaid wrap her arms around the two-year-old while uttering hushed, unintelligible assurances.

Dismissing the unknown girl from his thoughts, he politely bowed to his grandmother and the two gentlemen. The man to her left was his grandmother’s solicitor, Mr. Porter. The other gentleman was a stranger.

“Grandmother, I was unaware that we had guests this afternoon.”

The child in the corner howled her indignation.

The dowager’s left eyelid twitched and her mouth tightened with disapproval, but she did not glance in the girl’s direction. This was extraordinary, since his grandmother had patience neither for disruptions nor for the little girls who caused them. Instead, she placed her hand on Nicolas’s back and gently nudged him to join the two men.

“Nicolas, you are acquainted with Mr. Porter. Allow me to introduce you to an old and dear friend of mine, Sir Auden Castell.”

Sir Auden appeared to be as ancient as his grandmother. In his youth, he must have cut an impressive figure with his height and girth. However, time had not been kind to the elderly gentleman. His shoulders had bowed with age, giving him a sizable hump on his upper back. What muscle he possessed had withered and turned to fat, but his brown eyes were friendly as they assessed Nicolas from head to toe.

“Mary, you have a fine lad squiring you about these days,” Sir Auden said, his baritone voice warm with approval.

Mary,
Nicolas thought, his dark eyebrows shooting upward in curiosity. The gentleman was a very good friend of his grandmother’s to be bandying about her given name so freely.

Not that his grandmother needed his protection. With the loss of her husband and her son, she had made a place for herself in a social world that was dominated by her male peers. The respect she commanded was to be envied and admired, and he was confident that gentlemen would see him in the same manner.

His grandmother accepted Sir Auden’s compliment with a nod of her head. “It was a tragedy that Nicolas has been deprived of my son’s guidance. Nevertheless, he is a Towers. The strength of his bloodline guides him instinctively. He was born with the honor and compassion to be a protector of his people, and I have come to depend on my grandson in all matters.”

Nicolas stood silently, a slightly dazed expression on his face. He felt as if his grandmother had cuffed him hard on the skull instead of offering praise. The dowager did not believe in false praise or coddling. In her opinion, it fostered weakness, which explained why there were always a few males in every generation who were incapable of living up to the Towers name. She certainly would not tolerate such flaws in her only grandson, who had a duty not only to the family name but also to the people who depended on him.

After the loss of his parents, the dowager’s approval meant everything to him. His narrow chest puffed with pride with the knowledge his grandmother held him in such high esteem.

“I am satisfied,” Sir Auden said to the dowager. “Porter, is the paperwork in order so we can make it official?”

Mr. Porter gave the spectacles sliding down his nose an absent push before he gathered up the papers on his desk. “I will need both you and Her Grace to review what I’ve prepared, but I believe you will be pleased.”

“Excellent,” Sir Auden said, clapping the solicitor on the shoulder. “Good work, Porter. I knew we could count on you.”

“Yes, well done, Samuel,” the dowager concurred. “Your discretion regarding our delicate situation is appreciated.”

“What is going on, Grandmother?” Nicolas politely interjected.

Sir Auden blinked in surprise. “Have you not told him?”

The dowager drew herself up at the mild rebuke. “There was no point in involving the boy until we had come to an agreement and all parties were present.”

“Tell me what precisely?”

She glanced impatiently at him, for it was uncommon for him or anyone else to interrupt her. “Your marriage to Lady Grace Kearly. It is an excellent match. Your bride is the daughter of a duke and possesses an exceptional dowry. Her pure lineage and wealth will be an asset to the family. I hope you appreciate your good fortune.”

Good fortune?
Nicolas could not form a proper response to the outrageous statement. He was too young to marry. What about his education? And his private thoughts of traveling the world? Hell, he had yet to bed his first female!

Out of desperation, he looked to Christopher for silent support. His friend was the Earl of Vanewright, and as far as Nicolas knew
his
family was not trying to marry him off before he grew his first beard. Unfortunately, Christopher was blithely oblivious to his friend’s plight. At some point, he had wandered over to the pretty nursemaid and her young charge. The little girl was sitting contently on Christopher’s hip while he flirted with the servant.

What a fine friend he was, Nicolas thought. He was in trouble and Christopher was chasing after a bit of skirt who was never going to let herself be caught.

“Nicolas, did you hear a single word I’ve uttered?”

He swallowed thickly and shook his head. His skull felt like it was stuffed with straw; worse, he worried that he might disgrace himself and faint.

His soft admission earned a few sympathetic chuckles from Mr. Porter and Sir Auden. The dowager, on the other hand, had pursed her lips together, a visible sign of her displeasure.

“Who said anything of you marrying this very day?” she snapped, and for Nicolas, it might as well have been a lash. “These arrangements are often set in place years before the actual marriage takes place. I thought you would be more grateful.”

“I am, Grandmother,” he mumbled, not feeling appreciative at all. He was old enough to know that money and beauty did not always go hand in hand. What if he had to marry a lady so long in the tooth that no man would have her?

“So I can see,” the dowager replied.

Too vexed to speak further on the subject, she beckoned for his friend to join them. She was probably going to banish him and Christopher from her sight. They would be lucky to get supper this evening.

Still holding the two-year-old girl, his friend crossed the room with the nursemaid following in his wake. “How may I be of service, Your Grace?”

“Such a pretty child,” his grandmother said, opening her arms. “I believe she likes you, Vanewright.”

“I suppose,” Christopher replied cautiously as he finally sensed the tension pouring off his friend.

“Of course, Your Grace.” He took a step forward and handed the girl to the dowager.

His grandmother smiled at the child. She cast a shrewd glance at her grandson. “Your parents’ early deaths deprived you of siblings, Nicolas. Come … why do you not hold her a moment.”

Considering the amount of trouble he was in, Nicolas immediately held out his hands and accepted the light burden even though he had no interest in the child. His thoughts were on bigger problems. Unused to handling young children, he felt awkward and the two-year-old seemed to sense his discomfort. She immediately reached out for Christopher and made soft anxious sounds.

Rebuffed by a sniveling girl. Nicolas doubted his afternoon could get worse.

“She’s as twitchy as a monkey,” Nicolas said with false cheer, struggling not to drop her as she tried to free herself from his grasp. “Does she have a name?”

The girl slipped through his boneless grasp, her backside hitting the floor first. Everyone in the room gasped. Lady Grace promptly let out an earsplitting scream.

“It was an accident!” he hastily explained to the scowling adults.

Horrified that he might have hurt the child, Nicolas fell to his knees and wrapped his arms around her with the intention of collecting her off the floor. This—girl—was his bride? Was this some kind of jest?

Frustrated and in no mood to be handled, the girl leaned forward and sank her teeth into his wrist. Nicolas yelped in pain. Those tiny sharp teeth sliced into his flesh and drew blood.

Evidently, Lady Grace didn’t think much of their arranged marriage, either.

It was a cold bitter night for traveling the rough northern countryside roads on horseback. Stubborn and foolhardy, Hunter silently acknowledged his current predicament as he thought of the dry, comfortable coach he had abandoned at the last inn three hours behind him. Warm and his belly full, his coachman was likely savoring his fifth pot of ale in front of the hearth as he regaled his companions with raunchy tales of his master’s exploits and the madness that had burned in his brain like a fever.

The Art of Mental Training - a Guide to Performance Excellence (Classic Edition) by D. C. Gonzalez
NoBounds by Ann Jacobs
Just a Little Sequel by Tracie Puckett
Nightbloom by Juliette Cross
Whispers of Old Winds by George Seaton
Beaches and Cream by Kojo Black
My Sister Jodie by Jacqueline Wilson
Complicate Me (The Good Ol' Boys #1) by M. Robinson
Power Games by Judith Cutler
The Selkie Enchantress by Sophie Moss
Our partner