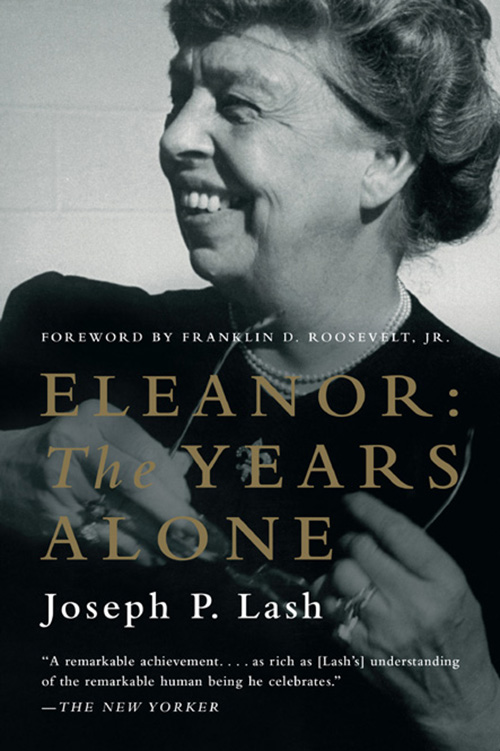 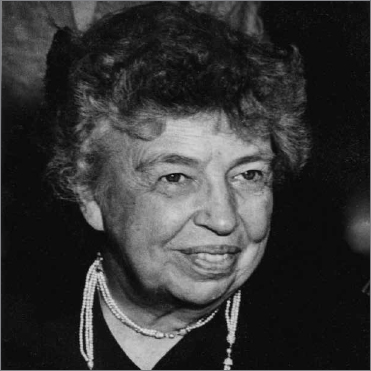 To Mrs. Roosevelt’s grandchildren
and our own

1.
CHAMPION OF HER HUSBAND’S IDEALS

3.
A MAGNA CARTA FOR MANKIND

5.
THE UNITED NATIONS AND A JEWISH HOMELAND

14.
A NEW GENERATION TAKES OVER

Appendix B
: M
RS
. R
OOSEVELT AND THE
S
ULTAN OF
M
OROCCO

T
HERE IS NOT MUCH TO BE ADDED TO THE INTRODUCTION
that I wrote for
Eleanor and Franklin
. The reviewers of that book shared my judgment that Mr. Lash had made exemplary use of the private papers that Mother had left to me as her literary executor and that I had asked Mr. Lash to examine with a view to writing a biography.

A surprisingly large number of readers of
Eleanor and Franklin
wrote to express the hope that Mr. Lash would go on to write a sequel to that book covering my mother’s years alone. Here is that sequel. It will be up to the readers to say whether it maintains the high standards of the earlier book; in my view it does. It is the story of my mother alone, but even more, it is the story of those years in which her internal development and her work and experience with my father come to full and creative maturity. We, her children, watched with pride as she won the love and affection as well as respect of people everywhere and truly earned the title of First Lady of the World.

I hope this book will be read by the generation that came to intellectual and political maturity in the sixties and early seventies. They will then better understand their parents. Here in Mr. Lash’s careful and detailed documentation of Mother’s encounters with the Communists at the United Nations, they will see her moving from the belief that our good will and readiness to compromise would be reciprocated by the Communists to the realization that Stalin’s emissaries respected strength alone. Those who speak critically of the West’s “cold war” mentality in the years that followed
Father’s death should examine closely, as Mr. Lash’s chronicle enables them to do, my mother’s experiences at the United Nations.

Equally illuminating, and singularly moving, is the book’s account of Mother’s role in helping establish a homeland for the Jewish people. If young people today want to understand why both my mother’s generation and mine invested this cause with the passion and faithfulness that liberals in the thirties gave to Republican Spain, they should read Mr. Lash’s account of the birth of Israel.

Of course, there is much more in this book. My mother described her work in the years after my father’s death as the work that she did on her own. She dealt with the most powerful men of the postwar world—presidents, cardinals, commissars, political bosses, and Wall Street tycoons. She did so with such self-confidence, authority, independence, and astuteness that she demonstrated anew, if it needed another demonstration, the rightness of woman’s claim to equality with man.

Yet she also led a very private life. Despite her involvement in public affairs, she always attached a larger importance to the personal and private side of life. Her children, grandchildren, great-grandchildren, and a few close friends always had first claim on her time. The importance that she attached to success in private functioning is attested to by a letter she wrote on October 3, 1949, to the wife of George C. Edwards, then a candidate for mayor in Detroit and now a federal judge:

The cost of being in politics is fine for one’s ideals but it is very high in personal sacrifice, I think. No matter what happens, win or lose, I do not think a woman ever feels that the loss in personal relations is compensated for, but when a man makes up his mind to go into politics, I think that is the only thing he can do. It is in his blood and if he is at all successful he will go on all his life and one must make the best of it, and somehow try to have some of the things one wants for oneself, as well as serving the higher purposes which are pretty tough taskmasters.

This book is going to press just as the Eleanor Roosevelt wings of the Franklin D. Roosevelt Library at Hyde Park are being opened to the public. As visitors enter the library they will be confronted by two busts on either side of the entrance hall, one of my father and the other of my mother. The two figures are symbolic of history’s recognition that not only were they a team, but a team of equals. What is made visible in the splendid displays and exhibits at the library is given life here in these pages.

I
MUST AGAIN ACKNOWLEDGE MY INDEBTEDNESS TO THOSE
who assisted me with
Eleanor and Franklin
and who also helped with
Eleanor: The Years Alone
. In connection with this book I am particularly grateful to A. David Gurewitsch, who made his files and his splendid collection of photographs available to me. Maureen Corr, who became Mrs. Roosevelt’s private secretary after Malvina Thompson’s death, was generous with her recollections, as was Mrs. Roosevelt’s old friend Esther Lape. I wish also to thank the friends who kindly read these pages, including Dr. John P. Humphrey, and Egon Schwelb and Giorgio Pagnanelli of the Human Rights Division of the United Nations.

I am happy to record my obligation once more to the Franklin D. Roosevelt Library, whose present director, Mr. J. C. James, was as cooperative as his predecessors, and to Mr. Jerry Deyo, audio-visual archivist, and William F. Stickle, staff photographer.

My sister Elsie Lash typed this manuscript as she did the earlier one.

It was my editor at W. W. Norton & Company, Evan Thomas, who felt that the first volume should end with the death of FDR and that Mrs. Roosevelt’s years alone should be written as another book. He was right about this, as he was about so many other matters connected with the Eleanor Roosevelt volumes.

Finally, I wish again to record my indebtedness to my wife, Trude. How much she has been a companion in this enterprise is suggested by a letter that I wrote in 1967 to Franklin Jr. and to the publisher and placed alongside my will in which I expressed the hope that in the event I was unable to finish this book they would ask her to do so.