Elves: Rise of the TaiGethen 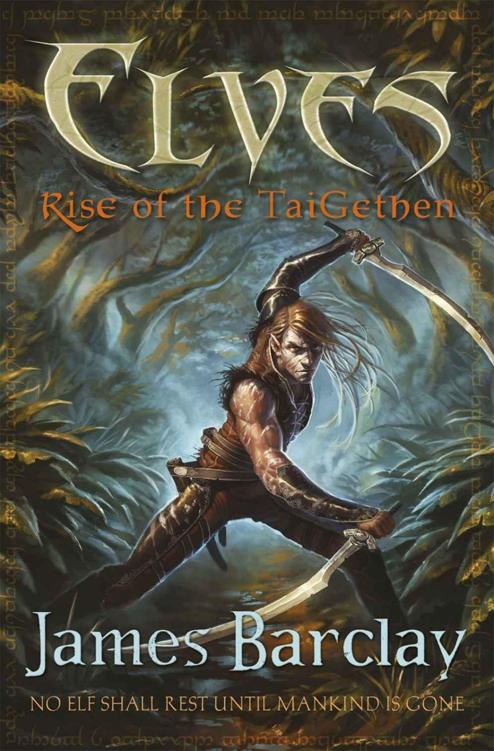 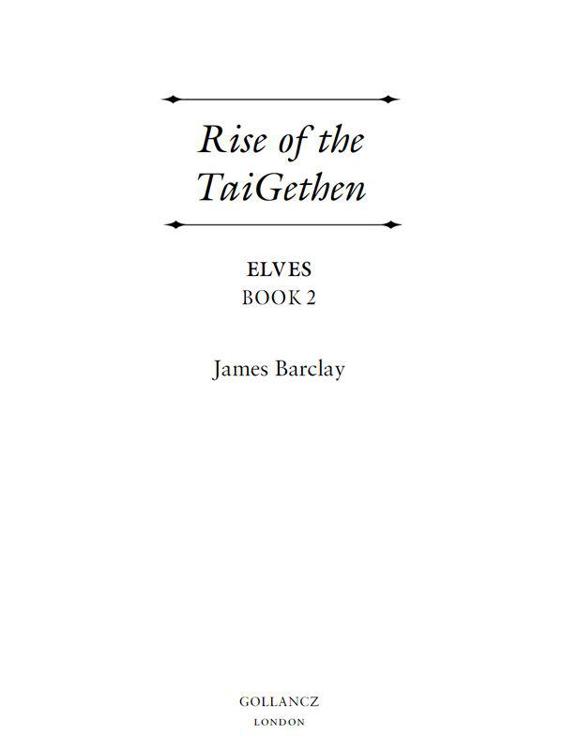 For Oliver, who completes our family

For a hundred and twenty years, the forest bled unchecked.

They stood together on the cliffs surrounding the Ultan and stared out across the rainforest. Helpless anger set Auum’s teeth to grind and his body to shiver. The scale of the desecration was so vast it was hard to comprehend.

In the early years following the human invasion, when the elves were desperately weak and scattered throughout the rainforest, their enemy had been ruthless in their exploitation of the resources they had come to steal. The damage was appalling, perhaps irreversible. Next to Auum, Serrin was trembling and his panther was nuzzling him, trying to comfort him.

‘Why do you put yourself through this?’ asked Auum.

‘Because you must understand what you allowed to happen. It is my duty to make you see.’

The rainforest had been obliterated for a full two miles from the borders of Ysundeneth. Magic had been used to clear the undergrowth. The devastation to the west had only been halted by swamp and cliff, but then the humans had turned south and used the River Ix instead.

Roads followed the river for over seventy miles and barges pushed yet further up, carrying slave gangs into the heart of the forest to log wherever the banks offered a landing point. The river was choked with the trunks of great old trees outside the lumber mills of Ysundeneth, which worked day and night.

Ships departed every day, taking Beeth’s precious wood north to Balaia, returning packed with more tools to commit yet greater atrocities at a yet greater pace. Auum knew it was the same outside Calaius’ second and third cities. The forest was under attack across the northern coast. And where the trees still stood, the most valuable plants and flowers were harvested before the axes began to fall.

Where the elves had always farmed the forest the humans destroyed it without a shrug, for reasons which held a horrible logic. An elf must necessarily look forward hundreds of years and would always desire to look upon the beauty of the canopy. A human, whose life was over in a blink, required no such foresight.

Humans saw the vastness of the canopy and an endless supply of timber. They failed to realise the ramifications of harvesting so much of it and apparently cared less. Elves knew that the balance, once critically undone, was gone for ever. It had not happened yet, but that time would come. Not this year, not the next, nor in the next decade. But it would come.

And so Serrin of the ClawBound had brought Auum to see what he knew in his heart but did not want to admit.

‘We are helpless to stop them,’ said Auum. ‘We are so few, and the cost our enslaved pay for our resistance is so great.’

‘So you will sit by and watch the humans destroy our world. You. Arch of the TaiGethen. Sworn to defend your country, your people and your
faith
.’

Auum sighed. Serrin had been running the rainforest with panthers and the other ClawBound for a hundred years, and it had taken a huge toll on his pure elven side. His reasoning seemed affected; his vocabulary was diminished, and his faith was linked far more closely to Tual and Beeth than it was to Yniss.

‘You know it’s not that simple. My responsibility is the survival of the elven race. I have to look ahead, beyond the present and the crimes I am forced to witness. We can’t defeat man, not yet. We have to build our strength in combat and magic. I hate it, but it’s reality.

‘Of course we could delay man’s rape of our forest. But for every man we kill, an innocent elf dies in agony in Ysundeneth. I am responsible for those lives, just as I am for those elves who remain free.’

Serrin regarded him evenly and shrugged. ‘When the cities are empty of slaves, who will they visit their revenge upon?’

‘Look beyond your hunting grounds,’ said Auum sharply. ‘When the cities are empty of slaves, there will be too few elves to rebuild our people. We need them and the Katurans or we will die out.’

Auum faced Serrin and the sadness that swept him was akin to grief. ‘You do not believe that the Ynissul can hope to survive alone. You were a Silent Priest, an adept of the harmony, a lover of every elven thread.’

‘Look at our forest,’ said Serrin. ‘Look at the pace of desecration. The humans will kill us one way or another. There will come a day when your words will no longer hold the ClawBound at bay. I hope you will be ready to stand by us when that day comes.’

Auum watched Serrin and his panther move smoothly away to the narrow paths down to the forest floor. Night was falling and Auum watched as it covered the enormity of man’s crimes. He remained, and prayed to Yniss for guidance, until the sun kissed the land once again and recoiled at the horror it touched.

After a hundred and fifty years, the bleeding had to be staunched.

Auum dropped to a crouch, a curt hand gesture bidding his Tais do likewise. Down here in the leaf litter, dense scrub and brush, the echoes of animals high in the rainforest canopy were muted. Alien sounds met the ear unsullied.

Auum turned back towards the temple at Aryndeneth. The sound he’d heard had been distant and none of the five who faced him had registered it. They were all promising adepts and soon to be placed in active TaiGethen cells for the first time. All were on course to be cell leaders in a decade, maybe two.

Auum studied their faces while they awaited his words, their eyes shining with the honour he bestowed on them with his presence as their teacher. Their admiration embarrassed him but they listened well. Their camouflage had been painted on their faces in the correct manner; in deference to Yniss, father of them all, to Beeth, god of root and branch and to the rituals of the TaiGethen warrior.

None of them displayed fear. Auum knew why: because they were with him. With Auum, who had faced the Garonin and survived. Auum, who had found Takaar and fought by his side to free the elves of Ysundeneth. Auum, the Arch of the TaiGethen. Immortal.

‘But not invincible,’ he murmured. They should be as scared as he was. ‘What do you hear?’

Each of them strained to detect the sound their tutor had already heard. He knew what they would be doing: filtering out the sounds of Tual’s creatures as best they could. His students must also ignore the breeze, the fall of leaves and the sound of rainwater dripping to the forest floor. The sounds that remained gave Auum reason to shudder.

‘It is too big to be a bird,’ said Elyss, the best of them. She was heading for greatness. ‘And there are many of them.’

‘Twenty-two,’ corrected Auum. He turned to the others. ‘Excellent. Do you concur?’

Three of the TaiGethen students nodded.

‘I am shamed that I can hear nothing of this,’ said Malaar, letting his gaze drop.

Auum smiled. ‘There is no shame. But there will be combat. Elyss can hear mages on their wings of shade. They are coming to Aryndeneth, and we might just get there before them. Five-pace spread, attack on sight. Tais, we move.’

With every pace Auum could feel the enemy closing, as if they were walking up the length of his back. The pace of the TaiGethen was matched only by the panther under the canopy. Above them, though, where the dense vegetation and the grasping vines and roots were mere myth and rumour, the humans’ speed was unhindered.

High in the upper reaches of the canopy, bird calls charted waypoints in the enemy’s progress. Hawk eagle cries pierced the clear sky. Toucan bills clacked out a staccato message of threat and fell silent when the shadows fell across their steepling perches.

In the mid-level, the melodic calls of gibbons took on a desperate quality as they tried to reaffirm their territory against the approach of a new and terrifying invader. Everywhere, bird, beast and lizard shrilled, growled or chittered. Each sound was a call to hide or flee.

Auum looked to his right. Elyss flitted through the dense undergrowth. Her footfalls were light, the passage of her body barely disturbing bush or branch, her breathing measured and calm. And when the mages passed overhead, with the TaiGethen still a hundred paces short of the temple apron, Auum saw her react, glance skywards and increase her pace.

She felt it all. She was tuned to all that surrounded her and her mind was open to the forest, each message received through her ears, her feet and soaking into her skin. Elyss was the future. More and more like her were being born. They were the TaiGethen of tomorrow.

‘They are ahead of us,’ said Auum, his voice carrying to his people and no further. ‘But they must still descend through the canopy.’

‘We must call to warn the temple guard,’ said Tiiraj from Auum’s left.

‘They should need no warning and the humans must not know of our approach.’ Auum reached down to his belt. ‘Jaqrui pouches open. Choose your targets carefully.’

Auum slid between the balsa and fig trees that guarded the approach to Aryndeneth, the Earth Home. Growing tightly together, bound by vine and liana and by ivy which trailed to snag at clothes and grab at careless feet, they were impenetrable to any man without a blade.

Fifty paces out, Auum could see the walls of the domed temple glinting in the last of the sunlight before the clouds closed overhead and the rains came again. Gold and green and covered with creepers and climbers, the temple walls were a sight to gladden the heart of any elf fortunate enough to lay eyes upon them. Sanctuary.

Auum and his Tais would break from the rainforest at the right-hand edge of the temple apron. With every pace they closed, Auum could see and hear more. Figures were running from left to right, towards the temple. Other figures darted into cover positions: the Al-Arynaar. Auum felt a small measure of comfort on seeing them; his work training the temple guard had not been in vain.

The Weight of Words (The WORDS Series) by Guthrie, Georgina
His Illegal Self by Peter Carey
Upon A Winter's Night by Harper, Karen
Cash Burn by Michael Berrier
Glow by Ned Beauman
Dragonfly Secret by Carolyn J. Gold
The Crimson League (The Herezoth Trilogy) by Grefer, Victoria
Steam City Pirates by Jim Musgrave
Cold Shot by Dani Pettrey
Marked (The Pack) by Cox, Suzanne
Our partner