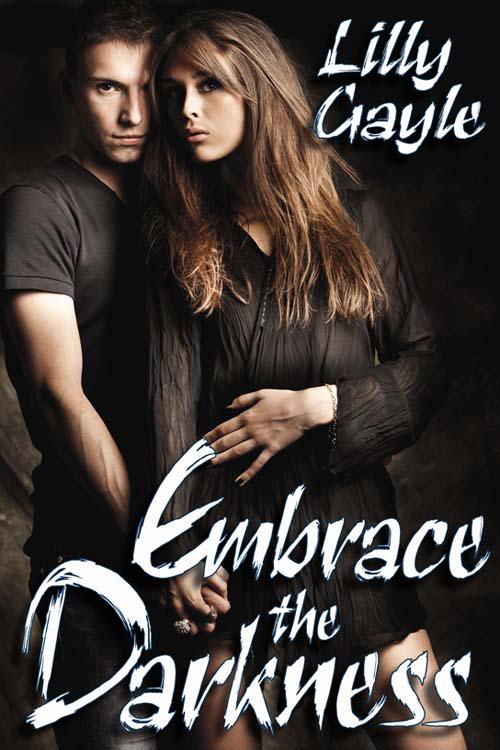 “
EMBRACE THE DARKNESS
, the enthralling sequel to
OUT OF THE DARKNESS
, will grip you with compelling characters enmeshed in a mystery that keeps you on the edge of your seat as unexpected twists reveal the characters' darkest secrets.”

“Lilly Gayle's storytelling skill will have you racing to the end before you know it.
EMBRACE THE DARKNESS
is Book Two in a unique, exciting series peopled with larger-than-life characters who lingered in my heart and mind long after I closed the book.”

~LaVerne Clark, author of Guardian of the Jewel,

a Jewel of the Night suspense story, and Affinity

“A dark and powerful Hero. A cynical, no nonsense Heroine. An ancient alliance pulls them together, threatening to destroy them both. Lilly Gayle puts a new spin on the vampire love story with
EMBRACE THE DARKNESS
.”

In loving memory of my sister,

You showed me the true meaning

of faith, hope, and perseverance.

To Johnny for always believing in me.

To Lauren for listening and being there when I needed you. To Jennifer and her husband Sgt. Michael Henard

for answering my military questions and for supporting me from half a world away. I love you all.

Thanks to the best CP's in the world, Amy Corwin

and Andris Bear. Couldn't have done it without you ladies. And to all my imaging friends at GMC, especially Jennifer, Selena, and Linda, who kept pushing me to finish this book.

Thanks, Andris, for getting the "cop" info

from your Bear. Any mistakes regarding police procedures and the Asheville PD in particular

and Laura Florand for helping me with French.

Any mistakes or butchering of the French language

are entirely my fault.

Last but not least, thanks to my very patient editor,

Lill Farrell. You're the best.

Goose bumps pebbled her skin. She jerked, glancing over her shoulder, her hand poised above the light switch. The lab was blessedly empty, but there’d been a sound to her left—a whisper, like silk sliding over satin, barely audible.

Silence answered. She was alone in the room. Fear held her immobile. She tasted it in her mouth, hot and metallic. Felt it in the sudden rush of blood pounding in her ears.

“I’m being ridiculous,” she said aloud, trying to convince herself she was overreacting. Security at Lifeblood of America was state of the art. No one could break in—no one human.

But was any security system capable of keeping out something darker and more sinister?

Acid rose from the pit of her stomach. She swallowed bitter bile and switched off the lights. Then, taking a deep breath to calm her nerves, she pushed open the door and stepped into the quiet corridor.

At this late hour, the facility was practically deserted, the other labs dark and empty. So why did it feel as if unseen eyes tracked her?

She glanced down the hall, praying Axle would step off the elevator. Seconds ticked by like hours but the doors remained shut.

When the night security guard made his rounds at five a.m., he always stopped by the lab to escort her and Dr. Megan Harper to the lobby and out to their cars. But Megan hadn’t worked tonight. And Axle looked like a no-show.

Maybe he’s tied up at the desk and he’s just late making his rounds.

The thought comforted her, relieving some of her anxiety. Most likely, Axle would arrive just as she reached the elevator.

Forcing herself to relax, she released the handle and let the lab door close behind her. The LED on the control panel blinked red as it clicked shut. She took a deep breath and straightened her shoulders before walking the fifteen feet to the elevator.

By the time she reached the gleaming, polished doors and pushed the down arrow, she’d broken out in a cold sweat. Her blouse clung to her back, her heart hammering so hard against her ribs it took every ounce of courage she possessed to put one foot in front of the other and step inside the empty four-by-six box.

She was alone. Nothing crouched above the elevator’s ceiling waiting to pounce. Yet, it seemed as if something far less innocuous than the cold, inanimate eye of the camera watched her.

Fear prickling her skin, she wiped sweat-slicked palms down the sides of her lab coat before pressing the button for the lobby. The moment the elevator doors slid open on the ground floor, she ran toward the reception area.

During the day, a receptionist sat at the curved mahogany desk in front of the scenic mountain mural. At night, Axle watched the lobby between patrols while Richard monitored the surveillance cameras in the office behind the receptionist’s chair. But Axle hadn’t made it to the third floor, and he wasn’t at the desk.

“Hello?” The hairs on the nape of her neck stood on end as she stepped around the corner and opened the door marked “Security.”

Flickering images cast eerie shadows on the walls as the security monitors switched to different cameras and angles. Nothing moved on any of the screens and no one watched. It was as if she were the only living soul on earth.

Where are Richard and Axle?

Neither man would abandon his post—unless there was an emergency. But why hadn’t they called her in the lab? Or sounded an alarm?

Her blood turned to ice as she walked back to the security desk and picked up the phone. The line was dead. She punched another line. Then another. No dial tone. All four lines were dead.

Dread settled in the pit of her stomach as heavy and solid as a rock. Her mouth went dry. Pulse pounding, she ran toward the employee lounge to get her cell phone and keys. Something was coming. She had to escape!

As she rounded the corner, she reached for the ID tag clipped to the collar of her lab coat. When she reached the door, she swiped her badge. The digital lock blinked yellow. She punched in her personal security code and placed her palm over the scanner. The lock blinked green.

Unaware she’d been holding her breath; she exhaled noisily and pushed open the door. When she reached her locker, her fingers fumbled over the combination, getting it wrong twice before finally hearing the telltale click. Hands still shaking, she pulled off the lock and dropped it to the floor. Metal thunked against tile, sounding like a gunshot. She jumped, stifling a scream as she jerked open her locker and grabbed her purse.

As she ran back toward the lobby, she pulled out her cellphone and dialed 911. She hit send. Nothing happened.

“Shit. No signal.” She dropped her Smartphone back into her bag.

Shaking with terror, she stood before the plate glass door, fumbling through her purse, trying to find her keys. Air stirred behind her. Warm breath touched the back of her neck.

Slowly raising her chin, she stared at her reflection in the dark glass. No one stood behind her. But she wasn’t alone.

A smoky haze shrouded the blue-gray mountains surrounding Asheville, North Carolina as Detective Amber Buckley slid from the passenger seat and met her partner at the hood of the car. She had more investigative experience, but she’d let him take lead in the Lifeblood slayings. Reid Sheridan had an ego, and this
was
the south. She could play along. Up to a point. But she was about ready to call it a day, and her patience was growing short.

The late afternoon sun cast long shadows over the parking lot, and the sweet fragrance of honeysuckle tinged the humid air. The crime scene tape had been taken down months ago, and the employees had returned to work as usual. Birds sang above the distant sound of traffic and nothing disturbed the peaceful tranquility of the day. And yet, something about the tissue bank turned research facility raised the fine hairs on the back of Amber’s neck.

Without warning, her pulse jumped as a wave of dizziness washed over her. She took a deep breath and then another, trying to slow her spinning head.

Was she having another episode—a precursor to a full-blown anxiety attack?

Struggling to keep up with Reid, her gaze swept the parking lot, hoping to find a cause for her anxiety—hoping her partner wouldn’t turn around and notice her shaking limbs or the sweat on her brow.

This wasn’t Iraq. Or—

The relaxation technique slowed her heart rate. She drew in a slow, even breath, forcing her shoulders down and away from her ears.

“I hate that we have to do these follow up interviews,” Reid said as they approached the front entrance to Lifeblood of America. “Makes me feel like a flunky.”

“I prefer doing the follow up interviews,” she said, forcing herself to remain calm. “In the initial investigation there isn’t much to go on but instinct and that first visceral reaction to the crime scene. Now, we have a trail of evidence and prior statements.”

And no dead bodies…or blood
.

Memories of Iraq weren’t the only nightmares haunting her.

A shiver snaked down her spine as she reached for the door. Reid got to it first.

“It’s a shame the murders didn’t occur in our district,” he grumbled. “I don’t like getting Daniels’ and Tanner’s sloppy seconds.”

Amber slapped her palm flat against the glass before Reid could pull open the door. “How can you be so callous? Two people are dead and another is missing.”

“Yeah, well, you got your experience in Iraq. I need this. You don’t. And it’s not like I can bring the vics back to life.” He curled his fingers around her wrist and peeled her hand from the door.

Biting back a sharp retort, she balled her fingers into fists and followed him inside.

Okay, so maybe Reid was just overly ambitious. She got that. He wanted more homicide experience before applying to the NYPD. But he wouldn’t get it in Asheville. The city only had about eight homicides a year and the detectives with the department’s Criminal Investigation Unit were assigned to geographic patrol areas. Amber and Reid worked the Adam District, which covered the northwest area of the city. The Lifeblood Slayings occurred northeast of the city in the Baker District.

The Yankee Club by Michael Murphy
GROOM UNDER FIRE by LISA CHILDS,
Into the Woods by Linda Jones
The Orphans of Race Point: A Novel by Patry Francis
The Binding Stone (The Dragon Below, Book 1) by Don Bassingthwaite
My Days by R. K. Narayan
Omensent: Revealing the Dragon (The Dragon Lord Series) by Gibbons, Barry
Therapy Ever After (Therapy #1.5) by Kathryn Perez
The Life and Loves of Lena Gaunt by Tracy Farr
Sweeter With You by Susan Mallery
Our partner