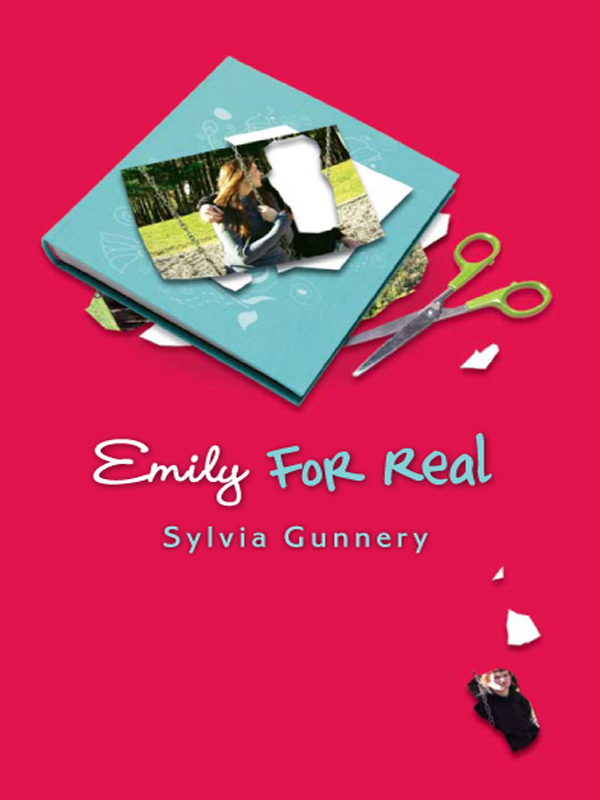 All rights reserved. No part of this publication may be reproduced, stored in a retrieval system or transmitted, in any form or by any means, without the prior written consent of the publisher or a licence from The Canadian Copyright Licensing Agency (Access Copyright). For an Access Copyright licence, visit
www.accesscopyright.ca
or call toll free 1.800.893.5777.

Manufactured by Webcom. Printed in Canada.

I acknowledge, with much appreciation, the opportunity to dedicate time to this book in its early stages during my three months as writer-in-residence with the Nova Scotia South Shore Public Libraries. I also thank the Canada Council for the Arts and the Writers' Federation of Nova Scotia for their support.

Throughout the development of Emily's story, I was encouraged by students in Bob Hazelton and Paula Munro's English 10 Plus classes at Forest Heights Community School in Chester Basin, Nova Scotia. I thank them for believing in Emily and Leo, as well as for sharing their own fictions in our writing workshops.

I thank Theo who walked into my high school English class several years ago, criticized Shakespeare as being “a pervert,” soon became my friend, and then stayed on in my imagination as Leo in this novel.

Gail Winskill took my manuscript and quickly moved it along the path to publication, all the while asking the right questions, offering precise and valuable commentsâ¦and listening. Thank you, Gail.

â¦I've spent summers watching satellites thinking they were stars and who knows what it is you are.

âSue Goyette, “So Quite New”

I suddenly know exactly what I have to do. It's more like an impulse than a plan because right now my brain's on shutdown. I go to the bottom drawer of my desk and dig out my photo album that's mostly filled with pictures of Brian and me. I pick up the scissors and take everything over to my bed. My heart's squeezed tight and I'm shaking inside.

Then I start. Page by page, picture by picture, I remove any ones that have Brian in them. If it's just him, I cut a clean diagonal right across the middle, letting one half fall dead on the bed and throwing the other half on top of the pile. If it's a picture of him with me, I carefully slice him off, and for some reason I save the piece with me in it.

After a while, there's a pile of Brian corpses lying there staring at nothing, and the pages of my album are all patched up with slices and triangles and scraps of pictures of me. In every one of these sliced-up pictures, I look stranded. Like there was an earthquake and I'm left on the edge of some kind of half-destroyed world.

I know I'll have to get rid of the sliced-up pictures of Brian before anyone sees them and has a chance to know how truly crazed I am.

People think I'm depressed because of Granddad. I'm not. Today was his funeral, but I wasn't close to Granddad even though I'm his only grandchild. You know how some grandfathers sit in big chairs and read you stories while you stare at the pictures and suck your thumb, or how they let you comb their hair, even if there's not much hair to comb? Granddad is a different species than that. Was.

If this was a movie about me and it was the opening scene, a funeral would be perfect. The funeral of my relationship with Brian.

Then Granddad had a heart attack and died watching golf on TV, so I haven't told anyone about Brian. And I already know that life has its ups and downs, that there's more fish in the sea, that love can be cruel, and any other clichÃ© that's supposed to make you feel good but only makes you want to puke.

Dad and Aunt Em are having a reception-slash-party so people can pay their respects to Granddad. Meredith would've been the only one who really had any respects to pay, but she doesn't actually remember that she was married to him. When we went to the nursing home so Dad could tell her that Granddad died, all she said was, “Is it raining out?” Then she said to me, “Emma, go look and see if it's raining.”

I don't mind when she calls me Emma. She's not confused saying Aunt Em's name instead of mine. She actually thinks I am Aunt Em. Dad says Meredith loves them both as much as any mother would love her own children. I believe him.

I always knew how my Grandmother Rita died. No one told me about it, like,
Come here, Emily, sit down and I'll tell you what happened the day your grandmother died
. But Dad and Aunt Em talk about it a lot, even though they were only five when it happened. They don't remember much, except about how sunny and warm it was for January and how she was alone in the car and how the car smashed into one of those supports for the overpass. When they got home from school for lunch, she wasn't there. The accident was happening around the time they were knocking on the door and shouting, “Mom! Mom!” over and over and wondering where she was. Ironic.

Granddad married Meredith just before Christmas that year. Lots of times Dad says to Mom that who could blame him with two five-year-old kids to look after.

And then Mom says, “Couldn't be responsible for you and your sister for even a year without finding a woman to do the job for him.” It's no secret that Mom doesn't like Granddad much. Didn't like.

I'm standing here at the front door looking out through the screen, thinking about how normal a day seems to be when actually nothing's normal at all.

A taxi stops and a woman is in the back alone. She looks pretty old. The cab driver helps her out of the car.

She smiles when she gets close to me and says, “Oh, you must be Emily. Your grandfather told me all about you.”

When she's all the way into the front hall, Dad comes out of the living room and I can see right away that he doesn't know who she is. He gets this half-smile on his face like he thinks he's supposed to know her.

I almost say she must be writing a book about our family. But like lots of things I almost blurt out, I manage not to.

Dad's forehead is crinkling up and I can tell he still has no clue who this person is.

“I'm Cynthia Maxwell,” she says and shakes Dad's hand. “I'm a friend of your father's. I worked in Karl's office in that small house on Maple Street. That was years ago, of course. Before the new building on Victoria Street.”

“My husband and I moved to Montreal,” she says. Montreal. “But Karl and I have kept in touch over the years. Karl was always very thoughtful. Very reliable.”

So finally Mrs. Maxwell's in a chair and she has a cup of tea with a small plate of sandwiches. I sit down by her while Dad and Aunt Em walk around, making sure everyone has coffee or tea. Mom's refilling plates with sandwiches or squares, rearranging stuff so the plates don't look so picked over.

“For some reason, I've been thinking about her today, even though I never met her because she died years and years before I was even born. Granddad must have gone into shock when she died like that.” But I don't say, that as far as I could see, he stayed in shock all his life because he sure didn't talk about Rita, and he sure didn't act like much of a father or grandfather.

“It was a terrible thing to bear,” she says. “Life can be cruel.”

“But there are things we can't change and that we have to accept.”

“No. No sweets. I have to watch the sweets.”

And I see her watching sweets. Staring at a huge plate of them in her kitchen, wherever she lives. There are so many sweets on the plate they're stacked high and some are falling off. I'm losing my mind.

“There's something I've always wondered about when my Grandmother Rita died,” I say.

She looks at me like I'm going to reveal the most important revelation.

“How come she was driving that far from the city when she knew Dad and Aunt Em would be coming home from school for lunch, and she was supposed to be home when they got there?”

Her sandwiches are gone and her teacup is empty. She just sits there.

So I say, “But I never asked anyone about that because I thought it would hurt their feelings. Because she wasn't home when she was supposed to be looking after her children.”

And I can't tell if that means she couldn't remember anything about the accident, or whether it didn't much matter anyway because Rita is dead and now Granddad is dead and probably she's thinking her turn's next. Dad said to Aunt Em the day Granddad died, “We're orphans now, Emma.”

Mrs. Maxwell doesn't stay very long. It's strange that she didn't ask any questions about our family. But like she said, she and Granddad kept in touch over the years so she probably already knew everything.

“What do you make of her?” Aunt Em's washing cups and saucers and Dad's drying them. Mom's gone to lie down now that the reception is finally over. I'm arranging leftover sandwiches and squares and cookies in plastic containers, thinking I don't want to take any of this stuff to school for lunch. Not because it was funeral food. Anything leftover should have a salmonella sign stamped on it.

Aunt Em says, “I don't remember Dad ever talking about a Cynthia Maxwell, do you?”

“Granddad didn't talk about anyone he used to know,” I say a bit sarcastically.

“That's not true. He talked about lots of people from his past.”

“But no Cynthia Maxwell or Mr. Maxwell,” I say, like I have a point to prove. Dad just gives me a look and I realize I'm talking like this because I'm getting frustrated with this whole Brian-death-funeral-reception week. “Maybe Meredith knows her,” I say as a peace offering. Sometimes if you say a name, Meredith connects the dots.

“It's been an emotional four days,” says Dad.

Aunt Em hangs the wet dish towel on the oven door. “Be nice to be home and put my feet up.” And have a smoke, she doesn't say. “Blanche is probably meowing at her empty dish.”

Then she comes over and gives me her usual kiss on the cheek, and I give her a hug, thinking I'd like to tell her about Brian, but it isn't really the right time and place, as Mom would say.

After she leaves I go to my room and listen to music and picture Brian talking slow French to this girl in
Montreal
and her giggling when his accent sounds English and his smile and brown eyes and just the way he tilts his head sideways when he's kissing. His soft soft lips and how sweet his breath smells. The pressure of his mouth and how he sometimes moans and pulls me in closer, tighter.

Crying is not cathartic.

The Lion and the Rose by May Sarton
The Name of the Blade, Book Two: Darkness Hidden by Zoe Marriott
Demon Demon Burning Bright, Whisperings book four by Linda Welch
Shut Up and Kiss Me by Christie Craig
What the Duke Wants by Kristin Vayden
Lost Woods by Rachel Carson
Blancanieves debe morir by Nele Neuhaus
Clockwork Twist : Missing by Emily Thompson
How to Meditate by Pema Chödrön
Journey Through Fire by Maya Snow
Our partner