Encyclopedia Brown Gets His Man (3 page)

BOOK: Encyclopedia Brown Gets His Man
>>DOWNLOAD HERE >>READ ONLINE NOW
ads
He had caught three fish humming
The Muffin Man
and four with
Rock-a-Bye-Baby.
However, Encyclopedia noticed Benny was the only boy using shrimp, not worms, for bait.
“It has to be the bait,” thought Encyclopedia. “Benny’s singing is even worse than his snoring.”
Charlie Stewart got a fire blazing, and Pinky Plummer fried the fish. After eating, the boys sat around the fire talking baseball for three hours. Then they turned in.
Encyclopedia had Benny for a tentmate. Benny lay down in his bedroll, barefaced.
“Haven’t you forgotten something?” asked Encyclopedia, horrified.
“My strap!” cried Benny, feeling his nose. “I left my strap at home!”
“Well, it doesn’t matter,” said Encyclopedia bravely. He did not want to hurt Benny’s feelings by passing out the cotton before Benny was asleep.
In no time at all, Benny began to snore for all he was worth.
Encyclopedia opened the box of cotton and gave some to each boy. They plugged their ears. It didn’t help.
“Looks like a long night,” moaned Charlie Stewart. “Benny’s giving it both nostrils.”
Encyclopedia lay down with his ear next to Benny’s ear. He reasoned that he was thus as far from the terrible snorts, sneezes, and rasps as Benny himself, and Benny was gloriously asleep.
Reason, however, was no match for Benny’s nose. After half a minute, Encyclopedia squirmed to the far side of the tent and groaned quietly.
One by one the boys fell asleep from sheer weariness. By two o’clock in the morning, Encyclopedia’s ears felt black and blue. He pocketed his flashlight and went out for a walk in the cool night air.
As he reached the dirt road, a car suddenly appeared. It moved slowly. Encyclopedia stopped and observed the car from behind a tree. The road curved, but the car continued straight on.
The driver jumped out as the car crashed through the railing. He watched the car roll toward the ocean. Then he smoothed a place in the dirt and lay down.
“Help!” he hollered. “Help! My back! Somebody help me!”
Several campers rushed from the woods and crowded around him. Encyclopedia walked to the point where the car had gone off the road and flashed his light down the rocky slope.
The car had stopped halfway down between the road and the ocean. It rested on its top, a complete wreck. About the only things undamaged were the four worn-out tires. They still spun in the air.
All at once the rocks beneath the car gave way. The car slid into the water and disappeared below the surface.
“The driver’s name is Matthew Starr,” said Chief Brown at dinner that evening. “He claims he fell asleep at the wheel and woke up just in time to escape going off the road with the car.”
“I told you what really happened!” protested Encyclopedia.
“You were the only witness,” said Chief Brown. Mr. Starr’s lawyer will say it was dark and that you were not fully awake.”
“Somebody ought to shove his lawyer into a pup tent with Benny Breslin,” muttered Encyclopedia.
“The car was brand new and cost six thousand dollars,” said Chief Brown. “Mr. Starr wants the insurance company to pay him for it. But more important, he says he hurt his back in the accident and can’t work any more.”
“A doctor can prove he’s faking the injury,” said Encyclopedia.
“I’m afraid not,” said Chief Brown. “Bad backs are a kind of injury that can’t be disproved. Mr. Starr has a big policy with the insurance company. It will pay him money each month for the rest of his life if he can’t work.”
“The insurance company wants you to prove he wrecked his car on purpose. Then the insurance company won’t have to pay him anything. Is that right?” asked Encyclopedia.
“Yes,” replied Chief Brown. “But we can’t get heavy machinery onto the dirt road to pull the car out of the ocean. Even if we could, I don’t know what we would find to prove Mr. Starr wrecked his car on purpose.”
“I know,” said Encyclopedia.
WHAT HAD ENCYCLOPEDIA SEEN?
The Case of the Whistling Ghost 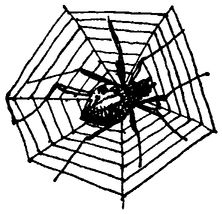 Fabius Manning crawled slowly into the Brown Detective Agency.
Encyclopedia was in no way startled to see Fabius so close to the ground. During the summer, Fabius usually went about on his hands and knees.
Fabius studied bugs of all kinds. Nobody in Idaville knew more about the hidden desires of bee or beetle than Fabius.
Encyclopedia watched Fabius peering through a magnifying glass till the excitement grew unbearable.
“What is it?” Encyclopedia asked. “A
Coleoptera?”
“Wrong,” whispered Fabius, sneaking forward an inch.
“A
Dendroleon obsoletus?”
“Wrong again,” whispered Fabius. “A common stinkbug—ooops! You scared him off!”
“Sorry about that,” said Encyclopedia.
Fabius arose sadly. But upon looking around and discovering where he was, he cheered up at once.
“Encyclopedia! Boy, I’m glad that bug led me here.” He put twenty-five cents on the gasoline can. “I’ve been meaning to hire you.”
“No case is too small,” said Encyclopedia, hoping Fabius didn’t take him at his word. Fabius might want a horsefly brought to justice. “What’s the problem?”
“Somebody stole my camera,” said Fabius. “I think the thief was a ghost.”
Encyclopedia swallowed hard. “A g-ghost?
Where?
”
“In the old deserted Morgan house,” said Fabius.
Encyclopedia recovered himself quickly. “I don’t believe in ghosts. I believe in facts.”
“The facts,” announced Fabius. “Yesterday I went into the old house to hunt interesting bugs. I was about to photograph a spider when this ghost came down the stairway.”
“You got the shakes and ran out of the house, leaving the camera behind?” said Encyclopedia.
“Right,” said Fabius. “I raced out the front door so fast my own mother wouldn’t have known me from a flying tank. An hour later, I went back for my camera. It was gone.”
“Did you notice anything special about the ghost?”
“It was white as a sheet,” said Fabius. “And it was making scarey noises and whistling at the same time.”
“It might have been a dog trainer in life,” suggested Encyclopedia. “Let’s go to the old Morgan house and look around.”
Fabius got his bike, and the two boys rode to the “haunted” house. On the way they passed the home of Rocky Graham, one of Bugs Meany’s Tigers.
Two blocks farther on was the old Morgan place. The big house had not been lived in for fifty years. It was a rotted wood building looking for a place to fall down.
The boys leaned their bikes against a pine tree. They walked through the hip-high grass and weeds, up onto the creaky front porch, and into the entrance hall.
“I left my camera at the foot of the stairs while I explored,” said Fabius. “When I came back for it, there was the ghost, wailing and whistling.”
He led the way into the kitchen.
“I wanted to photograph that!” he said, pointing to the back door.
Encyclopedia gasped in admiration. Across the lower half of the door a spider had spun a beautiful, wheel-shaped web.
“The best example I ever saw of the work of a
Theridiosoma radiosa—otherwise
called a ray spider,” said Fabius in a glow. “The work of a ray spider,” said Fabius.
While Fabius adored the spider web, Encyclopedia returned to the entrance hall. He found footprints in the heavy dust on the staircase.
“Ghosts don’t wear shoes,” he thought out loud. “At least not in the summer.”
“How’s that?” called Fabius. “Did you find a clue?”
“Your ghost left footprints,” said Encyclopedia as Fabius hurried from the kitchen. “I think I know who it was.”
“You’re smarter than the FBI!” exclaimed Fabius. “Who was it?”
“A boy who saw you come here with your camera yesterday,” said Encyclopedia. “Rocky Graham.”
“Aw, a lot of people could have seen me go into the house yesterday,” said Fabius, disappointed. “Why Rocky Graham?”
“Because he lives close to this old house; because he’s a member of the Tigers; and because he knocked out two front teeth a few days ago trying to break into a parked car.”
“I heard that his screwdriver slipped and hit him in the mouth,” said Fabius. “But what have two missing front teeth got to do with it?”
“Without his two front teeth,” explained Encyclopedia, “whenever Rocky says the letter S, he
whistles
.”
“The ape!” bellowed Fabius, hopping up and down in anger. “That rat in a bedsheet!”
“Take it easy,” said Encyclopedia. “We haven’t any proof—yet. I want to hear what Rocky has to say for himself.”
When the two boys arrived at the Graham house, Rocky was sitting on the ground groaning. He had just aimed a kick at a cat and missed, twisting his ankle.
“You dressed up in a sheet and scared me in the old Morgan house yesterday,” said Fabius.
“Then you stole his camera,” said Encyclopedia. “I’ll bet a lot of people saw you go up the front porch. So don’t deny it!”
Rocky’s face showed how hard he was struggling for a fast alibi.
“Sure,” he said, whistling a little. “Sure I saw you go inside. Another kid, carrying a sheet, went in just behind you. Pretty soon you came sailing out. I went inside to find out what was the matter. In the entrance hall I saw this other kid pick up a camera. When he spotted me, he ran out the back door and into the woods.”
“That’s a good story,” said Encyclopedia. “Good enough to prove you were the thief!”
WHY? The Case of the Explorer’s Money
“You haven’t touched your breakfast, dear,” said Mrs. Brown. “Is something wrong?”
“I’m not hungry,” replied Chief Brown. “I’m worried.”
“About a case?” asked Encyclopedia.
“Chief Walker of Glenn City wants me to help him recover fifty thousand dollars,” said Chief Brown.
“Wow! Did someone rob a bank, Dad?”
“No, the money belonged to Sir Cameron Whitehead, who died last month. He was the famous Arctic explorer.”
“Arctic—let’s see,” said Mrs. Brown. “That means just the North Pole region and not the South Pole area, doesn’t it?”
“Yes, that’s right,” said Chief Brown. “Sir Cameron never went to the South Pole.”
“But he made eleven trips to the North Pole,” said Encyclopedia.
“Sir Cameron retired to Glenn City three years ago,” said Chief Brown. “The money was stolen last month while he lay sick and dying. The Glenn City police still haven’t found a clue.”
Chief Brown drew a heavy breath. “Chief Walker of Glenn City thinks I can work a miracle. He expects me to capture the thief
presto!
”
“Why can’t you?” asked Mrs. Brown. “You have a helper.”
Chief Brown grinned.“ Want to help, Leroy?”
“Go with you? Boy, would I!” exclaimed Encyclopedia. “I’ll telephone Sally Kimball and tell her to look after the detective agency for the day.”
ADS
15.4Mb size Format: txt, pdf, ePub