Encyclopedia Brown Gets His Man (6 page)

BOOK: Encyclopedia Brown Gets His Man
>>DOWNLOAD HERE >>READ ONLINE NOW
ads
“Did the twin cheat?” said Sally.
“The
twins
cheated,” said Encyclopedia.
WHAT MADE ENCYCLOPEDIA
SO SURE?

The Case of the Murder Man
Cicero Sturgess, the greatest child actor in Idaville, entered the Brown Detective Agency. He bowed low.
“Your Majesty,” he said.
“Huh?” said Encyclopedia.
“Your Majesty—that’s the opening line of my play,” said Cicero. “Trouble is, I can’t think of a second line.”
“Well, you’ve made a wonderful start,” said Encyclopedia encouragingly. “Have you got a title?”
“Murder Man,”
said Cicero. “It’s for the Children’s Interfaith Night at First Church on Saturday.”
“A play about murder?” asked Encyclopedia, astonished. “Wouldn’t a play about
Sleeping Beauty
be better for church? Benny Breslin could do the snoring.”
“I’m not joking,” said Cicero. “Reverend O’Meara said I could put on a murder play if it wasn’t too messy.”
“Drownings are very clean,” said Encyclopedia. “Fit concrete shoes on the victim and toss him overboard—”
“I’m allowed one shooting,” interrupted Cicero. “But what good is even one? My mother won’t let me touch a cap pistol. Imagine me, the star, pointing a pistol and having to shout, ‘Bang! Bang! ”’
“You could use a silencer on the gun,” suggested Encyclopedia. “Nowadays, all the murderers use silencers.”
“That’s the answer!” said Cicero jubilantly.
Then his expression drooped.
“Carole and Marla Kenin are going to tap dance,” he said. “Ted Holquist will do bird imitations. Percy Arbuthnot will recite
The Highwayman.
There will be other acts, but the play will be the main attraction.”
“And you have only a title and an opening line,” said Encyclopedia.
“Writing is hard work,” moaned Cicero. “I need a little help.”
Encyclopedia knew what was coming next.
“Write a murder mystery—with me as the star,” pleaded Cicero. “I’ve got a great idea! Let the audience try to figure out how the detective solved the crime! ”
“That’s a corny idea,” objected Encyclopedia.
Still, Encyclopedia wanted to do his share at the Children’s Interfaith Night. So after dinner he wrote what Cicero wanted. The play had an intermission so that the audience could try to guess the solution. It had one shooting. And it starred Cicero.
Saturday evening Encyclopedia sat in the Fellowship Hall of First Church. He was nervous as any author on opening night.
After Ted Holquist finished his bird calls, Sally Kimball carried out a big sign. It read:
MURDER MAN
By Leroy Brown
Cicero Sturgess as Langley
Pinky Plummer as Frazer
Hank Jones as the Detective
Jim Dunn & Phil Cord as Policemen
The lights went out. The curtain parted.
The scene on stage showed the inside of two apartment rooms at night. Between them was a hall with a window and a door marked “Stairs.”
In one apartment Frazer was reading a newspaper. Across the hall in the other apartment, Langley was putting on a pair of black gloves. He picked up a pistol and slipped noiselessly out the door. He tapped softly on Frazer’s door.
“I hope I’m not disturbing you,” said Langley as Frazer opened the door. “I thought we might play a game of chess. Are you alone?” 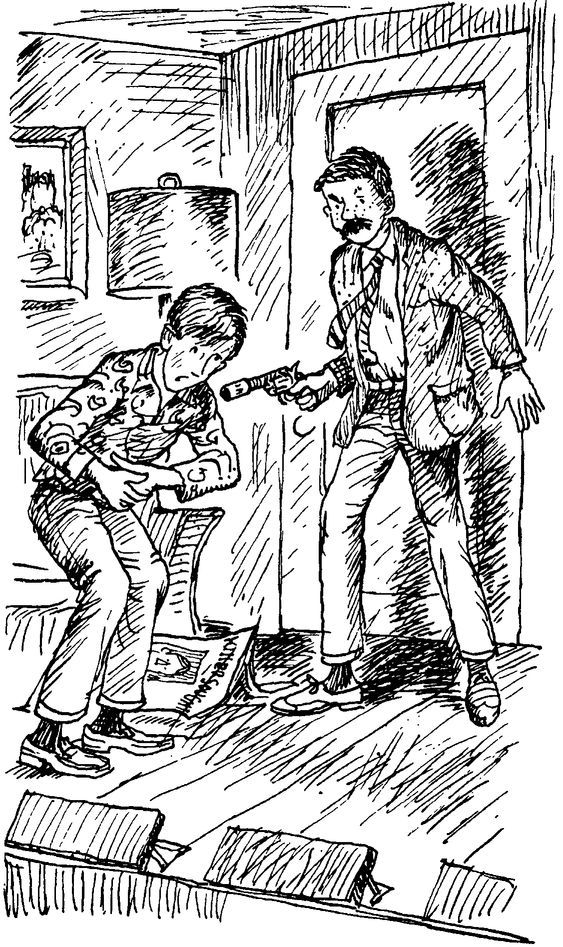 Langley pulled out the gun.
“I’m alone,” said Frazer. “I’ll get the chess set.”
Langley stepped in and closed the door behind him. He pulled out the gun. The silencer muffled the noise of the shot.
Frazer doubled over and fell to the floor dead.
Langley moved swiftly. He took a key from Frazer’s pocket. He unlocked Frazer’s desk and scooped out a bundle of cash.
Then he coolly telephoned the police.
“Hello? My name is Langley,” he said. “I’m telephoning from the apartment of Mr. Frazer at six hundred Grand Street. Frazer’s been shot!”
Hanging up, Langley slipped from Frazer’s apartment. He threw the gun out the hall window and stepped into his own apartment.
Smiling, he removed his black gloves. The money he hid under his mattress.
When a detective and two policemen arrived, Langley was waiting for them in the hall by Frazer’s open door.
“I’m Langley,” he announced.
“Oh, yes. I spoke with you on the telephone,” said the detective. “What happened?”
“It was too hot to sleep,” began Langley. “So I decided to go out to a late movie. As I stepped into the hall, a man dashed out of Mr. Frazer’s door. He knocked me down, tossed the gun out the window, and raced downstairs. I saw Mr. Frazer through the open door. Finding him dead, I called you immediately.”
After examining the body of Frazer, the detective asked, “May I use your phone?”
“Go right ahead,” said Langley.
The curtain fell. The lights in the Fellowship Hall went on.
The detective stepped from behind the curtain. He stopped at the edge of the stage and spoke to the audience.
“I had every inch of the dead man’s room gone over for fingerprints,” he said. “Everything was photographed, including the desk. The bullet that killed Mr. Frazer matched the gun found on the street below the hall window.”
The detective looked around the audience.
“After studying all the reports, I arrested Langley for murder,” he said. “Can anyone tell me what his mistake was?”
ONLY ONE GIRL KNEW. DO YOU? 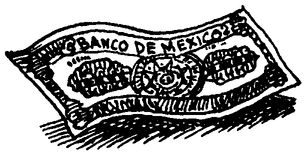 The Case of the Million Pesos
Encyclopedia solved mysteries at the dinner table. He solved mysteries in the garage. He solved mysteries at the scene of the crime.
There were no other places in Idaville, he thought, to solve mysteries.
He was wrong.
There was second base.
While sitting on second base, he solved a robbery that had taken place in a country a thousand miles away.
Encyclopedia got his start as an international detective during an evening baseball game. His grounder slipped through Benny Breslin at short-stop. Encyclopedia wound up with a double.
Tim Gomez, the next batter, ended the inning by striking out. The game was immediately called on account of darkness. The score was 12 to 3.
Encyclopedia sat down on second base, discouraged. Benny Breslin flopped upon the grass beside him.
“We were going good,” said Encyclopedia. “All we needed were nine runs to tie.”
“I’m glad they stopped it,” said Benny, a home-run hitter. “I’ve raced around the bases five times. My legs are falling off.”
Sally walked over from first base. She looked troubled.
“What’s bothering Tim Gomez?” she asked Encyclopedia. “He struck out six times in a row. Something is on his mind.”
“Baseballs,” said Benny. “He fielded every fly with the top of his head. He didn’t catch one all game.”
“Be quiet,” whispered Encyclopedia, for Tim was passing near them.
“Sorry,” Tim apologized. “I played like a cow on crutches.”
“Forget it,” said Encyclopedia.
“Aren’t you feeling well?” asked Sally.
“I’m worried about my uncle, Duffy Gomez,” said Tim. “He’s in jail in Mexico City.”
Duffy Gomez, Mexico’s greatest baseball player, in jail! Encyclopedia, Sally, and Benny were stunned by the news.
“What did he do?” asked Benny.
“The police say he robbed a bank,” answered Tim. “But I don’t believe it!”
“What does your uncle say?” asked Encyclopedia.
“He says he’s innocent,” replied Tim. “The police threw him in jail just the same. He’s being framed!”
“By whom?” asked Sally.
“By a man named Pedro Morales. He’s hated my uncle for years,” said Tim. “Pedro was in love with my Aunt Molly. She turned him down to marry Uncle Duffy.” 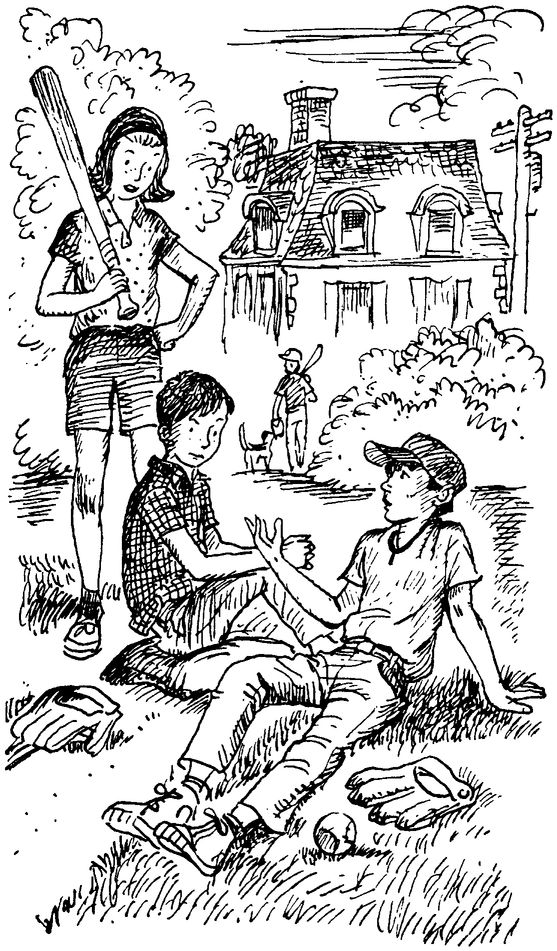 “He says he’s innocent,” replied Tim.
“So Pedro accused your uncle of robbing a bank,” said Sally. “What a low way to get back!”
“Doesn’t your uncle have an alibi?” asked Encyclopedia. “Can’t he prove he was somewhere else when the bank was robbed?”
“He was at a movie. Nobody saw him, though,” said Tim. “Uncle Duffy wears a fake beard when he goes out in public. If he didn’t disguise himself, baseball fans would mob him.”
“Being at a movie is a pretty weak alibi,” said Encyclopedia regretfully. “Your uncle will have a hard time making a judge and jury believe him.”
“The real robber is bound to be caught,” said Sally. “Don’t you worry, Tim.”
“There isn’t much time left,” said Tim. “Uncle Duffy goes on trial next week. Pedro will testify against him.”
Sally glanced at Encyclopedia for help.
“Don’t ask me,” mumbled Encyclopedia.
“You
can’t
say no,” urged Sally. “Give it a try, Encyclopedia!”
“I can tell you everything about the case,” said Tim eagerly. “I’ve read the newspaper stories my uncle sent from Mexico.”
Encyclopedia considered the problem; namely, trying to solve a bank robbery in Mexico while sitting on second base in Idaville.
“You can’t do Tim’s uncle any harm,” said Sally.
Encyclopedia couldn’t argue with that. “You win,” he said. “Tell me what you know, Tim.”
“The National Bank of Mexico City was robbed last month by two masked men. They got away with a million pesos in one-peso bills,” said Tim.
“That’s about eighty thousand dollars,” exclaimed Encyclopedia.
“Two weeks later,” continued Tim, “Pedro Morales says he passed my uncle’s house. It was late at night. There was a light in the living room. Pedro says he saw my uncle arguing with another man.”
“Did Pedro overhear what was said?” asked Encyclopedia.
“Yes, the window was open,” replied Tim. “Pedro claims my uncle said that he had counted the money again that afternoon. His share wasn’t half the million pesos—it was a thousand pesos short.”
“What happened next?” said Sally.
ADS
15.4Mb size Format: txt, pdf, ePub