Encyclopedia Brown Gets His Man (7 page)

BOOK: Encyclopedia Brown Gets His Man
>>DOWNLOAD HERE >>READ ONLINE NOW
ads
“According to Pedro,” said Tim, “the other man got excited. He threw some money into my uncle’s face and shouted, ‘There’s a thousand pesos. I never want to see your ugly face again! ”’
“How did Pedro know they were talking about the stolen money?” asked Encyclopedia.
“Pedro says he didn’t know—then,” replied Tim. “Some of the one-peso bills the man threw at my uncle flew out the open window. Pedro picked them up. On a hunch, he brought them to the police. The numbers on the bills proved they were stolen from the bank.”
“If Pedro had some of the stolen money,” said Sally, “he must have had something to do with the robbery himself!”
“I agree,” said Encyclopedia. “Pedro lied. His story just doesn’t add up!”
WHAT WAS PEDRO’S LIE?

Solution to The Case of the Marble Shooter
Bugs Meany said he had never seen the marble shooter “before in my life.”
Yet when Duke Kelly and Spike Larsen asked who he was, Bugs said he was “Algernon Kehoe.”
That was Bugs’s slip!
For when Encyclopedia spoke with Bugs in the clubhouse, he called the marble shooter “Al Kehoe.”
“Al” is short for many names. A few are Albert, Aldrich, Alfonzo, Alfred, Alister, Alton, and Alvin.
Bugs could not have known—unless he had met Algernon before—that “Al” was short for Algernon. 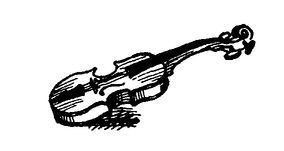 Solution to The Case of Bugs Meany, Detective
Bugs claimed that it was the strange action of the squirrel which led to his finding the violin.
The squirrel, said Bugs, “backed down slowly” from the tree.
That was Bugs’s lie!
Squirrels
never
back down a tree.
They always come down a tree headfirst!
Told this fact, Bugs admitted stealing the violin.
Not only didn’t Bugs get the expected reward of ten dollars, he had to return Mario’s twenty cents.
And that night he closed his detective business for good.

Solution to The Case of the Underwater Car
Encyclopedia had seen “four worn-out tires” on Mr. Starr’s car.
The car, however, was “brand new.”
Mr. Starr had outsmarted himself!
He had removed the new tires in order to sell them. Then he had put old tires on the car and wrecked it. He had chosen a spot where the car could not be recovered from the ocean.
He thought no one would find out. But he had not counted on Encyclopedia.
Acting on Encyclopedia’s information, Chief Brown had divers bring up the old tires.
When he saw them, Mr. Starr confessed.

Solution to The Case of the Whistling Ghost
Rocky made up “the other boy.”
The other boy could not have run “out the back door and into the woods” with the stolen camera, as Rocky claimed.
Remember the spider web which Fabius wanted to photograph? It was spun “across the lower half” of the back door.
Had the other boy really run out the back door, he would have broken the web!

Solution to The Case of the Explorer’s Money
The thief brought eight gifts—the penguins. These he stuffed with the money and placed in the museum.
He came back to the house on the day of the sale. He bought the penguins. He expected them to be shipped to him. But the police arrested him instead.
How had Encyclopedia known where the money was hidden?
The thief made one mistake.
In a room filled with objects from Sir Cameron Whitehead’s trips to the Arctic, only the eight penguins didn’t belong.
Penguins live near the Antarctic, or South Pole—which Sir Cameron Whitehead had never visited—not near the North Pole!

Solution to The Case of the Coffee Smoker
Harry said, “I waited in the truck till the rain stopped. Then I came straight into the kitchen.”
That meant he had to go through the water on either the front or the back walk.
However, his shoes were dry, not wet. He lighted a match off the bottom of one, remember?
When Encyclopedia pointed this out, Harry admitted he had been home all day. He had noticed Roscoe smoking and decided to blackmail him.
Rather than have his father learn he’d been too lazy to inspect the fishing nets, Harry promised not to tell Roscoe’s mother about Roscoe smoking coffee grounds in secret.

Solution to The Case of the Chinese Vase
Marybelle claimed she was in the back yard hosing down the flowers all the time that her mother was gone from the house.
The truck driver, however, had parked so that the hose “was squashed flat” under his tires.
That meant no water was getting through the hose to Marybelle.
But Marybelle did not come to the front of the house to see what was wrong. So Encyclopedia knew she was not using the hose then.
Mrs. Upjohn telephoned the delivery truck company. The driver told her he had parked on the hose, as Encyclopedia said.
Marybelle admitted she had gone into the house to rest. Under her mother’s questioning, she confessed to having knocked over and broken the Chinese vase by accident.

Solution to The Case of the Blueberry Pies
Encyclopedia knew the Thompson twin who finished the race was not the one who had eaten the blueberry pies.
At the finish, the twin had “beautiful white teeth.”
Impossible!
The blueberries in the pie would have stained his teeth blue.
When Encyclopedia reported this to their mother, the twins confessed. They had switched places as the first twin ran past the model-car tent.
Chester was declared the winner. He received the first prize—a pie a day for a month from the Purity Bake Shop.

Solution to The Case of the Murder Man
Although Langley telephoned from Frazer’s apartment, his fingerprints were not on the telephone.
He did not remove his gloves till after returning to his own apartment!
In Langley’s own words, “It was too hot to sleep.” So he had no reason to wear gloves ...
... Except to avoid leaving fingerprints!
ADS
15.4Mb size Format: txt, pdf, ePub

You by Charles Benoit
The Carnivorous Vegan by K.A. Merikan
Across Frozen Seas by John Wilson
A Love Letter from a Stray Moon by Jay Griffiths
The Nutmeg Tree by Margery Sharp
Free Fall by William Golding
No One Writes to the Colonel by Gabriel García Márquez, J. S. Bernstein
When Jesus Wept by Bodie, Brock Thoene
The Man at Key West by Katrina Britt
Dukes to the Left of Me, Princes to the Right by Kieran Kramer
Our partner