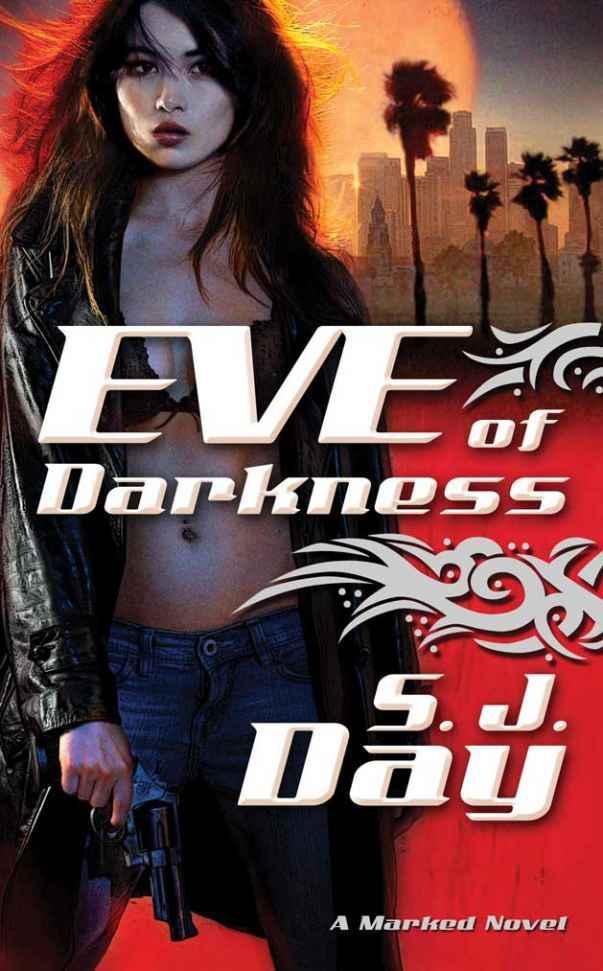 The art department at Tor, especially Seth Lerner. Months of work went into the packaging of the Marked series—design tweaks, background changes, multiple cover models. . . . The amount of time and effort that was invested in the covers means a great deal to me.

Melissa Frain at Tor, Nikki Duncan, and Joy Harris for loving this book and prodding me often to hurry up and finish the other two, which kept me motivated while doing so.

Denise McClain for the extremely thoughtful and helpful feedback.

Jordan Summers, Shayla Black, Karin Tabke, and Sasha White for being there for me whenever I needed a caring ear at the other end of the phone line. How blessed I am to have friends like you!

Gary Tabke for answering my questions regarding police procedures. Any errors are entirely mine.

Frauke Spanuth for her brilliant marketing branding and help with German translation.

Tina Trevaskis for her honesty and friendship.

And Nikola Tesla for the radio, remote controls, and AC power, none of which I could have lived without while writing this book.

A story doesn’t blossom into a published book until it is loved by an editor. A published book doesn’t reach enough readers if it isn’t championed by its editor. An author doesn’t spread her wings fearlessly without the security of a supportive (and patient) editor.

I am grateful to Heather Osborn for her enthusiasm for the Marked series. There is nothing in the world like having an editor whose hopes and dreams for your stories are as limitless as your own.

“Sin is crouching at your door; it desires to have you, but you shall master it.”

The Devil is in the details.

Evangeline Hollis understood the true gist of that saying now, surrounded as she was by thousands of Satan’s minions. Some wore Seattle Seahawks baseball caps, others wore San Diego Chargers jerseys. All bore detailed designs similar to tribal tattoos on their skin that betrayed both what species of cursed being they were and what their rank in Hell’s hierarchy was. To her enhanced eyes, it looked like a damn festival for sinners. They were drinking beer, devouring nachos, and waving giant foam fingers.

In reality, the event was a football game in Qualcomm Stadium. The day was classic Southern California perfection—sunny and warm, the eighty-degree temperature balanced by a delightfully cool breeze. Mortals mingled with Infernal beings in blissful ignorance, simply enjoying a bit of afternoon spectator sport. To Eve, the scene was macabre; like watching hungry wolves sunning themselves alongside lambs. Gore, violence, and death were the inevitable result of any interaction between the two.

“Stop thinking about them.”

Alec Cain’s deep, sensual voice made her shiver inside, but outwardly she shot him a rueful glance over the top of her sunglasses. He was always telling her to ignore their prey when they weren’t on the hunt. As if rogue fae, demons, mages, werewolves, dragons, and thousands of variants of the same were easily disregarded.

“There’s a woman breastfeeding her child next to an incubus,” she muttered.

“Angel.” His nickname for her moved over her skin like a tangible caress. Alec’s voice could turn driving directions into foreplay. “We’re taking the day off, remember?”

She blew out her breath and looked away. At a few inches over six feet, Alec was blessed with a powerful chest and tautly ridged abdomen that were noticeable even through his fitted white tank. He had long, muscular legs presently showcased in knee-length Dickies shorts and biceps so beautifully defined they were coveted by both men and women.

He was her lover . . . occasionally. Like all sweets, Alec was delicious and satisfying, but too much of him caused a sugar crash that left her dazed and reeling. He’d also ruined life as she had known it. Her career aspiration had been interior design, not Infernal bounty hunting.

“If only it was that simple,” Eve groused. “How can I go on vacation when I’m surrounded by work? Besides, they stink even when I’m ignoring them.”

“All I smell is you,” he purred, leaning over to nuzzle his nose against her cheek. “Yum.”

“It creeps me out that they’re everywhere. I went to McDonald’s yesterday and the person serving me at the window was a faery. I couldn’t even eat my Big Mac.”

“Betcha ate the fries.” Pulling down his shades, Alec looked at her with somber eyes. “There’s a difference between staying on your toes and paranoia.”

“I’m cautious, not a basket case. Until I find a way out of this mark business, I’m making the best of it.”

Eve sighed. Having Alec for a mentor was such a bad idea, and not just because it was the equivalent of a Hollywood casting couch in most Marks’ eyes. Never mind that the true “casting couch” was the exchange of sexual favors in return for a position you
wanted
. No one ever wanted the Mark of Cain.

The Marks’ hierarchy started at the bottom with the newbies and topped off with Alec, the original and most badass Mark of them all. There was no way to surpass him. There was also no way to work with him. He was the quintessential loner, the very definition of the word. Yet here was Eve, a six-week newbie in the field, perched solidly at the top because he didn’t trust anyone else to watch her back. She was important to him.

The other Marks thought working with God’s primary enforcer had to be a vacation. While it was true that Infernals didn’t mess with Alec unless they had a death wish, it didn’t make things any easier. Demons now targeted
her
as a way to get to him. To make things worse, Alec had been marked so long that he’d forgotten what it was like to be new and confused. There were things he expected her to simply “know,” and he became frustrated when he realized she didn’t.

He squeezed her hand. “What happened to the girl who just wanted to forget about everything for a couple of hours?”

“That was before she was kidnapped and nearly blown to smithereens.” Eve stood. “I’ll be back. I need to use the little girls’ room.”

As she stood, Alec caught her wrist. Her brows rose in silent inquiry.

“Angel.” He kissed the back of her hand. “When I tell you to stop thinking about them, it’s not because I want you to live in a fantasy world. I just want you to see the good stuff around you. You saw a mother nursing her baby, but you didn’t see the miracle of it. You were too busy looking at the demon next to her. Don’t give them the power to ruin your day.”

Frowning, Eve absorbed his words, then nodded her acceptance. Alec had lived with the mark since the dawn of time and could still see miracles; she could try.

He released her. After inching her way past the other spectators in their aisle, Eve sprinted up the wide cement steps. She still marveled over the speed, strength, and agility that came with the mark burned into her upper arm. She’d always been athletic, but now she was Supergirl. Well . . . she couldn’t fly. But she could jump really damn high. She could also see in the dark and bust through dead-bolted doors, talents she’d never anticipated needing or appreciating.

Eve reached the concourse and followed the signs to the nearest restroom. The line protruded just outside the entrance. Luckily, she wasn’t desperate. More than anything, she’d just needed to get out of her seat.

So she waited patiently, rocking in her flip-flops with her hands in her pockets. An occasional breeze passed by, ruffling through her ponytail. It carried the mingled scent of evil and rotting souls, a pungent stench that made her stomach roil. It fell somewhere between decomposition and fresh shit, and it amazed her that the Unmarked couldn’t smell it.

How had she lived twenty-eight years of her life in complete ignorance? How had Alec lived centuries in complete awareness?

“Mom!” The young boy in front of her was crossing his legs and wiggling madly. “I have to
go
!”

Although the woman looked as if she could be the child’s sister, Eve wasn’t unduly surprised. Many women in Southern California didn’t age. They just became plasticized caricatures of their youthful selves. This one was bleached blonde with a perfect tan, breasts a size too large for her slender frame, and plumped, glossy lips.

The mother looked around.

“Let me go in the boys’ bathroom,” he begged.

Eve guessed the boy was around six years old. Old enough to pee by himself, but she understood the mother’s concern. A child had been killed in a public restroom in nearby Oceanside while his aunt waited outside. The demon who orchestrated that horror had used the oldest trick in the book—pretending to be God.

The harried mother hesitated for a long moment, then gave a jerky nod. “Hurry. You can wash your hands here in the girls’ bathroom.”

The boy ran past the drinking fountains and ducked into the men’s room. Eve offered a commiserating smile to his mom. The line moved incrementally forward. Two teenagers joined in behind her. They were dressed in the predominant fashion of layered tank tops paired with low-rise jeans. Expensive perfume saturated the air around them, which created a welcome relief from the odor of decay. In the stadium, the crowd roared. One of the Chargers’ outside linebackers was a werewolf. From the high-frequency praise of the Infernals in the crowd, he’d done something worth cheering about.