Read Everything We Ever Wanted Online

Everything We Ever Wanted 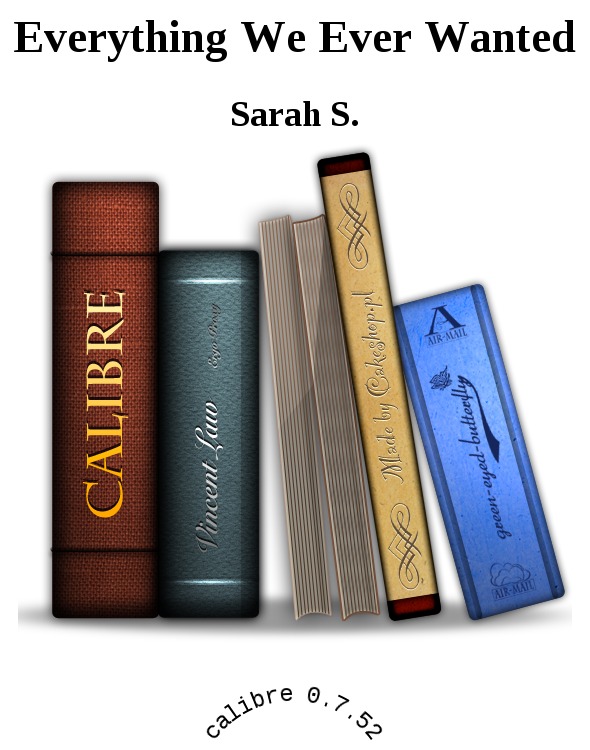 Everything We Ever Wanted

T
he man introduced himself on the phone as Michael Tayson, the new Swithin headmaster. “We haven’t had the pleasure of meeting yet,” he said.
“Ah, yes, of course,” Sylvie said quickly, sitting up straighter. It

J oanna Bates-McAllister—nee Farrow—had heard from the very start that her husband Charles’s adopted brother, Scott, was an asshole. An ungrateful asshole, were the precise words.

Needless to say, they’d never been close. According to her husband, Charles’s delivery had been so painful and dangerous that the doctors had told the Bates-McAllisters that it wouldn’t be safe to conceive again, so they had chosen to adopt. They’d gone through all kinds of hoops to bring Scott into their home. And look how that turned out, was what the entire family seemed to think, though no one ever said it aloud.

Recently, the Bates-McAllisters had willingly converted a whole section of their estate into a bachelor pad for Scott, furnishing it with high-tech electronics, a kitchenette, and even a separate entrance, never encouraging him to leave even though he was twenty-nine years old. Charles told Joanna that Scott didn’t hang out with a single student that went to their private school, Swithin, but instead with kids from public school. And not the public schools in the suburbs, either; Scott gravitated toward kids without parents, kids whose fathers were in jail, kids whose siblings dealt meth.
By the end of high school, Mr. and Mrs. Bates-McAllister’s standards for Scott had fallen so laughably low that they were relieved Scott had made it the whole way through Swithin without getting expelled, developing a drug addiction, or going to prison. Joanna had known lots of Scotts in her day. He was the kind of guy who somehow always had something pithy and painfully intuitive to say, even though he did miserably in school. What a pity, adults would whisper, crossing to the other side of the street when he came near. Wonder what went wrong? Joanna had dated a few watered-down versions of Scott in the past, their self-absorption impossible to crack, their indifference heartbreaking, and their roughness touching something deep inside her. Perhaps that was why she found herself defending him to her husband whenever he complained. Perhaps that was why she blushed whenever Scott came near, her heart drumming like a metronome cranked up to molto allegro.

Despite Scott’s tough exterior, when Charles told her that his brother had been implicated in a boy’s death at school, Joanna could not believe that he would have anything to do with someone’s suicide. Much less encourage … well, whatever had happened.

She tried to imagine what could have been going on? She tried to picture a fluorescent-lit, ripe-smelling wresting room. The boys in a huddle, having lost their match. Scott approaching, the anticipation of a pep talk about how they were going to practice harder and do better next time.

And then, what? Sure, a lot of people had it in them to say, You, you, and you. In the center there. Practice isn’t working, but maybe this will. And then beatings. Horrible humiliations, like Joanna had seen so many times on television. Scars that would never heal. Maybe all that had happened, but Joanna had her doubts about whether Scott cared enough to be that involved. It was high-school wrestling, for Christ sake. Scott didn’t seem to care about anything else; why start with that?

It was possible, she supposed, that he’d heard the boys were performing silly hazing rituals but hadn’t witnessed it firsthand, and so let it slip his mind, figuring the boys would just work it out themselves. Really, who wasn’t guilty of letting things happen without doing the appropriate things to stop them? Once, when Joanna lived in Philadelphia after college, she’d watched out her apartment window as a young guy robbed an old woman. The man knocked the woman to the ground and ran away with her purse—it was black patent leather, with an old-fashioned chain strap—and Joanna just stood stock-still against the kitchen counter, her hand to her mouth. Lately, more and more, Joanna felt as though she was watching her own life pass by without intervening. It was like, she sometimes thought, her true self was becoming smaller and dimmer, and all she could do was stand there, her hand at her mouth, simply staring.

Joanna and Charles had been in bed when Sylvie called with the news. Joanna picked up the phone, saw Sylvie’s name on the caller ID, and quickly passed it to Charles without picking up first, feeling too shy and intrusive to talk to Sylvie herself. Charles took the phone, waited, and then pushed back the covers, slid on his slippers, and padded out of the room. “Now wait, Mom,” he said as he walked down the hall. “Just a second. He said what? And that has to do with us … how?”

Charles came back to the bedroom a little later, his face ashen. The phone was in his limp right hand; his left hand raked through his hair. Joanna knew right away something was wrong. She also felt a twinge of annoyance that he’d gotten up from the bed to have the conversation away from her. Why didn’t he feel comfortable with her listening? They’d been married for six months; when would these boundaries between them go away?

“There’s some sort of trouble with my brother at school,” was all Charles had said. He’d climbed back into bed and turned the television to a tennis match, cranking the volume high. She’d pressed him for information, but he hadn’t told her much else, staring glazed-eyed at the screen. Most of the details were still tangled in Joanna’s mind. She didn’t understand whether there was any evidence that hazing had happened, or whether the school could point fingers at Scott and, by association, Sylvie, or what would happen if they did. Nor did she know if Charles believed, deep down, that Scott was capable of such a thing. He hadn’t said one way or the other.

I
t was the next day, as they were on their way to Charles’s childhood home, when Joanna dared to bring it up again. “So, is your mom worried about her place on the board?” she asked. Charles gave her a sidelong glance. “Why would she be worried?” Joanna sighed. Fine, he was going to make her spell this out. “Because of that boy’s suicide. Because of—you know—what people are saying. I thought you said the school was superjudgmental. If one family member’s bad, they’re all blacklisted.”
“Why would you think that?” Charles said.

“I don’t know,” she said, adding, “I didn’t go to that school, Charles. Remember? I don’t know what to think about it.”
“Well, you should know better than to think that.”
Charles had recently had his hair cut, the ends now hung bluntly

just above his ears, reminding her of the crisp bristles of a broom. He still went to the same barber who’d cut his hair when he was a boy. He was fiercely loyal in that way, patronizing the same business establishments for years, diligently keeping in touch with old prep-school friends, and even remaining faithful to inanimate, unresponsive things, such as old jogging routes and brands of breakfast cereals.

“And anyway, I don’t think it’s going to go very far. It’s just a stupid rumor,” Charles said as they swept past a large vacant lot that sold Christmas trees in December. “You know how kids talk.”

They turned up the winding street that eventually led to Sylvie’s house. She had invited them over for dessert that evening. Charles had announced the invitation only an hour ago upon coming home from work; a sharp contrast to the protocol by which Sylvie usually summoned them for visits—e-mailing them days ahead of time, negotiating both their schedules to see when was best for all. Sylvie wasn’t the type to demand they come only when it suited her. That was Joanna’s mother’s territory. If Joanna had to make a guess—and she always had to guess because none of the Bates-McAllisters would ever tell her directly—she’d say that today’s invitation was a response to whatever the situation was with the wrestlers.

Joanna sat back in the passenger seat, letting the iPod she’d been fiddling with fall to her lap. “So what happened, anyway? How’d the boy kill himself?”

“I don’t know,” Charles answered.
“Your mom didn’t tell you?”
“I don’t think she knows, either.”
“Was there a suicide note?”
“No. They don’t even know if it’s a suicide. They’re doing an autopsy to find out.”

Twelve to Murder (A Mac Faraday Mystery) by Carr, Lauren
And I Trusted You by Jamela
A Woman Scorned by Liz Carlyle
Fatalis by Jeff Rovin
It's A Crime by Hansen, C.E.
Long Way Down (A Gus Dury crime thriller) by Black, Tony
Beloved Beast by Greiman, Lois
Lucky Love by Nicola Marsh
The Dressmaker by Rosalie Ham
Belgrave Square by Anne Perry
Our partner